Wow!  Talk about topical!  Exodus is about Cadmus’ plan to forcibly deport aliens back to space; and it makes no attempts hide what it’s intention is (made obvious by two biting comments from Snapper Carr.) Kara and the DEO struggle to track down Cadmus, meanwhile Cadmus has wasted no time in abducting alien citizens to file away for a one way trip back to space.  It opens an interesting line of questioning.  What are they sending aliens back to, how do they know it’s not just death waiting for them? Well, duh.  Those are precisely the kinds of questions that Supergirl wants you to ask.  “Exodus” is doing exactly what sci-fi is supposed to do, creating 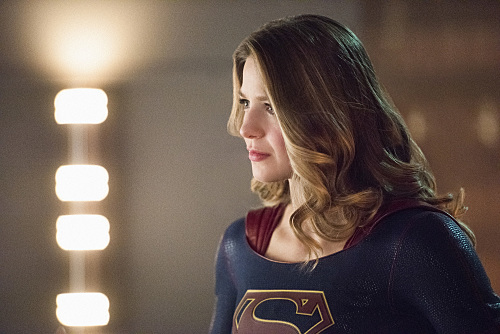 supplementary realities to test real world social and philosophical ideas against.  Basically, “Exodus” is outrageous, but it’s not far off from real world policies in regard to racism and xenophobia.  Dean Cain returns as Jeremiah Danvers; but all that conflict and confusion relating to his motives is instead just pure confusion.; they make no sense.  There’s no time to explore them in depth however, which is especially aggravating because we’re still not even sure what side he’s on.  Alex’ conflict ends up being a much more substantial storyline.  Chyler Leigh gives the perspective passion that doesn’t discount the character’s intelligence.  Her actions are driven by desperation and emotion and but they aren’t without strategy and contingency.  Kara on the other hand struggles once again between doing the right thing because she knows it’s the right thing, and playing the same news game.  I gotta say, this one surprised me.  “Exodus” makes some very valid and well thought out points about modern journalism, and the systems of checks and balances that go in to them.  Although Kara is an intelligent character, she’s still young and idealistic and sometimes it’s just not as easy as “doing the right thing” and it’s about time that that distinction was made.

“The Wrath of Savitar” is a fantastic episode about Wally, shame it’s not a fantastic episode for Wally.  Savitar is assaulting Wally with hallucination after hallucination taunting and manipulating him to some unseen end while Barry blinded by fear is distracted to the point of negligence.  Make no mistake, Wally is the tragic hero; but if we’re going by mythological archetypes, Barry is the mad king who orchestrates the fall.  We find just how deep that fear has gone and what it’s led Barry to do in it’s name.  Everything from weaponizing Wally’s talent, proposing to Iris, and using Julian has all been done by a desperate and petrified Barry.  Suddenly all those breakfasts and surprises for Iris seem more like penance than affection.  It’s all been about him though, and while “Wrath of Savitar” is more about 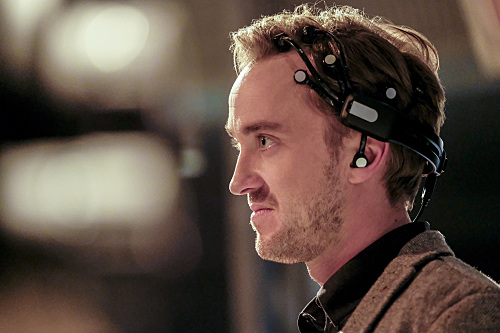 Wally than Barry in that regard, it still ripples across the entire season as Flashpoint is brought up once again and a few hints are dropped as to Savitar’s true identity; laying the groundwork for what so far seems to be a hat trick of compelling big bads.  Ulterior motives also seem to be in order for the budding relationship between Julian and Caitlin who is forced to admit that her desire to have Julian around is motivated primarily by practical reasons relating to her powers.  Ironically, this level of selfishness that’s added to her character is even more effective as a compelling catalyst for the darkness she’s so scared to confront.  It’s not given enough time to propagate, so it’s barely even a sidenote, but considering how few compelling moments in the series involve Caitlin, or her character’s development for that matter, I thought it was worth noting.  It’s the final scenes that make the lasting impression though.  Wally being sucked in to the speed force as his costume is destroyed is masterfully framed.  It leaves a lasting impression, and it’s a scene that only The Flash could provide the context for; and every scene after it is made more powerful.  I talked in my last review about giving up ground to the villains, and this isn’t that.  This is a loss, and it feels like such.  The reason it succeeds as a powerful loss though is written all over Grant Gustin’s face in the final scene.  Now then…dinosaurs

Evil Rip, takes control of the ship, and activates a self destruct and also destroys the compass or whatever it is.  Jax performs a hard reset causing the ship to crash at the oldest known coordinates which happens to be the very year that Ray was trapped in when Rip scattered the Legends across time.  The ship loses a device during the crash, which makes it work so Team A has to go and find it.  Meanwhile, Team B realizes that they have exactly what they need to reprogram Rip right there on the ship, so they decide to use that to put Jax and Sara inside of Evil Rip’s mind in order to change him in to Not So Evil Rip.  Once again Legends’ biggest problem is that the most interesting aspects of each of these storylines are not the primary focus.  Ray brings up Nate and Amaya’s relationship 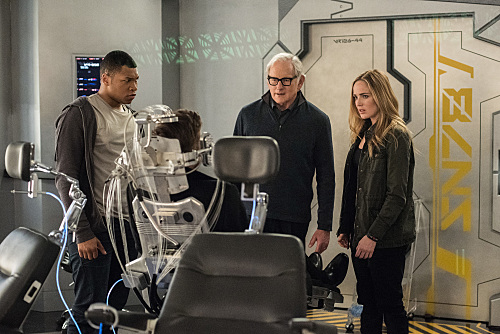 in regards to Mari McCabe’s (The Vixen of the present) future.  It provides a perspective that only Legends’ can capitalize on when it comes to the hand of tragedy shaping the future, and the doom that not only can but should befall one if the main characters.  I’ve hammered the Nate and Amaya relationship as being obligatory and uninspiring or even realistic but this is a perspective worth noting.  Nate’s knowledge of Amaya’s future adds an interesting dynamic to their relationship and I’d love to see how this gets explored later on.  Mick comments on Stein not considering Jax’ independence and capabilities or even Stein’s impending mortality.  Finally, Rip being trapped in his own mind only maintains a semblance of control and sanity with the help of a physical construction of the Waverider’s AI, Gideon.  Not only does Amy Pemberton make her live action debut as Gideon, but her having a physical form raises fascinating questions about the nature of her attachment to Rip Hunter.  On the surface however, these storylines also suffer from the same problems Legends always does.  Bland, unimpactful scenes that range from being poorly framed, unfortunately acted, and sometimes just weakly constructed from a plot standpoint.  I like Legends’ characters and I honestly believe that the series has to potential to tell stories that the other three DC shows can’t; but despite posing a handful of thought provoking questions and situations, “Land of the Lost” is just more of the exact same.

Final Word: I’m just gonna come out and say it.  Flash’s “Wrath of Savitar” was the absolute best of the week and even the season.  The final scenes were some of The Flash’s most powerful as well.  Wally’s storyline has been very impressive since his character was first introduced, and the Savitar storyline has allowed for him to have an arc that will most likely be instrumental in to shaping him in to his legendary comic book counterpart.  Supergirl also played with some big ideas and heavy themes, most of which drew powerful parallels to real world issues, but the Cadmus storyline has only occasionally been able to project nuance and has more often than not been too evil for it’s own sake to take seriously (It’s kind of scary that they’re drawing so much inspiration from real life, and that still makes them too evil to be taken seriously…) Legends is just Legends once again, very few new ideas and less given room to grow.  Rip’s return is a welcome change for the show, and while I’ll miss Arthur Darville playing the most compelling villain of the series to date, I’m eager to see his talents return to the driver’s seat.  Maybe he can keep the series from crashing and burning.