CW’s new superhero epic turns out to be bigger on the inside.

DC’s Legends of Tomorrow is the latest spinoff from the CW team behind both Flash and Arrow. Concept-wise, it is a much more ambitious property than either of the two single hero series, as it casts a collection of characters and concepts that received their start from Flash and Arrow storylines. First and foremost, though, Legends of Tomorrow is the kind of high-concept sci-fi adventure that takes influence from Star Trek, Guardians of the Galaxy, and yes Doctor Who. On that note, we should probably address the elephant in the room. The series centers around Rip Hunter, a “Time Master” from the year 2166 who is tasked with a crusade to weaken and defeat the evil dictator known as Vandal Savage; so it’s important to get all of this out of the way before we really crack this particular walnut open.

Rip Hunter, Time Master
Yes, Rip Hunter is very similar to the character of The Doctor, which is made all the more evident by the casting of Doctor Who alumni Arthur 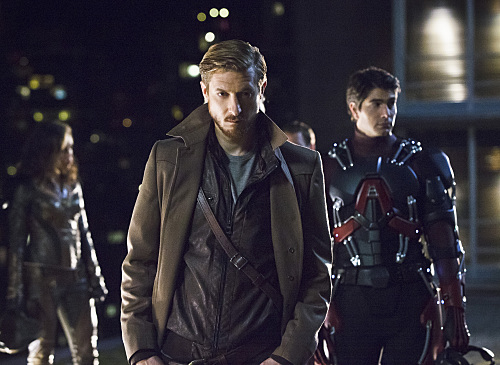 Darvill in the role. This is all kind of obvious, but it’s to be expected as the showrunners have come out and cited Doctor Who as one of the primary influences of the series. As a fan of Doctor Who, I found these connections to be entirely complimentary rather than derivative. The thing that makes Rip Hunter such an intriguing character is how flawed and human he actually is. This flaw of humanity is a constant theme throughout the episode for all the Legends, but the reason Rip’s flaws are so significant is because in many ways he is the guide for both the characters and the audience. He’s an example of what happens when Vergil is just as lost as Dante.

The Fateful Eight
Every one of our heroes brings not only a unique power set and personality to the team, but also a different background, alignment, and aptitude. This is important because not on 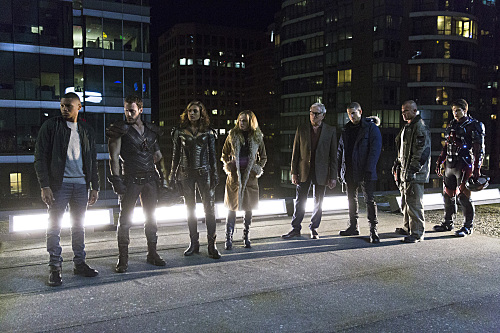 ly does it highlight the differences between the problem-solving styles of the hero and the villain when they share a goal; it also emphasizes the sociological issues that can arise when differing egos and backgrounds are forced to not only interact but cooperate as well. The episode takes the time to give an equal amount of attention to each team member’s own process of making their decision about Hunter’s proposal. Each one, like the introduction, fits the characters and their backgrounds and sensibilities. Some are serious and dramatic, some are humorous and lighthearted, but all of them lay out the motivation for each member in a way that makes sense and encourages the audience to invest in that decision.

“Groovy.”
The episode takes place primarily in the 70’s so it was necessary to make the audience feel like the characters are really interacting with that time period in a way that’s convincing yet subtle. Luckily, the atmosphere is successfully constructed by a shift in not just the music and wardrobe but also color and tone. The bright colors reflect the innocence of the time as well as the liveliness of the youth of the day and the desire to get back to a more natural life. What makes this so interesting is the culture contrast between that life and the coldness and nihilism of Rip Hunter’s future as evidenced by the sterile environment of the Waverider and Rip Hunter’s indifference at his 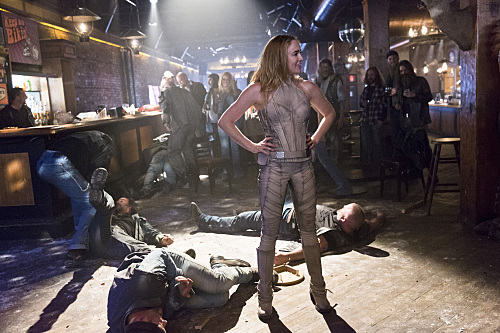 incredible surroundings. As Rip, Kendra, Martin, and Carter all take the plot by the handles to forward their primary objective, Sara, Leonard, and Mick decide to serve up some good old-fashioned shenanigans. This split allows the plot to continue to drive forward at a steady pace while still offering a stimulating reprieve to keep the drama from dragging down the fun. The bar brawl caused by Team B is indeed a fun detraction from the plot and an ideal way to characterize the roughest members of the Legends. There are plenty of gags relating to the time period, mostly relayed by Mick Rory (Dominic Purcell). The fight itself is cool, but the setup is flimsy and formulaic. The most interesting aspect of the scene comes from Sara’s flexible sexuality clashing against a figure of male dominance at a time when that was a much more prominent than it is today. It isn’t played to its fullest of course, as it just acts as a setup to a typical barroom brawl, but the idea being touched upon introduces the possibilities for culture clashes that could take place over the course of the series, opening the floor to other sociological conflicts that have plagued human histories such as racism, sexism, homophobia, xenophobia, and other forms of ignorance and intolerance.

“The Poetry of War”

The fight scenes are chaotic. They look to be people doing martial arts on the ground, and people throwing energy in the air, with no one’s personality coming across effectively. It doesn’t really feel like anything is connected in any way beyond happening simultaneously. We don’t see a progression nor a cohesion. This is by far my biggest gripe about what I have seen so far. Fight scenes are supposed to tell a story if there’s no rhythm to a fight than there’s not a reason to be invested. The biggest issue here is the scale. Unlike the excellent fight scene at the end of season 2 of Arrow, which saw two armies clashing, this is a situation where the chaos being shown isn’t conducive with the amount of people on screen. Eight good guys puts us at the crossroads between too little and too many. There are too little fighters to make the chaos overwhelming, and there’s way too much empty space between each conflict, so it’s easy to pull apart. However, there are far too many different actions occurring on screen simultaneously. The eye is pulled from fighter to fighter without being able to focus on any one for very long.  The fighting just doesn’t connect.  Instead, it just seems to happen.

DC’s Legends of Tomorrow’s Pilot Part 1 lobs a lot over the plate, but can’t stop a few strays. There are twists upon twists, as a well as a dynamic shift that creates a vacuum in the third act and changes the tone into something totally different. Rather than dragging things down, it builds a lot of characterization opportunities up from the foundation and creates some interesting new themes relating to trust, following your 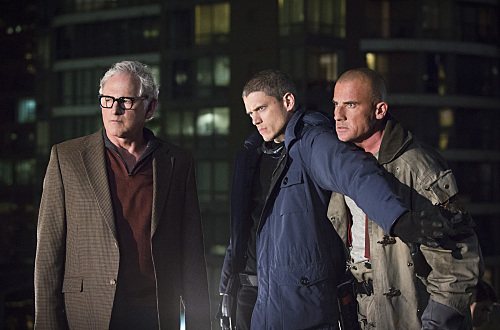 heart over your head, and manipulation. The entire shift is beautifully incubated into a full change that sends an emotional lightning bolt through the colorful cast of characters. The interactions remind me of Guardians of the Galaxy more than anything. As this dream-team attempts to navigate newfound territory with strangers and enemies, over friends, that tension ends up becoming one of the primary concepts in the show that create situations that allow both conflict and resolution to arise. You’d think with so many superhero stories doing a mixed alignment dynamic that things would get stale, but when your characters are this unusual and varied the amount of drama that can come from them is practically limitless. It has some pretty brutal things to say about fate and certain people’s impact on critical events in history, or the lack thereof. There’s also a cynical view of the modern age as viewed from the perspective of an outsider, which is an odd derision when you consider that the show is being made in the modern age. In a way, it takes time the skewer our modern age from a Utopian position, while still accepting and revealing that many flaws are simply human and nothing more.

Legends of Tomorrow Pilot Part 1 gets an 8.7/10. This is an enjoyable sci-fi adventure, but more often than not it doesn’t live up to its lofty themes. Instead, the winning number ends up being the characters. All these characters have already been established, so the fact that so much time is spent on developing them rather than writing another origin ends up showing in the plot points that arise from their interactions and conflicts. Rip ended up being my favorite character, with his tragic story being handled in one of the best ways I’ve ever seen in a show like this. If you’re looking for a superhero show, you’ll be less excited about what Legends of Tomorrow has to offer. But if you’re looking for a sci-fi adventure with a colorful cast and a willingness to delve into some unsettling themes about existence and fate, then you need not look any further.  Then, you can just call the superheroes a bonus.