Despite the name “Fast Lane”, this week’s Flash is the payoff of character arcs that have been slowly and carefully constructed over many episodes.

Making up for lost time

Wally’s introduction to the Flash TV universe means a lot of exciting possibilities relating to his Kid Flash and Flash 2.0 personas from the comics. A lot of this is probably won’t be happening for a long time, but for now the show seems to be working to decode his character for the audience and introduce some developmental arcs for himself, alongside the other characters in the show. The main characters that this development is happening alongside of though is Joe and Iris. I’m fascinated by how much Iris has grown as a character since the show’s inception; what boggles the mind is that Iris isn’t particularly easy to like. She’s driven, responsible, and honestly a bit of a snoop at times, which I guess makes sense because all these are necessary 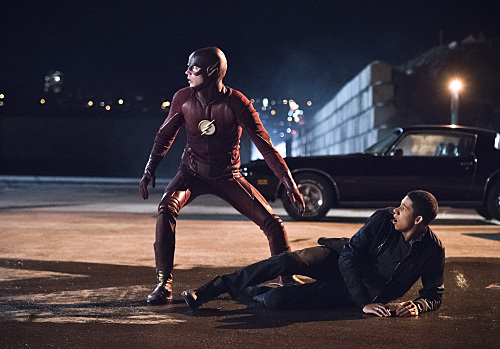 aspects for a great reporter. Despite that, as a character she has a tendency to put herself in situations where she requires assistance, but it’s always with the best of intentions. In most comics where this is just seen as a plot point, the Flash series emphasizes characters over situations, which means that even if Iris is in trouble it isn’t just to be rescued. This creates a robust dynamic for the plot to explore between Iris and Wally, as she acts with all the maturity and accountability that Wally seems to be missing. There’s also a certainty that makes the strained dynamic between Wally and Joe start to progress toward a real father and son relationship. Jesse Martin has played such a multilayered character with Joe, that to see him getting his own dedicated emotional storyline is an absolute dream come true; since we’re certain that he will make the most of it. That he does. Conflict and truth play big parts in his parenting dilemma with Wally. Barry and Iris act as avatars of the product of his own morality, and it creates a natural evolution of his and Wally’s relationship that occurs in conjunction to the plot, making the shift in the dynamic a more gradual one.

The difference is negligible

Here’s the one that really hurt though. Jesse Martin may be the Flash’s king of emotional journeys, but nobody on the show does subterfuge like Tom Cavanaugh’s Harrison Wells. I still struggle with his character’s tendency to find situations where he has to practically shout his master plan to make sure the audience is completely caught up.

Let me go off topic for a minute. This is a problem that The Flash’s creators NEED to address. There’s this very annoying tendency for the characters the recap or completely lay out all of their thoughts, feelings, or plans out loud. It’s all too apparent that this exposition is for the benefit of the audience, but there are times that it’s just plain insulting. I realize that the show has a lot of teenaged and young adult viewers, but this valuable time could be spent on characterization or narrative instead of setting a checkpoint. If the viewers have been paying attention, they’ll know that Wells is going to steal the Flash’s speed or that Barry is going to go to the Museum black tie event to catch the bad guy. These recaps are unnecessary, and oftentimes are sort of insulting to the viewer’s intelligence. Have faith in the audience, creators. If we get lost, there are plenty of context clues to get us caught up, you don’t need to slow down to wait for the stragglers.

Alright, now that that’s out of the way, we can get back to “Fast Lane”. Tom Cavanaugh’s Harry is much more nuanced in his themes than his predecessor er…Tom Cavanaugh was. His emotional turmoil is significant, and his choices are far from enviable which makes his 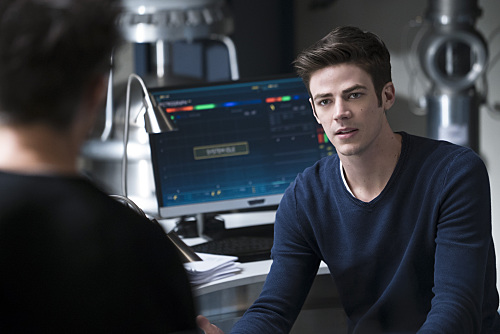 improving dynamic with Team Flash and Barry in particular such a struggle while he attempts to appease Zoom to save his daughter. As far as motivations go, daughter saving might up right up there with begrudging former employee of a chemical conglomerate goes for comic book characters, but its Cavanaugh’s ability to switch effortlessly between volatility and reservation is what makes his desperation evident over implied. His dry wit also acts as a semi-comedic aspect when contrasted to the more outspoken members of the team like Barry and especially Cisco. What really makes the Harry storyline stick out is the consequences that come from his work with Zoom, and how those consequences impact more than just himself. It’s amazing how every storyline seems to converge without seeming contrived.

“TarPit! Oh, too slow.”
Of course it wouldn’t be Flash without some random meta-human to confront. This is by far the weakest aspect of the episode, as it’s so run-of-the-mill. Tarpit’s motivation, origin, or even powers aren’t particularly interesting or well presented. The investigation techniques the team uses are quick and efficient though, and it just serves to show how good Team Flash is becoming at their job (Meta-Human Tinder). Tarpit’s design is very simple, but so effective at building a villainous presence. There’s no two ways about it, Tarpit looks very scary. He’s sort of Crow-like in his appearance, and his all powerful presence coupled with jet black eyes make for a much more menacing villain than the team usually deals with. If not terribly uninteresting from a narrative standpoint.

Final Word: “Fast Lane” is anything but. Rather than hold it back though, it uses that pace to give us some really well defined character arcs and performances that reveal themes and storylines that intersect in a gratifying way without sacrificing practicality. Character interactions are particularly entertaining, and Team Flash’s interactions in particular are natural seeming and rife with comedic timing to get the most out of the characters’ chemistry. Tarpit doesn’t bring a whole lot of new to the Flash, but he does succeed at the most basic level requirement for a villain of the week. Joe and Harry win the day though. Joe’s evolving relationship with Wally, and Iris’ substantial involvement in it give Wally the character development he deserves and gives Joe an emotional arc worthy of Jesse Martin’s acting talent. Tom Cavanaugh does what he does best, and pumps up the shady to eleven, and though it’s made painfully obvious to us what he is doing and why he is doing it, his conflict constantly shows on his face and complex emotional ideas are successfully conveyed through body language and inflection to give his perspective much more characterization than he ever received in the previous season.

“Fast Lane” gets an 8/10: Tarpit is underwhelming but effective, and exposition is still a big problem that the Flash struggles with. But Harry and Joe are both experiencing complex emotional plotlines that both Cavanaugh and Martin are chewing the hell out of.