“King Shark” turns out to be a surprisingly emotional journey for all of the members of Team Flash.

Flash fans are more than familiar with King Shark after his introduction in “The Fury of Firestorm” as a soldier in Zoom’s army of breachers.  Even though he’s been mentioned multiple times since his debut, “King Shark” is the most screentime we’ve seen for this imposing villain thus far.  Despite the increase in exposure though, “King Shark” is about more than the Flash beating the salt out of a 9 foot tall shark man/nightmare factory.  “King Shark” is (and I c 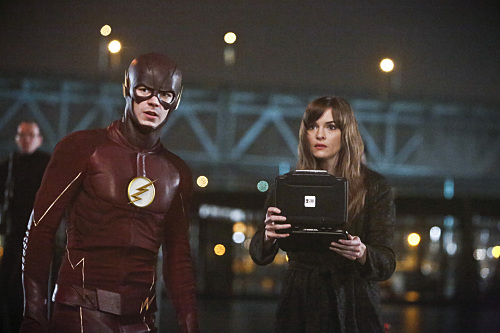 an’t believe I’m saying this) far more nuanced than all that.  The episode does indeed feature everything you might want from a face-off with a villain like King Shark, including an absolutely jaw dropping (that one wasn’t on purpose) CGI finale involving a showdown on Central City’s Bay/Sea/Ocean/Largeplotneccessarybodyofwater that looks just as cool as something with that description probably should.  In fact, all the visual effects for King Shark are incredibly well done, with the creature feature aspect not letting down the supervillain origins of this insanely difficult to present villain.  Individual gills move, the face emotes (as much as a shark person can emote, that is), and while King Shark doesn’t quite make it out of the uncanny valley the interactions with his environment are still surprisingly realistic while still showcasing his impressive physical abilities.

Yes there’s a giant sharkman rampaging across Central City, and it should be given an important place on the team’s to do list.  That doesn’t stop the Flash from picking up on some of the dangling plot threads from “Escape from Earth-2,” including completing some emotional arcs for some of the characters.  Caitlin attempts to deal with Jay’s sudden death, which works against Cisco’s attempts to hide the nature of her doppelganger from Earth-2.  This plotline gave Caitlin something profound 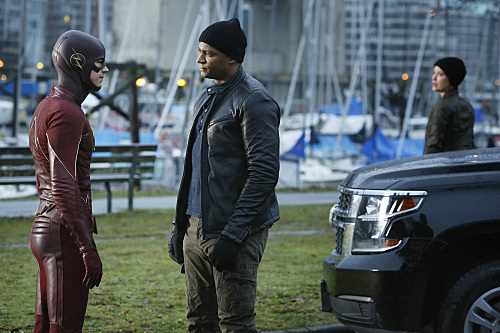 and developmental to do as she reverted back to how she was when the series first started.  It doesn’t insult the intelligence of the character though.  Her scenes with Cisco also reveal a lot of self-awareness that is usually lacking in shows like this, but it fits the scientific part of Caitlin as she comes to terms independently.  Despite the strong showing from Danielle Panabaker though, Gustin’s Barry mans the emotional crux this time around.  We’re all used to seeing Grant Gustin really emote as Barry, but nowhere is it more obvious than his heartbreaking reveal of his guilt about Earth-2.  It’s a scene that’s stirred up by the difficult interactions with Wally, creating a vaccuum between the two characters that is played off as being uncomfortable and awkward, but without being melodramatic or whiny.  The entire episode really showcases Barry’s internalization of all the problems that he and his loved ones have faced since he became the Flash.  It also gives the series a reason to show a not often seen dynamic between Barry and Diggle, allowing the chemistry between the characters a chance to grow.

Final Word: “King Shark” is not the big lumbering beatdown between a live-action Street Shark and The Flash that it threatens to be, but a powerful story that involves a lot of interpersonal friction between the characters and their choices.  The Lyla and Diggle guest appearances spice up the formula a bit, giving viewers a through way in to a tragically neglected dynamic between Barry and Diggle.  Caitlin experiences a fair amount of grief from Jay’s death, and Barry and Wally struggle to find common ground.  Despite the drama being the biggest winner here, the King Shark stuff still doesn’t disappoint.  It’s a little brief on the monster mash side, but the ending is a well executed special effects extravaganza that makes the style over substance a blessing rather than a curse.

“King Shark” gets a 8.5/10.  A shoehorned in ending along with an anticlimactic reveal of the identity of Zoom fail to make any more of this otherwise solid installment of The Flash.