“Versus Zoom” is a bit predictable, but still wholly rewarding for Flash fans.

So, Jay is Zoom. Ultimately his origin has been a bit confusing ever since it was revealed, but this episode really puts any doubts to rest. The origin of the character is a struggle to relate with. It’s so comically evil that it’s hard to see it as anything other than self parody. Contextually it’s significant to the overall story, and it’s not a bad arc that’s honestly pretty shocking (especially when the parallel between Barry and Jay’s history is made). The problem here is execution. There’s really no lead up to the moment itself, nor is there any context to pull us in. It might as well be street crime, despite it’s posturing about being a deep and personal statement. Once these scenes end though, the episode really does get going, and the consistency to quality keeps the audience on board. Some interesting things are done with Cisco here as he struggles 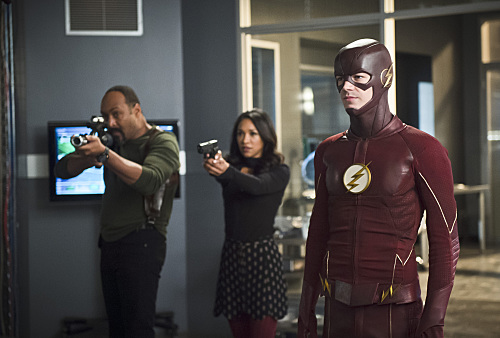 with his identity in the face of his great future and the power he is coming in to. Barry’s relation to this feeling keeps his emotional solidarity from seeming empty or patronizing. Examples that the audience is aware of are used to draw a correlation between both of their characters and their potential.

You can see Flash’s pride coming back to bite him in a big way. Though it’s obvious that it would occur at some point, it doesn’t diminish the form it takes in the kidnapping that Zoom perpetrates. This also puts Wally yet another step forward to the West’s world, seeming like it might be possible for Wally’s character to become more of a center point sooner than previously thought. What I really enjoyed though was Teddy Sears as Zoom proper. His almost Patrick Bateman level of psychopathy works in beautiful contrast with his good looks and pleasant attitude. Sears is such a seemingly good guy, that it makes his bad guy all the more chilling.

Final Word: This one is a knockout. It sets up the next episode successfully, but it also Zoom’s origin/inciting incident that gave him is powers is surprisingly satisfying. They try too hard to make Hunter’s childhood backstory dark and depressing. It fails to convey a believable level of sequential events, and without that context the story falls distressingly flat. Barry is running faster than ever before and it’s revealed tangibly instead of through dialogue. Well…there is dialogue, but the effects themselves do make him look much much faster. Barry’s attempts to reassure Cisco of his future is a great moment for both characters as it capitalizes on everything that we’ve learned about them thus far. The big Flash VS Zoom fight is no slouch either. Great effects like always, but it’s the verbal sparring that occurs throughout the episode that makes Zoom a worthwhile foe for the Flash.

“Versus Zoom” gets a 9/10. Totally Flash through and through. All the characters you love make this one a victory. The only problem is Jay’s lifetime movie childhood.