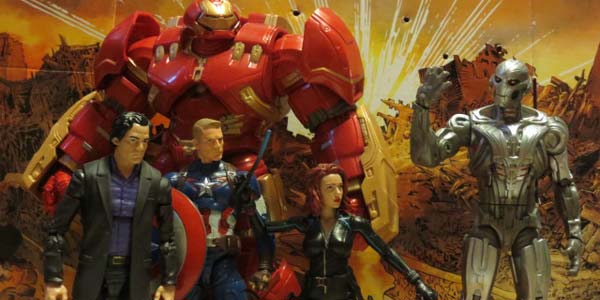 There have been some truly incredible toy lines in 2015… Here’s the best of the best.

I can’t believe another year has come and (almost) gone.  Yet here we are, at the cusp of 2016, and I’m staring at my desk full of toys yet to photograph and review.  So it seems like the perfect time to put that off for another night and run down my picks for the year’s ten best action figure toy lines.

Some toy lines this year were new, packed with promise and potential for the future… others provided closure to long-running lines… but if there was one over-arching theme in the toy world this year, it was a trend toward excellent realizations of toys we’ve been wishing for now for years, even decades.  Whether they were payoff of a project long in the works, or a left field surprise I never even imagined would become a reality, 2015 has certainly taken a lot of iconic characters and properties off my wish list, and onto my toy shelves. 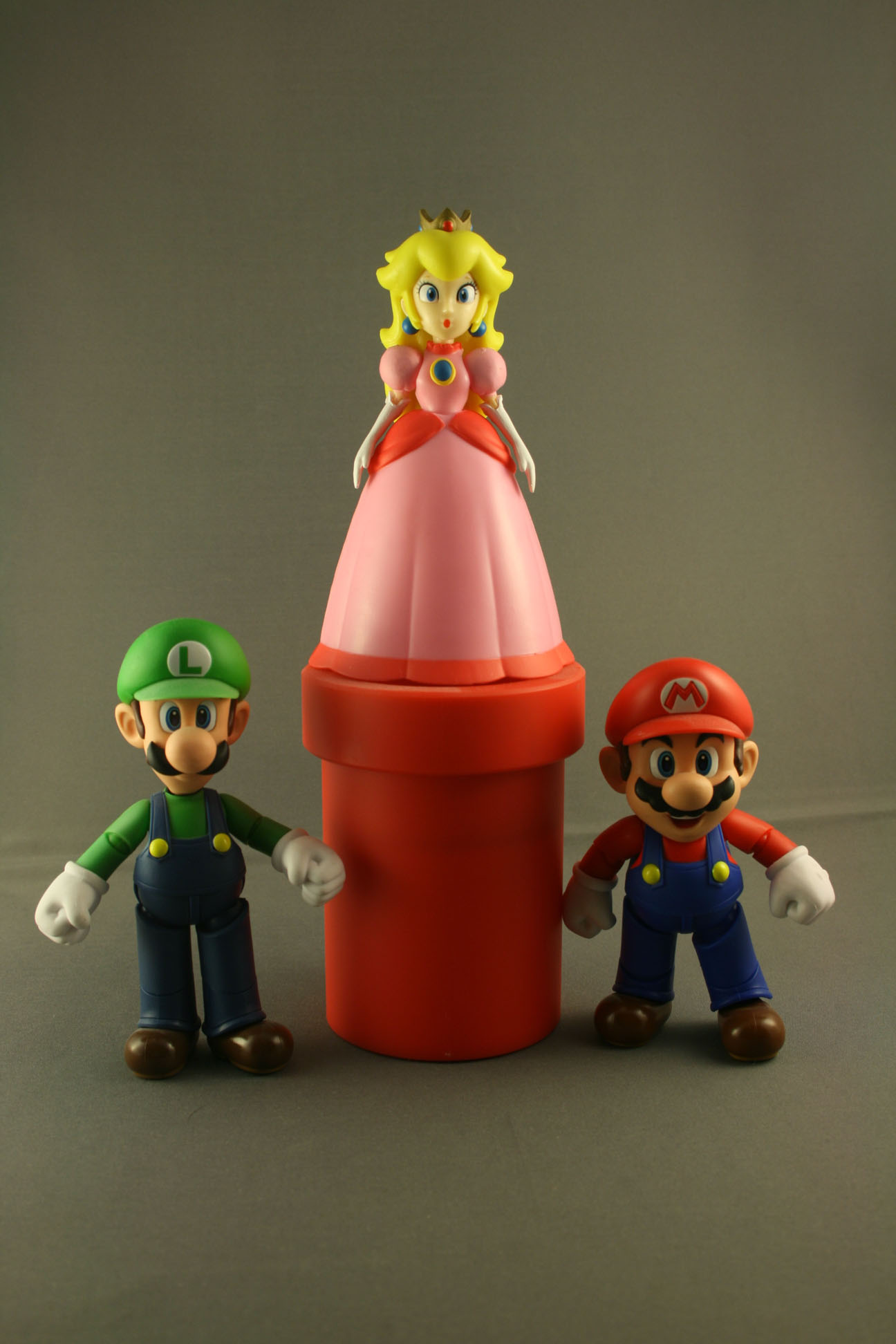 Domestic versus Import is a question that comes up a lot in terms of action figure collecting. But the two Nintendo toy lines presently at retail pose a unique scenario. Neither Bandai Tamashii Nation’s Super Mario Bros. Figuarts collection, nor Jakks Pacific’s World of Nintendo are perfect toy lines on their own, but together they are greater than the sum of their parts. Bandai continued on the success of their next-level great Mario figure with the release of Yoshi, Luigi, and some new playsets which built the world of Marion nicely. Jakks, meanwhile, offered a number of solid action figures like Toad and Princess Toadstool, as well as mini figures like the Shy Guy, all of which fit in scale perfectly with the Tamashii Nation line, adding flair and including characters who might not make the cut among the limited releases of Bandai’s line. By cherry picking both toy lines, we are really starting to see the ultimate Mario Bros. toy line, for the first time in Nintendo’s history, and that’s truly exciting.

9. Masters of the Universe Classics (Mattel) 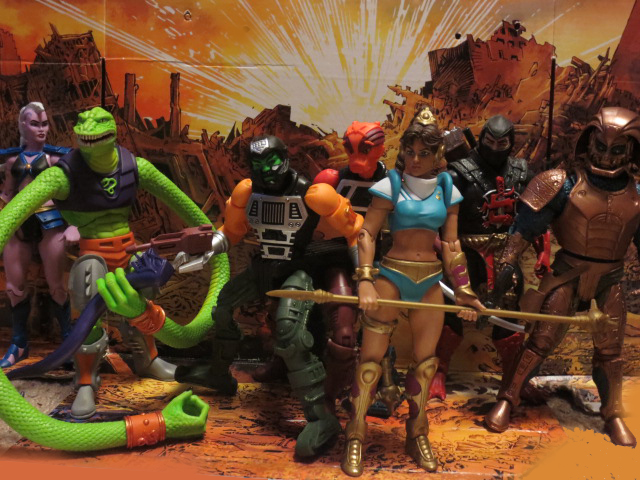 2015 brought about closure to one of the longest running collector driven toy lines out there, as Mattel tied up many of the loose ends of their Masters of the Universe Classics collection. The final year of the subscription finished off the trio of movie figures, the Princess of Power, Horde, and Snake Men sub sets, and delivered some first-time characters to the He-Man toy line, including Mara from New Adventures and Skeletor’s Hover Bots from the classic FilMation cartoon. Despite the departure of Scott Neitlich in late 2014, Mattel’s team didn’t miss a beat, and while there are still some vintage figures who have yet to join the modern era, all-time greats like Multi-Bot, Ninjor, and the afformentioned Mara made this year a great send off for this comprehensive toy line. 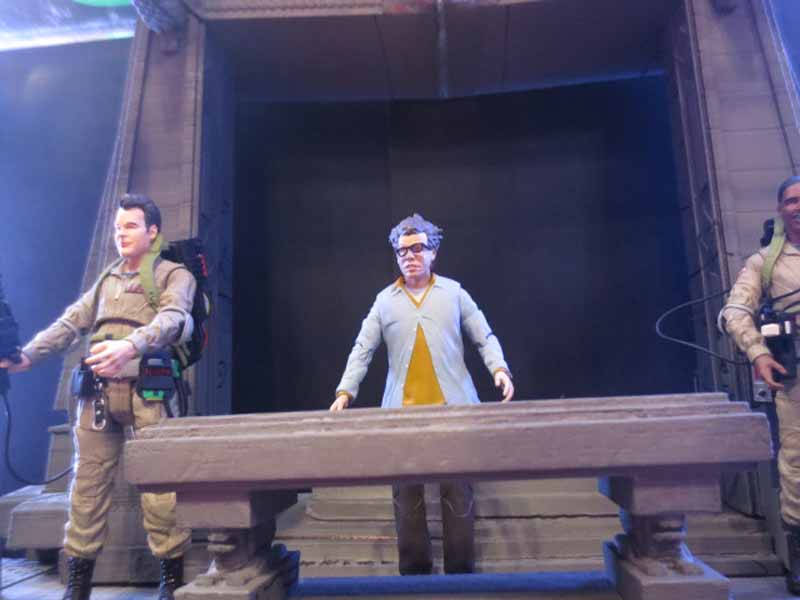 Here’s a late-comer to the year. Yes, the first wave of Diamond Select’s Ghostbusters is just now starting to hit retail, but what we’ve seen of this line is so well executed and so ambitious, it’s impossible not to earn a spot on the best toy lines of the year. The all new 7″ figures feature amazing detail and lots of really cool features including alternate hands, accessories, and of course that base– by collecting DST’s entire Ghostbusters line, you can build an in-scale diorama of the rooftop setting from the finale of the first movie! It’s one of DST’s biggest and most elaborate concepts to date, and it’s fantastic to see the individual figures each promise to be worth the value of such an ambitious display concept. 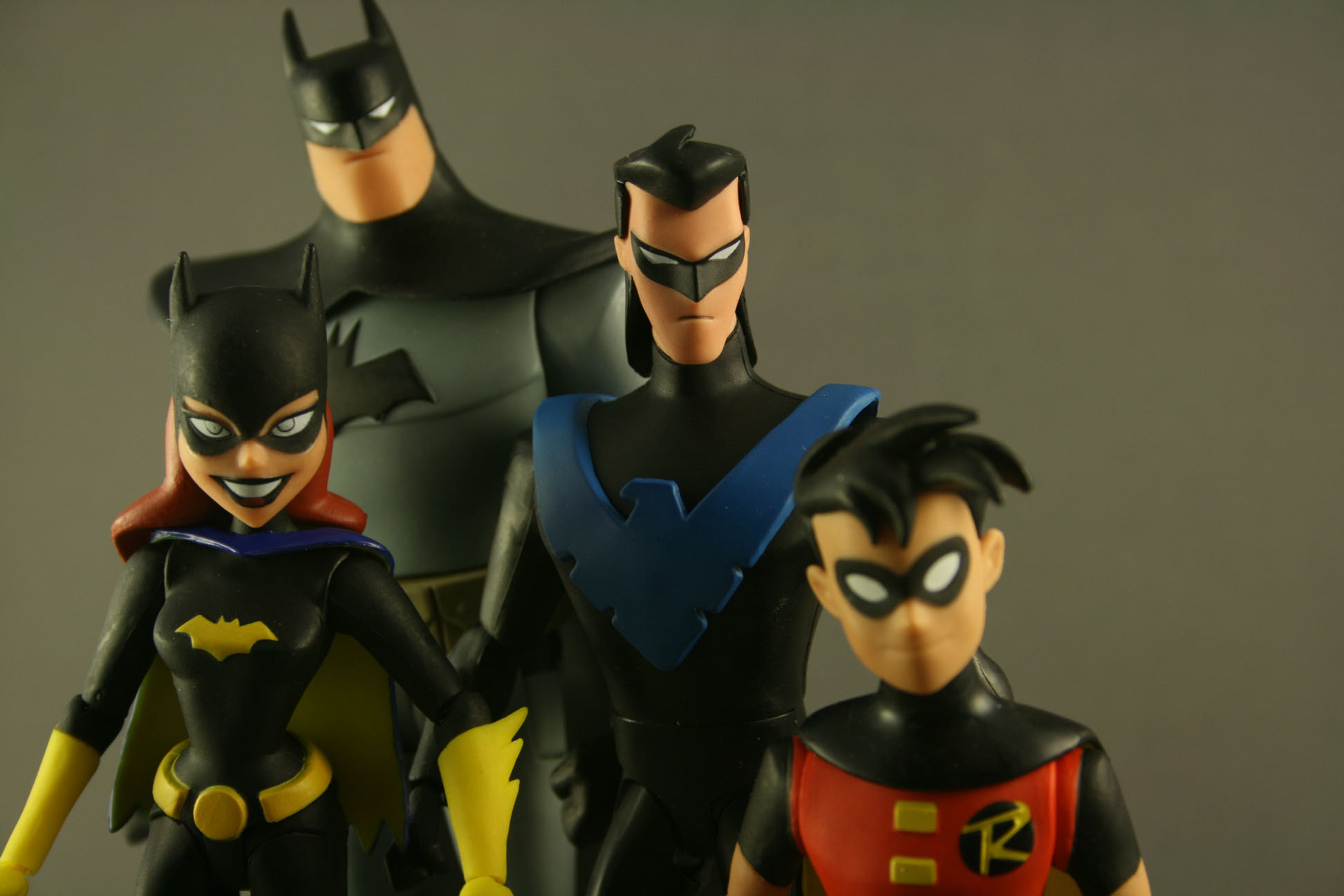 Aesthetics have never been a problem for DC Collectibles’ Bruce Timm-inspired Batman Animated series. Since it launched in 2014, every figure has offered a great 3D translation of Timm’s stylized, iconic design work, and the loads of accessories and alternate parts packed with each figure make them a solid value. But with 2015’s lineup, DC Collectibles focused on their biggest flaw in the first year– quality control– and what we saw was the most impressive turn-around ever. Gone were the brittle and stuck joints that caused breakage and paint chipping in the earlier figures. This year’s crop of figures were sturdy, held their poses, and felt much more durable and solid than their older counterparts. Coupled with a diverse mix of characters major and minor from The Animated Series and New Adventures, DC Collectibles’ line has to be considered one of the year’s finest, even before you remember they released an in-scale Batmobile as well! 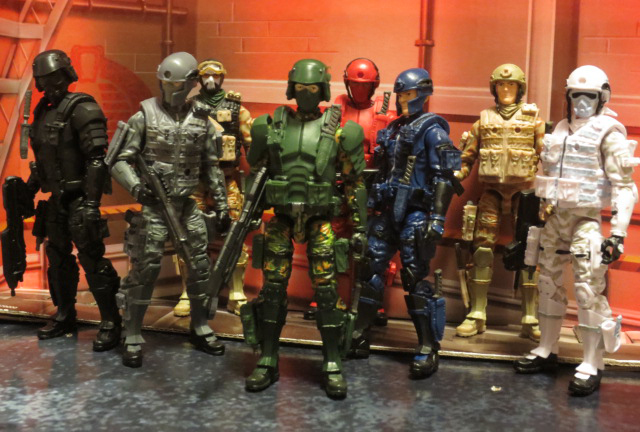 I had high hopes for Marauder, Inc’s first venture into 3.75″ action figures, and Marauder Task Force did not disappoint. On their own, the figures are fantastic, featuring great sculpting and engineering courtesy of Boss Fight Studio, lots of useful articulation, and a novel concept featuring fully modular and customizable weapons, accessories and gear (Marauder’s specialty). But timing was also on Marauder’s side in 2015. As Hasbro’s GI Joe spent most of the year languishing in relative obscurity, the Marauder Task Force filled that void, offering creative and cool alternatives for all of us 3.75″ military toy collectors. 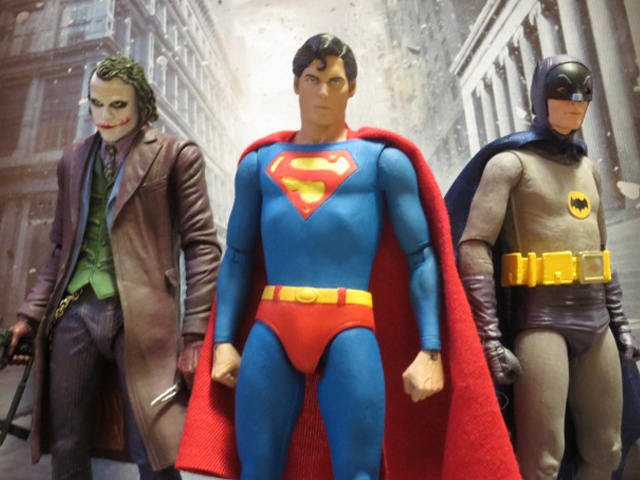 How does NECA top their surprise release of a perfect 7″ Michael Keaton Batman figure from 2014? By offering a trio of perfect DC movie figures in the same scale this year! For the second year in a row, NECA snuck some amazing DC figures out to retail, and the sized-down Superman, Joker and 66 Batman are all incredible. Highly detailed, loaded with fun accessories, and painstakingly authentic to their big screen counterparts, these three figures are amazing in their own right. But factoring in the fun reveal by NECA of this previously un-announced trio the same day they shipped to retailers brought a true sense of energy and excitement to the toy community like few other releases in 2015. 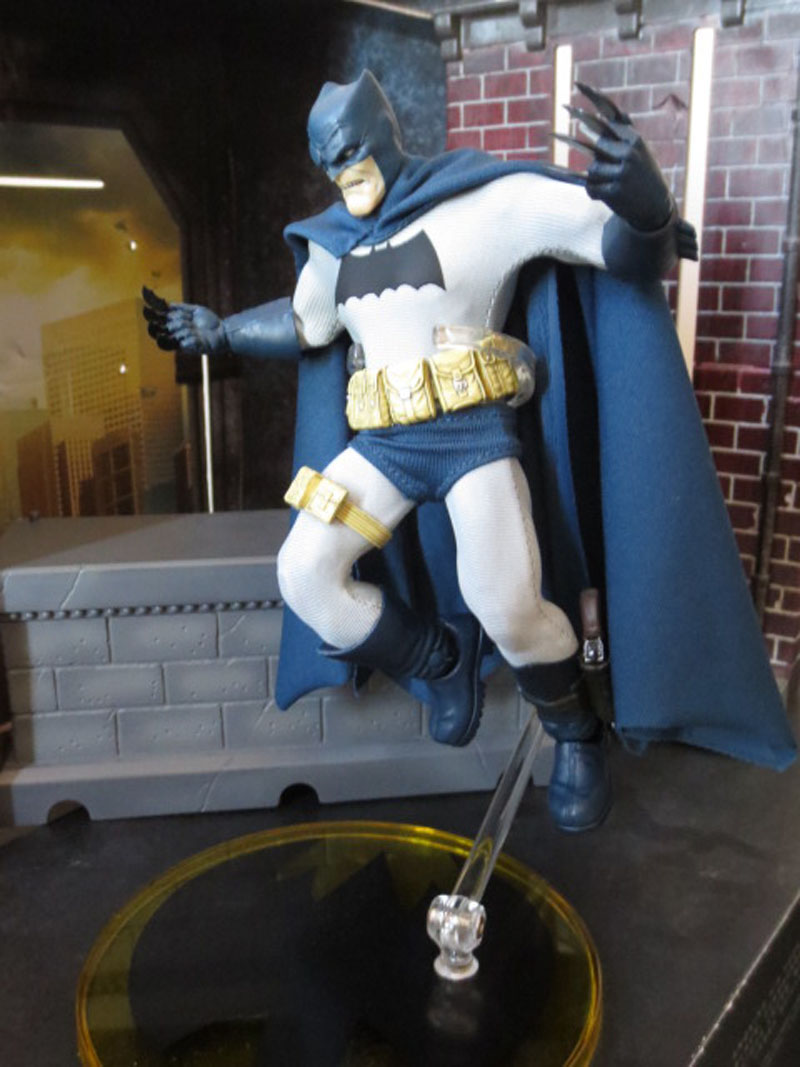 One of the most eagerly anticipated lines of the year, Mezco’s One:12 Collective made a splash with their incredible Frank Miller inspired Batman figure in the front half of the year. A few clever variants of the Dark Knight offered some diversity in the lineup, which increased more recently with the equally great Judge Dredd, as well as the Mutant Leader, a companion figure to the Dark Knight Batman. The One:12 figures not only look great, but feature some of the best engineering I’ve seen on a 6″ scale figure, and quite possibly the best soft goods application ever rendered for this scale. An impressive range of accessories, alternate heads and hands, display stands and a few other surprises made this high end series one line that absolutely lived up to the hype. 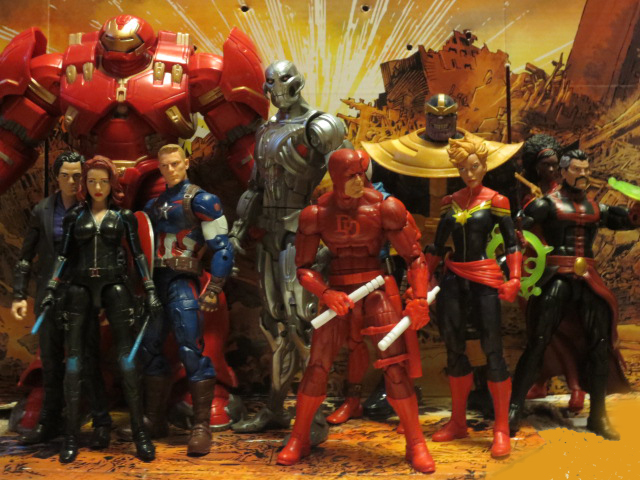 The longest-running toy line on this list enjoyed another banner year, as Hasbro built out the Avengers, Ant-Man and Spider-Man corners of the Marvel Universe, alongside a new crop of movie-inspired figures. While it may seem mind boggling, this 10-plus year old line released more figures in 2015 than any year previous, and the diversity on display extended well beyond the comic book versus movie source material. Marvel Legends was quite possibly the year’s most gender-balanced toy line, with at least one female character featured in every wave of figures and each major box set. That’s HUGE, and the line’s continued success proves that the awful myth of gender barriers in terms of toy sales is an utter lie. It’s cool that I’ve got a killer Thanos and a movie accurate Ultron, and Magik and Hellcat (!!!) this year, for sure… but the fact that Marvel Legends is using its muscle to advance social consciousness in the toy aisle is even more thrilling. 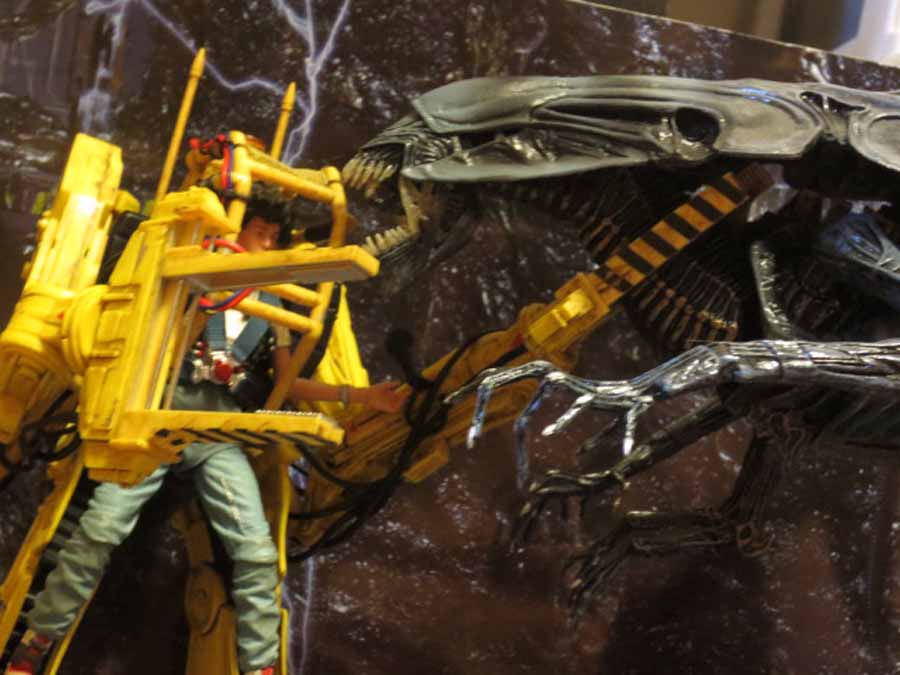 Year three of NECA’s seminal Aliens toy line was far and away their best, most exciting yet.  Not only did we see the collection grow in unique new areas of the Aliens universe (including our first figure from Alien 3, as well as a whole wave of toys based on the video game Isolation), but we finally saw Sigourney Weaver’s Ellen Ripley join the series.  Her inclusion was always the key to this line’s success, and NECA wasted no time making the most of their win in terms of her likeness, releasing three of Ripley’s most iconic looks in the toy line, along with her Power Loader from Aliens.  I could barely fathom a scenario in which Kane and Dallas in their wonderful, Moebius-designed Pressure Suits would be considered anything but the coolest thing in this lineup… but NECA’s series was so damn good in 2015, those fantastic figures barely break the top five best Aliens toys of the year. 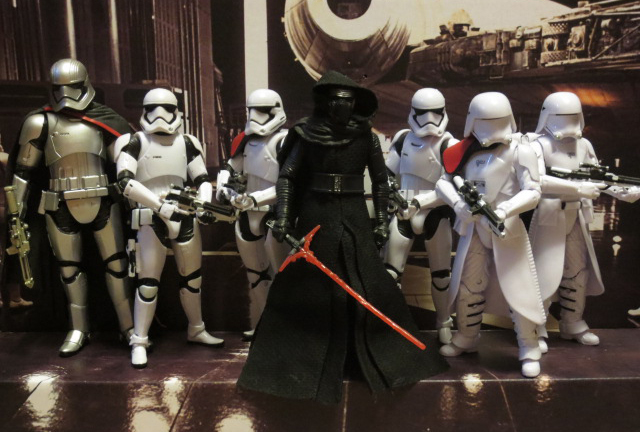 Of course.  Say what you will about the 5 Point of Articulation basic figures (I still love them, BTW), you cannot call Hasbro’s Force Awakens toy line anything but a huge success.  Since its launch on #ForceFriday, the new Star Wars toys have flown off shelves faster than retailers can replenish them, and Hasbro has offered a diverse range of toys targeted to any fan.  Even with their limited articulation, the sculpting on the basic 3.75″ figures is outstanding, the vehicles are across the board fun, and the Black Series 6″ has included some all-time greats like the First Order Stormtrooper, Captain Phasma, and the Guavian Enforcer… not to mention the show-stopping 6″ scale Tie Fighter, which is truly a sight to behold.  With a core line still going strong four waves in, and scores of retailer exclusives (including a continuation of the super articulated 3.75″ series at Wal-Mart), the sheer scope of Hasbro’s line proves that they knew early what we all know now– Star Wars is back, in full Force (sorry).

There were SO many great toy lines, both new and old this year!  Honorable mention has to go to Game of Thrones (Dark Horse Deluxe), Vinyl Idolz (Funko), DC Icons (DC Collectibles), and Transformers: Combiner Wars (Hasbro).  In any year not this jam-packed with incredible releases, these lines would have had a guaranteed spot on this list.  That they didn’t is a credit to the fact that we truly are living in the golden age of toy collecting.