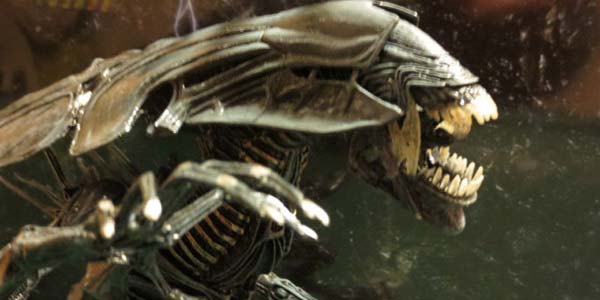 2014 saw the release of a lot of great action figures.  Here’s a rundown of the best of the best.

I told myself 2014 would be the year I dialed back on collecting toys.  Between the ever-decreasing amount of space I have for the collection and the trend toward dumbing down most mainstream, mass retail toy lines, I thought this year would be a good sort-of jumping off point.  But I was wrong– yes, many of the major companies started aggressively underwhelming with their efforts, and major retailers seemed more than happy to support the new simpler and cheaper toys by filling their aisles with them.  But not only did this loss give way for lots of exciting smaller companies to fill the void of collector-oriented figures, we also saw some amazing gems hidden among the low quality junk from the Big Two, as well.

So it turned out to be an exciting year.  And an expensive one. Looking back, there were a LOT of great figures, all of whom have earned a permanent spot in my collection… but the list below is what I consider to be the true cream of the crop, action figures so great that they belong in any collection, regardless of scale or property. 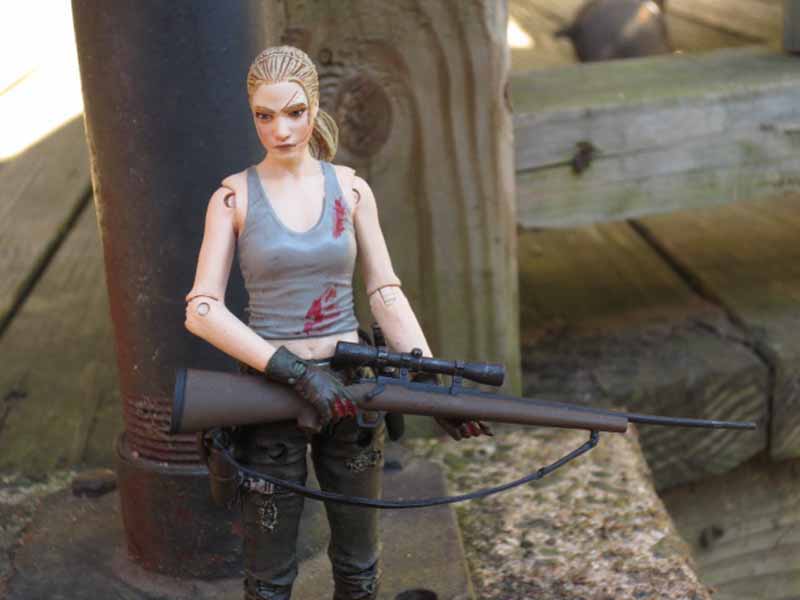 If you only know Andrea from her appearance on AMC’s Walking Dead TV show, you don’t really know Andrea.  The character, as she appears in Robert Kirkman’s comic series, is one of the best parts of the series, a strong, believable and capable woman whose arc has been consistently fascinating as her struggles in the zombie apocalypse continue.

McFarlane Toys did this great character justice with her comic book style action figure, thanks to a sculpt that looks like it was pulled straight out of artist Charlie Adlard’s sketch pad, a great range of articulation, and some awesome accessories.  Everything about this figure screams badass, as it should for Andrea. 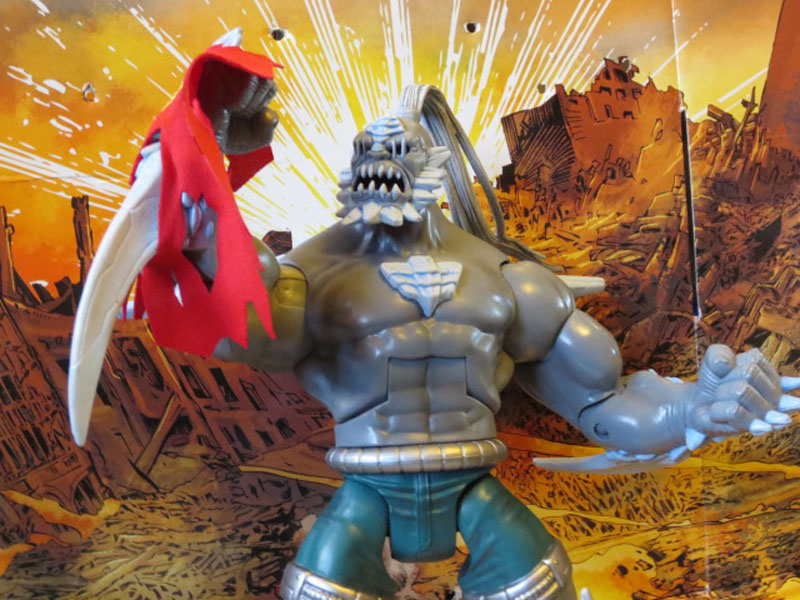 After a lot of will they/ won’t they, Mattel finally let the cat out of the bag this summer, and here we are– Doomsday Unleashed is actually here.  The final figure in the long-running DC Universe collection had a long, strange journey, but the end result was a truly outstanding action figure.  He is massive, perfectly scaled to be the intimidating presence he needs to be, and the all new sculpt by the Four Horsemen is most definitely one of their crowning achievements.  It’s always nice to see a beloved series go out on a high note, and Doomsday Unleashed does just that for Mattel’s DCU. 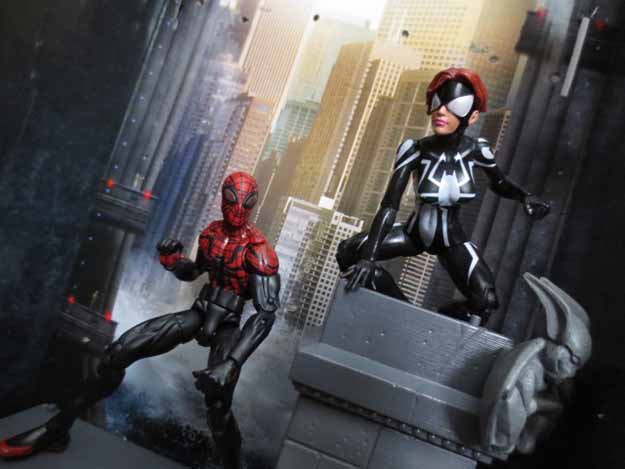 I could probably do a Top Ten list just for Marvel Legends figures this year, Hasbro did such a great job with the latest reboot of this long-running line.  But some figures stand out so much, simply for the little things they get perfectly right, and Spider-Girl from the Spider-Man Legends series does just that.  This figure features a new teen female body, which might be the best sculpt we’ve seen yet from Hasbro’s Marvel team.  Her proportions are realistic and the figure features a staggering range of motion thanks to the copious articulation, which somehow does nothing to impact the wonderful sculpt.

I’m honestly not even a huge fan of Anya Corazon, but I found myself messing around with this figure more than virtually any other Legend this year, simply because she is so well made, poseable and fun to play with. 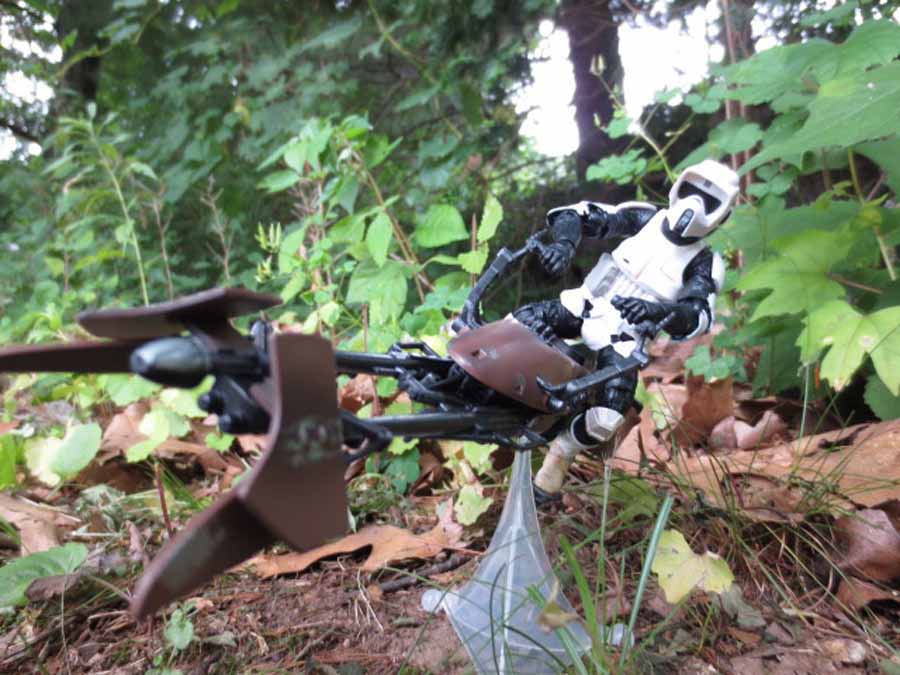 Hasbro’s Star Wars Black Series had a number of really great releases in its sophomore year.  Chewbacca, the Stormtrooper, and even Anakin Skywalker really came to life in this new scale, but for my money, the coolest Star Wars toy of the year was the deluxe Biker Scout with his Speeder Bike.  The first Black Series vehicle is perfectly on model, an outstanding sculpt that is both intricately detailed and incredibly sturdy.  I love the revolutionary display stand, which allows the bike to be displayed hovering to the sides, to the front or back, high or low off the ground, all while maintaining its center of gravity perfectly.

The Scout figure is a worthy pilot, too.  Hasbro was able to take arguably the coolest Stormtrooper armor from the Original Trilogy and create one of the best Black Series figures we’ve seen yet.  The sculpt is perfect, the articulation is excellent, and this Scout looks perfectly natural riding his bike or standing alongside his fellow Imperials. 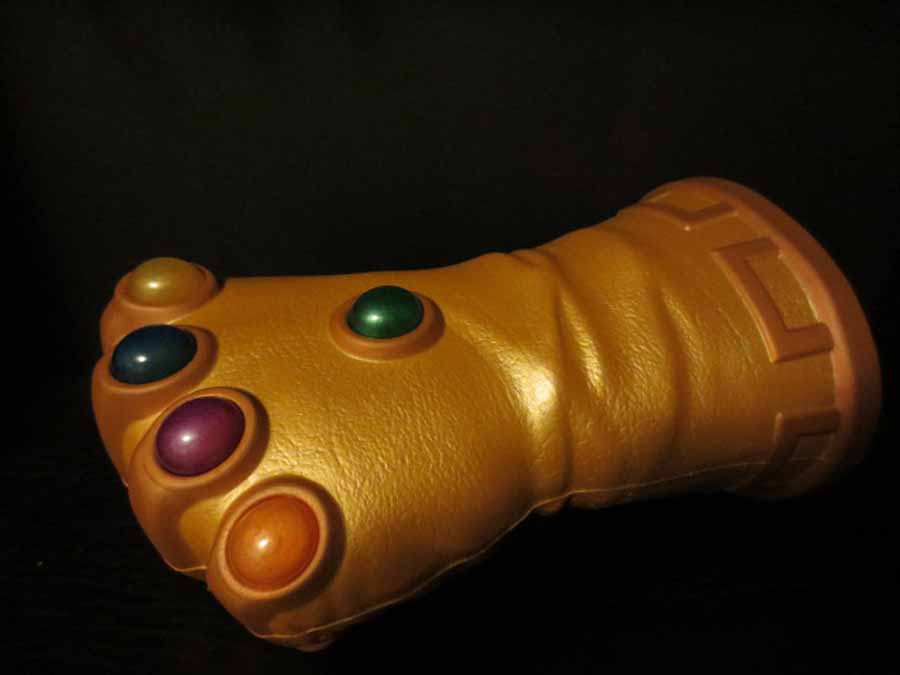 Okay, so technically this one isn’t an action figure, but Hasbro’s SDCC exclusive wearable Infinity Gauntlet is too insanely cool not to include on this list.  The ultimate weapon of mass destruction is made out of foam (think the awesome Hulk hands from Toy Biz’ heyday), but the strong, sleek sculpt and paint work make it look much more high end that it is, while remaining sturdy and easy to wear.

The plastic gems with tiny little skulls sculpted underneath are a great touch, and the handle inside the fist makes this thing very easy to hold onto.  I can’t think of many things I saw this year that I was quite as hellbent on owning than this glove, and it has truly earned its place as a gem (no pun intended) of my collection. 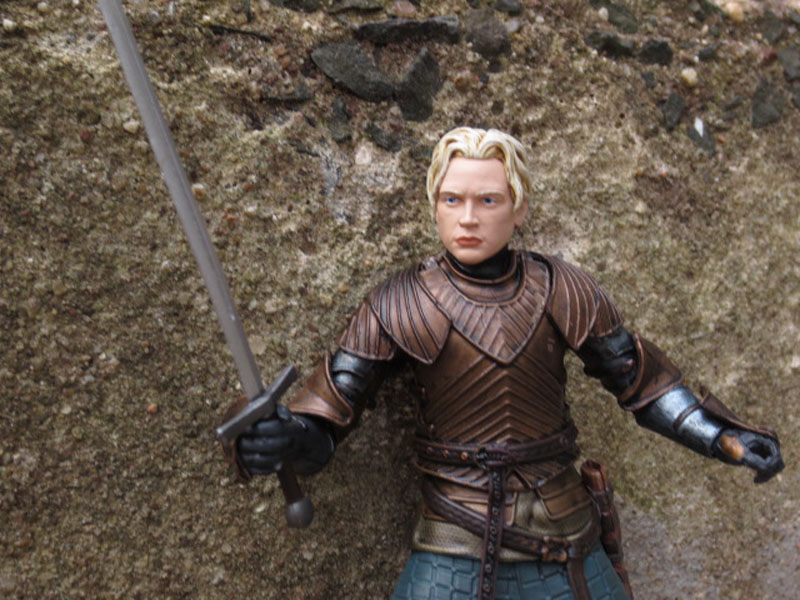 Funko’s Game of Thrones Legacy Collection was one of 2014’s most exciting surprises, delivering a wide range of movers and shakers from George RR Martin’s universe in toy form.  The whole line featured excellent, TV show accurate sculpts and well designed, fully poseable figures, but for me, Brienne of Tarth truly stood out as the best figure we’ve seen in the line thus far.

Brienne’s highly detailed armor is perfectly rendered, and the figure’s subtle paint washes truly make the sculpt come to life.  The Gwendoline Christie portrait is perfect, the most accurate likeness of any of the GOT figures, and her figure’s articulation allows for many one or two-handed sword poses.  With any luck, Funko will look to the amazing work they’ve done on the likes of Brienne and Robb Stark as they move forward with this series… if so, there will be many happy GOT fans in 2015, for sure. 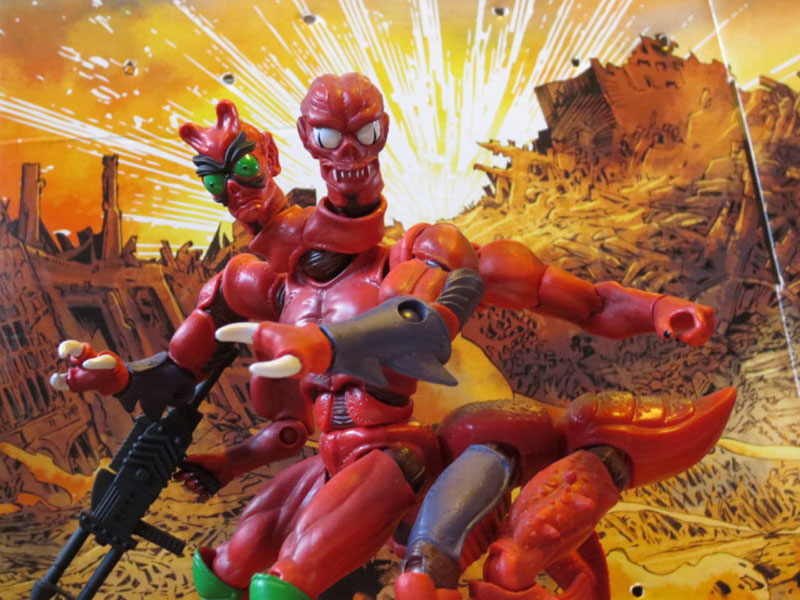 I feel that 2014 wasn’t quite what Mattel advertised in terms of Club Eternia.  Yes, the ratio of desired, core characters to useless junk was balanced much better, but it didn’t exactly feel like an “all killer, no filler” year.  But the Club most definitely had its high points– Mattel banked many of the elaborate and unique characters for these final years of the series, but they truly delivered on many of them, particularly Modulok.

The Horde creature gets a brilliant update, retaining his vintage gimmick of a completely modular body that can be combined in a multitude of ways.  All the parts are perfectly rendered by the Four Horsemen, balancing retro nostalgia and modern design aesthetics perfectly, and the joints are sturdy whether posing or swapping body parts around.  This means Modulok is both easy and FUN to play with, and that’s the real key… there have been some really cool looking toys in the MOTU collection, but none have been more fun than Modulok. 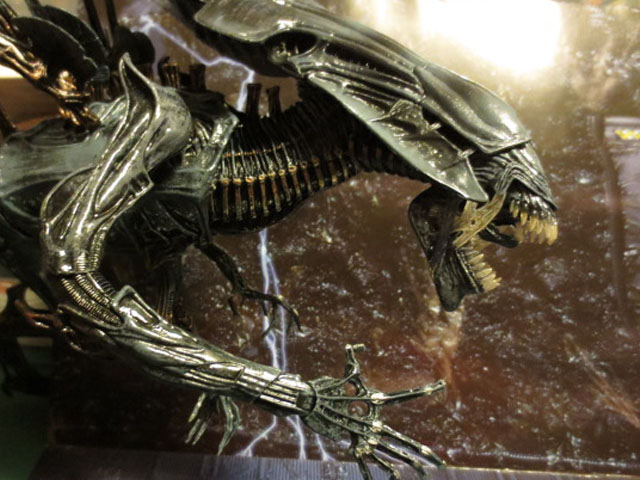 The crowning jewel of NECA’s Aliens collection is their massive and awe-striking Queen.  This beast is perfectly realized as a deluxe figure, standing nearly 12″ tall and over 20″ head-to-tail.  The sculpt is wonderful, completely screen accurate and truly terrifying, and the shiny, black and blue paint apps give this figure just the right creepy, bio mechanical look and feel.

I knew this figure would be amazing as soon as I heard NECA was committing to making it a reality, but it’s such a nice surprise for a prediction to be proven so very right. 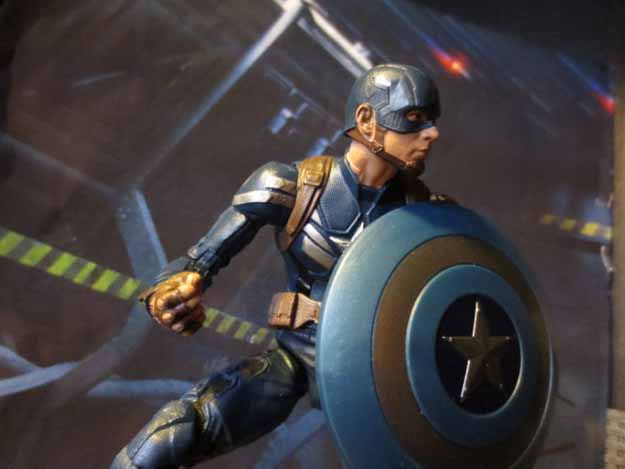 This year’s soft reboot of Marvel Legends left Hasbro with a golden opportunity– by anchoring each wave to a movie property, they expanded their design budgets, and they certainly put that extra money to good use.  The best example is Captain America, in his STRIKE suit as seen in The Winter Soldier.  This figure’s all new sculpt is perfect, with an outstanding articulation pattern, lots of costume details straight from the movie design, and a great sense of proportion– this guy strikes a hell of a silhouette!

More than any of this, though, Cap is really brought over the top by his extra parts.  On top of his omnipresent shield, this figure also includes an alternate, unmasked head, as well as alternate hands which allow Cap to point or even salute!  Each piece is very well thought out, and remarkably faithful to the character of Steve Rogers.  I love that, and it makes me absolutely adore this action figure. 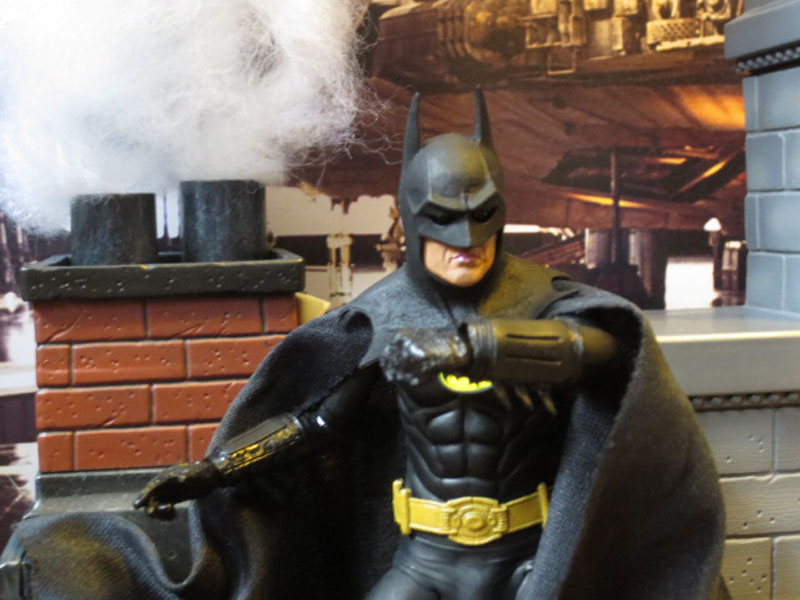 If I made a list of things I never thought I’d see happen– but really wanted to see happen– a DC comics figure by the NECA team would be way up there.  And by some combination of ingenuity, business savvy, luck and magic, we got not one but two 7″ scale Michael Keaton Batman figures from NECA this year!

I was very fond of the 8-Bit Batman, in his funky purple and blue deco as seen in the Nintendo Batman movie video game, but the movie accurate 1989 Batman is just stunning.  Not only did this seemingly impossible figure become a reality, but he’s great!  The sculpt is uncanny, with an instantly recognizable Michael Keaton portrait behind the mask.  And the design of the figure– from the solid heft of the cowl to the chest overlay– leave this figure both highly poseable and virtually seamless in terms of the sculpt.

Adding an alternate set of hands, a batarang, grappling gun, and retro Toy Biz inspired packaging only add to the value of this figure… who was already, technically “free” as a gift with the purchase of the Batman ’89 Blu Ray.  I still don’t know exactly how NECA pulled this one off, but I’m glad they did, because the end result is, hands-down, the year’s greatest action figure.