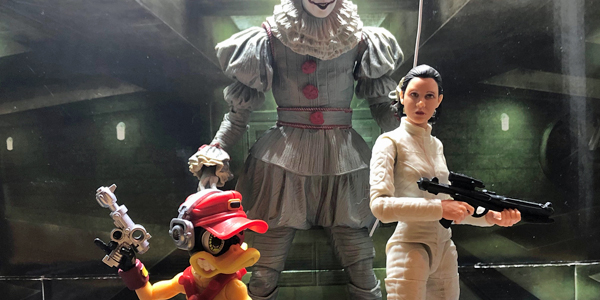 Here’s Bill’s picks for the best action figures of the year.

2018 was definitely a transition year for the toy industry, from the end of Toys R Us in the United States, to complications with overseas factories affecting toymakers both large and small, to a focus on global outreach for major companies like Hasbro.

Despite these seismic shifts in the toy world, there were a lot of incredible action figures released over the past twelve months. Here’s our picks for the best among them. 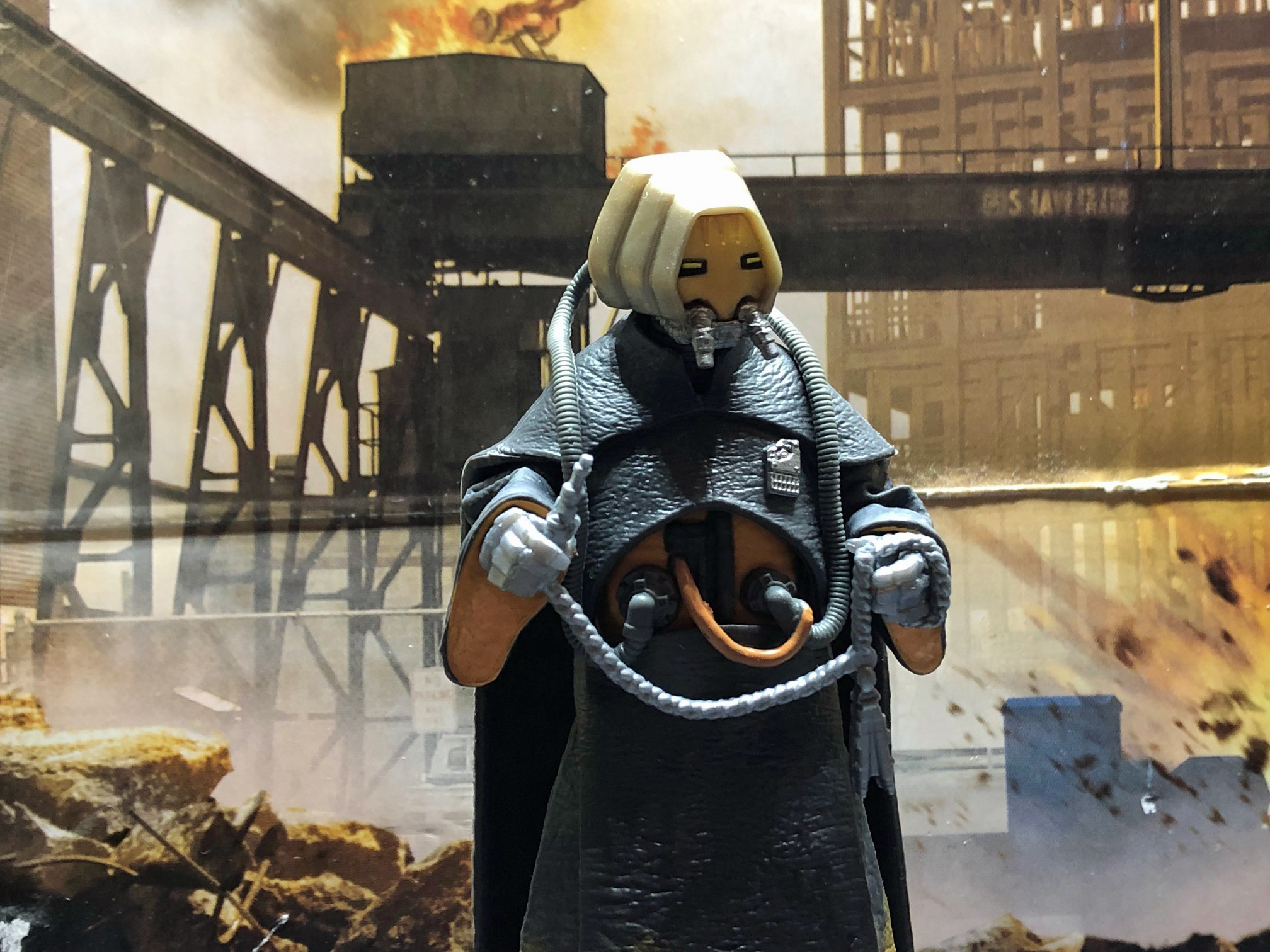 As far as I’m concerned, Hasbro’s most-improved toy line of the year was the Force Link/ basic Star Wars collection. I’ve been a fan of these 5 POA figures and vehicles for a long time, but the quality of sculpts improved dramatically in 2018, while the range of characters grew for both Solo: A Star Wars Story and other corners of the Star Wars galaxy. The best figure in this year’s line, though, isn’t Han or Lando… it’s a minor character from Solo, Quay Tolsite. The level of detail in this sculpt is outstanding, the paint work is concise, eye catching, and very well rendered. And he’s FUN. I haven’t been able to stop playing with this guy since I opened him up. This is one weird-ass alien you should definitely consider for your collection. 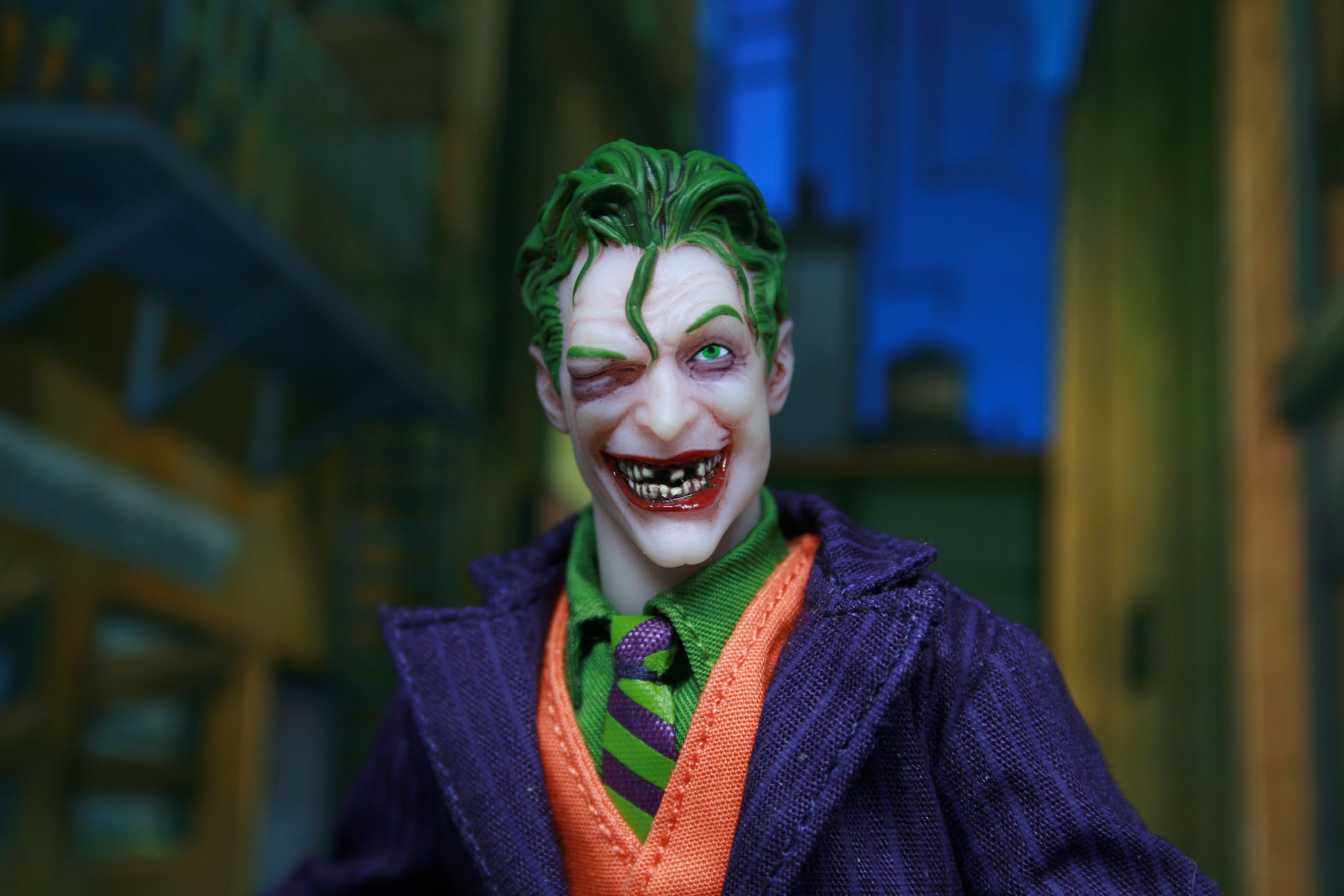 Mezco’s One:12 Collective had some very strong releases in 2018, but the highlight was actually a revisit to an older figure. The Joker had become one of the most sought-after sold out One:12 releases, so Mezco put him back into production… as a Deluxe Edition with lots of great all new accessories. The Deluxe Joker features a perfectly rendered cloth trench coast, new weapons, and new alternate headsculpts which enhance the fantastic original figure perfectly. This was a very smart way to reissue an already sought-after figure while making the new version a genuine value for everyone. I do still wish the cool new accessories had been offered separately for collectors who already owned the first Joker, but that doesn’t mean I can’t appreciate such a well thought out and perfectly executed reissue. 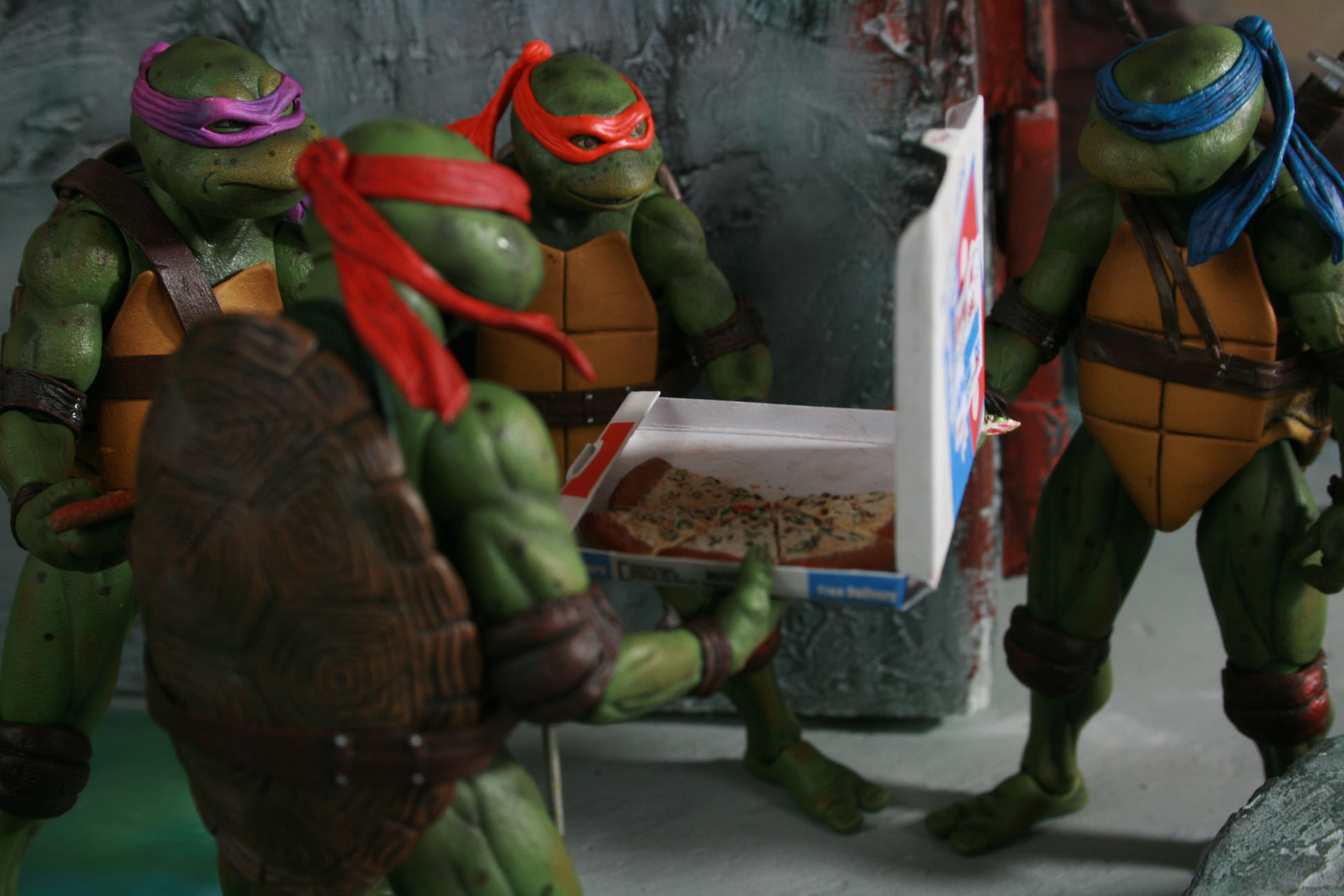 Another (sort of) reissue on the list! NECA killed it with their 18″ Teenage Mutant Ninja Turtles based on the 1990 live action movie, delivering perfectly screen accurate renditions of the four Turtles. But this summer at Comic Con, we were treated to a more space-friendly option, a box set which includes all four brothers plus lots of awesome accessories. The 7″ versions of the movie Turtles not only retain all the detail of their Q-scale counterparts, they actually feature more articulation. The figures are perfect, the accessories are a ton of fun (especially the pizza complete with tiny cardboard Domino’s box), and the packaging was the coolest of the year, a replica of the VHS box art of the movie, but featuring the action figures. It’s the perfect box to house these truly remarkable figures. 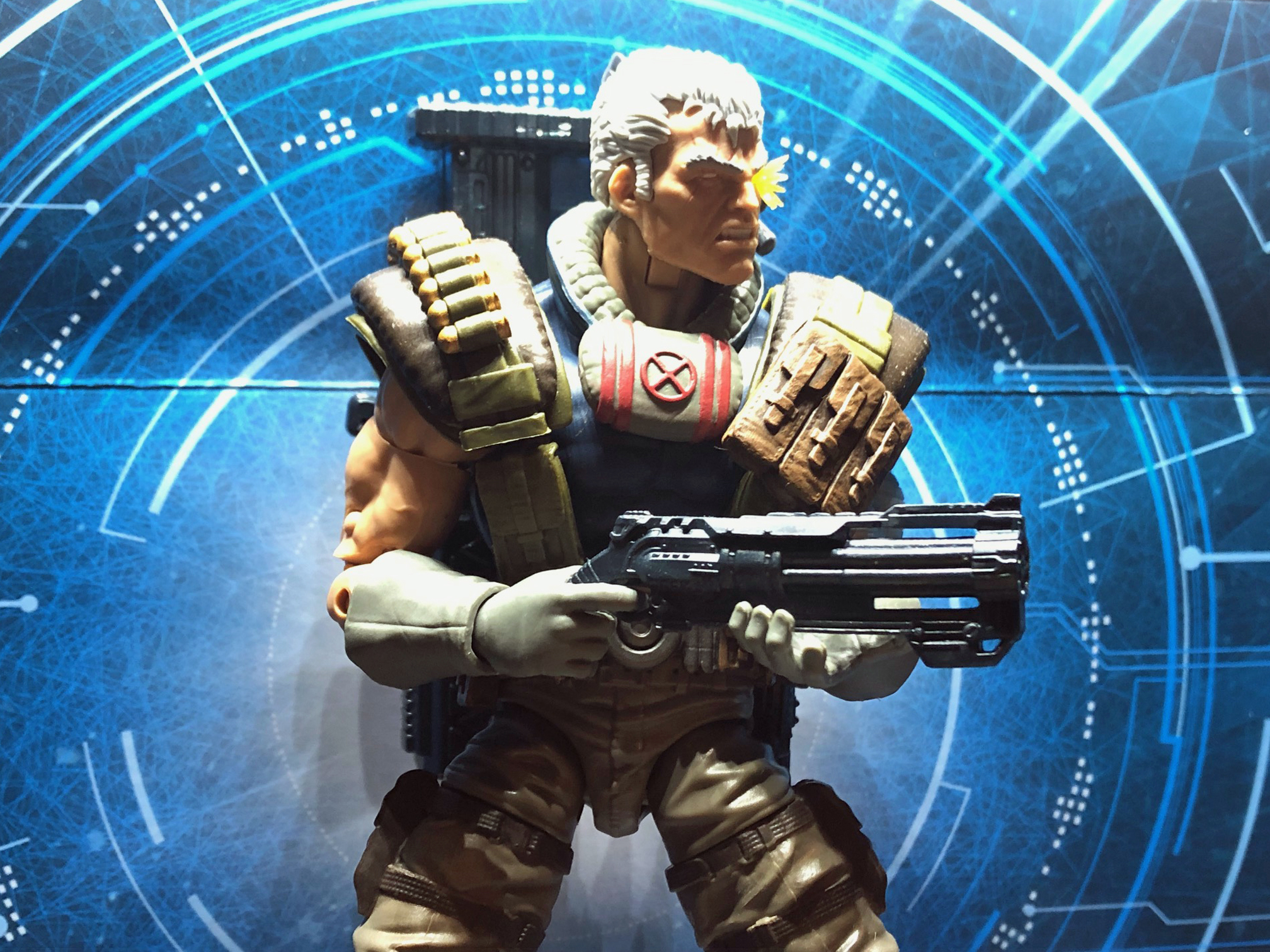 Marvel Legends had another big year in 2018, and one of the things that made me most happy was how many comic style figures moved beyond the basic buck bodies (which I find are getting quite tiresome), to deliver more visually interesting toys. Cable is a great example, utilizing newly sculpted shoulder pads and web gear that enhance the boring base body and make him a very engaging action figure. The perfect Liefeld era headsculpt and the giant honking guns give this figure the exact early 90s vibe he needs to be one of the best comic book figures released this year. 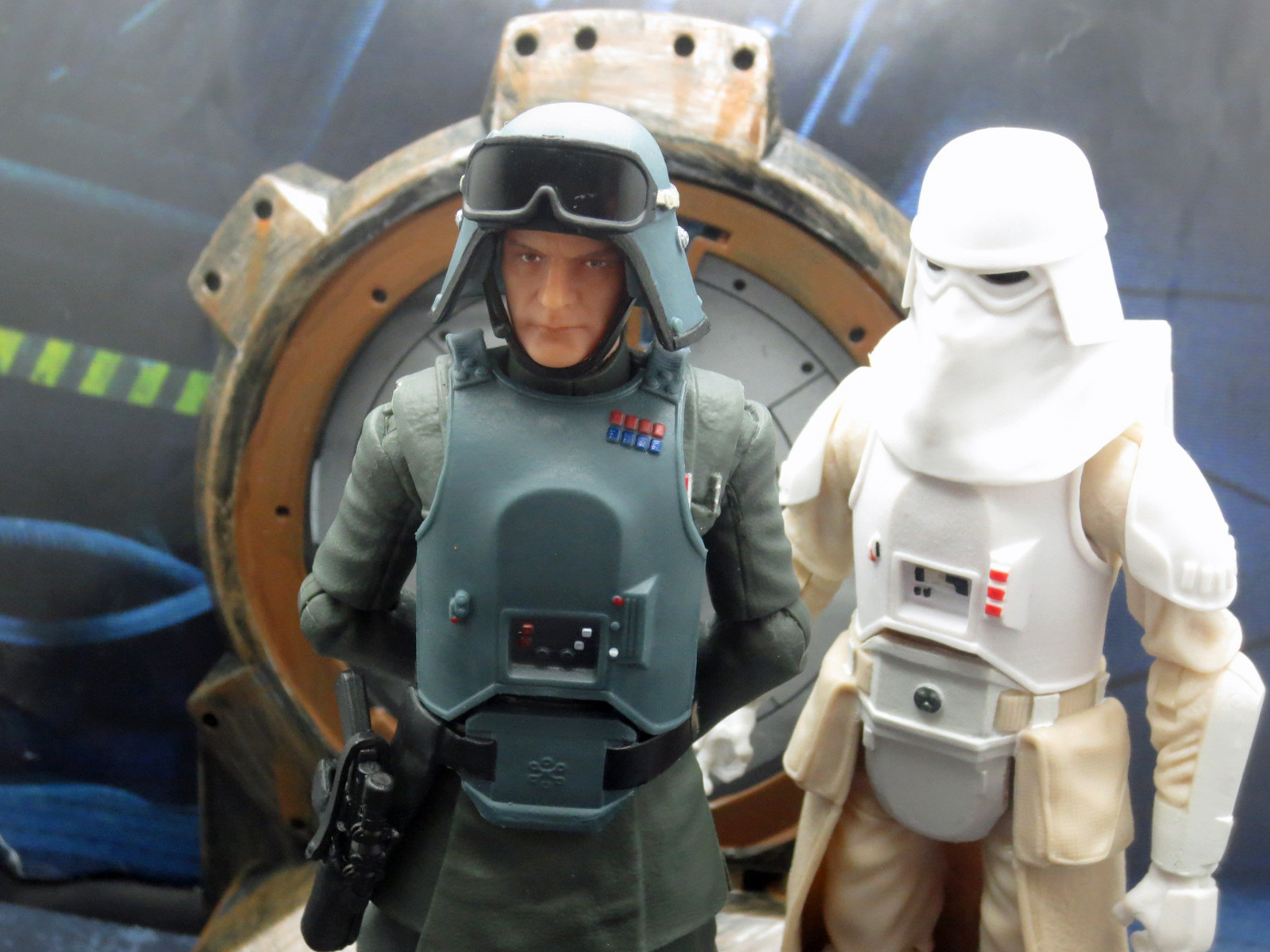 Star Wars: The Black Series was another toy line loaded with highlights this year, but one of the definite stand outs was the Walgreens-exclusive General Veers. We were treated to a few really cool Imperial Officers in 2018, which are nicely sculpted and smartly articulated. But Veers tops the list, with not only an outstanding portrait of Julian Glover, enhanced with real scan paint apps, but also his cool AT-AT Commander armor and helmet. The swappable Imperial cap and helmet and removable body armor allow for multiple looks for Veers, a fun feature that gives him the edge over other outstanding Imperial figures like Tarkin. 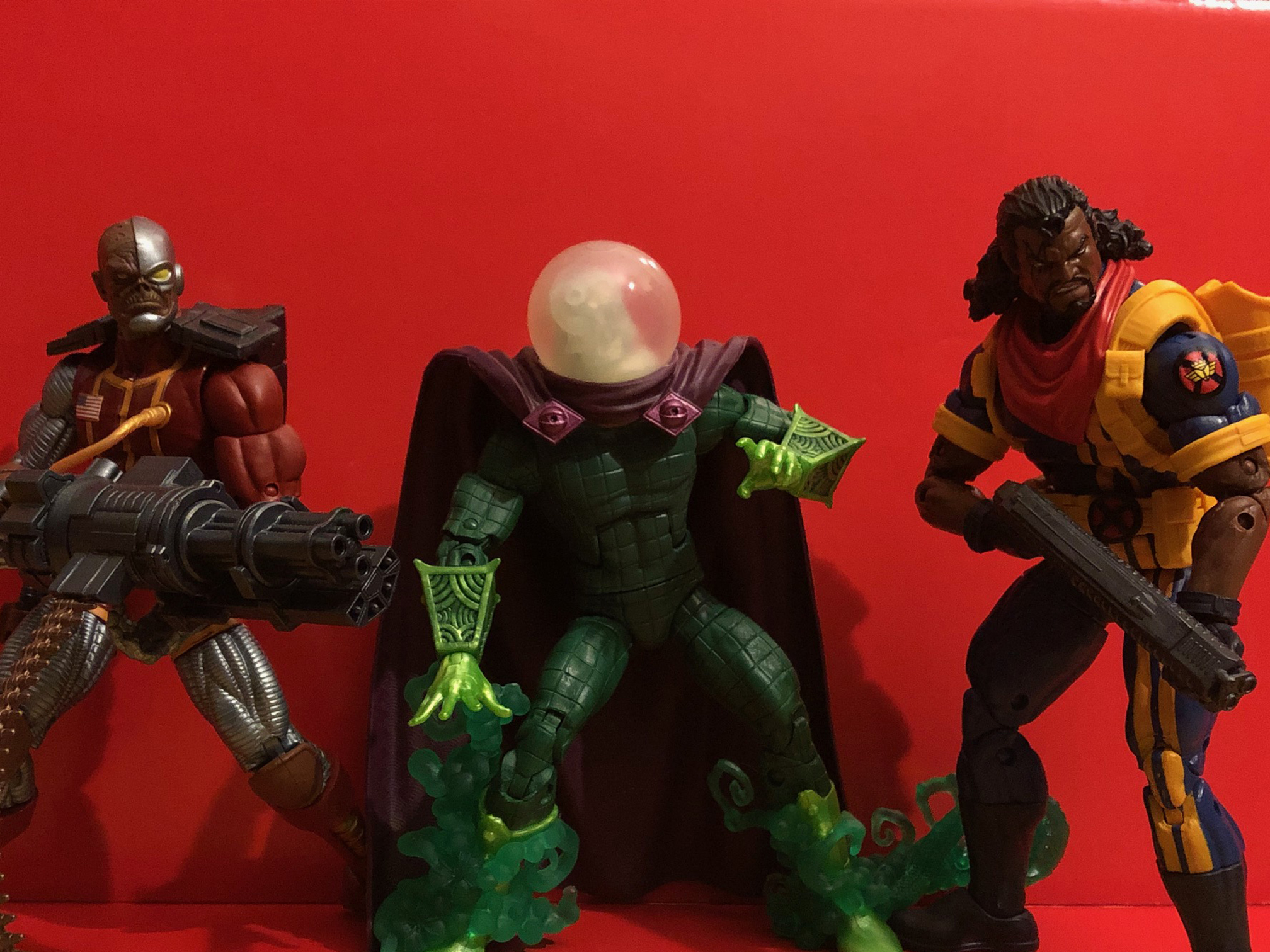 I’m not trying to cheat here, but I feel Hasbro’s Marvel Legends toys based on Bishop, Deathlok, and Mysterio are all equally fantastic, and it’s for the exact same reason. This trio are all perfect toy adaptations of their comic book counterparts. Packed with detail and cool, character appropriate accessories, these are the most fun Legends releases of the year, and I cannot see any way we could ever see more perfect toys based on them in the future. 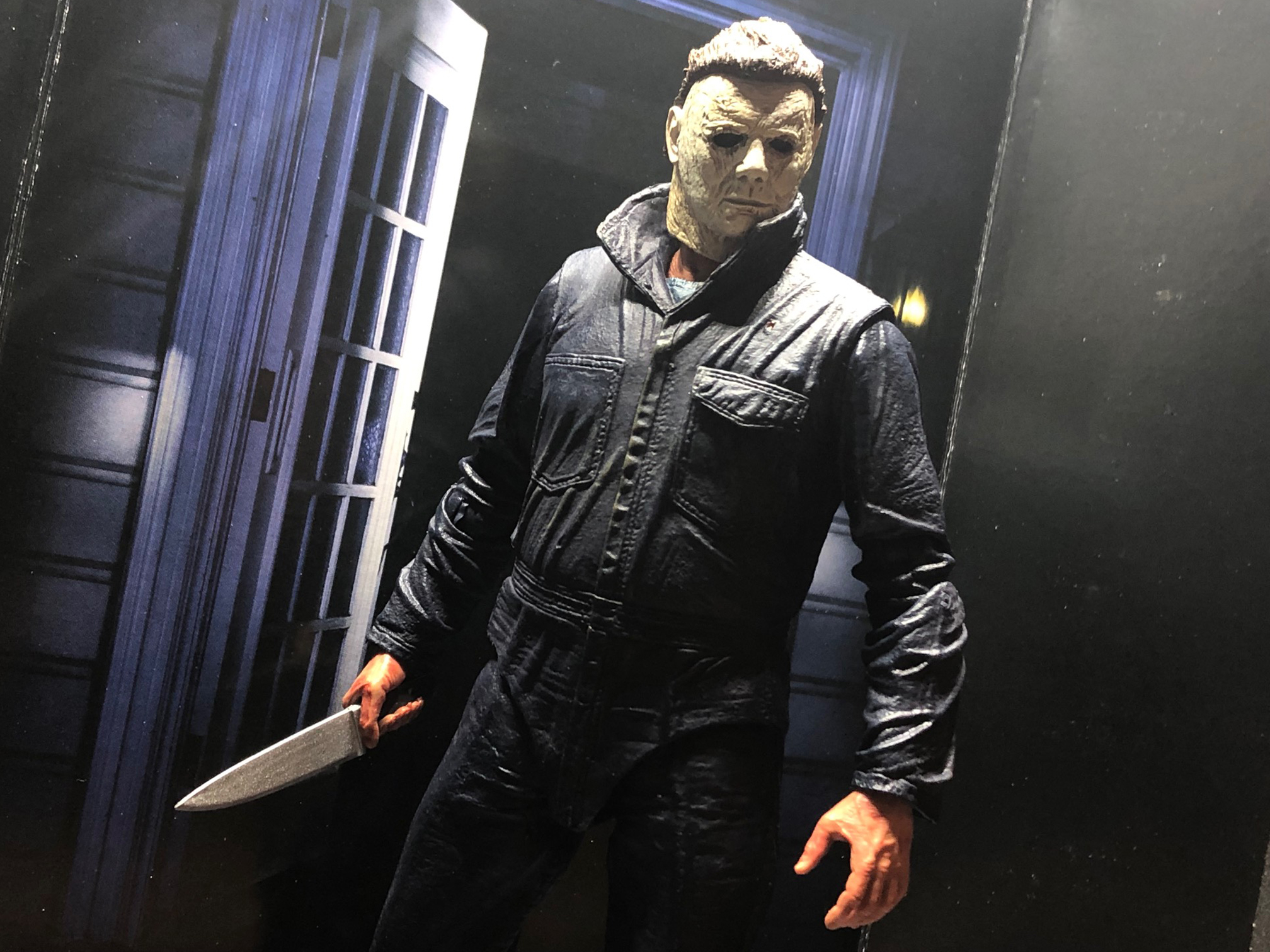 I wasn’t sure if I was going to pick up NECA’s 2018 Michael Myers, but after seeing (and loving) the movie, he quickly became one of my most-wanted toys of the year. I’m very glad he lived up to my expectations, and stands out as one of the overall best action figures released this year. He’s got a perfect range of accessories ranging from every weapon he uses in the film, to alternate hands, and some cool environmental pieces that add flair to a display. The sculpt is remarkable, and loaded with menace and dread, despite Michael’s appropriately blank masked expression. And the articulation makes him very easy to strike a number of great poses, while most of the joints are masked due to NECA’s expert engineering. Even if you’re only into the original Halloween, this Michael Myers figure is so good, he’s worthy of your attention. 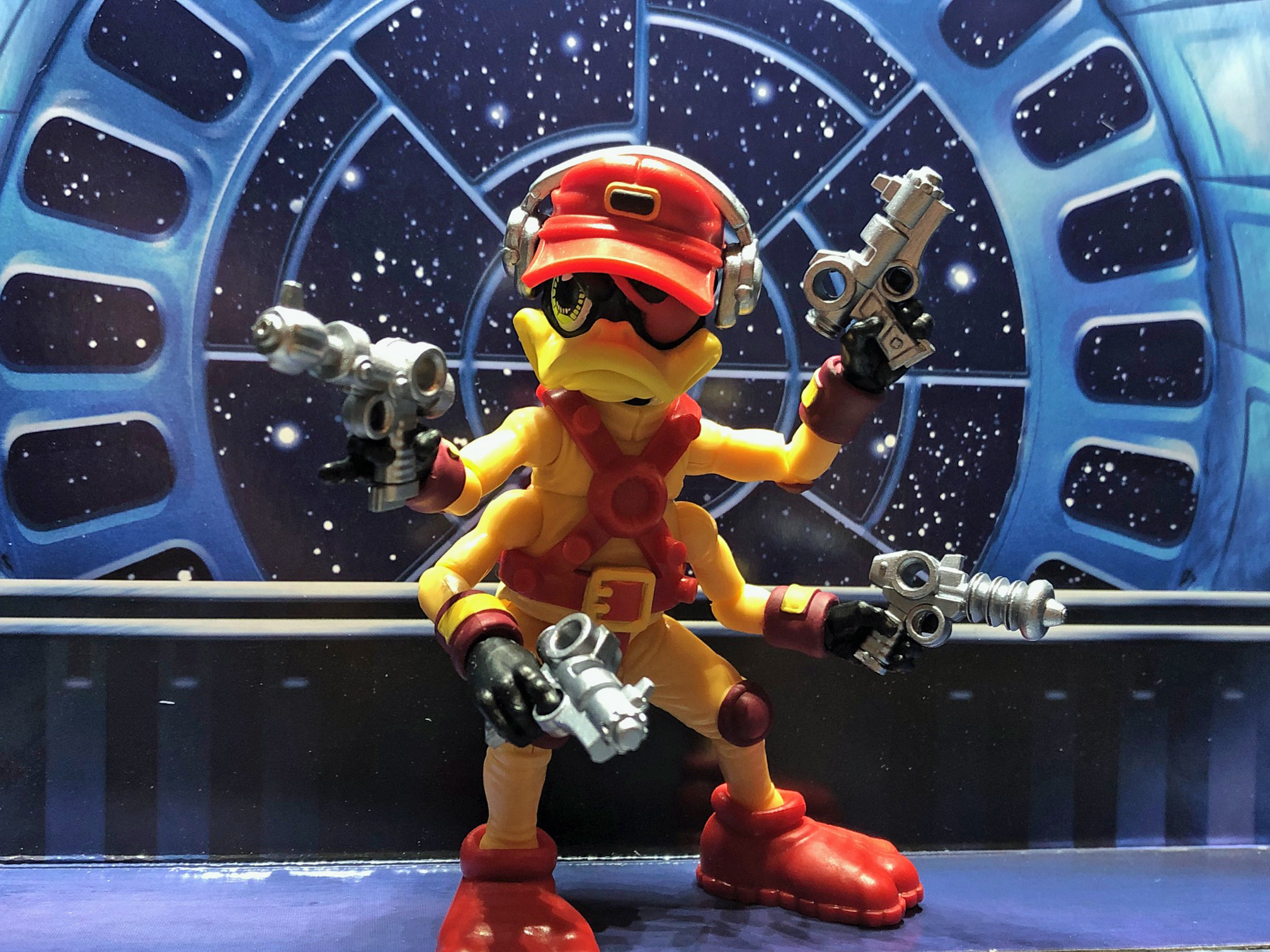 We only got a few new releases in Boss Fight Studio’s Bucky O’Hare toy line this year, but Deadeye Duck, the latest crewmate of the Righteous Indignation, might be their masterpiece to date. Everything about this figure is perfect– his sculpt perfectly matches his look from Continuity Comics, and he features ever more articulation than Bucky and Jenny (thanks to his extra arms), and it all works so well he’s an absolute joy to pose and play around with. The figure’s colors really pop, his weapons work perfectly in hand or stored on his belts, and his alternate parts– including swappable beaks with a variety of mouth expressions– is a clever twist on the alternate face plates featured on earlier figures. 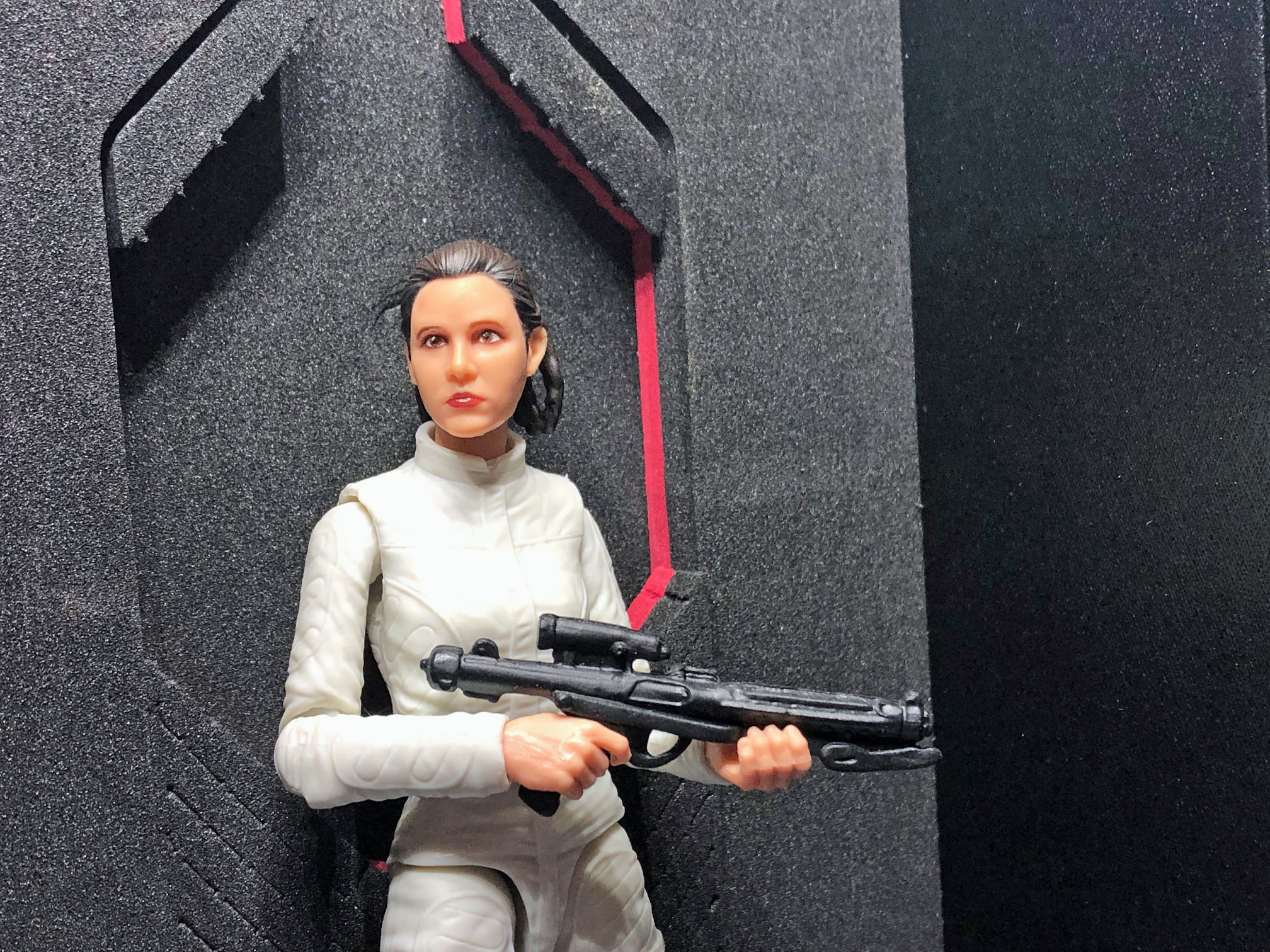 Like I said earlier, there were lots of outstanding Star Wars: The Black Series releases in 2018. But the hands-down best is one of the least assuming. Bespin Escape Leia, a Target exclusive variant released this Fall, portrays the Princess in one of her most simple costumes, just a white jumpsuit. But the sculpt of this figure– the portrait of Carrie Fisher specifically– is so perfect she is instantly elevated to the number two spot on the best figures of the year list. There has never been a better portrait of Fisher than this, and the realistic detailing from the braids of her hair to the natural wrinkles on her jumpsuit make her one of the most subtly textured action figures in The Black Series. She’s incredibly poseable, and the likeness to her on screen appearance late in the run time of The Empire Strikes Back is truly uncanny. If every Black Series figure was as great as this, there would be no better toy line, ever. 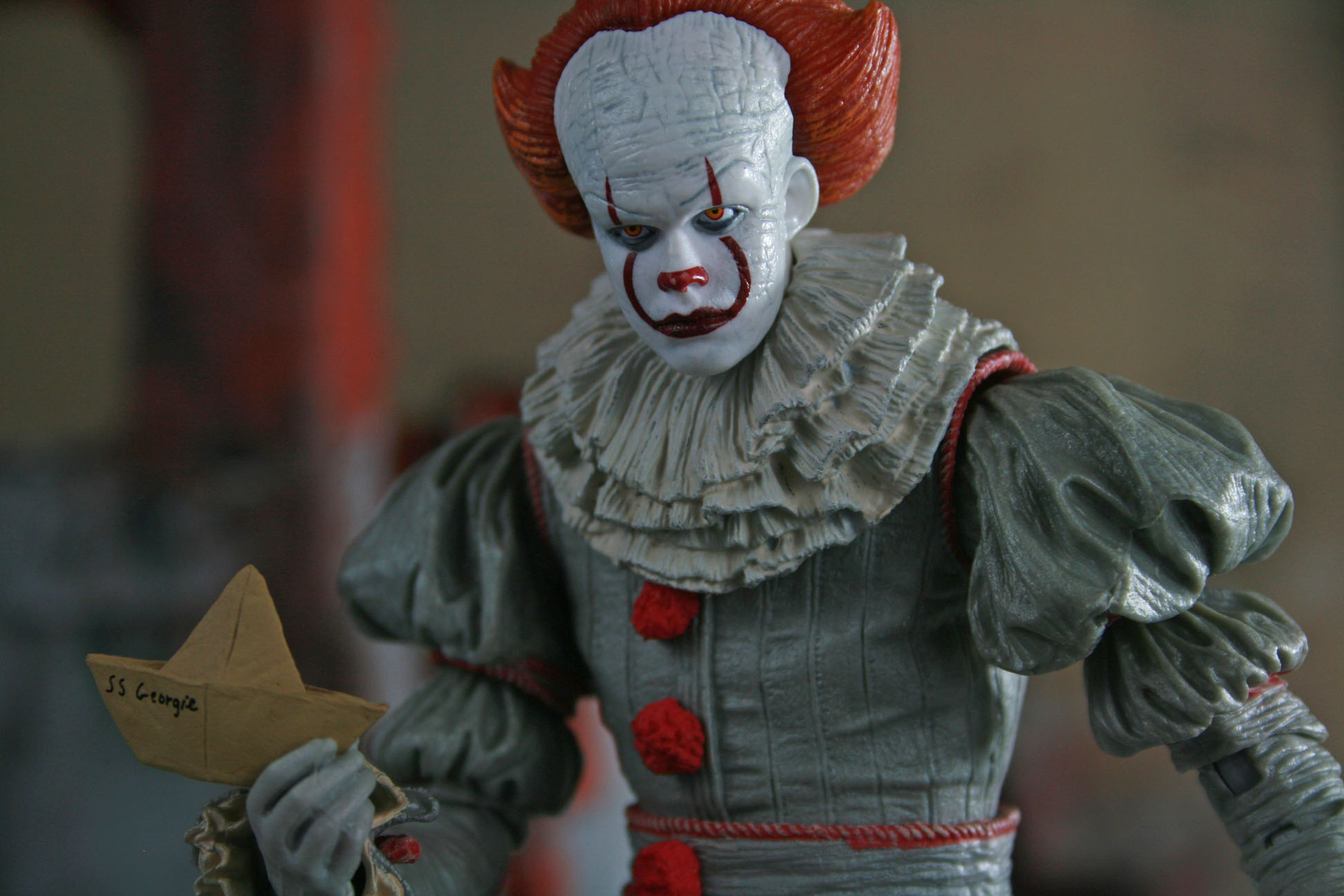 It’s rare to find a perfectly engineered action figure. But NECA did that with their Pennywise action figure based on the 2017 movie. Whether it’s the fantastic, screen authentic sculpt, the chilling portraits of Bill Skarsgård as the dancing clown, the wide range of useful articulation which offers a lot of posing options, the expert masking of every point of articulation, and the cool accessories that enhance the figure’s playability and display options even more… there’s nothing about this figure that is less than incredible. Pennywise is loaded with personality, creepy as hell, and simply to much fun to pose around and haunt a poor, unsuspecting toy shelf. If you could only purchase one action figure in 2018, there is no question, Pennywise is the one to get.

So that’s my list for 2018! There were a lot of other great action figures released this year as well, of course, including the Black Series Bounty Hunters, SH Figuarts amazing old man Luke Skywalker (how Hasbro hasn’t made a 6″ version of this look for Luke yet is beyond me), the perfect army builder that is the Marvel Cinematic Universe Red Skull/ Hydra Trooper, and lots more. I’d also like to highlight the best value of 2018– The Black Series Enfys Nest with Swoop Bike (this thing is HUGE! And it only cost, at most, $60!), and the year’s most fun release– Jazware’s Fortnite Drama Llama Loot Pinata (which was the most fun I’ve ever had unboxing a toy).