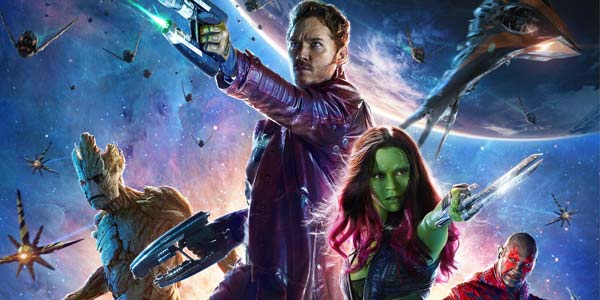 Obviously Guardians of the Galaxy is on the list. But where on the list?  And along with what else?

What a great year for movies!  This list of my picks for the ten best movies of 2014 was tough to assemble, and I’m still not entirely convinced of the order, nor of exactly what should be included.  I could spend a whole day (well, another whole day, I guess) just trying to consider whether I was happier to have my very high expectations met by a movie like Guardians of the Galaxy… or to be totally blindsided by surprises like John Wick or Edge of Tomorrow.

And yes, there’s movies I didn’t see yet which would almost undoubtedly be added to this list (sorry I live in boring old, January-release-dated Connecticut, Inherent Vice)… But sadly, I have things to do, so as with every list, there comes a point when you’ve gotta just grip it and rip it… so here we go with my picks for the ten best movies of 2014: 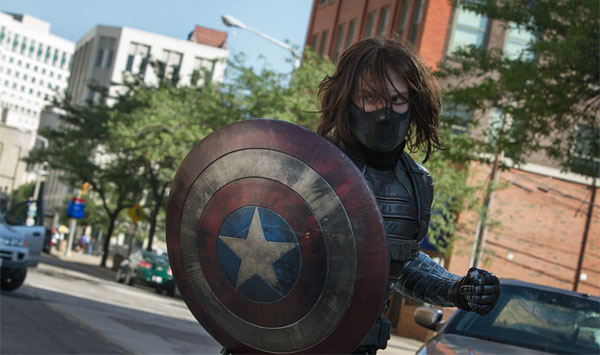 The best super hero movie of the year, and possibly the best super hero movie ever from Marvel Studios, The Winter Soldier has all the makings of an instant classic.  The action is incredible, the stakes are huge– in both the global scale of the dangers Steve Rogers and his friends face, as well as personally, as Steve must confront his former best friend, Bucky, now an operative of Hydra.

Despite the darker tone to the story being told, the movie still balances Marvel’s trademark sense of fun and adventure, and features plenty of great interplay between the characters, especially Chris Evans’ Cap and Scarlett Johansson’s Black Widow.  These two have never been better, proving now more than ever that they are perfectly cast to bring these heroes to life.

The Winter Soldier is addictively rewatchable, with a great sense of pacing, and action and story beats that stay entertaining no matter how many times I see them.  I have probably watched this more than any other movie from 2014, but I honestly just can’t get enough of it, especially now knowing what incredible things Marvel has on the horizon in the aftermath of this film and Age of Ultron. 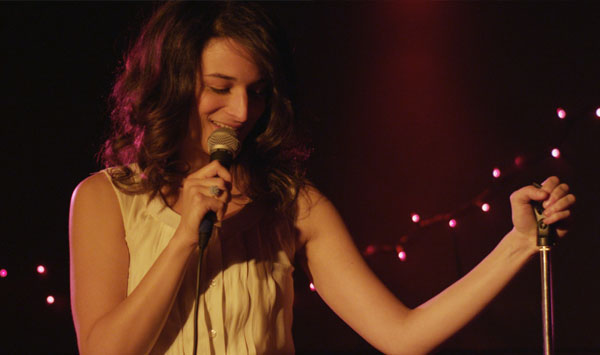 Obvious Child is as slyly smart and endearing as its protagonist, a small-time stand up comedian named Donna (the incredible Jenny Slate).  Donna’s unwanted pregnancy after a one-night stand fuels most of the movie’s plot, as well as providing the main “hook”– this being the first romantic comedy about abortion– but there’s so much more going on than that.

This is, from start to finish, Donna’s movie, and she’s one of the most believable and fully realized female characters I have seen all year.  She’s smart but immature, self depricating but selfish, deeply hurt but never at risk of losing her strength or agency.  The dichotomy between Donna’s genuinely charming romance with would-be baby daddy Max, and the believable and practical way in which the issue of abortion is addressed are balanced brilliantly by writer/ director Gillian Robespierre.  The end result is movie that is smart, funny, charming, and– most importantly– honest… it’s the best comedy of the year, hands down. 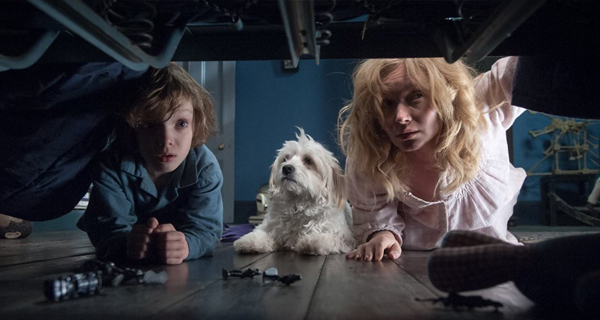 What is it that makes scary movies scary?  I think there are two ingredients needed to make the formula work– a strong sense of atmosphere and characters worth caring about.  The Babadook includes both these requirements, and uses them brilliantly, telling the story of a single mother at the end of her rope, her believably abnormal son, and the horrible ghost that invades their home.

There’s surprisingly little gore, or creature effects or jump scares in The Babadook, which is actually a great call on the part of director Jennifer Kent, who keeps the focus almost exclusively on this fractured and desperate family unit.  Noah Wiseman’s Samuel is one of the best kid characters ever captured on screen, finding just the right balance between charming, annoying, strange and genuinely exasperating, and Essie Davis is stunning as his mom, Amelia.  Her battle with the demon doesn’t play out in the way most movies of this sort would, and the combination of that unpredictability and my genuine concern and compassion for these people left me on the edge of my seat until the final credits rolled. 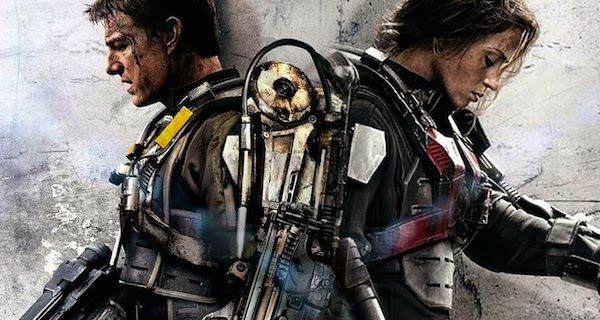 When the first trailer for Edge of Tomorrow came out, I literally laughed out loud as me and a friend made fun of it.  From the recycled exo-suits from Elysium to the tired-sounding premise, I had a field day talking shit about this movie up until I finally gave it a watch, and immediately (and with gusto!) ate crow.

Yes, Edge of Tomorrow uses a fairly standard sci-fi trope for its premise– this guy is caught in a time loop, and has to learn something about himself in order to escape!– but it tells the story in an incredibly tight, focused way that is filled with great action, even better characters and a masterful sense of pacing.  Much has been said of Tom Cruise in this movie, playing a character that reminds us all why we love him as a lead actor… but while this is certainly true, it was Emily Blunt and Bill Paxton who, in my opinion, are this movie’s true superstars. 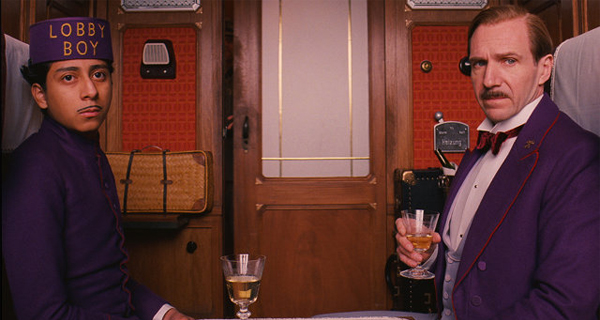 I adored Wes Anderson’s Grand Budapest Hotel, a movie that’s an obvious extension of his previous films, in that it both refines their quirky, intricate nature while attempting to justify it at the same time.  It does just that, thanks to its story, within a story, within a story structure, and yet while everything here should feel familiar for Anderson fans, it’s not entirely.

There is a scope and sense of scale to the adventures of Gustave (Ralph Fiennes, playing just about the most entertaining cinematic character of the year) and Zero the Lobby Boy that makes Grand Budapest feel bigger and more mythical than anything else Anderson has done.  As the story weaves between harsh reality and pure fairy tale magic, I found the perfect sweet spot from which to appreciate not only this film, but one of the most talented filmmakers of this generation. 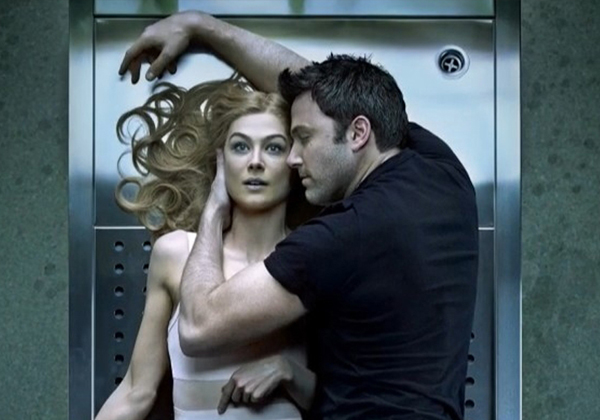 David Fincher, Gillian Flynn and Ben Affleck all deserve plenty of credit for refining Flynn’s crime thriller novel into an even darker, more vicious and haunting film, but it’s Rosamund Pike’s Amazing Amy that left me feeling Gone Girl will be an all-time classic, the movie that finally feels totally worthy standing shoulder-to-shoulder with Fight Club in Fincher’s catalog.

Pike’s Amy might be THE best movie villain of 2014. Her journey from object of our affection, to victim, to woman of agency, to femme fatale is expertly crafted, as the film’s surprises are slowly peeled away, and Pike remains utterly captivating whether I loved her, hated her, or both. 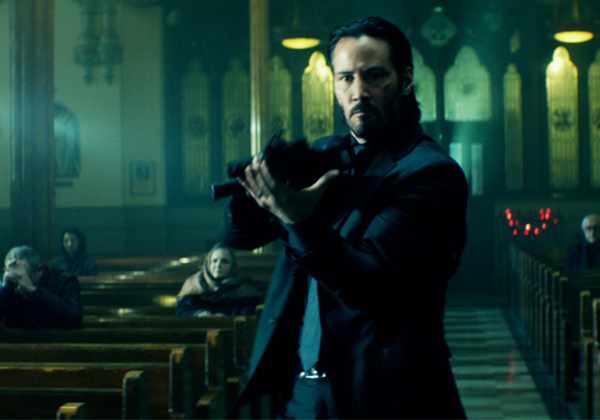 How a Keanu Reeves flick about a hitman who goes on a rampage to avenge his dog, became the year’s best action film is beyond me, but there it is.  John Wick is not only amazing for its astonishing, next-level action sequences (courtesy of stunt expert/ first-time director Chad Stahelski), but for being one of the most straight-up entertaining movies of the year.

This movie, more than almost anything else I saw this year, inspired me to rewatch it, before the credits even finished rolling.  Even now, after letting John Wick and his fantastically realized world of gangsters and hitmen and coins and moral codes kick my ass in theaters a few times, I’m dying for the home release, a Blu Ray I guarantee will be getting a healthy amount of play at my house. 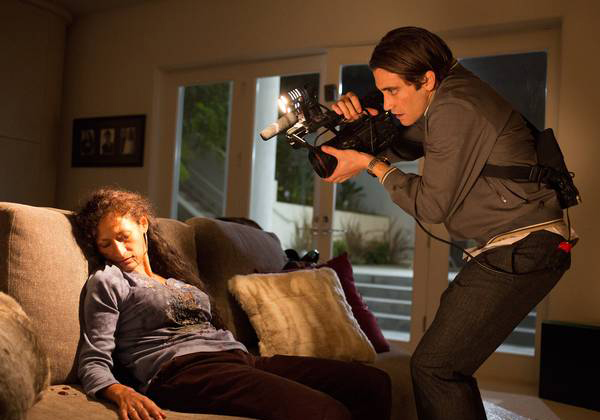 Sleazy and sharp are the perfect words to describe Nightcrawler, as well as its protagonist, the sociopathic freelance crime journalist Lou Bloom (Jake Gyllenhaal, TOTALLY worthy of all the praise he’s been getting). Dan Gilroy’s movie serves as both a character study looking at the dark side of ambition, as well as a brutal– and usually brutally funny– indictment of the modern state of journalism.

Between Nightcrawler and Gone Girl, we’ve got two great crime stories this year which aren’t afraid to go for the throat when it comes to the media, and their sensationalist attitude towards crime, violence and death. I think these two back-to-back will make for an awesome double feature… not only for their thematic similarities, but as two of 2014’s absolute best films.

2. Guardians of the Galaxy 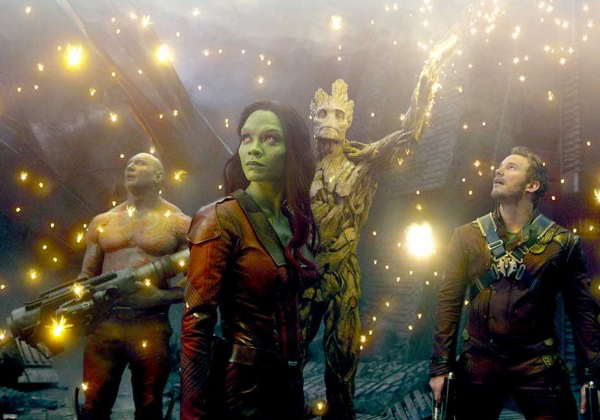 I mean, we all saw this one, right?  Is there anything to say that hasn’t already been said?  About how this was Marvel’s biggest gamble– a space opera featuring a bunch of unknown characters, directed by a beloved but VERY cult director?  Not to sound arrogant in hindsight, but I had faith in this one for a long time, and that the final movie was even MORE fun and cool and entertaining than I had hoped for, was a sign to just how fantastic James Gunn and his cast and all of Marvel Studios really is.

I’m aware that the Ghostbusters and Back to the Future comparisons are old hat now, but seriously– I truly believe Guardians of the Galaxy will follow in those movies’ footsteps as a benchmark, a blockbuster that others will strive to be like, and one that will inspire the next generation of soon-to-be movie geeks. 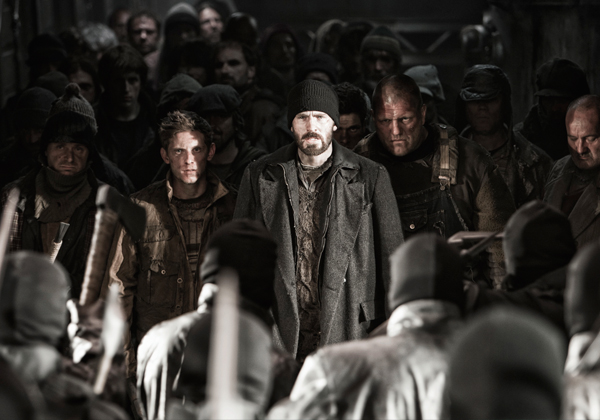 There is no movie that I connected with– or have defended– more than Snowpiercer.  Joon-ho Bong’s sci-fi tale of the put-upon lower class aboard a massive train that houses what is left of humanity in a frozen world, and their efforts to revolt against those who lord over them, would be interesting and timely regardless.  But great performances by the likes of Tilda Swinton and especially Chris Evans combine with brilliant choreography and a wonderful surreal streak (it’s no coincidence we get a character named Gilliam here) to make Snowpiercer one of the most energetic and completely engrossing movies I’ve ever seen.

As much as I adore the final act plot twists– which are both legitimately shocking and feel completely earned– it’s the truly revolutionary actions that end the story which makes this movie feel like such a lightning rod.  Sometimes it’s not enough to beat the bad guys… true change needs to be more than that, it needs to be bigger and more of a risk.  And with luck, that risk will pay off.  I’ve had many debates about what the final scene of this movie says, and I look forward to doing this over and over again for years to come.