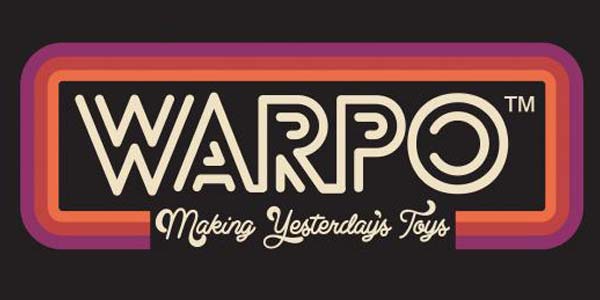 Two of the minds behind WARPO, creators of the awesome Legends of Cthulhu toy line, share their insight into vintage action figures, HP Lovecraft and lots more.

One of the most eagerly-anticipated new toy lines of the year is Legends of Cthulhu, the debut series from WARPO.  These figures redefine what retro toys can (and should) be, with a perfect sense of fun combined with true fealty to the late 70s/ early 80s era of action figures which inspired them.  I’ll be running a special First Look at the Legends of Cthulhu figures later this week, but in the meantime, I got to bounce a few questions around with Bryan Katzel, WARPO’s President/ Owner and Eric Lefeber, VP of Marketing/ Owner.

When it comes to awesome vintage action figure lines, the WARPO guys definitely know their stuff, and they translated that knowledge and love brilliantly into their first toy line, and their company.  We will be hearing more from WARPO very soon, of that I am confident.  Check out what they had to say about Legends of Cthulhu, their idea of what retro toys should be, and how they took their early toy concepts and made them a reality.

1.  Kastor’s Korner: Which came first for Legends of Cthulhu– the property, or the retro toy aesthetic?  Was going retro with this toy line always part of the plan, from the very beginning?

WARPO: Most definitely the retro toy aesthetic came first. We created WARPO after being dissatisfied with the qualitiy level and attention to detail of current “retro” toys on the market. Being collectors and toy designers we were confident that we could provide an experience that went beyond what was out there. It was not until after that was established that we begun conceptualizing product lines and hit on the idea of doing a line of toys based on the work of HP Lovecraft.

2.  Kastor’s Korner: One of the things I love about Legends of Cthulhu is the mythology it invents, tying in many elements from H.P. Lovecraft’s various stories into a single adventure-style narrative.  Will future releases continue this story, with more Elder Gods and other Lovecraftian creatures for the Professor to fight?

WARPO: If / when we proceed with another LoC series release we will most definitely follow suite with this direction. We approached creating this line by challenging ourselves with all the same questions and obstacles that toy companies of the 70’s & 80’s would have needed to resolve: how will we attract our young consumers, how can we translate HP Lovecraft’s works to be easily digested, who’s the hero, what’s the conflict, collectibility, and so on. Going through this process is what helps to make this new “retro” collectible seem legitimate and rich with history. Something that’s never existed but you still have a deep nostalgia for.

3.  Kastor’s Korner: While there’s certain elements that are agreed upon as fairly universal, there are no canonical character designs for Lovecraft’s monsters, like Cthulhu.  How did you approach the designs of the characters for your toy line?

WARPO: Again, we had to approach the design process as a creative team from that era would have. That’s not to say that we didn’t take into consideration how Cthulhu and this cast of characters have been portrayed in the past (we knew this fan base would have certain expectations), but we also wanted to make sure that these toys fit in the era they were supposed to represent – so we reviewed all the major monsters and 3.75″ toys of that era.

4.  Kastor’s Korner: I see a lot of great influences in every aspect of the Legends of Cthulhu figures, from LJN’s Dungeons and Dragons to Knickerbocker’s Lord of the Rings.  What were some of the vintage toy lines that most influenced you in developing Legends of Cthulhu?

WARPO: You hit it right on the head – all the classics of that era: Clash of the Titans, Flash Gordon (these figures came up again and again…), Dragonriders of the Styx, Battlestar Galactic, LJN’s Advanced Dungeons and Dragons line, Star Wars,  and many, many more. 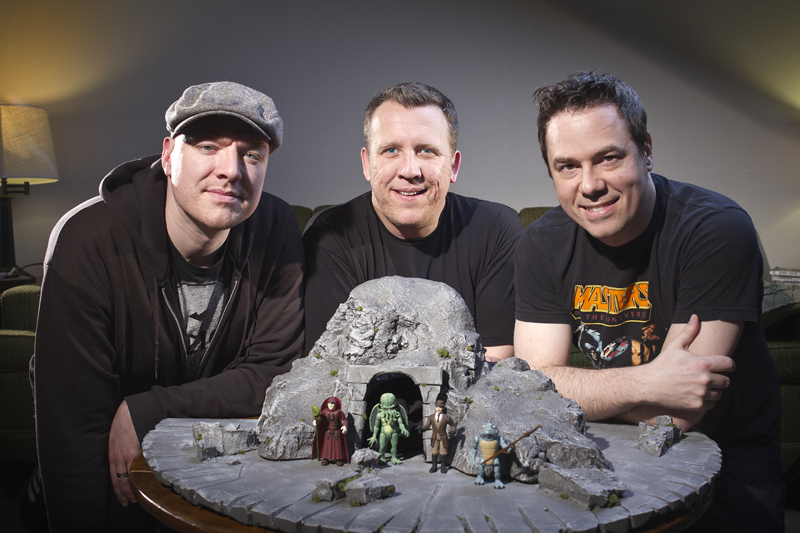 5.  Kastor’s Korner: H.P. Lovecraft is an impressive first property for a new toy company.  What are some other properties that, in a perfect world, you’d love to make toys for?

WARPO: That is a great question. Honestly, when we sat down to create WARPO it was with the intention to only create toys that have never existed before. We were tired of seeing the same properties being rehashed over and over, losing their edge and appeal, never living up to their retro counterparts. We believe our team has the capability of creating brand new properties, that have never existed before but sit right next to your toys of that era. We essentially acheived this with our first line of toys and will be pushing the envelope even further in the future.

So, I guess to answer your question, in a perfect world we’d like to be working with WARPO’s properties in the future.

6.  Kastor’s Korner: For a long-time toy geek like me, one of the biggest appeals of Legends of Cthulhu was the toy industry rock stars you enlisted, like sculptor Eddy Mosqueda  and cart art painter Ken Kelly.  How did you first approach them for this project?  How much input did they have in the planning and design of the figures in this series?

WARPO: We were connected with Eddy through other industry contacts. Knowing the work Eddy had done in the past with TMNT and MOTU we knew he was going to be a good fit, but it wasn’t until after speaking with him on the phone that we knew he’d be a great asset to the team. Eddy was dedicated from the very start after hearing our concept and approach to designing toys. He worked incredibly hard not only on sculpting the entire line but also drawing / designing the figures. Our team worked side by side with him on the creative direction – passing sketches back and forth, and I believe Eddy’s year’s of experience really show in the final product.

Ken Kelly was amazing to work with. Most of the packaging artwork we had in the style / example guides for LoC was created by Ken – Micronauts, LJN’s AD&D Tiamat package, Manglors, etc. After hearing about our approach to creating the package and product line, Ken was totally on board and we were floored. And it wasn’t until we really dove into the creative process that we truly understood how incredible Ken was. He was a class act to collaborate with, a humble artist with a wealth of knowledge that he was more than willing to share with our team. Needless to say, we were more than pleased with the magic both he and Eddy cast onto the Legends of Cthulhu line.

7.  Kastor’s Korner: The Legends of Cthulhu Kickstarter campaign proved to be a big success, not only green lighting this first series of figures, but unlocking two stretch goals.  Since then, Legends of Cthulhu has been picked up by Diamond for retail distribution.  Considering this, how do you think we will see future figures released?  Will you go back to Kickstarter, or has Legends of Cthulhu grown bigger than that already?

WARPO: Some products, and in our case toy lines, wouldn’t be possible without crowd funding sites like Kickstarter because there are certain things that only fans understand. We know from our many years of experience in the toy business that if we had pitched an authentically vintage toy line based on the works of a writer who’s been dead for over seventy years with no movie or tv show behind it to a mass-market toy company, we would have been run out of their offices faster than albino penguins being chased by a Shoggoth.

That said, the Kickstarter has proved to retailers that fans are interested in these types of toys, so they’re will be more willing to carry them. The short of it is, we will forge retail partnerships wherever we see the greatest opportunities for releasing more toys but we will evaluate each product line on a case-by-case basis. If a new line warrants a Kickstarter, we certainly won’t rule it out.

8.  Kastor’s Korner: You have said that the concept behind Warpo Toys is to carve out a theoretical place in action figure history, with an authentic retro look and feel to that era.  You nailed it with 3.75″ Kenner-style figures… but that era also featured a number of different scales and articulation patterns.  Dungeons and Dragons and Power Lords, for example, were bigger and more articulated.  Have you considered approaching a different scale or articulation model for future Warpo toys, or will you stick to the 3.75″ scale?

WARPO: LoC was a 3.75″ action figure line because it needed to be. Through our Method Manufacturing process, we couldn’t see it being produced any other way for a number of reasons; from comparable figures of our target years (’79-’81) to the plans we had for a giant size Cthulhu. For our future lines, these are the kinds of things that will drive the style of toys we make. So while we have a very large warm place in our hearts for 3.75″ action figures with five points of articulation, it won’t be the only style of figure or toy that we produce.

9.  Kastor’s Korner: We know the Kickstarter ended before we unlocked the stretch goals for The Author and the giant-size Cthulhu.  Do you still plan to release these figures in another way?

WARPO: We were sad that we did not reach these goals as we personally really wanted them in our collections. However at this point, we have nothing to announce regarding either of them.

WARPO: I’d love to share all of our top secret plans for 2015 but it’s still a little too early. However, I can tell you that if you want to see more LoC, be sure to make your voice heard at your local comic, toy, and game stores, favorite online retailers, and on our Facebook page (https://www.facebook.com/warpotoys). It’s also a good place to get the latest info on our upcoming awesome new toy lines!

Check back later this week for our First Look at the Legends of Cthulhu! 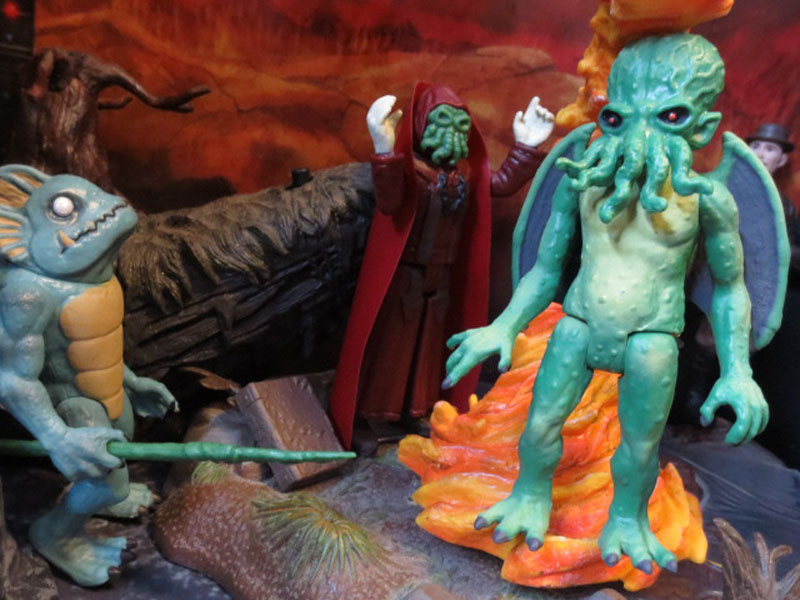