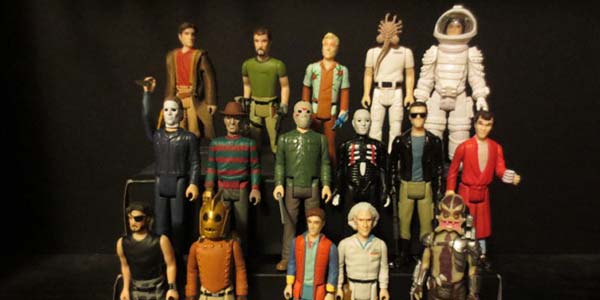 From nostalgic to cutting edge, classic to revamped, Bill counts down the top ten toy lines on the year.

2014 was a very interesting year for toys, one which saw some long running series revamp in exciting ways, while some of the walls that divided the toy world began to disintegrate in some unexpected ways.

The divide between collectors’ brands and kids’ brands seems to have grown even wider (one look at the underwhelming toy aisles at Wal-Mart and Target will help prove that point), and yet some exciting new toys have found new ways to bridge that gap.

And of course, there was a lot released this year which tugged at those nostalgic heartstrings inside all of us, but amidst that retro appeal we found some very cool stylistic choices, and an intriguing trend that tied art toy aesthetic closer to mass market releases than ever before.

So things most definitely got shaken up for toy lovers over the past twelve months, and the list below represents some of the biggest shakers of the bunch.  This list also features the toy lines whose cleverness and sense of fun transcended the barriers between boys and girls, adults and kids, and helped make toy collecting such a cool hobby in 2014.

Here’s my picks for the year’s best toy lines:

The Four Horsemen’s second licensed property finally launched, with an impressive debut lineup with saw classic characters Adam Power, Lord Power and Ggripptogg updated in the modern glyos style, along with a few new Ggrapptikk solider figures who fit right in to the strange and fantastical aesthetic of this series.  The Horsemen’s new sculpts are outstanding, capturing the bizarre look of Wayne Barlowe’s vintage toy designs while simultaneously making these figures their own, and this first lineup left me eagerly awaiting the second series, planned for 2015.

There is no denying that Playmates’ Nickelodeon inspired TMNT toy line is a powerhouse.  There is no other toy line that can movie at the massive volume and speed with which the Ninja Turtles’ shelves empty and refill all year round.  You’d think that by year three, some link of the chain would start to weaken, but here we are, with kids and collectors still loving the figures, the retailers’ sections only getting bigger, and Playmates’ variety continuing to diversify.  2014 saw updates of fan favorite characters like Casey Jones, Slash, Rocksteady and Bebop, as well as all new characters like Tiger Claw.  And Playmates even threw in a few awesome surprises along the way, such as their Mirage comics inspired Ninja Turtles.  There’s no telling how far this line will go in the future, but I am certainly enjoying the ride right now. 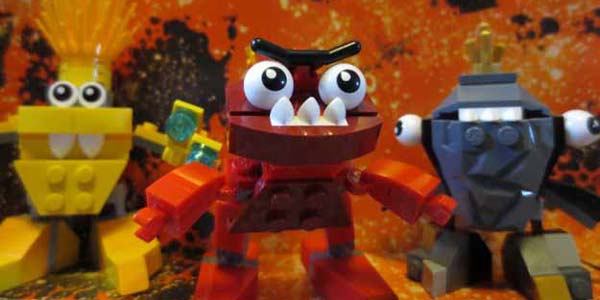 The most fun concept to come out of Lego this year were the Mixels, a line of 2 to 3″ buildable creatures.  These color-coded monsters assemble to form fully articulated figures which are packed with personality.  They are incredibly cute and charming, easy to build, and feature very clever reuse of some existing Lego parts (one guy features eye lids made out of helmets) that I think is completely awesome.  The line was released along with a web cartoon, making Mixels a hit with kids of all ages, and at $5 a figure, this line is affordable and fun, and totally addictive.

McFarlane Toys’ Walking Dead toy line expanded in a big way in 2014, with two waves of TV figures rounding out our core cast of survivors, and a new comic wave (and multiple exclusives) fleshing out the printed corner of the toy collection.  But that’s not all– we also saw the release of the all-new Walking Dead building sets, a first for McFarlane, which left me quite impressed as well.  With their realistic aesthetic and small scale, the Walking Dead building sets felt more like mini model kits than Legos, and that combines the best of both worlds, offering fun kits to put together which look amazing on display once fully assembled. 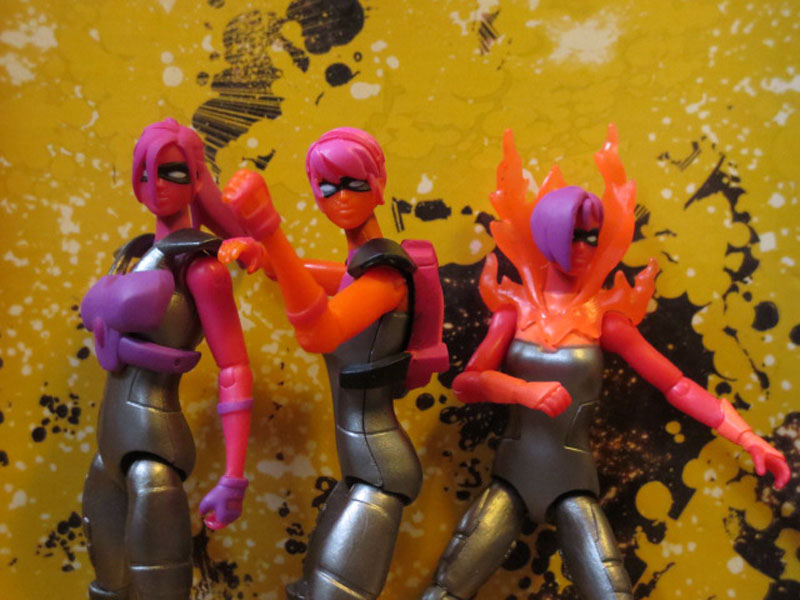 One of the most exciting developments in the world of action figures this year was the wave of inventive and intriguing action figure concepts on Kickstarter, and one of the most promising was IAmElemental.  This female-centric (and female-positive) toy line features a team of seven original super heroes with practical and incredibly well-designed costumes, and realistic body proportions.  The goal of these figures was to send a positive message about gender to girls and boys alike, but in the process, what IAmElemental also accomplished was creating some of the best designed, most fun action figures of the year. 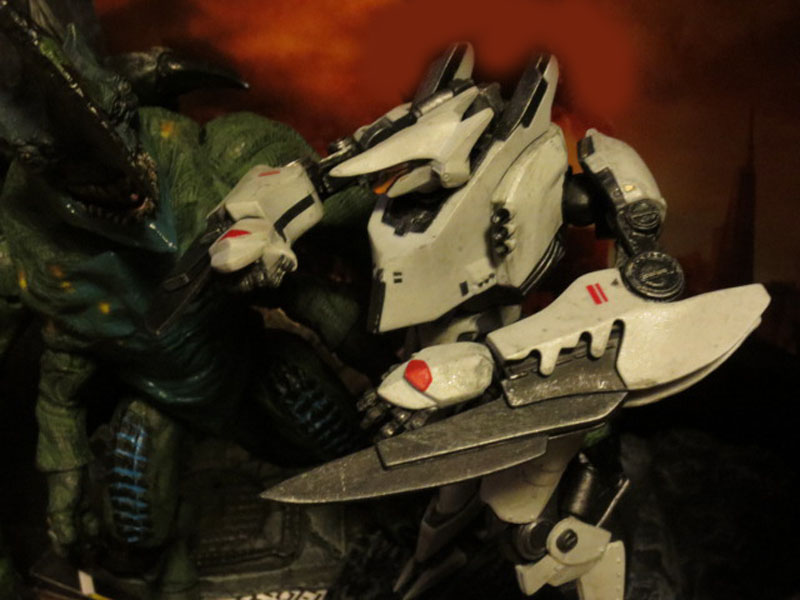 Most toy lines based on modern movies are living on borrowed time.  The toys for summer blockbusters usually make their way to the shelves in the spring, and are clearanced out right after Christmas.  But sometimes, the stars align and a property bucks that trend, as we’ve seen with NECA’s Pacific Rim series.  But that’s not what earns this series a spot on this list– 2014 saw NECA truly capitalize on the positive response to their first few Pacific Rim toys, by going back to the drawing board to design bigger, better and more badass toys based on the Jaegers and Kaiju of this sci-fi world.  Investing in all-new, larger scale sculpts for a property with no media tie-ins was a gamble, but it most definitely paid off for NECA.  The result of their effort was a horde of fierce and hefty hunks of plastic looking great on our toy shelves, and the line isn’t slowing down any time soon! 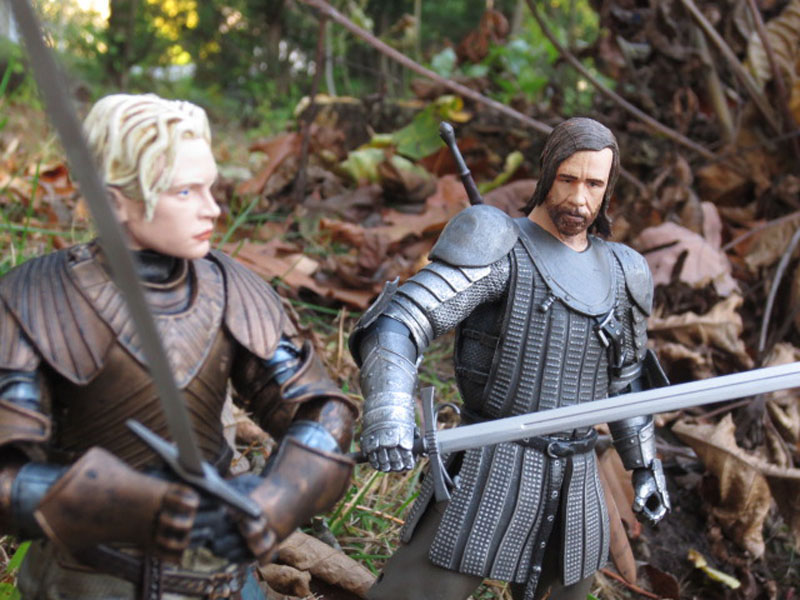 As 2014 began, the big buzz was Funko, the makers of the Pop Vinyl figures, with their uncanny breadth of distribution.  This was the year that Funko expanded with several new umbrella lines, and one of them was their 6″ scale, fully poseable Legacy Collection, which debuted with HBO’s Game of Thrones as their first license.  While the figures in this series suffered some growing pains– especially in terms of quality control– the sculpting was incredible and the overall sense of design for the figures was quite well done, especially for Funko’s first foray into this level of detail and articulation.  Fans had been clamoring for Game of Thrones toys since the HBO series made its debut, and Funko delivered exactly what many of us were hoping for out of this line. 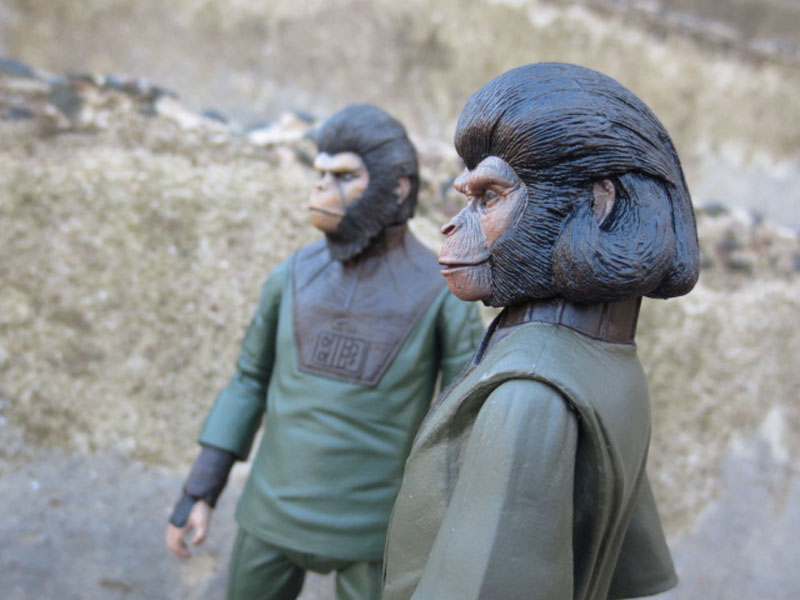 One of NECA’s biggest new properties this year was Planet of the Apes.  They landed the license in order to release some (very nice) figures based on Dawn of the Planet of the Apes, but along with those modern era figures, they also released the characters from the classic Apes film series.  It’s been over four decades, but thanks to NECA we finally have highly detailed, film accurate action figures of iconic characters like Dr Zaius, Zira, Cornelius and General Ursus, and the toymakers really knocked it out of the park on these figures, in terms of design, articulation, and film accuracy.  I’m hoping POTA becomes the next Predator-style line for NECA… it’s a big universe to tackle, and they’ve already proven they are the right people to capture it in plastic. 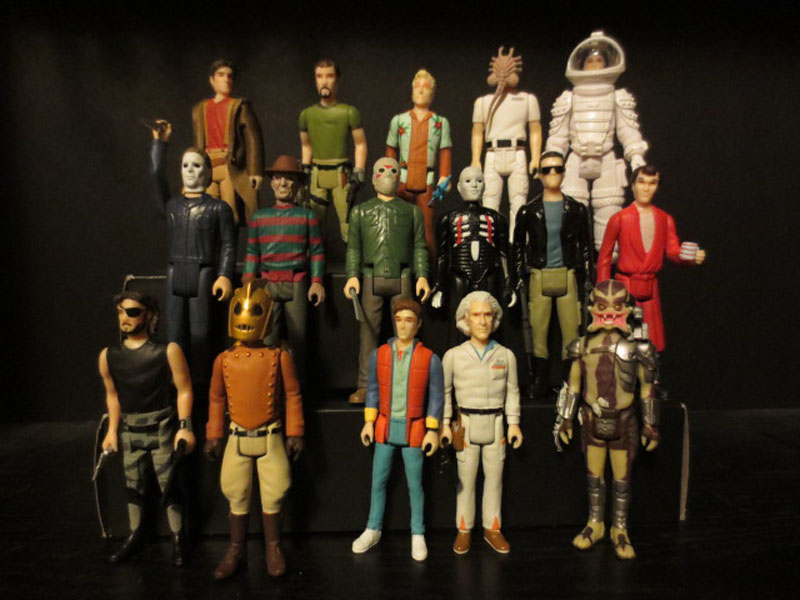 Not everyone will agree with ReAction being on the list of best toy lines of the year (and even fewer will agree with them being considered the year’s second best overall), but I don’t care– this series is great.  Yes, the quality was a little all over the place, but when the designs by Super7 were on, they were ON.  And even on the weaker figures in the overall lineup, their retro card art still made them feel like authentic vintage toy throwbacks.  More than anything, it was the ambitious scope of this line– releasing over 50 figures from all corners of the geek universe from Back to the Future and The Goonies, to Buffy and Firefly, to Pulp Fiction– that made it truly impressive.  The ReAction figures have been well distributed, and their affordable $10 price tag made them one of the easier toy lines to casually collect.  There’s been no hunting involved, but over the past few months I have amassed way more of these little guys than I imagined I would.  And I feel my toy collection is better for it.

Marvel Legends is a toy line that has reinvented itself time and time again, but it was Hasbro’s 2014 concept that really connected, launching the line beyond its long-standing status as a collectors’ darling and into mass market success.  Anchoring each wave of Legends around one of the Marvel properties at the box office– while still providing a mix of movie and comic book inspired figures– delivered the biggest number and most diverse selection of Legends figures we’ve ever seen in a single year.  And the movie toy budgets Hasbro got to play with meant we saw an impressive amount of new and unique tooling, along with many other features we’ve always dreamed of in this line– large scale Build-A-Figures, alternate heads and hands, accessories and more!

Some figures this year have been just plain stunning– the STRIKE Suit Captain America, AIM Soldier, Black Widow, Carnage, Star-Lord, Gladiator, Ms Marvel, Spider-Girl… the list just goes on and on– and we’ve seen a wonderful increase in the number of female figures and an equally welcome decrease in variants of the main characters (keep in mind, there was only one Spider-Man figure in the Spider-Man Legends series).  Even the new packaging– collector-friendly window boxes which do a great job of showcasing the figure while taking up decidedly less space than a blister card– add to the appeal of this line.  And by releasing each wave as its own unique sub-series, Hasbro finally freed up their notoriously clogged retail distribution channels, making this year’s Legends some of the easiest to find, as well as the best overall, in the history of this long-running line.