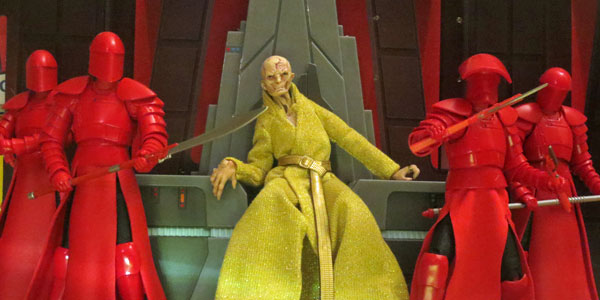 Putting this year’s “best toy lines” list together… actually really surprised me. 2017 saw some exciting new series make their debut, some other long running lines draw to a close, and still others release more items than usual, and with more frequency. It– along with many other factors– made the year feel extra long, so when I looked all the way back to January I was genuinely surprised to discover how comprehensively strong some of 2017’s best toy lines were over the past twelve months.

There was a nice mix of series that feel satisfyingly complete after only a single year, and others whose potential makes me excited to see where they will go in 2018. But more than anything, the year was full of lots of great character selections, excellent designs, and super fun toys.  Here are the best lines those great toys were a part of: 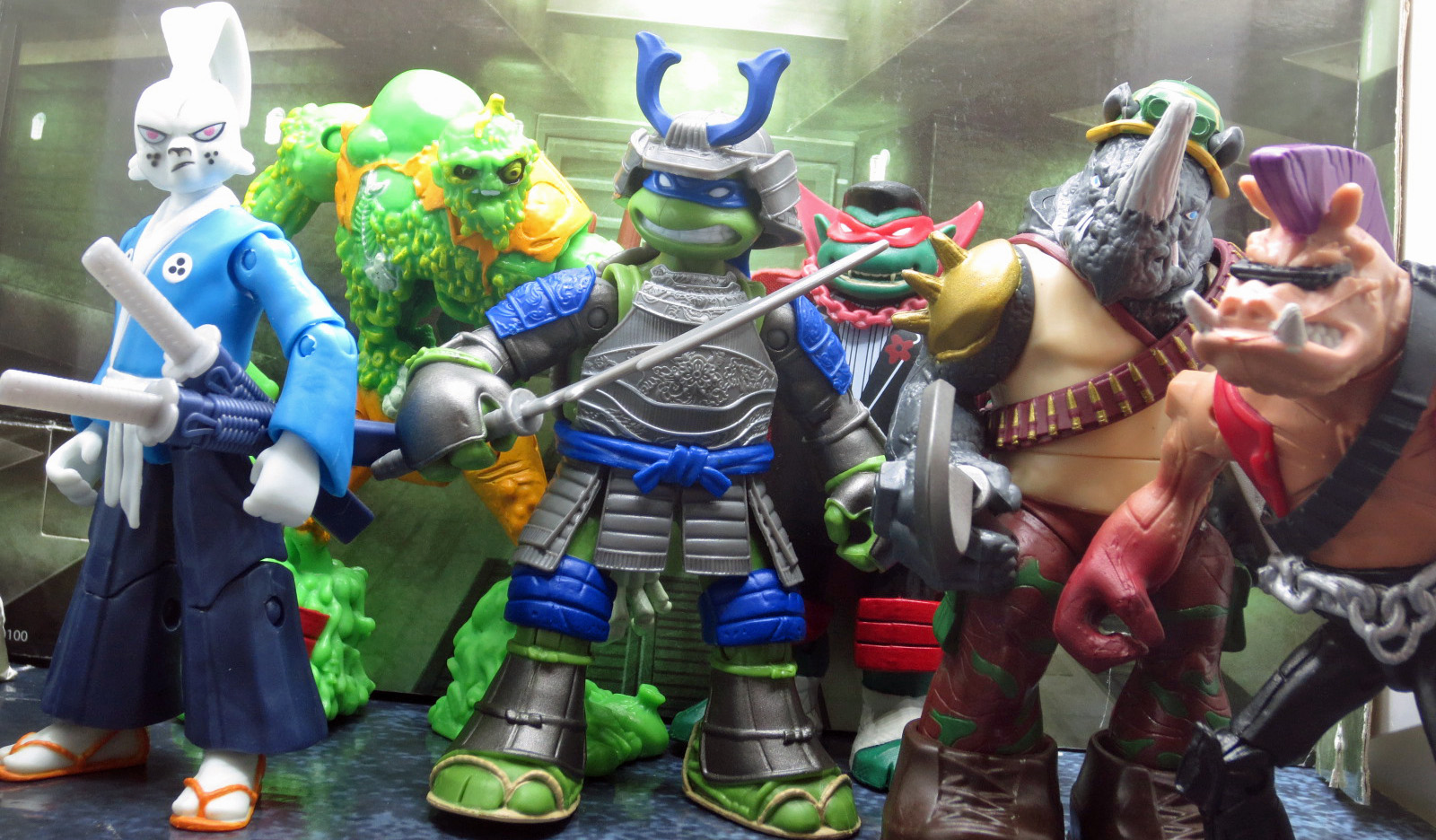 It’s been an epic run for Playmates with their current Teenage Mutant Ninja Turtles toy line, based on the Nickelodeon animated series. Since 2012, we’ve seen dozens of variants of the heroes on the half shell, along with their friends and foes… many of whom were based on characters and toys from the Turtles’ classic cartoon and vintage toy line. Sadly, 2017 ushers in the end of this iteration of the Ninja Turtles (and with it, Playmates’ current toy line), but they’re going out on top, with lots of great additions to this fun toy line. Whether it’s nods to the 80s toy line, such as Muckman and the Monster Turtles, all new ideas that tap into the delightful weirdness TMNT has always been known for (Ghostbusters Turtles, anyone?), or welcoming Usagi Yojimbo back into the fold, with his best action figures ever… 2017 delivered for Turtles fans, and Playmates left their toy line feeling satisfyingly complete by the end. 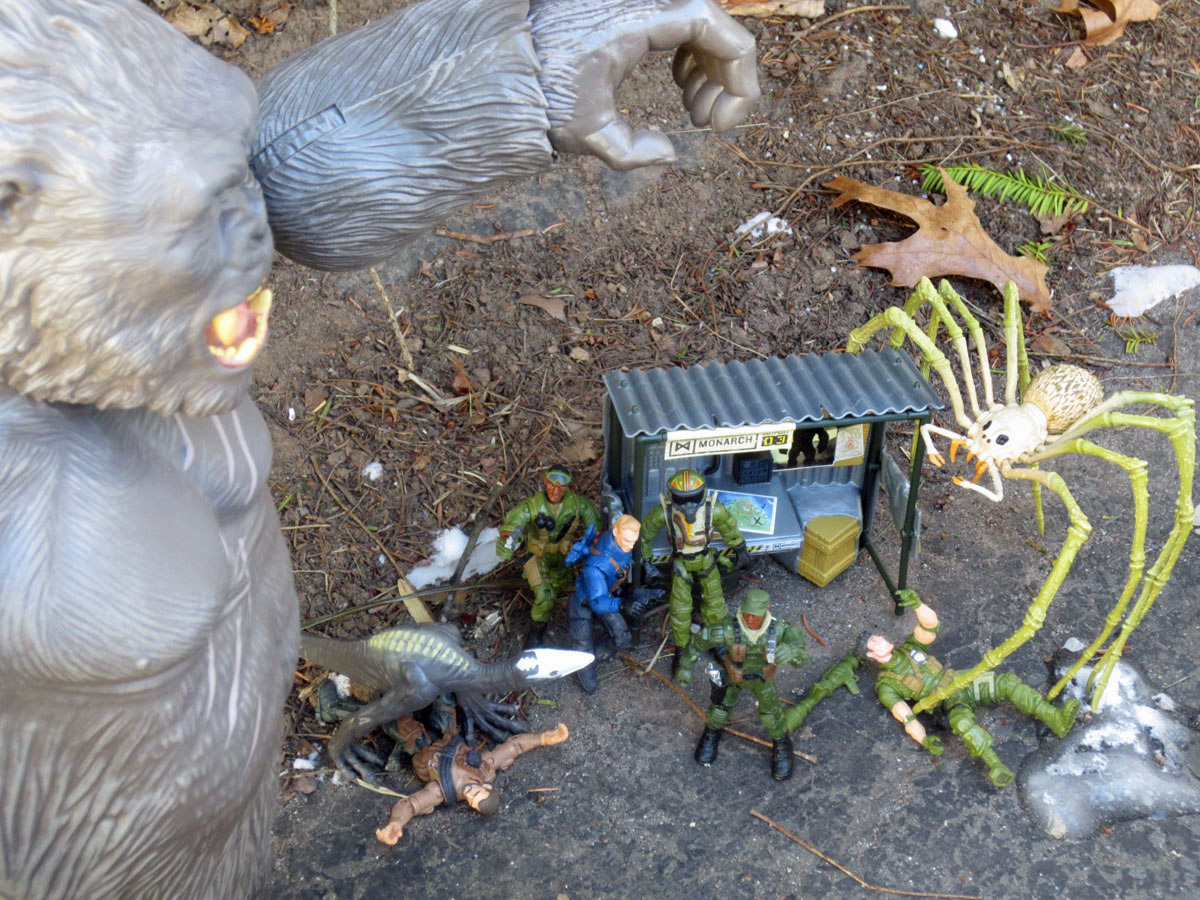 If you told me a year ago that a toy line by Lanard would wind up on my best of’s, I’d have called you crazy. But the series they put together for Kong: Skull Island is just like the movie itself– fun, cool, and way better than it has any right to be. Sure, the figures, vehicles and accessories are a bit crude, all reused from Lanard’s long running GI Joe ripoff series The Corps. But the actor likenesses of Samuel L. Jackson and Tom Hiddleston were surprisingly on point, the all new monster sculpts were really well done, and the deluxe 18 Kong was actually kind of great, with a movie accurate sculpt and some excellent upper body articulation that allows him to beat his chest just like on the big screen. The way everything was packaged was also great, with every single set including a human figure with lots of gear, and a vehicle and/ or some manner of creature, which allowed each purchase to be its own self contained playset. There were better looking, higher quality toys released in 2017, obviously. But few of those were as fun, or worked better as TOYS than the Kong collection. 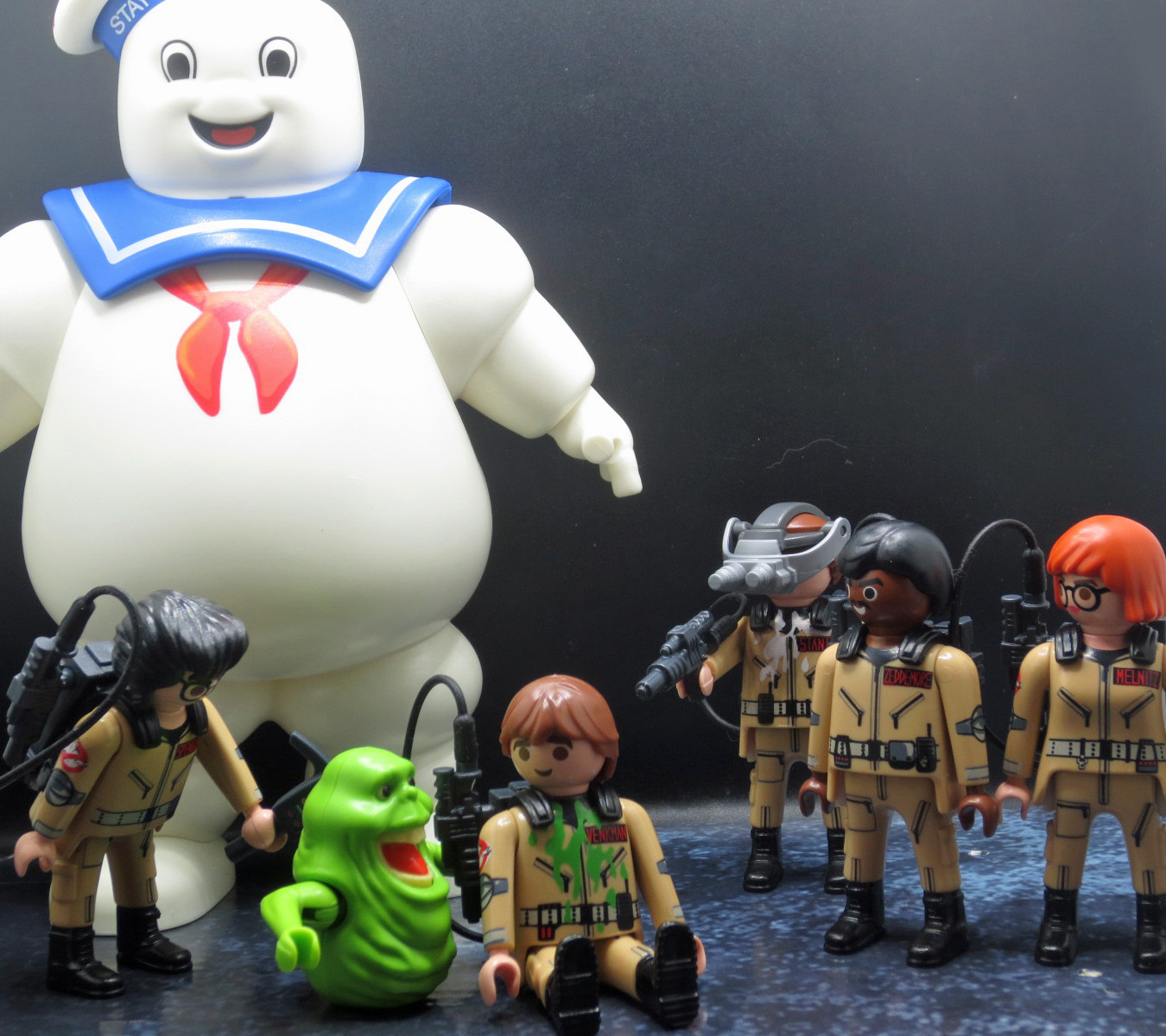 2017 saw Playmobil expand into licensed properties for the first time, ever… and they crushed it right out of the gate with Ghostbusters. The series featured familiar Playmobil people decked out in tan jumpsuits, sporting great looking, slightly stylized versions of the Ghostbusters’ gear, be it the Proton Packs, PKE Meters, or Ghost Traps. The Busters were joined by a variety of ghosts, the Ecto-1, several iconic environments from the first movie, and an excellent in scale Firehouse playset. Playmobil’s take on the Ghostbusters found a perfect way to bridge the gap between detailed accuracy to the film and characters, while maintaining the classic Playmobil style. But what earns the Playmobil Ghostbusters a spot on this list, more than anything, is how complete the collection feels, after just one year. We got all four Ghostbusters, the main supporting cast, the most iconic ghosts, the Ecto-1, AND the firehouse… all at once. It’s a great collection, and I love that you can literally collect the whole thing in one single visit to the store. 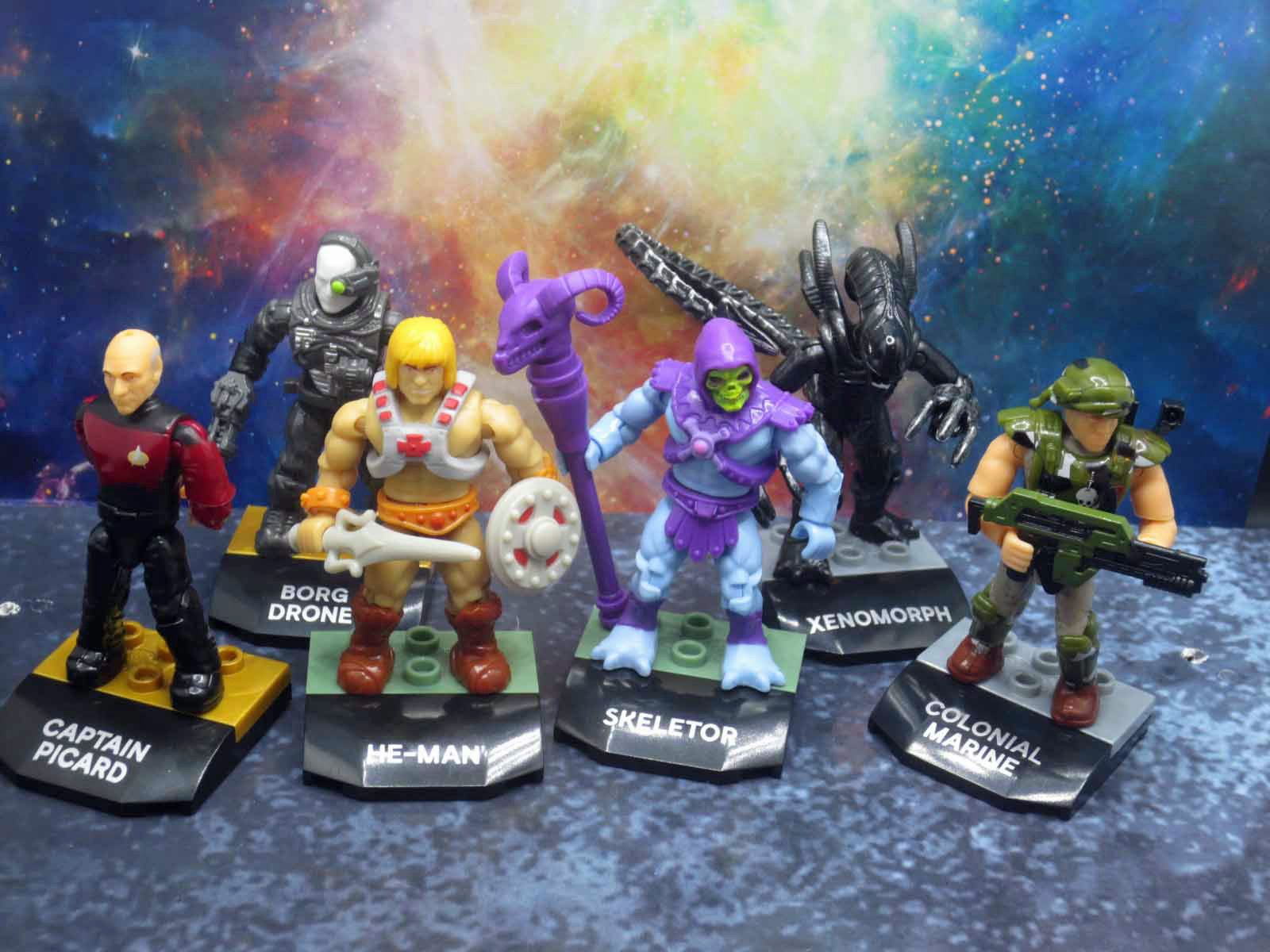 Here’s another new line which was a total surprise! Mega Construx never officially announced Mega Heroes, their line of minifigures drawing from a variety of properties such as Masters of the Universe, Aliens, Star Trek, and Futurama… instead they hid the first wave of figures in a display at San Diego Comic Con, about a month before they surfaced at retail. That release pattern was fun on its own, but the minifigures themselves are awesome! We’ve been waiting for years for He-Man and his fellow Masters of the Universe to make their minifig debut, and Mega Construx’s first figures (He-Man and Skeletor) did NOT disappoint. The Aliens Xenomorph and Colonial Marine were surprisingly addictive army builders, and Mega Construx advanced to The Next Generation with their Captain Picard and Borg Drone figures. So the lineup is great, and the figures themselves are super fun! It seems like Mega Construx is sort of using this umbrella line as a “farm league” to gauge interest on expanding these properties with more figures and building playsets… all that potential makes this one of the most exciting toy lines on shelves at the moment! 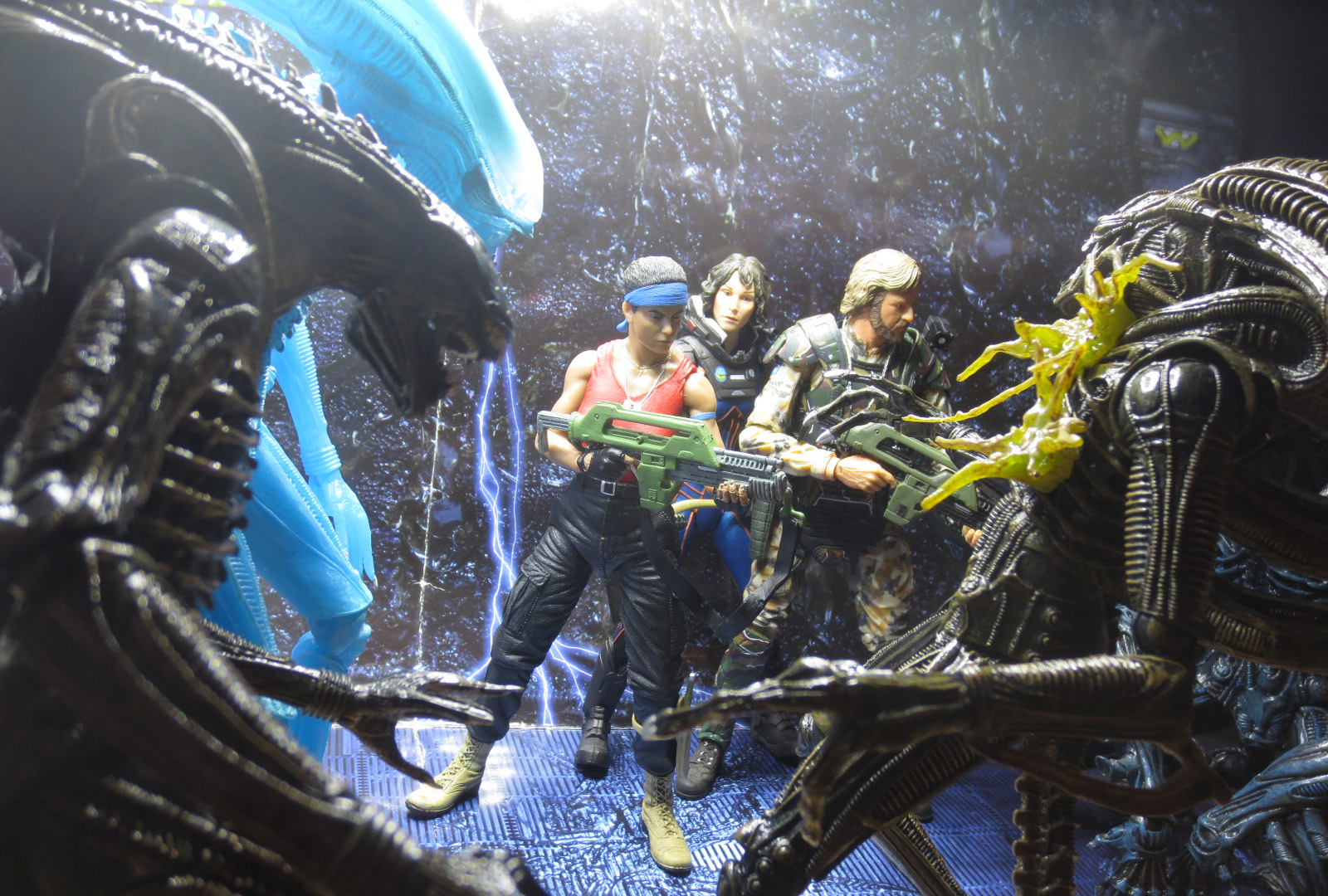 NECA’s Aliens series kept rocketing along in 2017, and they covered a lot of ground! We saw new characters from the original two films, such as Lambert and Burke, along with upgrades to the Xenomorph drones that added articulation and enhanced overall durability of the creatures in toy form. Plus, the creatures from Alien Covenant made their toy debut, along with the final wave of figures from Prometheus, saved from cancellation nearly half a decade later. And that’s just the movie based stuff– this year also let NECA flex their creative muscles, with fun and off the wall releases such as the Sewer Alien (based on the Pizza Monsters from the classic Teenage Mutant Ninja Turtles cartoon!) and Colonel Cameron, a Colonial Marine with the visage of director James Cameron. Rounding everything together was the launch of the NECA X Alien Club, a direct to consumer service which provides hardcore collectors early access to new Aliens toys, along with exclusives such as the outstanding 3D pop-up dioramas, inspired by the artwork of the vintage Kenner Aliens toy line. No matter what corner of the Aliens universe you love the best, NECA delivered in 2017. 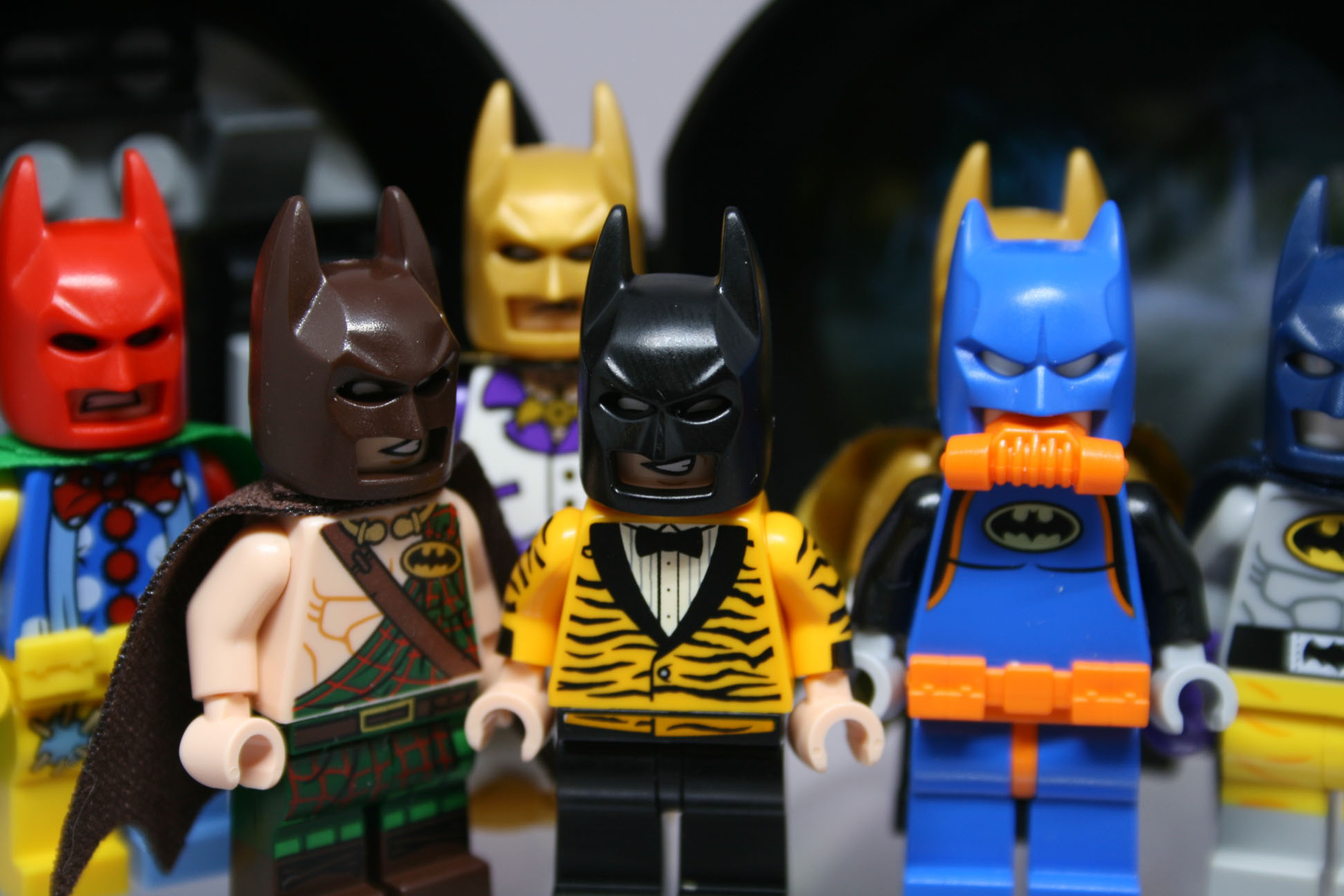 The LEGO Batman Movie was hilarious, and loaded with characters, cameos, and in jokes from all over the DC Universe. And LEGO’s toy line paid service to pretty much everything we saw on the big screen! With a wide variety of building sets ranging from mini kits to massive playsets, you could collect and build virtually every major set piece seen in the film, and populate it with all the fun DC characters featured on screen thanks to the multiple assortments of minifigures. These little guys not only included fun variants of Batman and his Bat-family, but most of the Rogues’ Gallery and the Super Friends, as well! Despite the huge breadth of this ambitious collection, LEGO managed to release the whole thing in one calendar year. That’s no small feat! 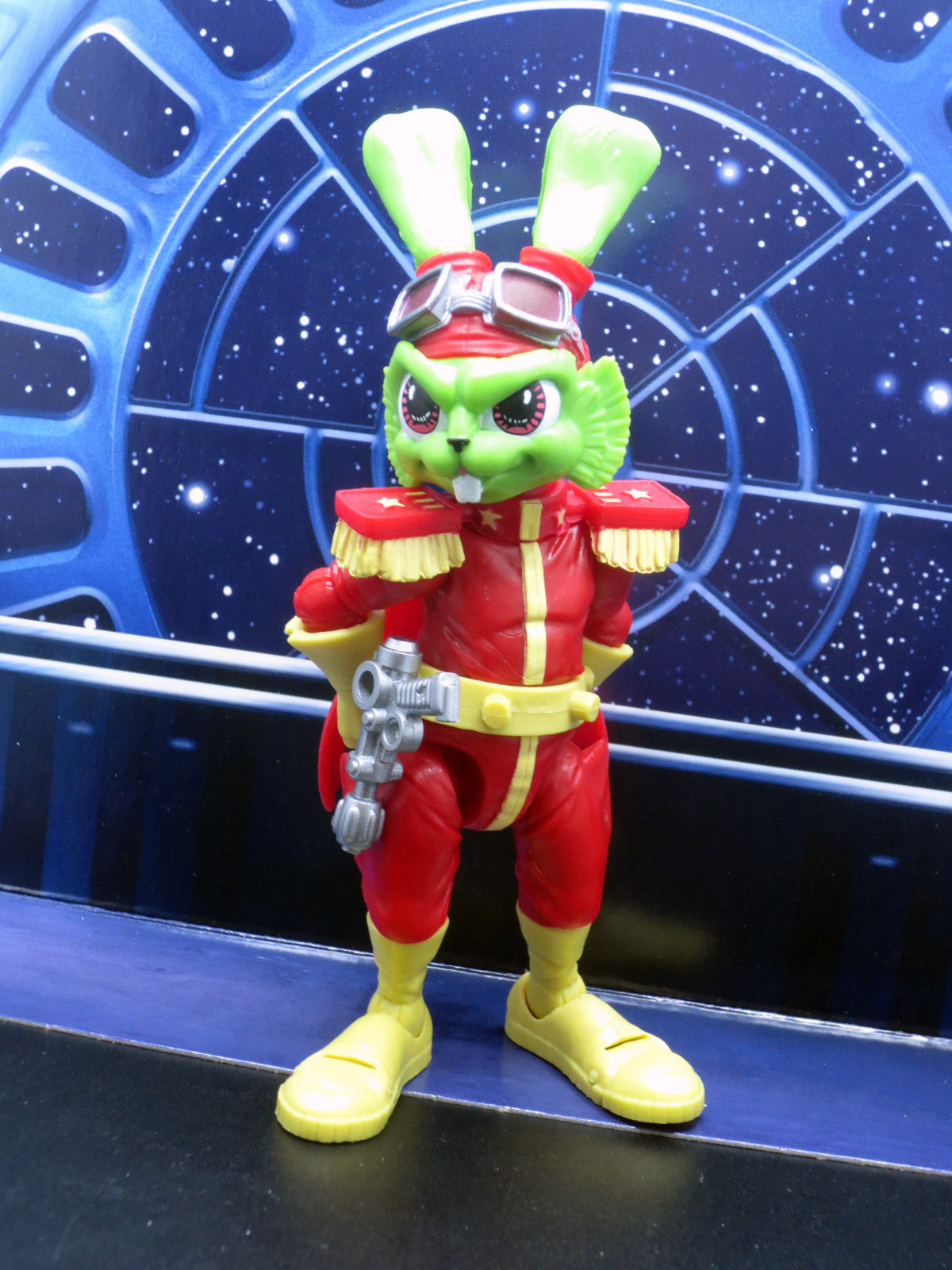 Boss Fight Studio’s Bucky O’Hare line may only be two figures deep (First Mate Jenny and Bucky, himself), but when those two figures are this stunning, it’s impossible to ignore the toy line that features them. Bucky was an ambitious project for Boss Fight, involving 100% new tooling for each figure, a brilliant design packed with useful articulation which minimizes impact on the high quality, comic accurate sculpting, and great accessories and alternate parts such as variant expression face plates. The execution is, in a word, perfect… and I am beyond excited to see this great collection grow in 2018 and beyond! 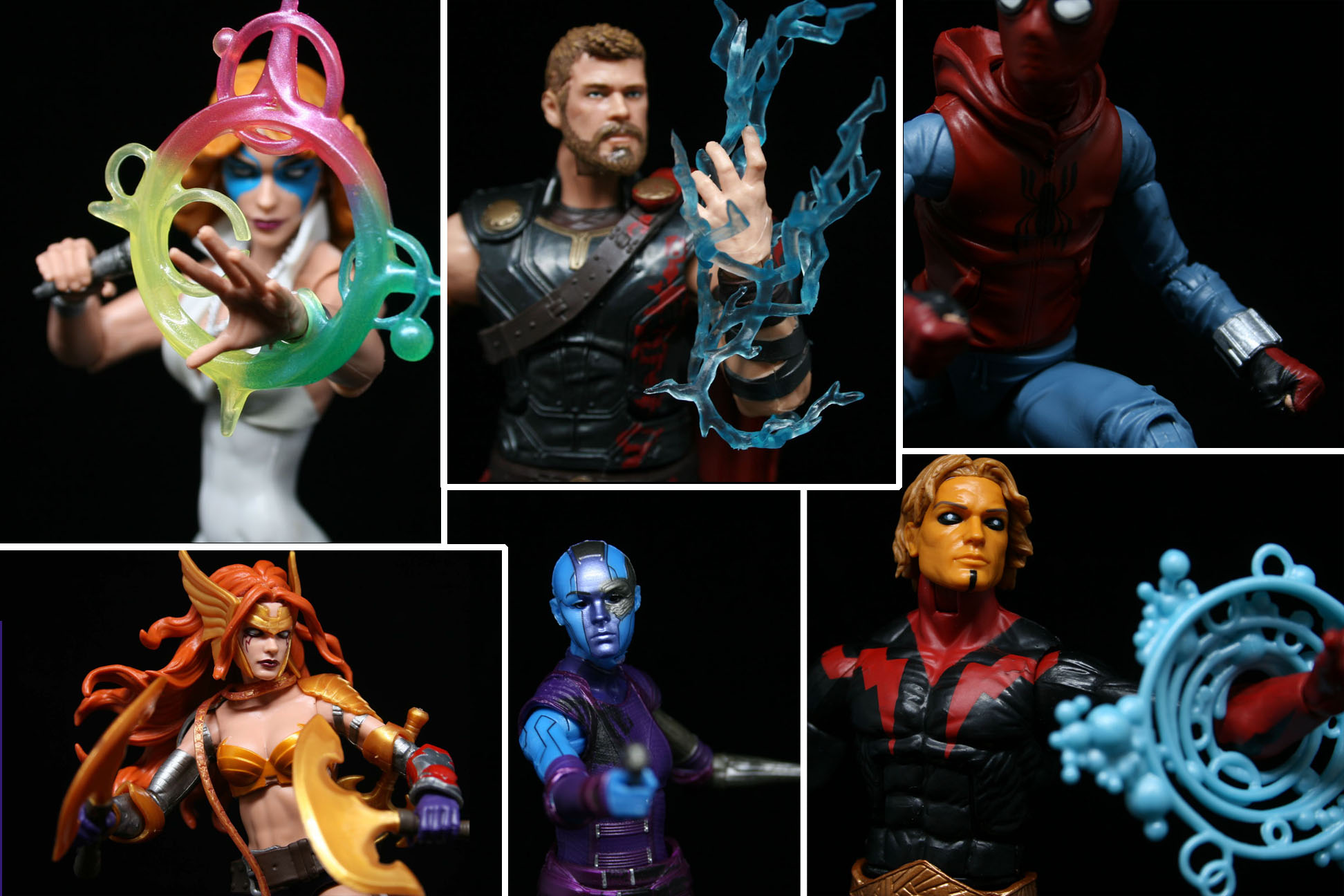 Is there a world where Marvel Legends didn’t make this list? I don’t think so. The long running 6″ toy line from Hasbro had another banner year, releasing a smart mix of characters based on the Marvel Cinematic Universe, the modern comic books, and the classic Marvel Universe so many of us grew up with. But 2017 also featured the first Marvel Netflix toy releases, and the outstanding new face scan paint technology, which ups the actor likenesses for movie and TV figures dramatically. As a comic reader, I appreciated Hasbro’s commitment to continuing team-specific looks on figures such as the Jim Lee Cyclops, and revamping characters released a decade earlier by Toy Biz. As a Marvel movie fan, I appreciated how many more villains and supporting characters we saw get the toy treatment this year. Factoring in a wide range of retailer exclusives and the fun 90s Vintage tribute series, Marvel Legends only cemented its position as one of the best toy lines of all time. They’re looking backward to draw from Marvel’s celebrated past, but their sights are just as focused on Marvel’s bright future at the same time. 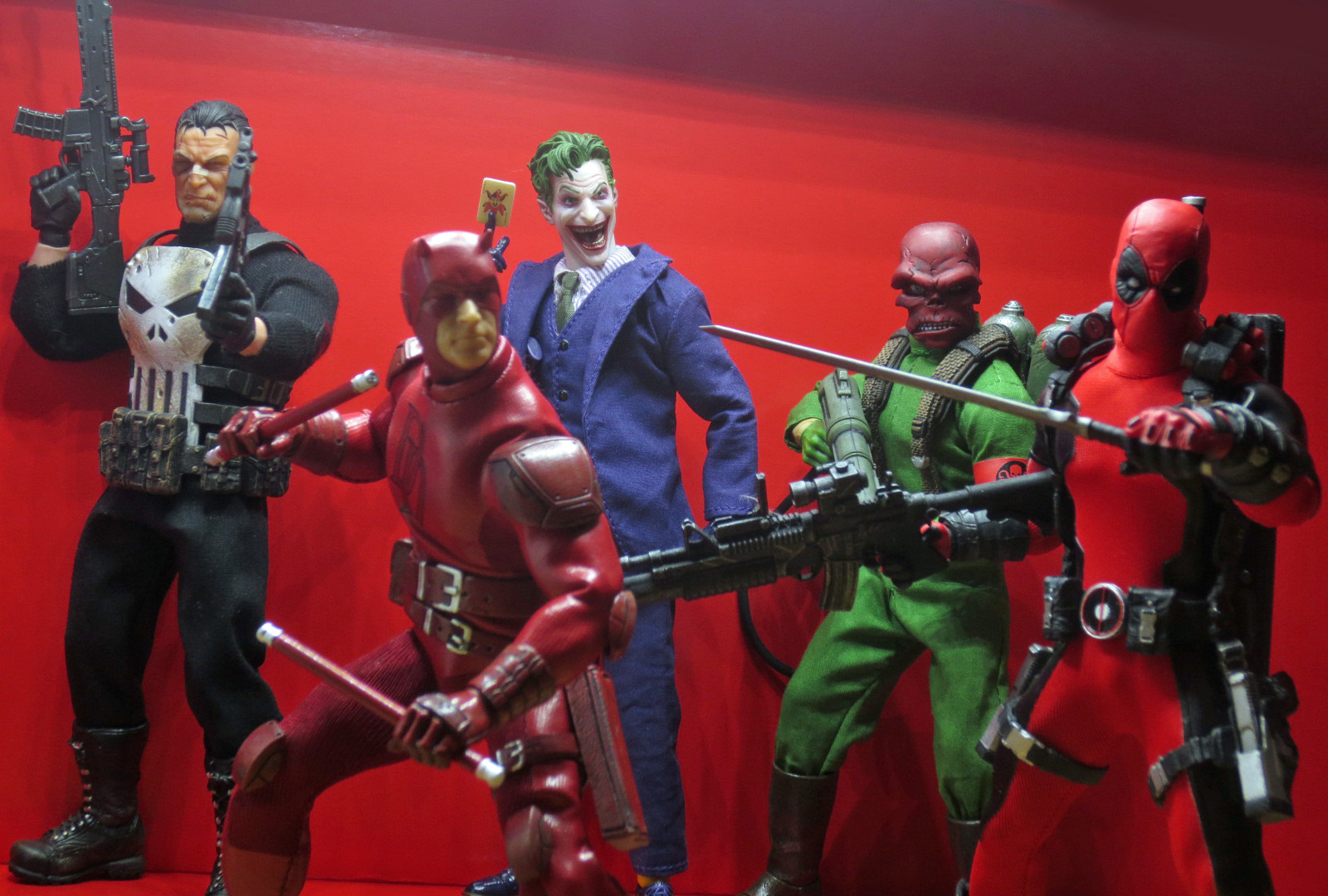 Mezco made the big expansion of their incredible One:12 Collective last year, but they really came into their own in 2017. Virtually every figure they released this year was not just a winner, but a candidate in their own right for best action figure of the year. The Punisher, Red Skull, Batman v Superman Batman, The Joker, Deadpool… the cavalcade of all-time best action figures just kept coming. Quality and ingenious design have made the One:12 an all time great, even though they’re still hindered by production and release delays, which pushed several other very promising figures into 2018. But the end result is so great with One:12 figures, they truly epitomize the old saying, good things come to those who wait.

I didn’t plan on ranking Star Wars The Black Series even in the top half of this list, until I looked at Hasbro’s overall output throughout the last twelve months. In that time, we saw the (almost) completion of the Rogue One team with the awesome Baze Malbus and Chirrut Imwe figures… welcomed eagerly anticipated OT characters like Lando Calrissian, the Emperor’s Royal Guard, the Tusken Raider, the Jawa, and the Death Star Trooper to the collection… and built up sub-sets like the prequels (with the great Qui Gon Jinn) and Rebels (with outstanding new releases like Hera and Grand Admiral Thrawn). And all that is BEFORE The Last Jedi made its toy debut on Force Friday II, updating the core cast of the New Trilogy, along with modern versions of Luke Skywalker and General Leia, and lots of great new characters making their plastic debut, wwhether it’s Supreme Leader Snoke and his Praetorian Guards, or Resistance heroes Rose Tico and Maz Kanata. One of the major flaws over the last few years was a huge delay between spring releases and the rest of the year’s Black Series being relegated until after September 1st, but 2017’s 40th Anniversary filled the gap brilliantly, re-releasing many hard to find Black Series figures of the past, along with the last new figures needed to re-create the Original 12 toys from back in 1977. We also got to enjoy several great new in scale vehicles, Centerpiece dioramas to enhance and display shelf, and awesome environmental display bases such as Snoke’s Throne Room, which lent themselves perfectly to “deluxe” versions of key figures from The Last Jedi. The consistent release pattern Hasbro employed doled out all these great figures slowly but surely… but when you look back retrospectively at the full lineup of truly outstanding figures which came out this year, it’s impossible to deny that The Black Series is THE toy line of 2017.