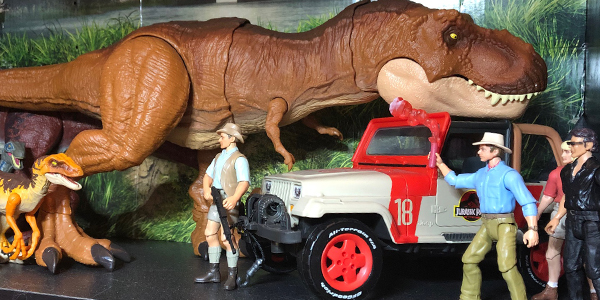 We’re counting down the ten best toy lines of the year!

2018 was another banner year for long-running toy lines like Marvel Legends and Star Wars, and a resurgence for previous stalwarts like Mattel’s DC Multiverse, but it was the exciting new toy lines which impacted me the most. Here’s my picks for the ten best toy lines of the year. 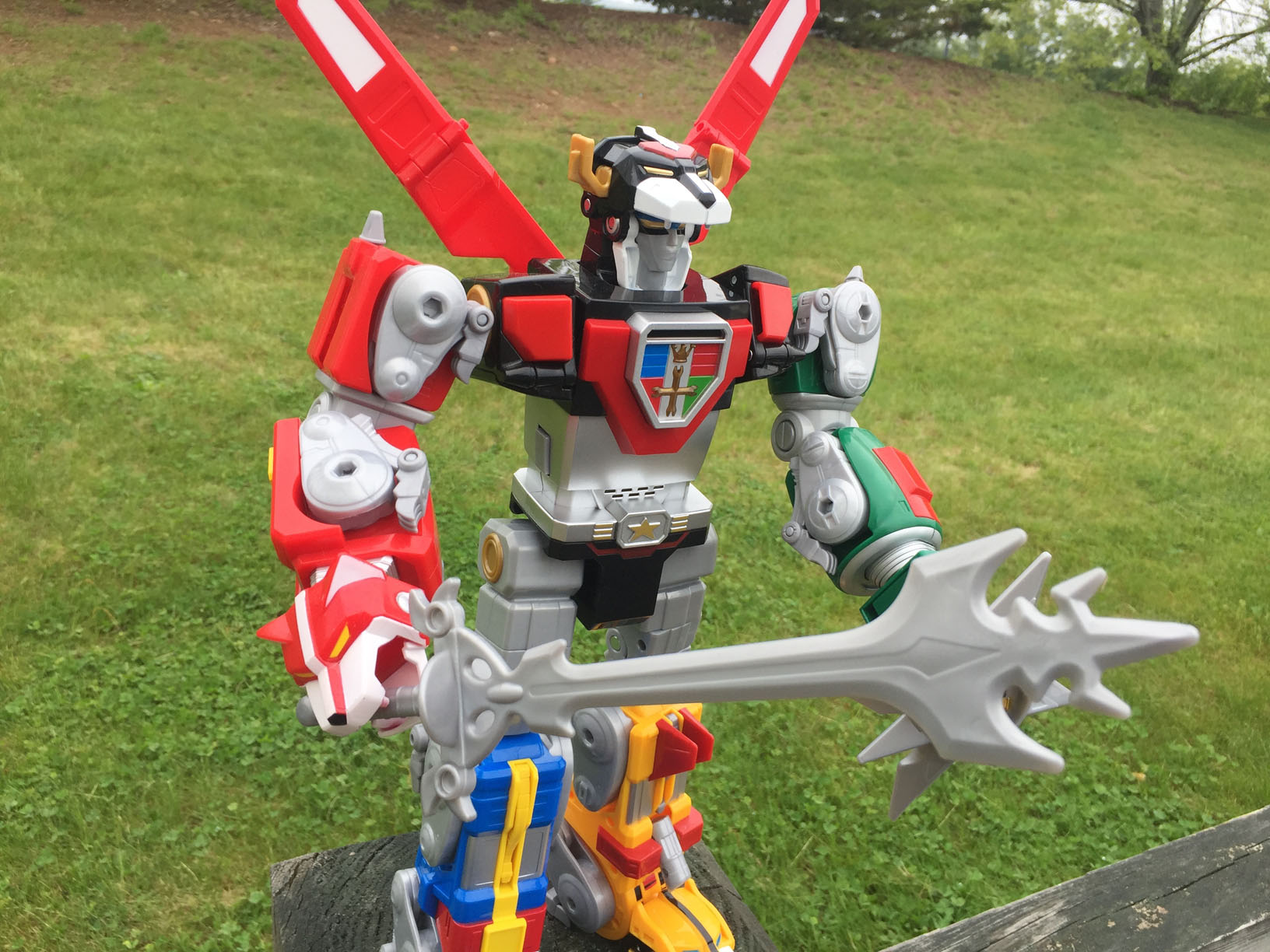 Late last year, Playmates dropped a teaser that their Voltron license didn’t just cover the Netflix animated series, but also the classic 80’s cartoon, with the reveal of the five lions based on the vintage series. Sure, we saw these same lions released by Mattel a few years ago, but for those that missed out this seemed like the perfect opportunity to revisit the Voltron of yesteryear. And it certainly was– each of these five lion figures is well made, with toon accurate designs and useful articulation… and the combining feature was very effective, working much better than other Voltron toys of the past. 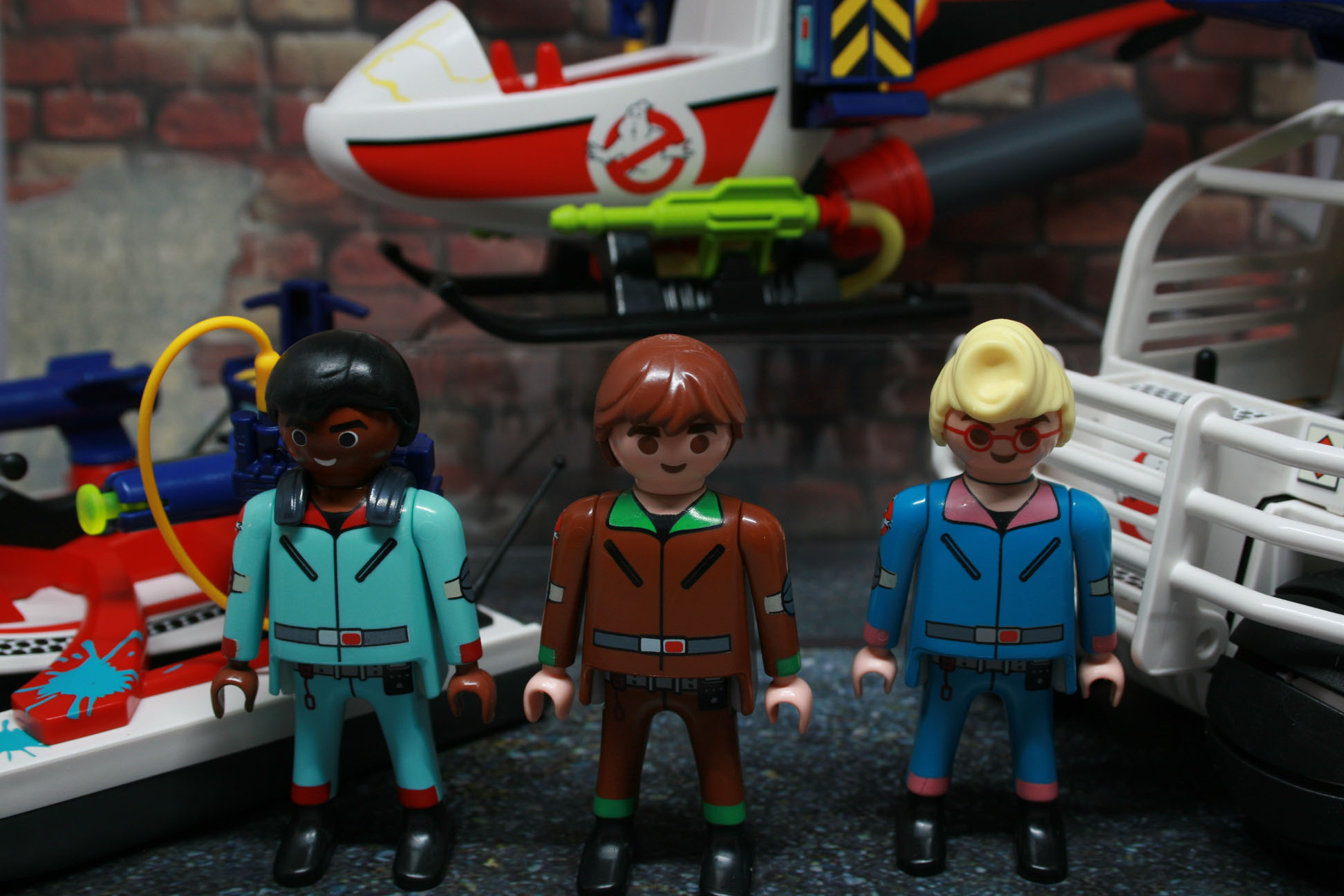 I was charmed by the inventive, entertaining Ghostbusters line released by Playmobil in 2017. And this year, they followed it up with two new waves of toys which matched the fun of their licensed products. While Playmobil basically tackled the first movie with their first year’s toy line, they expanded to include both Ghostbusters II and the Real Ghostbusters animated series in 2018. Along the way, they also added cool action features and vehicles to the animated line, and a new bit of ghostly technology to the sequel sets which kept these great toys feeling relevant, while building upon the impressive first year of toys they already established. 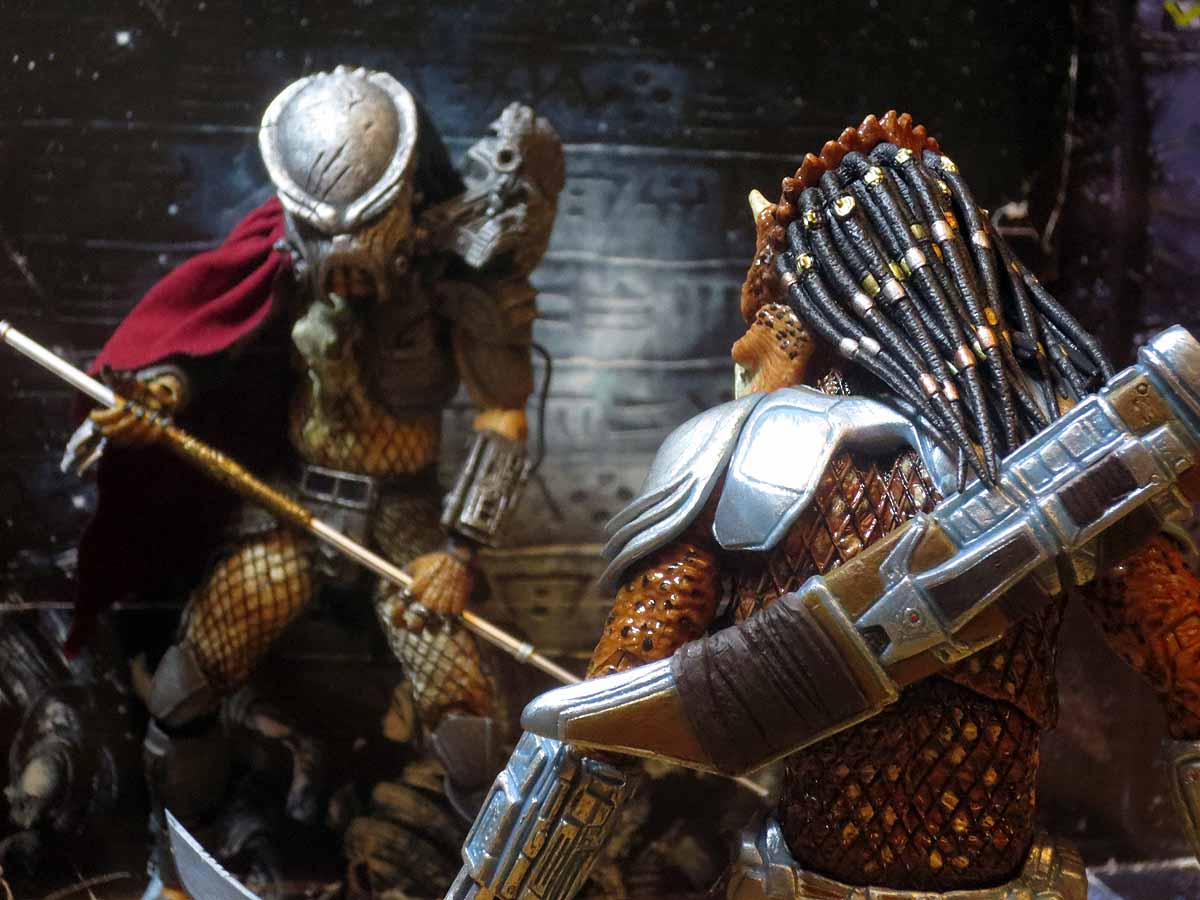 It felt like 2018 was a light year for NECA’s longest running toy line, but in retrospect we got a healthy number of new Predator releases, and each of them proved why NECA is one of the best toymakers out there. Whether it’s the fantastic all new Fugitive Predator from this year’s Shane Black film, perfect updates to older figures like the elusive Ahab and the Bad Blood Predators, or the release of the long-awaited Dark Horse series, including the first ever 7″ Machiko action figure, there was something for everyone in this mix. 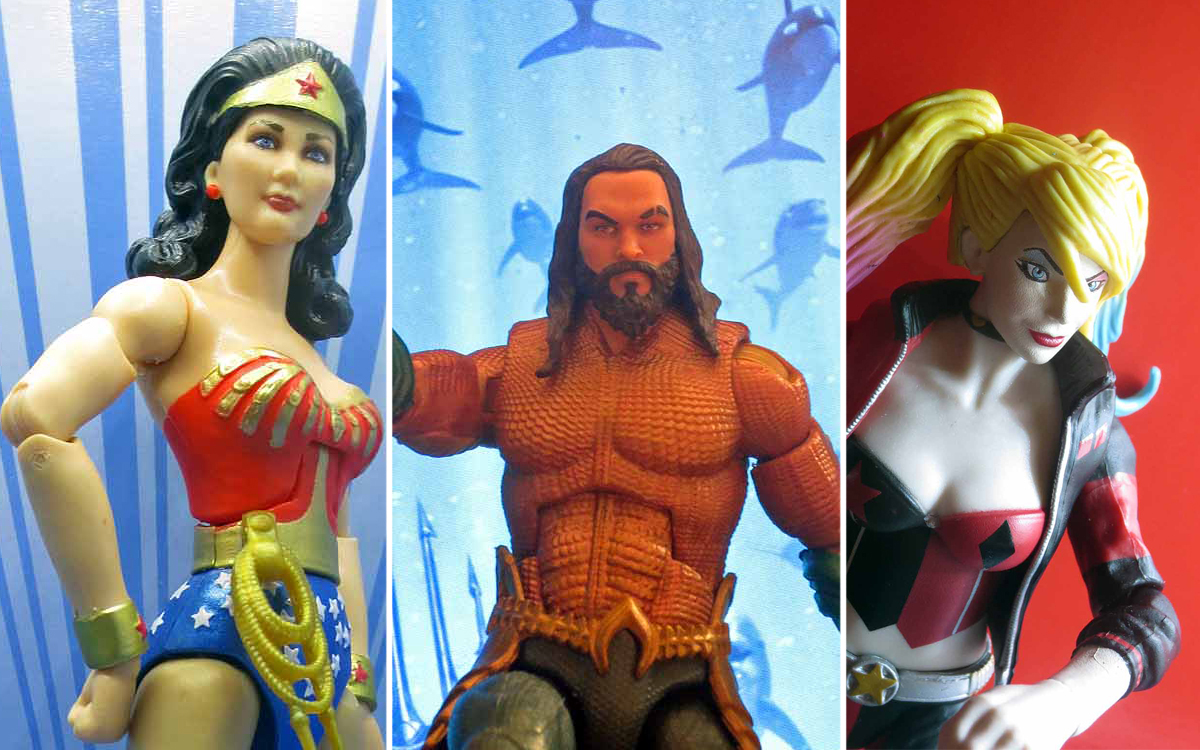 For a few years now, it seemed like Mattel’s DC license was dead in the water. This makes it doubly frustrating that in 2018 A) they finally stepped up their game and started releasing some genuinely great DC-inspired action figures, and B) they apparently lost the license to Spinmaster. I’m still processing the new master licencor news, but in the meantime I can say 2018 was a remarkable year for Mattel’s DC Multiverse line. Long considered an afterthought of the successful yet outdated DC Universe Classics collection, the Multiverse line came into its own over the past twelve months, releasing the first movie-based toys to feature real scan paint apps in their portraits (the Aquaman movie collection), as well as some of the best artist tribute toys ever to hit mass retail, such as the Wal-Mart exclusive Harley Quinn. What hurts the most about the Spinmaster news is that, toward the end of the year, it seemed Mattel was genuinely starting to figure things out, and I would have loved to see what their three-year plan for this toy line was, apart from outside variables. 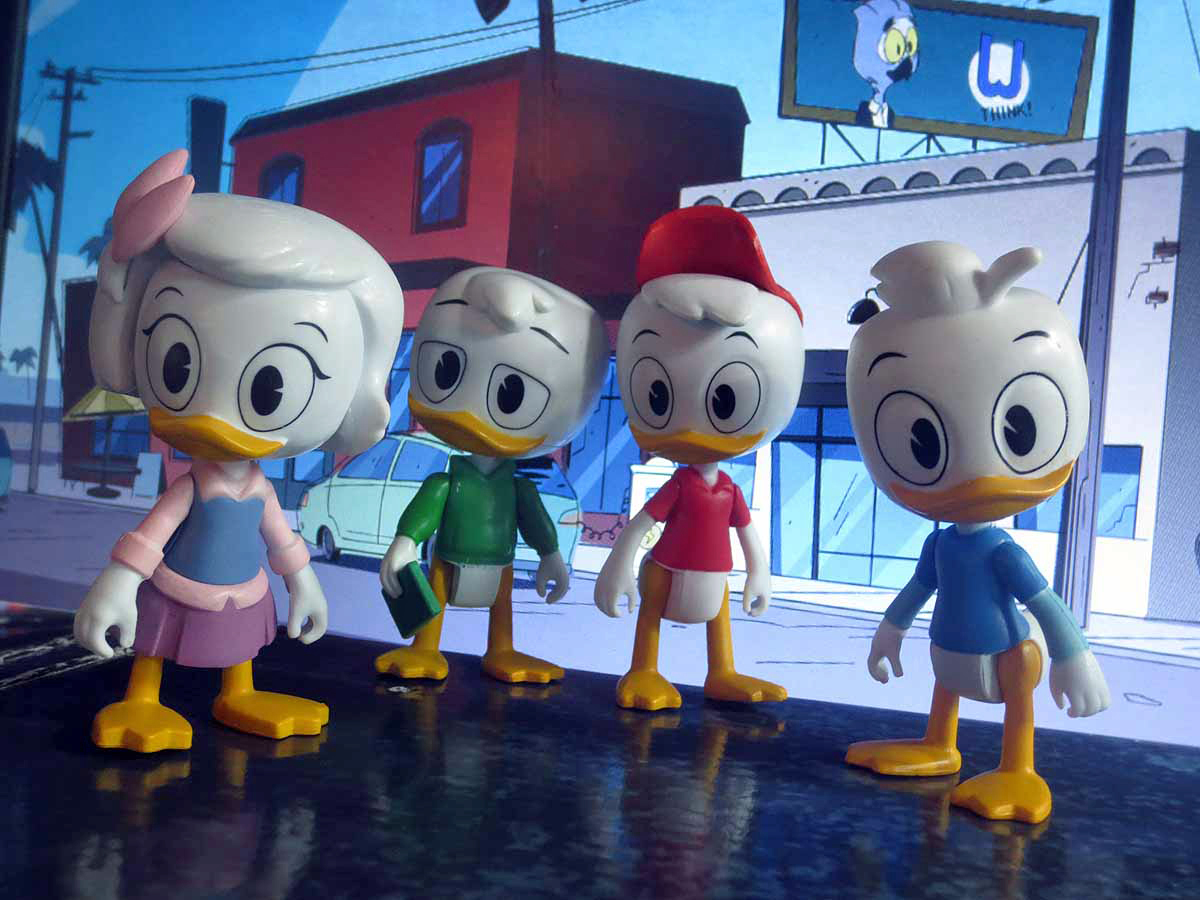 What makes for a truly great line of toys? I guess the answer is ultimately subjective, but for what it’s worth I consider it a combination of accuracy to source material, and overall fun factor. And on both these marks, Phat Mojo’s Target-exclusive DuckTales toy line ranks high. Based on the 2017 series, these figures perfectly capture the excellent modern-cum-Carl-Banks aesthetic of the show, and deliver the entire core cast (including chief antagonist Glomgold) in the first release. While lacking in super articulation,each of these figures matches their small-screen counterpart perfectly, and the choice of accessories (at least two per figure) is ingenious for any fan of the animated series. Of all the toy lines released in 2018, Phat Mojo’s DuckTales is the one which has me eagerly awaiting news of a followup in 2019, and I think that truly says something about the toymaker’s knowledge of this brand. 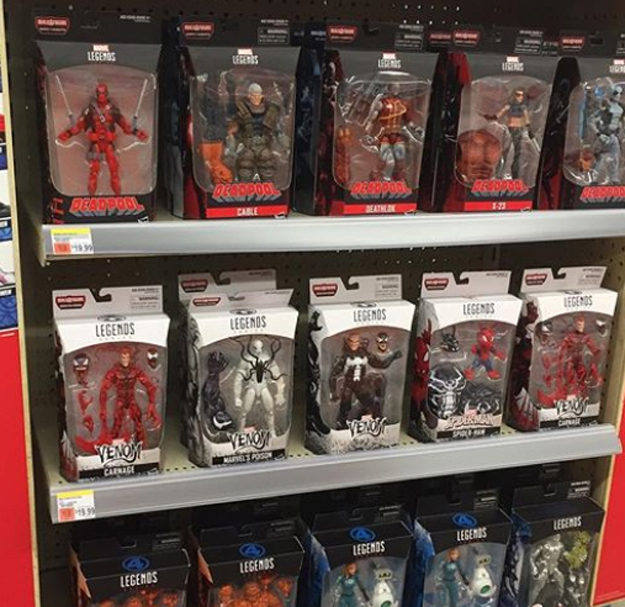 Let’s face it– if you’re an action figure collector, Marvel Legends is essentially undeniable. From the quality of the sculpting and design of each figure to the character selection, this toy line simply has to be appreciated for its longevity, depth, and ambition. 2018 was no exception, as it saw the release of no less than five toy versions of a Marvel mainstay that I simply cannot envision a better toy version of. This year also made great strides in completing some teams sure to spark nostalgia in many fans’ eyes, and a healthy amount of modern-day variants, making it one of the most diverse lineups of characters ever assembled for an action figure collection. 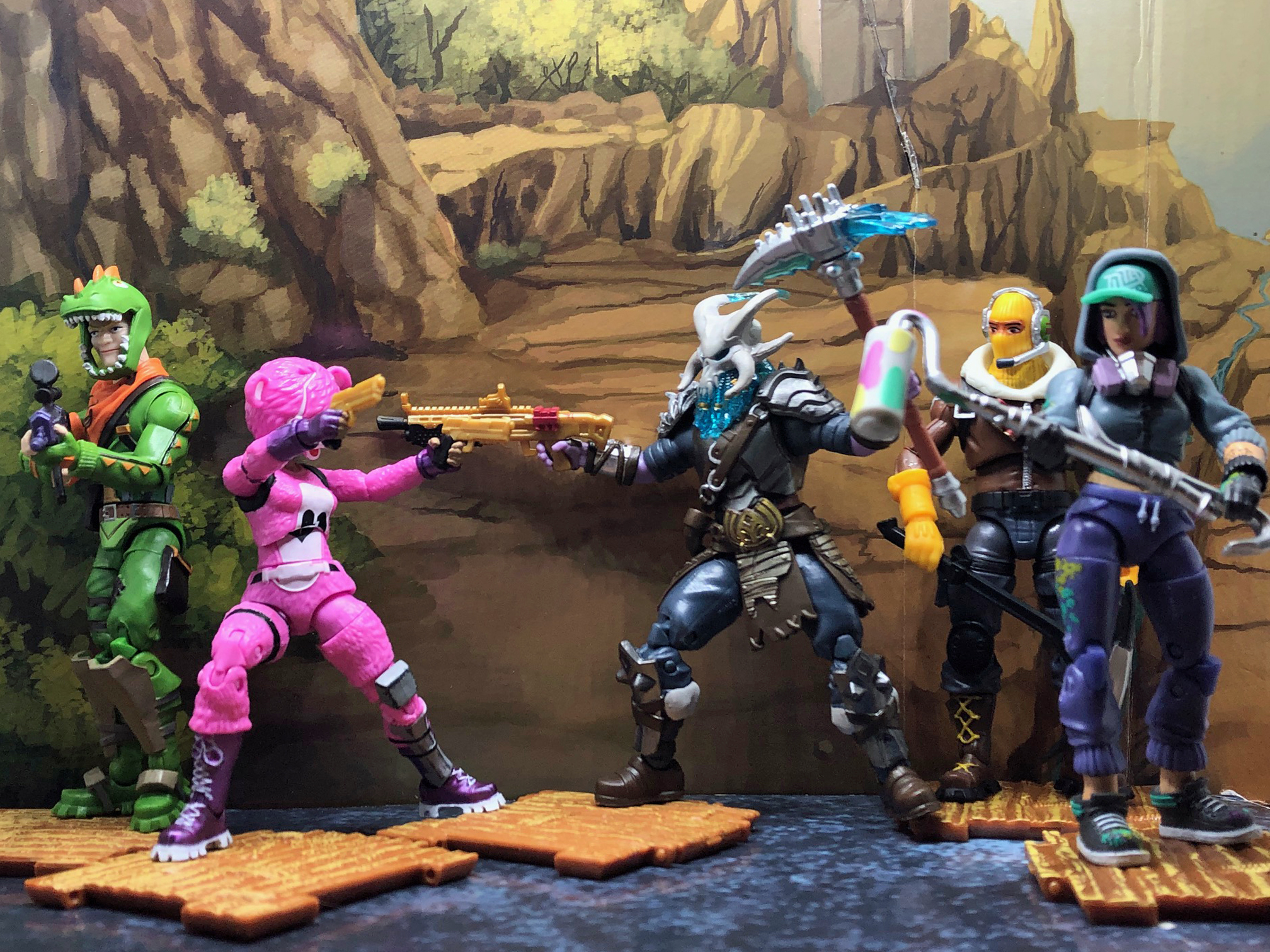 I’ll be the first to admit, I don’t know Fortnite from anything. I’m aware my niece and nephew love the game, and it’s wide-scope world seems appealing, but this whole trend honestly passed me by… until Jazwares launched their toyline this December. This whole concept had a couple things going against it. First, it debuted in the final month of 2018, which didn’t give a lot of time before year’s end. Second, Jazwares had never been known for quality action figures in the past… which is why it’s amazing that their Fortnite series would rank so high compared to everything else released over the previous eleven months. These figures are simply that good– they feature a ton of articulation, cool accessories, excellent sculpts which remain loyal to the game, and fun extras like the “building materials” which can serve as either display stands or components of an elaborate playset in which to pit your eclectic band of plastic warriors. I will readily admit, there have been few toy lines more fun than this in all of 2018. 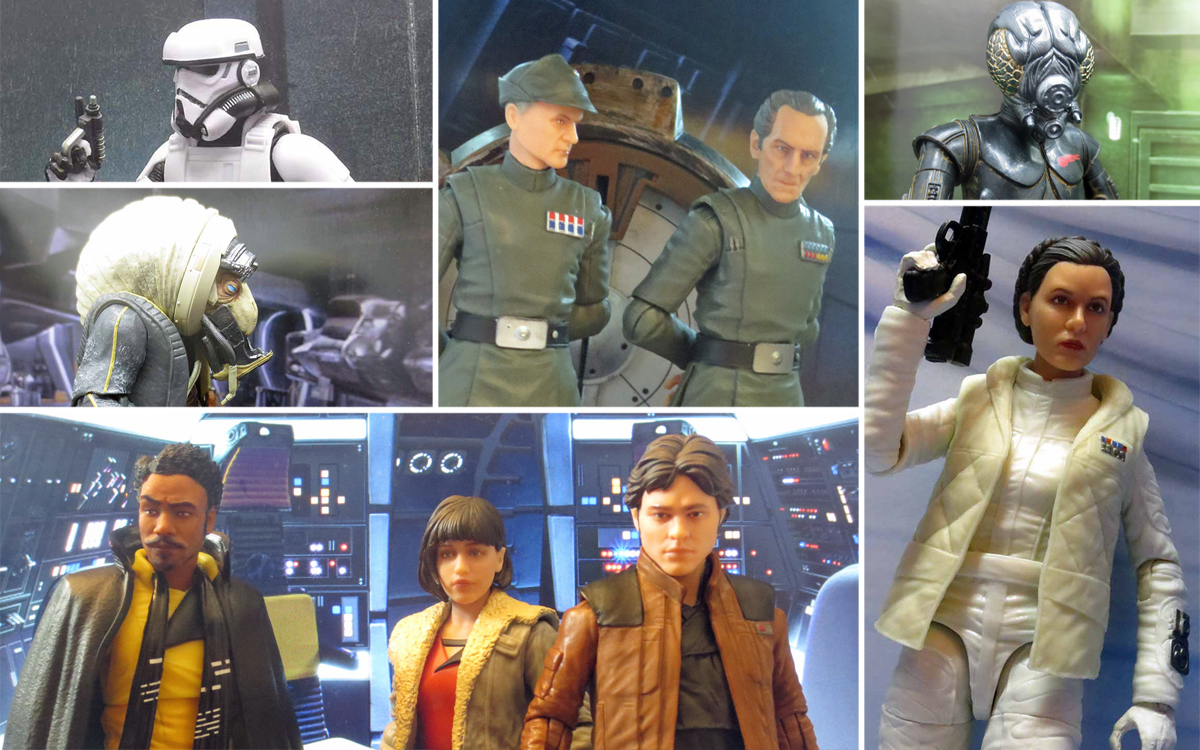 We’re a number of years in to Star Wars: The Black Series, and last year saw the introduction of real scan paint apps to compete with higher-priced import products… so how do you stay relevant? Hasbro’s team had precisely the right answer, splitting their focus between toys based on the latest movie in the ever-growing franchise, Solo: A Star Wars Story, and paying homage to the past, drawing from the Original Trilogy (Empire Strikes Back, in particular) to add many fan-requested characters to the 6″ line. From the Gamorrean Guard to General Veers to the completion of the Bounty Hunters sextet, there were a LOT of OT figures added to The Black Series this year, and most of them were so well designed as to fit perfectly as the ultimate toy versions of their on-screen counterparts. 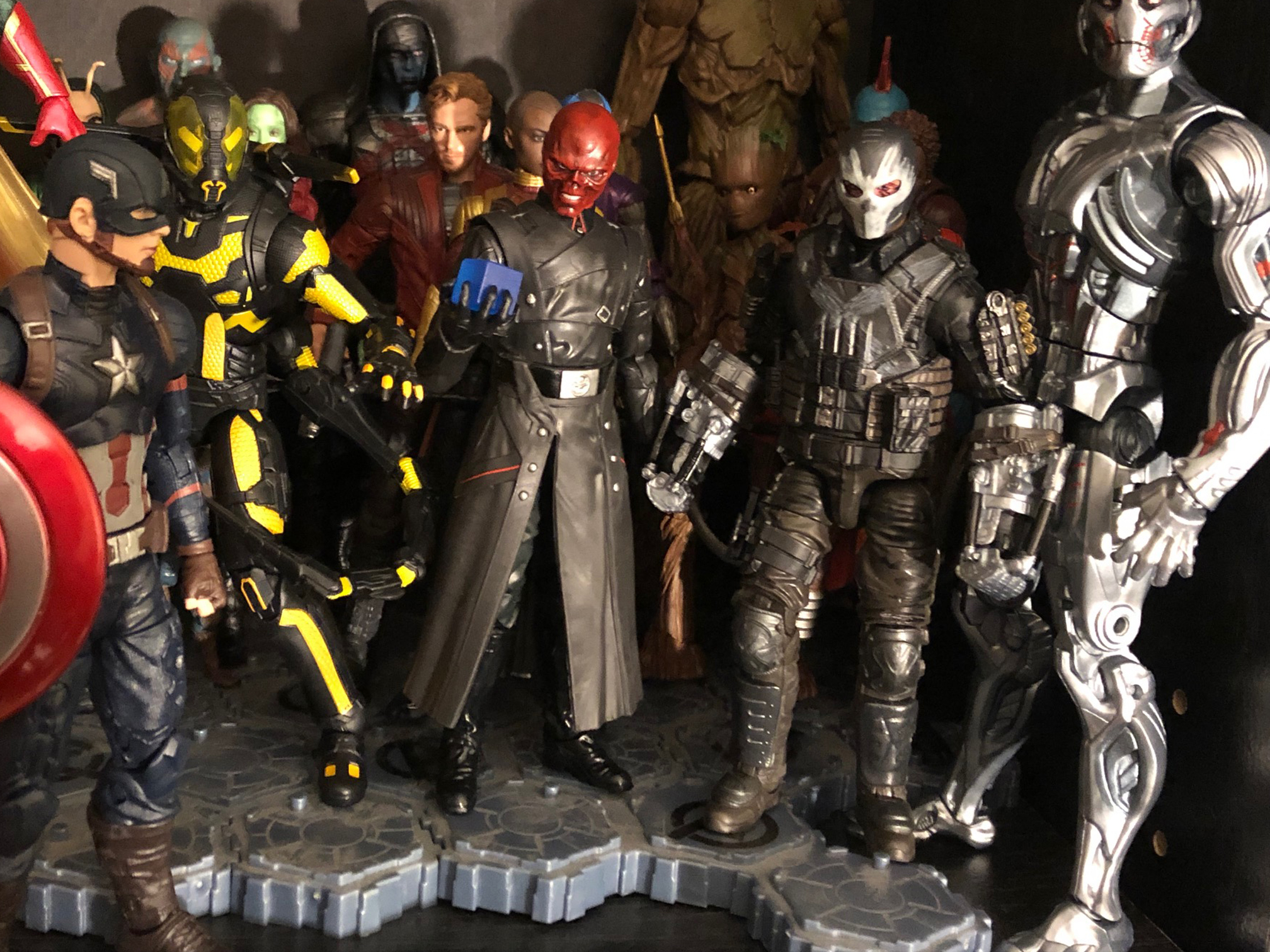 Okay,you may think of this as cheating, since it can be argued the entire Marvel Studios toy line could live within the previously-ranked Marvel Legends category. But I would argue this sub-set can more than stand on its own, as it is focused entirely on cinematic sculpts in an effort to round out the movie collection in toy form… especially when it comes to the oft-ignored villains of previous year’s collections. Marvel Studios: The First 10 Years brought us the first 6″ action figures based on the big-screen versions of Red Skull, his Hydra army, Yellowjacket, Ronan, and Sif, while also delivering dramatic upgrades to previous versions of Captain America, Tony Stark, Iron-Man, Thor, Hulk, Thanos, Doctor Strange, and more… this microseries was the perfect way to include previously ignored characters to the toy line, while also updating what we’ve seen with the latest technology in sculpt, paint, and design. It’s hard to consider a toy line in which virtually no release could possibly be deemed a waste or reiteration of a previously-released product… but Marvel Studios: The First 10 Years did just that, while leaving us thirsty for more. 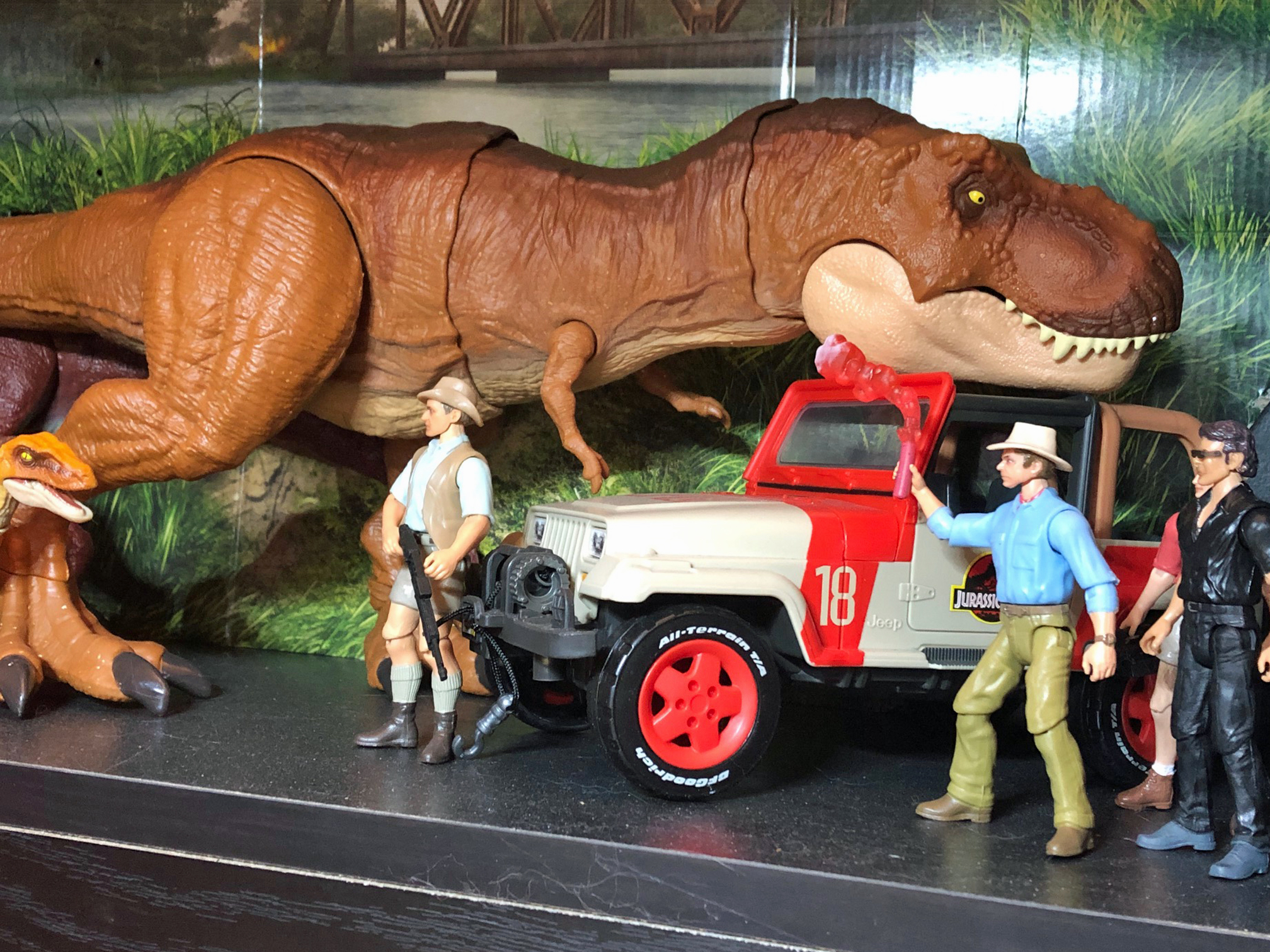 Every year sees the debut of many new toy lines. But there’s a difference between a toy line and a toy universe. In 2018– Mattel’s first year with the franchise– they have started to establish Jurassic World as the heir apparent to toy universes like Star Wars, and I could not be more excited. The diversity and ambition of their toy line, ranging from all shapes and sizes of dinosaurs (obviously), as well as human action figures, vehicles, playsets, and more left the Jurassic World line leaving a dinosaur-sized footprint in the action figure aisle. The toys have proven to be a hit with kids and collectors alike, thanks in no small part to the cool Legacy sub-line which focuses on the original Jurassic Park film… and, overall, they’re really good toys! The scale between dinosaurs and humans is realistic, the sculpts and articulation are strong (in particular on the humans, who feature real scan paint apps despite their small 3.75″ scale), and the action features are clever and enhance playability as opposed to inhibiting it. We saw a big, comprehensive Jurassic toy line in Mattel’s first year, one that had all the makings of the next all-time great plastic universe. I hope they keep this momentum going in 2019, and beyond.