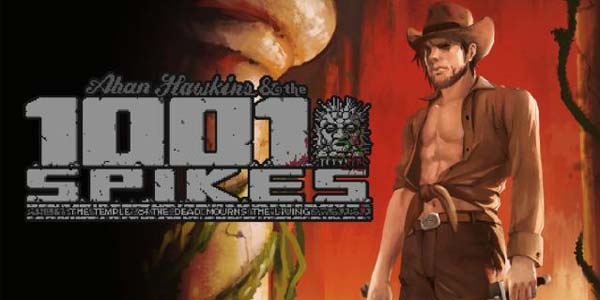 1001 Spikes is an arcade game that is part Indiana Jones, part Mega Man, part Dark Souls, and ALL pain to the heart. Patience, and strategy will help you achieve success, and if that doesn’t work, there’s the age old trick of crying into your pillow.

They call this game 1001 Spikes for a reason, folks. I went into this game expecting it to be challenging because I had been told that it was frustrating and essentially an 8-bit version of Dark Souls. Now, I have never played Dark Souls but from what I’ve heard, that game is what nightmares are made of. So imagine that in pixellation, and you might have a good sense of what 1001 Spikes entails. Jumping into the game, I expected there to be difficulty. I always approach games with a bitter sweet sense of pride and anxiety, because I like to pretend I am the best gamer in the world, but at the same time I doubt my ability as a player. The first level is completely misleading, I honestly thought that the difficulty had been hyped up, or maybe I’m just super amazing, who knows?

However, the game quickly turned into exactly what I fear out of video games. First off, the game requires patience. The graphics and layout style reminded me a bit of Super Mario Bros or Mega Man, but in those games I found joy ramping up and then speed running the level, flying over mushrooms, and smoothly kerplunking on top of turtles. You cannot do this in this game. Correction– you can do whatever you want really, but it won’t successfully get you from one level to another.  The contraptions in each level are literally creations of the Devil himself. Oh, did I mention there are no checkpoints for quite awhile, if at all? NO WAIT, that’s a lie– there’s one in the very beginning that they use AS A JOKE. They literally make fun of check points.

The game follows the main character who has a dysfunctional relationship with his father, and it would be an understatement to say the two don’t get along. Essentially his father challenges him to find this location with the treasure, and maybe just maybe then will he accept him. Obviously he accepts this challenge, because daddy issues and video games at times go hand in hand. I do not think I’ve encountered video games that didn’t have some sort of cheesy dialogue to go along with them, so ignore that and the story isn’t too bad. I think the story tries to add a serious, yet humorous, element to the story because like I’ve stated in other articles, I think pixellation is only successful as fun and playful, and takes away from seriousness. I suppose the main reason why I was able to avoid breaking my controller in frustration was because of the cute element of the graphics. Pixellation is adorable to me, and no amount of blood, or bullet shooting rock faces, are going to change that. 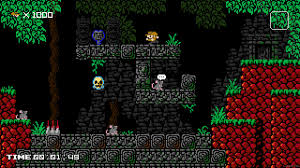 Here’s a few things you need in order to be successful at this game, a few things which I lack. Patience! Yes, you need patience because this game isn’t just something to speed through, it actually takes thought and tact. Okay, so if you don’t have patience, you better have reflexes. I like to think I possess those two qualities… but I do not. I tried to get through the levels too quickly. The problem with this tactic is that the levels are embedded with death traps everywhere. They tell you at the beginning of the game to always be aware of your surroundings, and I suppose I ignored this notion because I found myself dying unexpectedly.

At the beginning of the game I honestly wondered why I would possibly need 1001 lives. It did scare me a bit, I assumed that if they were giving you these many lives there had to be a reason… THERE IS!  Maybe it is because the game is genuinely hard, or maybe I am just bad at these sorts of games (obviously it’s the former option), but I went through an abundance of lives on some levels. Do not get the wrong idea– this game is fun, requires thought and strategy, and because of the pixellation adds a bit of lightheartedness and old-school nostalgia to the style. However, it is fun for people who enjoy these things in a game all at once.

I am an incredibly impatient person, and find myself getting overly anxious to power through a level while screaming at the top of my lungs, rather than sit and observe the level for a few minutes. The important and riveting element of the Hitman games is that you get to imagine creative ways to kill the enemy, but I still love to blaze through rooms with wild abandon, spraying bullets in as many possible directions until I am the only one making any sounds. Those games are absolutely wonderful.. If your cup of tea is that sort of thing. I actually do recommend this game to people who genuinely love challenging themselves, who enjoy patiently plotting ways to make it through the level, and possess the patience for this skill.