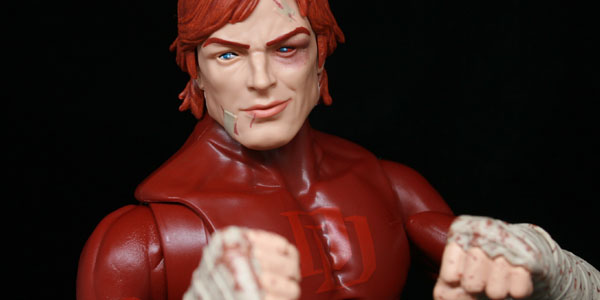 It’s all about the accessories when it comes to Hasbro’s 12″ Marvel Legends Daredevil.

For over a year now, the Marvel Legends toy line has featured a larger, 12″ scale offshoot, a sub-line Hasbro has been filling with some highly detailed, super poseable sculpts based on the heaviest hitters of the Marvel Universe. It’s sort of a second coming of the classic Toy Biz line Marvel Icons, and true to those roots, Hasbro has employed a certain level of artistic liberty in terms of character design and costuming.

That aesthetic is very much on display with Daredevil, the 12″ San Diego Comic Con exclusive, but the end result is predominantly a win. Clad in a riff on his classic red jumpsuit, this all new sculpt taps into a real world style with the figure’s helmet/ mask and armored gloves, and additional tones and glossy finishes help distinguish these parts from Daredevil’s more basic bodysuit.

I really like the armored bits, which help to ground the design of this street level hero. I feel his lean body type was intended to do the same, but the sculpt seems a bit too skinny to properly represent Matt Murdock in my eyes. This body would work great for Spider-Man, but Matt needs a little more bulk… and lacking that, his gloves and boots seem too large, giving him an almost teenage silhouette. 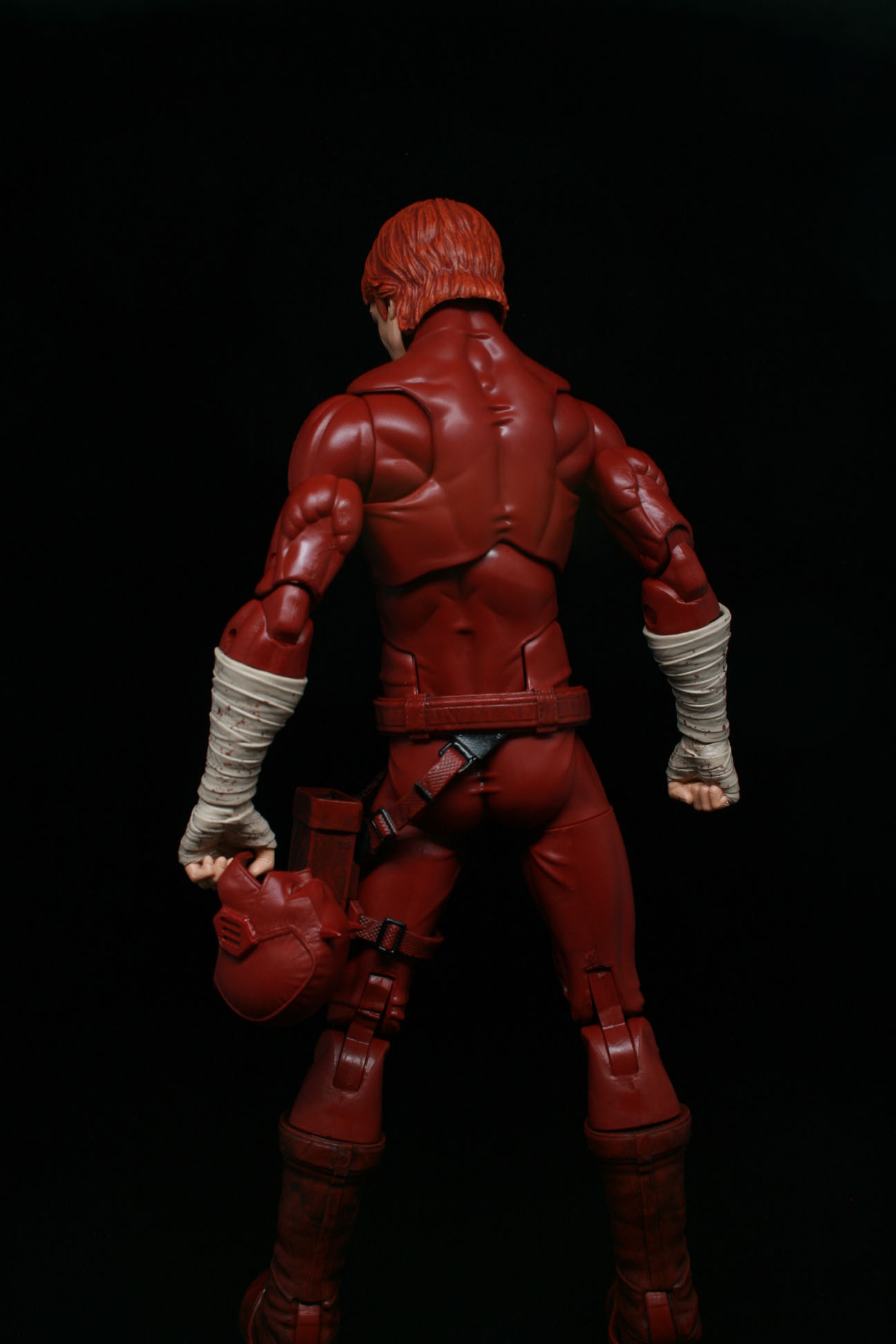 While the figure isn’t perfect, Hasbro really pulled out all the stops when it comes to Daredevil’s accessories. He includes a total of four alternate pairs of hands– gripping hands and closed fists with gloves on, and another two sets of bloodied, bandaged hands– and even two alternate forearm pieces. This allows you two change Matt’s forearms from gloves and gauntlets to bandages, which matches the all new Joe Quesada artwork on the figure’s elaborate window box.

The hands and forearms swap out easily, and they have a unique sort of attachment I’ve never really seen before… the forearms are hollowed out, and the wrist pegs sync up with sockets stemming from the elbow down. Why he features this setup instead of simple pegs at the top of the forearm and at the wrist I do not know, but all the parts can interchange easily and hold in place securely, so I’m not complaining.

We also get an alternate unmasked Matt Murdock head, featuring a character appropriate cocky smirk despite the bruises and punishment our hero has clearly recently experienced. The head is packed with personality, and it’s nice to see Matt get his own unique portrait instead of a repainted Hawkeye head or other shortcuts we’ve seen in the past. To match the unmasked look, Daredevil includes an empty mask, which he can hold in his hand.

Naturally, Daredevil comes packed his twin billy clubs, which he can hold or store in his leg holster. The weapons are nice, made of a firmer plastic than many smaller clubs, meaning they’re less likely to bend or warp. However I’m a little disappointed there’s no string to connect them, nor any way to snap them together to form Matt’s cane. Little details like that would have been easy to include (especially considering how common they’ve been on figures half this size), making them the weakest link among Matt’s accessory pool.

I mentioned the packaging earlier, but it’s worth revisiting, because it really is gorgeous. The Quesada artwork is showcased against an eye catching metallic red backdrop, and finished off with a back-of-box description written in braille. The whole thing is so well thought out, and feels so perfect for the hero of Hell’s Kitchen, it’s honestly a challenge to even take the figure out of the box.

Marvel Legends’ 12″ Daredevil was available exclusively at Comic Con, but you can pick him up while supplies last at HasbroToyShop.com.

Thanks to Hasbro for giving us the chance to shine the spotlight on this awesome addition to the Marvel Legends collection! 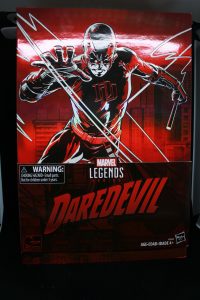 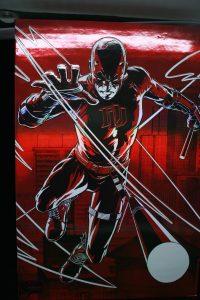 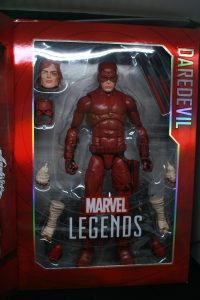 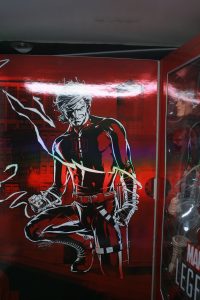 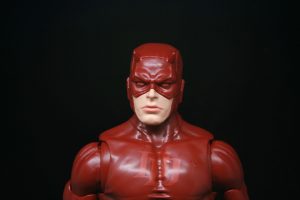 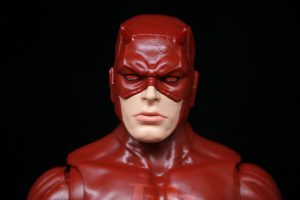 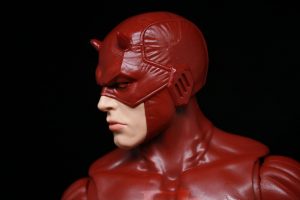 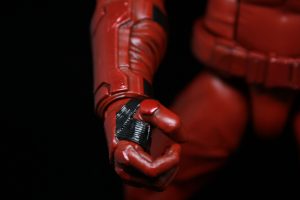 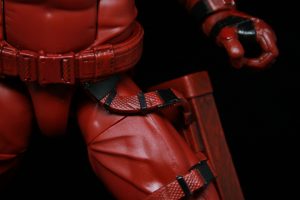 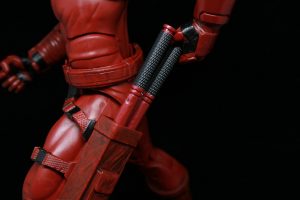 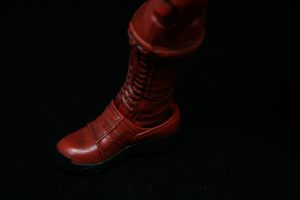 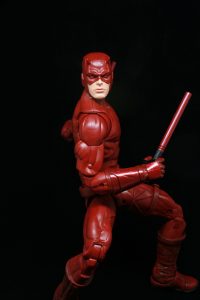 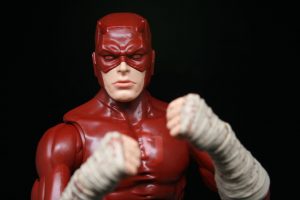 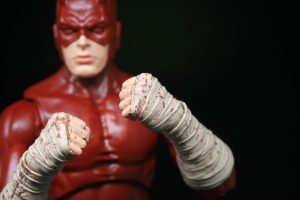 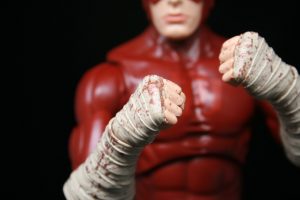 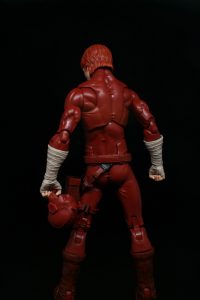 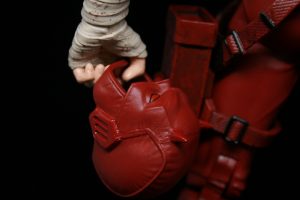 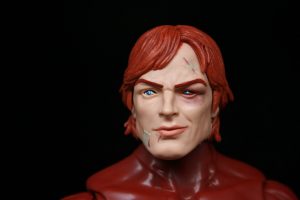 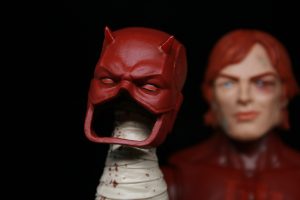 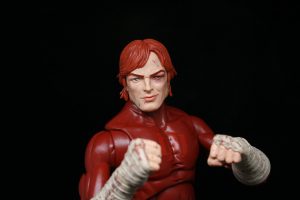 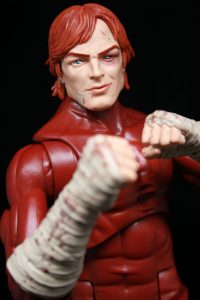 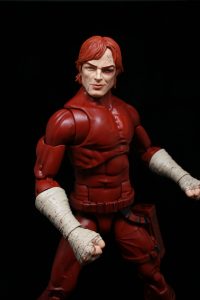