21 Jump Street is a Worthy Addition to the Reboot Craze 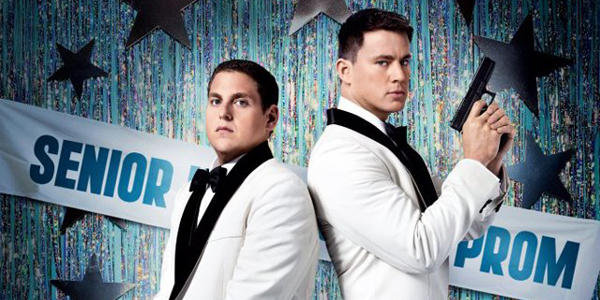 21 Jump Street is the latest in a long line of classic TV shows being re-imagined for the big screen, and the new take on the “old school” undercover cop story sends up the original show– and the buddy cop genre– with just the right mix of raunch, meta jokes, action and comedy, and the result may be the funniest and most entertaining retro reboot since Land of the Lost.

The movie take on Jump Street wisely takes the “new generation” approach, featuring new characters instead of recasting Hanson and Penhall from the original show– here, Hill plays Schmidt whose new partner is Channing Tatum’s Jenko. After quickly establishing the duo’s past in high school together (Schmidt as the awkward, Eminem lookalike loser and Jenko as the popular jock) we see them reunite at the police academy and become fast friends outside of High School. Schmidt, while lacking in the physical department, has more than ample intelligence for the cop job, while Jenko can chase down a perp, but can’t even commit the Miranda Rights to memory. The two aspiring officers work together to cover each other’s shortcomings, and become partners in the field… as bike cops.

After they botch their first bust completely, their Captain re-assigns them to an old program from the 80’s that’s being re-established, and the two are on their way to 21 Jump Street to begin their return to High School. Schmidt and Jenko get their new assignment from perpetually irate Captain Dickson (Ice Cube)… they have to go undercover as High School students to track the source and supplier of a new synthetic drug hitting the streets. With their new covers in place, both cops feel very differently about their second time in school, with Schmidt sweating a return to ostracized loser-dom while Jenko looks forward to re-living his glory days. However once they get to the school, both of them realize their perceptions don’t really match modern kids– the jockish Jenko is now made fun of for his lack of caring about school by the new “cool kids,” a crew of over-achieving, socially-conscious hipsters who also happen to be the peddlers of the new drug! While Jenko is relegated to a dorky group of science nerds, the formerly-uncool Schmidt is indoctrinated into the inner circle of the hipsters, delving deeper into their drug ring while enjoying the chance to be popular for the first time in his life. From there things continue to escalate, as the cops get in deeper and deeper, getting more caught up in High School drama than police work, which builds to a major standoff at the Senior Prom.

I’m glossing over a lot of the plot here, as truth be told it’s the least important part of the movie– each story point you’d expect is here, from the growing social divide between our heroes, to the “you’re off the case” moment, to the final showdown that ties everything up. What makes this forgivable is that the clever script, co-written by Hill, plants its tongue firmly in cheek and turns the generic plotline into a spoof of the buddy cop/ action movie genre. And while the spoof angle provides plenty of laughs (I loved a running gag about how in real life, cars don’t explode nearly as often as in movies), it’s still really just a framework to showcase the dynamic between our leads. I’ve been a Hill fan for quite some time, and while he’s not really breaking any new ground here (playing a very familiar riff on his typical anxiety-ridden nebbish), he handles Schmidt’s transition to popularity with just the right amount of geek wish-fulfillment. He also has an outstanding chemistry with Tatum, who really shines in this movie. I’ve never been a fan of Tatum but here, playing essentially a hyper-exaggerated version of his own jockish “dudebro” persona, he proves himself very funny. His early tantrums about no longer being cool in High School are great, as is his growing friendship with his Chemistry dweeb classmates. The dynamic between the two cops feels real, which in and of itself is a feat as I could never really imagine Hill and Tatum hanging out together before this movie, and while the film does have a few too many in-your-face scenes explaining these guys’ relationship, there is no getting around how well they can play off one another for both comedy and action beats.

The best part about the movie is its look at modern day, post-ironic High School culture. Watching the movie from roughly the same age perspective as Hill and Tatum, it is weird to consider how much High School culture has changed, and while the movie hypes up the power and influence of post-Glee hipsterdom, it’s an interesting concept that the tropes burnt into our collective brains– that disinterested jocks are always popular and nerds are always losers– may no longer exist in real life. It’s played for lots of laughs here, especially through the personification of this new, hipster cool with chief drug dealer Eric, played with boatloads of smarm by Dave Franco. Eric’s crew are every bit as cliquish and cruel as the gangs of jocks we’ve seen for decades, and I love that the twee yearbook captain is able to put lots of menace behind himself even with muscles. In a more thankless role is Brie Larson as his sometimes-girlfriend (and Hill’s awkwardly underage love interest) Molly. Larson is really playing the straight man here, involved with the drug dealers but not dealing herself, and while she is adorable enough that it makes sense Schmidt for fall for her, there’s definitely a level of sleaze to the adult cop digging on a High School girl that’s never really addressed outright. This shady romance begs for a darkly comedic focus, but it’s ignored outright, most likely so as not to hold up the plot… but in a movie where the plot is nothing but a vehicle to set up more great character comedy, it seems like a missed opportunity.

Not a missed opportunity is the much talked-about cameos by original stars Johnny Depp and Peter DeLuise. I’d hate to spoil any of the surprise, but when these two show up during the very over-the-top final showdown at the Prom, it’s a truly hilarious– and surprisingly dark– throwback to the original series. At the start of this review, I compared 21 Jump Street to Land of the Lost, another cult TV show that was re-imagined for the big screen in a way that was both fresh and off-center, while still having an inexplicable vibe that connected it to its predecessor. That’s really the case here as well… by dialing back the drama and replacing it with a clever and funny script that skewers action movie stereotypes, great chemistry between our unlikely leads, and a satirical look at the modern world of High School, the new 21 Jump Street  may not be a great movie but it’s a great way to spend a few hours at the theater.