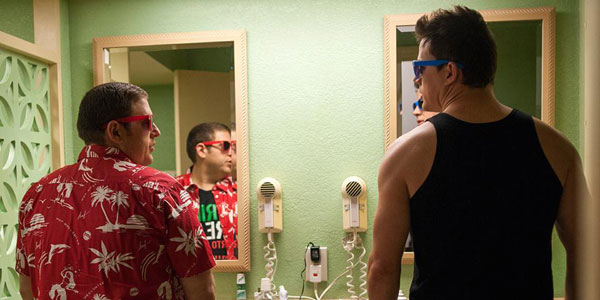 The new Jump Street does the impossible, delivering a comedy sequel even better than the first.

It’s common knowledge now that 2012’s 21 Jump Street was a way better movie than it had any right to be.  Even the movie itself acknowledged that fact in a series if very funny meta jokes poking fun at the movie’s own existence.  But going in to 22 Jump Street, I realized now we’re on the other side of expectations– the first movie was a total surprise hit, but now that we know what Chris Miller and Phil Lord are truly capable of, could they really capture that same magic again?

The short answer is yes, they did.  Not only is 22 Jump Street a worthy successor to the first film, it’s also one of the most ferociously funny, perpetually hilarious and well-made movies I’ve seen this year.  There’s more jokes, more action and more big, comedic set pieces… but our second outing with undercover cops Schmidt (Jonah Hill) and Jenko (Channing Tatum) really works because it focuses so well on their relationship.

After cracking the case in the last movie (recapped perfectly and hilariously in a “Previously on 21 Jump Street” opening montage), the duo has a new assignment infiltrating the dealer chain of a new drug called “WhyPhy” by going undercover in college.  This set up lets Lord and Miller hit a few college comedy tropes, for sure, but more importantly it also sets up the arc for our friends.

Since becoming inseparable in the last film, Schmidt and Jenko’s new assignment has them drifting apart as Jenko gravitates toward lunk-headed jock Zook, a bro with whom our jockish hero connects instantly.  There’s a great chemistry between these two good natured meatheads, and it makes their burgeoning relationship feel like a legitimate threat to the increasingly insecure Schmidt.

The heart of the story (and I do mean heart, because like the first one, this movie actually has a really sweet sincerity to it) follows our two partners drifting apart and eventually finding their way back to one another.  While much of the dialogue between them feels lifted straight from a romantic comedy, 22 Jump Street never stoops to the level of easy, cheap homophobic gay jokes.  Yes, it’s sort of a love story, and yes, Schmidt and Jenko do realize they love each other, but it’s a platonic love, and while that’s harder to illustrate than a litany of gay fear gags, this movie pulls it off perfectly.

But the movie’s true secret weapon is that same sense of meta comedy which made the first one so cool about its self deprication.  Jenko and Schmidt’s new assignment feels like a carbon copy of their last time out, and they are being ordered constantly by Nick Offerman’s Deputy Chief Hardy to make this case “exactly like the last time.”  That kind of fourth wall jabbing at what we all hate about sequels keeps up, as the success of our guys’ first case has afforded a much bigger budget for the department, including their new high tech headquarters across the street at 22 Jump Street, and a pair of unseen $800 shoes for Ice Cube’s Captain Dickson.

The meta gags are consistent throughout, from Jenko’s wish to go undercover as Secret Service at the White House, to the school mascot of one of our first red herrings in the case.  It never goes overboard, but provides a whole new outlet for laughs and reinforces the silliness of the movie– while it’s extremely well shot and written, 22 Jump Street is very much a film that never takes itself too seriously.

Phil Lord and Chris Miller totally nailed it yet again with their latest movie.  Not only is this a very, very funny movie, it’s one whose comedy comes from places both personal and situational.  There’s no throw away jokes here, as everything from the gags to the action set pieces all work in service of our story of two best buds who need to remember what makes their friendship so important.

The movie closes with what might be the funniest end credits of all time, an onslaught of related gags that I don’t really want to spoil here.  But what I will say is, if any of these jokes really ARE paving the way for the future of the Jump Street franchise, I’ll be there front and center on opening night.