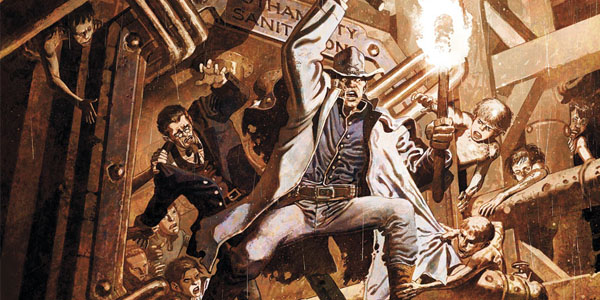 It’s another solid week in the realm of new comics.  Some stories are coming to an end while others are just getting started with all new characters, time periods, and some serious plot twists.  It’s a great time to be a comic fan!

If the cover art on this week’s issue of Aquaman wasn’t enough to make your mouth water and your hand immediately snatch it off the shelf, you’ve missed out on one of the best books yet to come out of the New 52.  Contained in its pages is the conclusion to the story regarding the Trench, the strange and cannibalistic monsters from the deep that have been snatching humans and dragging them into the murky abyss.  We get to see the reason for all of that, along with the King and Queen of the Trenches and their home.  Sure, there’s action abound in this issue, but I was surprised by the amount of character development for the titular hero that we’re also treated to.  We learn more of Arthur’s sympathetic nature through his conversation with Mera, and it’s easy to see how much he values all life, even that of his enemies.  Even though the Trench are just misunderstood, he still must kill off their species to save another, and he does so with regret.  It’s amazing that universal and meaningful messages can be found in so many different and unexpected places; even in the pages of a comic based on an intrinsically silly character like Aquaman.  Writer Geoff Johns is taking the character in a much darker and more serious direction than I would have expected, and I continue to be pleasantly surprised every month.  The series continues next month with a brand new story about who (or what) sank the almighty city of Atlantis so if you haven’t checked Aquaman out yet, next issue would be a perfect time to jump aboard.

All-Star Western has surprised many with its large mainstream following and critical acclaim.  After reading through this week’s issue, I can’t say that I’m too surprised; it contains all the ingredients of a great comic, from the skillfully controlled narrative and character development to the dark and gritty artwork.  After some tough love between our two heroes Jonah Hex and Amadeus Arkham last issue, they’re back together and on the trail of a much-maligned kidnapper.  They find the missing children easily enough, but their struggle to escape with the children intact looks like it’ll be far from easy.  The dynamic between the two lead characters is as entertaining as ever to read, with Hex being the typical shoot-first-ask-questions-later kind of cowboy, and Amadeus the scholarly voice of reason (which is ironic, considering that he goes on to be an inmate at his own insane asylum later in life).

The book also features a six-page miniseries titled The Barbary Ghost, crafted by the same creative team behind All Star.  The story so far seems to be typical mobster movie fare, but that didn’t make it any less entertaining to read.  It’s hard to complain when you’re getting two great comics for the price of one.

If you follow writer Scott Snyder on Twitter, then you already know that this week’s issue of American Vampire introduces us to a new era (the 50s), a host of new characters, and a brand new storyline.  I’ve been catching up on the previous entries in the series slowly but surely, and as awesome as Skinner Sweet and Pearl are, it’s exciting to see some new blood (pun intended) enter the series.  The issue starts off just like any great 50s movie and we’re introduced to the new character Travis Kidd, complete with greased back hair, leather jacket and the magical never-shrinking cigarette that would make James Dean proud.  After he goes to his girlfriend’s parents’ house, a pretty shocking turn of events occurs that I totally should have seen coming but didn’t.  Therein lies my favorite thing about Snyder’s writing; at every twist and turn I find myself amazed that I didn’t see it coming from miles away.  It’s because everything just flows so well, even when it’s coming way out of left field and you’re so focused on the story panel-by-panel that you don’t think about what might be coming; you just enjoy where you are at that moment.  Credit is also due for artist and co-creator Rafael Albuquerque, who deftly walks the fine line between grotesque horror and complete absurdity.  The issue ends with a hell of a cliffhanger (literally) and I couldn’t possibly be any more excited for the next issue.  If you haven’t picked up on this series yet, I urge you to start with this issue.  If I know anything about Snyder’s writing abilities, it can only get better from an already solid start.

The newest issue of Flash has to hold the record for most editors’ notes in one comic book.  Because we learn so much in this one issue, there are constant references back to previous issues to make it possible for a newcomer to understand everything that’s happening.  We learn how Mob Rule came about, why Dr. Elias was captured last issue, and, most importantly, we see what became of Barry after last month’s surprise ending.  It’s an incredibly eventful book with tons of answered questions and some of the most creative page layouts I’ve ever seen, courtesy of Francis Manapul.  One of my favorites has the panel actually rotating on its axis and the characters falling out of it into the white space on the page.  It took me a minute to get what I was actually seeing because it is so unconventional and cool, just like the book itself.  A highly recommended read.