A Bold New Direction for the Ninja Gaiden Franchise 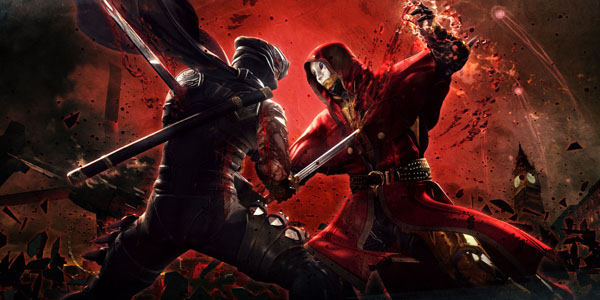 Although Tecmo has been publishing Ninja Gaiden titles dating back to 1989, the series really hit its stride in 2004 when Team Ninja and director Tomonobu Itagaki (of Dead or Alive fame) developed a reboot in 2004. After spending five years in development, the new Ninja Gaiden quickly appealed to hardcore gamers with its exciting adventure storyline, deep combat system, streamlined visuals, and challenging gameplay. Now, with a new creative team behind the helm, Ninja Gaiden 3 has been released to mixed fan reactions – but are their concerns justified?

Ryu Hayabusa returns as the series’ super-ninja protagonist to paint the town red – literally. Like its modern predecessors, Ninja Gaiden 3 is an unbelievably violent affair. The way this violence is presented, however, is actually a bit different and slightly more disturbing. Under the direction of Yosuke Hayashi, a conscious effort was made to make the game show more human emotion and showcase more realistic swordplay. Early on, a scripted scene plays out where a horrified lone soldier inches away from you after having just witnessed you slaughtering all his comrades, pleading with you to spare his life as he has children to provide for. Oddly, you don’t have the choice to let him go as the game won’t progress until you run him through with your blade. It’s interesting though, as many instances like this are present in the first act of the game with a focus to seemingly make the player (but not the character they’re controlling) feel terrible about killing scores of people. 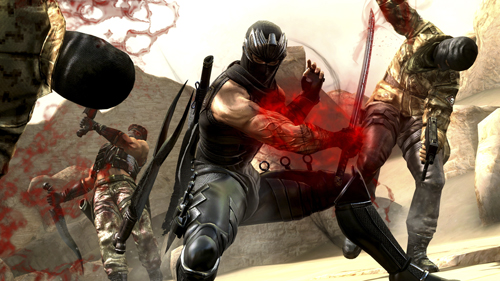 Also gone are the dismemberments and flying limbs from the previous title, replaced instead with swordplay more based in reality.  Instead of lopping off arms and legs with ease, players will typically be prompted to finish off foes by quickly tapping a specific button which will show a brief animation of Ryu plunging his sword deep into an enemy – putting all his weight behind it to push past muscle and bone. It’s an effective mechanic and doesn’t slow down the frantic action whatsoever.  Quite the contrary, this title is runs like you’re watching the prior entries in fast-forward.

That actually leads to the first thing that will immediately strike any long-standing fan of the series upon starting up a new game in Ninja Gaiden 3 – the standard difficulty level has been dialed way back with a much greater emphasis put on breakneck action. While the previous two titles rewarded more skilled players’ understanding of complex fighting mechanics, this title favors a more hack-n-slash, arcade-style approach. By simply mashing on your attack buttons, Hayabusa will continually swing his Dragon Sword with reckless abandon, auto-targeting nearby enemies and tearing them down with ease. There is a block button but I can’t think of one instance where I actually felt the need to use it. The developers dropped the “reverse wind technique” from the prior game in favor of a new slide move to dodge projectiles and stylishly get Ryu under low-hanging obstacles. It works well but can again make the game surprisingly simple as sliding around makes Ryu nearly impervious to damage. 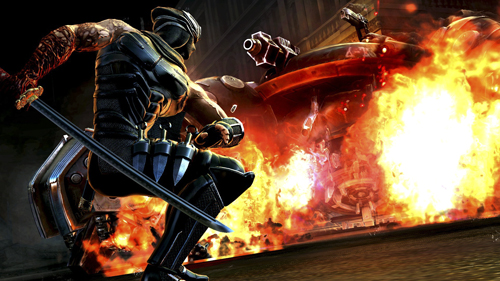 Each new area you explore is likely to be filled with a few dozen baddies that will need to be dispatched in order to proceed to the next location, were the system repeats itself. This may sound like a repetitive mechanic, and it is, but the gameplay is engaging enough to keep the player interested throughout. What’s disappointing though, is the lack of customization and offensive tactics in Ninja Gaiden 3. All the awesome weapons and magical powers that really made the last game shine have been done away with, leaving Ryu access only to his signature sword and one Ninpo, which transforms Hayabusa into a dragon to wipe out any on-screen enemies and fill his life gauge. It keeps the action going without menu breaks to outfit your character with the best equipment for a given situation, but sacrifices some of the fun that’s inherent in strategizing a combat approach. Ryu’s hi-tech bow makes a return and controls better than ever with an auto-targeting feature that can lock onto enemies easily and the infinite ammo makes it a joy to use. The “Ultimate Technique” is also still present, but is now simply available to use after you’ve dispatched a certain number of foes in an area.  Once that happens, Ryu’s arm will glow red, alerting players that a button can be held down to charge and unleash this power, which will send him zipping across all corners of the area and striking every foe within reach. 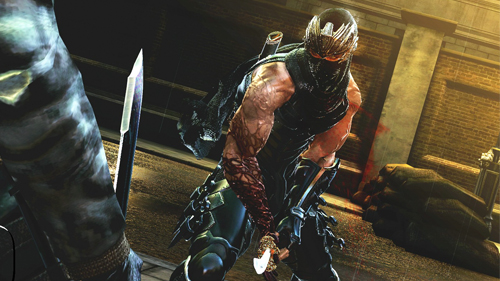 The new engine keeps up with the action tremendously well – far better in fact than the previous title, which slowed down to a crawl when too many character models were present on-screen.  I remember several instances in the last act of Ninja Gaiden 2 where the framerate took such a hit that it looked like someone flipping through a slideshow.  Not so here. No matter how many explosions were going off, bullets flying around, or enemies they packed into an area, the game performed admirably – seeming to run at nearly constant 60fps. Furthermore, the visuals and environments looked great.  The enemy designs aren’t incredibly varied but all animate well and Hayabusa himself, whether furiously attacking or simply performing chiburi after a battle, is rendered with elegance and fluidity.

It’s tough to say if the changes are a triumph or not – certainly the sales figures will be the ultimate deciding factor.  Many fans who have followed the series for the last eight years feel that the title has become far too streamlined and simplified in an effort to cater to casual gamers.  Having played it through, there is no doubt that newcomers will be able to access the game far more easily than prior titles, where even the most basic enemies could destroy you if you let you’re guard down for a second. Even so, the game is still a whole lot of fun and, in the end, that’s what gaming is about. No, you won’t have the thrill of fighting for your life while being on the verge of death for the entirety of the game, but you’ll get a solid 10-hour action/adventure experience that you can walk away feeling content with. 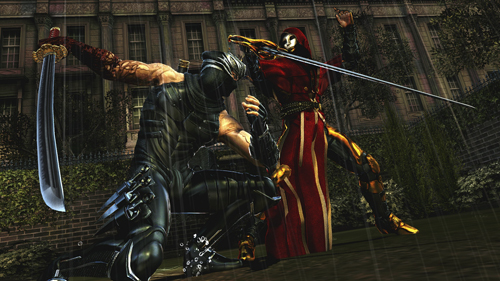