A Pair Of DC Movie Updates 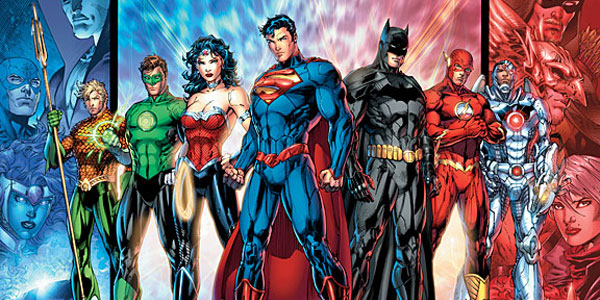 Two new bits of info have been revealed/ leaked about some of DC Comics’ upcoming big screen adaptations–a toy commercial may have revealed Superman’s new foe, while Justice League gets a release date.

I’ve been trying to get through my interviews and coverage from New York Comic Con, but there’s been two events that I feel are noteworthy on the DC movies front, in case you haven’t heard yet.

First, Mattel apparently slipped up and released a toy commercial that may have given us our first glimpse at General Zod, as the villain appears in Zack Snyder’s new Man Of Steel.  Previously there have been rumors that Michael Shannon’s villain would sport a fully CGI costume (not unlike what they did to Green Lantern), but this new video shows what might be a toy version of his bald-headed, on screen appearance:

I think the most exciting thing to come out of this commercial is Zod’s robot army, which– if they are actually a thing in the movie and not just a sideline toy– would be pretty exciting to see Superman fight.

A few days after this commercial leaked, Warner Bros. officially announced they are going forward with Justice League, which will hit theaters in 2015.  There’s very little in the way of details right now, but the LA Times is reporting Superman, Batman and Wonder Woman will all be featured.  I think the more interesting question is, which Superman will make the team?  Will it be Man Of Steel’s Henry Cavill, or will Warner continue their boneheaded path of not sharing a cinematic universe between their on-screen heroes (something that, depending on who you talk to was a mandate from either Warner execs, or Chris Nolan).

I’m pretty confident Justice League will be as tied to Man of Steel as possible, as Warner and DC will likely try to ape the incredible job Marvel Studios did in their cinematic sandbox, creating a clearly defined, shared universe in which their various characters can coexist and interact as needed.  It worked for Marvel, but part of that was building it slow– they started with Iron-Man, then practically a B-Lister to the general public, and built up from that foundation.  With Justice League making its debut first, it looks like DC will be trying the reverse– setting up their team movie tentpole, then likely attempting to spin off various characters from there.

Who knows if this strategy will work, but it feels more corporate and less organic than what we saw at Marvel.  The other half of the Marvel equation was having a talented set of creators behind the scenes every step of the way, and recent rumors that Warner is courting Ben Affleck for Justice League suggest they’re at least going in the right direction, talent-wise.

I’m very intrigued by the idea that both Marvel and DC have the potential to become staples of the box office– if both studios can keep pace turning out quality films like, basically anything from Marvel so far, we could be looking at over half a dozen comic book movies a year!  We’ll keep following very closely as DC attempts to up their own cinematic presence.