A Tale Of Two Spideys 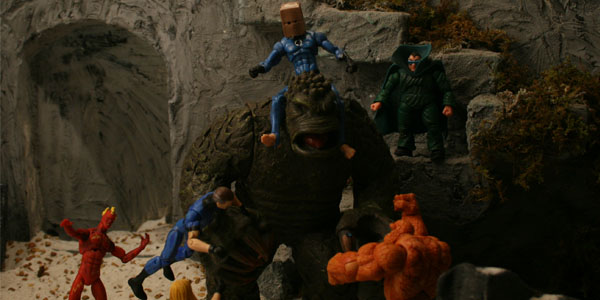 Hasbro’s Marvel Universe waves 18 and 19 are starting to trickle out to brick and mortar retail, and each wave contains a randomly packed variant figure. But these aren’t just any variants– they’re both new takes on Spider-Man, and I don’t know how Hasbro and Marvel do it, but they’ve delivered two more takes on the wall-crawler that feel pretty essential for a Marvel geek like me.

Wave 18 included the Ultimate Comic style Spidey, featuring Peter in his togs on a new, smaller body to make his teenage physique a little more believable. It was a cool figure, but even a Marvel devotee like me can only have so many Spideys in the same costume.  Luckily, the variant figure fares much better– rather than a Peter in new colors, Hasbro pulled an old trick from the Toy Biz stable, coyly bringing an all-new character in the form of Miles Morales.  Miles is, of course, the novelty hero created by Brian Michael Bendis to replace Peter as Spider-Man after he died. I’m pretty sure Ultimate Peter isn’t dead any more, but I can’t really care enough to look it up on Wikipedia, so for the sake of argument we’ll still call Miles the “new” Ultimate Spider-Man here.

Despite his dubious introduction, the concept of a new Spider-Man wasn’t terrible, and Miles got to sport a neat new black and red costume, which is captured well in plastic here. The figure’s smaller build (using Bucky as much of his base) makes him adequately short and scrawny, and Miles keeps all the standard articulation for a Marvel Universe figure.  The young hero is packed with a backpack made of webbing– made with Peter in mind, likely, thanks to the camera rolled up inside– but it’s a solid accessory in any regard.  The red lines of Miles’ costume are nice and clean, although it seems strange that the webbing pattern did not carry over onto his all-black back. It makes the figure feel incomplete, especially compared to the recent Legends version of Miles, which has a much more rounded paint job. 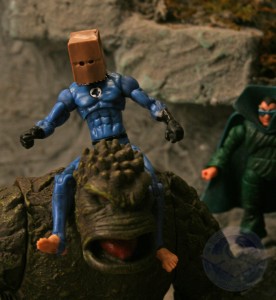 Wave 19 saw another pair of Spideys, including the 616 universe Peter in his Future Foundation outfit, and what might be the greatest variant of all time– the Amazing Bag-Man! See, back when Peter first rid himself of the black suit/ alien symbiote/ Venom, he was kind of stuck across town, naked.  His good buddy the Human Torch hooked Peter up with an old Fantastic Four costume and a paper bag with the eye holes but out, so Peter could make it home with (at least some of) his dignity intact. What are friends for??

Bag-Man has popped up a few times since, and remains one of the weirdest looks for the wall-crawler in the comics… and now in toy form as well!  Bag-Man is mostly accurate, from his F4 uniform and bare feet to a very nicely sculpted brown paper bag covering his head. The only thing Peter is missing is the “kick me” sign Johnny put on his back along with the costume, but that’s such a simple custom to pull off, I doubt there’s anyone who couldn’t add it.  It’s interesting that this variant also features the first unmasked Peter Parker headsculpt we’ve seen in the line… although it’s glued pretty securely underneath the bag. While Peter’s head sports an unpainted head of hair, his eyes are fully deco’ed, and if you can the bag at the right angle you can see his eyes peering out through the eye holes.  It’s a cool detail, I just really wish the factory had been a little less zealous in gluing the bag in place.

I keep thinking I’m at the point of capacity when it comes to variants of core characters in the Marvel Universe, but Hasbro’s continued use of clever, inventive and— quite frankly, awesome– new versions always reel me back in for one more go-around. I’d like to think Bag-Man is the top of the mountain, but I’m pretty sure the folks at Hasbro will cook up another new take on the wall-crawler I’ll be just as compelled to own.

There’s no real word on how these Spider-Man variants are being split up, but Toycade has Miles Morales and Bag-Man in stock now… if those are the Spideys you’re looking for (and they probably should be), Click Here and place your order now. 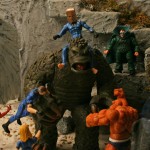 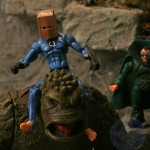 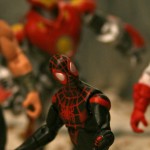 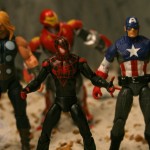