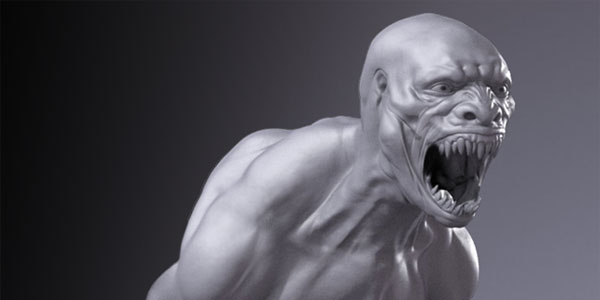 Jurassic Park IV seems to have gone extinct, but the recently-leaked concept art shows that thousands of children were likely spared a Summer’s worth of nightmares.

Jurassic Park IV has been in some stage of development for a decade now, but there was no stage in its evolution more batshit insane than the original concept, which would reboot the franchise using an all-new lead character… commanding a team of highly trained human/ dinosaur hybrid mercenaries(?)!  The reveal of this insane-o screenplay, and its subsequent (and probably justified) rejection by the internet as a whole, is wonderfully brought to light in this script review from Ain’t It Cool News, and ever since I read that piece back in 2007 I assumed JP4 would be high camp and schlocky, with cartoonish dinosaurs toting around their massive weapons like a reptilian Dirty Dozen. 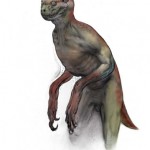 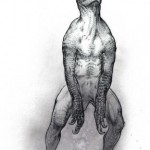 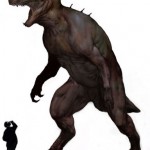 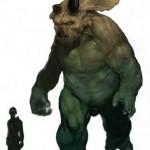 Instead, based on these concept drawings, the hybrid creatures were planned to look much, much creepier, and seeing these things in action– and presumably as the “heroes” of the movie– seems like it might be more unnerving than entertaining.  Apparently these concept drawings lead to an almost immediate suspension of the project by Universal, which makes sense as I can’t see too many of these creatures lending themselves to a kid-friendly toy line in their current state.

It looks like we’ll never see the original vision for Jurassic Park IV on the big screen, but these scrapped concept pieces by Carlos Huante give a pretty good insight into the odd direction this already-strange project was taking.  The sad thing is, any card-carrying geek worth their salt would likely jump at a goofy sci-fi flick featuring mutant mercenary dinosaurs in action– it sounds like a perfect marriage of 50’s sci-fi silliness and over-the-top 80’s action. But trying to tie this ridiculous premise into an established franchise like Jurassic Park is likely what really killed it.