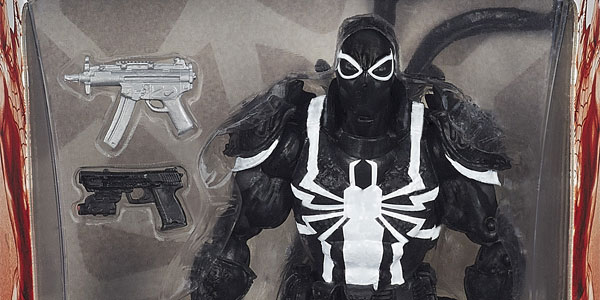 Flash Thompson, Agent Venom was one of many Marvel Legends figures revealed by Hasbro at Comic Con last summer, which have yet to see the light of day.  While there’s some fans already convinced seeing these figures released is a lost cause, it seems to me Hasbro is definitely still working on rolling as many of them out as possible.

Case in point, Agent Venom.  This figure was part of the abandoned “Jubilee Wave” of Legends (whose Jubilee Build-A-Figure, it’s worth noting, is now part of the Toys R Us/ Diamond exclusive X-Men Legends), but now he’s finally getting released as a Walgreens exclusive.  This is kind of surprising, considering I have never seen any Legends product at Walgreens, but the drug store’s buyer certainly tends to wear his interests on his sleeve– after all, this is the same store which has released several exclusive Walking Dead toys, as well as the upcoming Tyrion Lannister 2.0 from Funko, if the rumors are true.

But Agent Venom is most definitely coming, and he will be available for preorder at Comic Con next month before hitting Walgreens in the Fall.

I’m happy to see another cool figure find a home, although I’d be lying if I didn’t admit I’d be more excited if we knew the fate of the rest of the wave, including those killer Batroc, Tiger Shark, Radioactive Man and Blizzard toys.  The only thing I can imagine is all four of those guys– along with Hawkeye, Bulldozer and Songbird– would all be logical fits for next year’s inevitable Avengers Legends toy line, whereas Venom fits better in a year whose IPs include both Spider-Man AND Guardians of the Galaxy.

So I’ll hold out hope we see more of those not-yet-forgotten Marvel Legends from last year.  And my hope will continue as I prowl the aisles of the 24/7 Walgreens down the street from my house at odd hours, and try to explain why exactly a 34 year old man is searching high and low for a child’s plaything.*

Some things are better left unknown.  But the fate of the homeless Marvel Legends isn’t one of them.  So I’m glad Hasbro is making strides to get these cool figures into the fans’ hands, even if it’s only one or two at a time.

Check out the official press shots of Agent Venom, and stay tuned for more details on his availability coming soon! 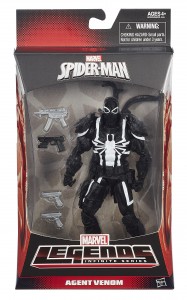 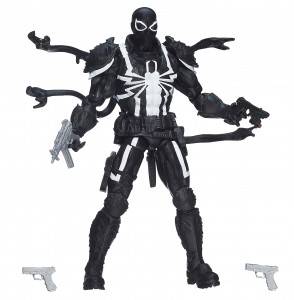 *Answer: Because Agent Venom is awesome.