Agent Venom is Ready for Assignment 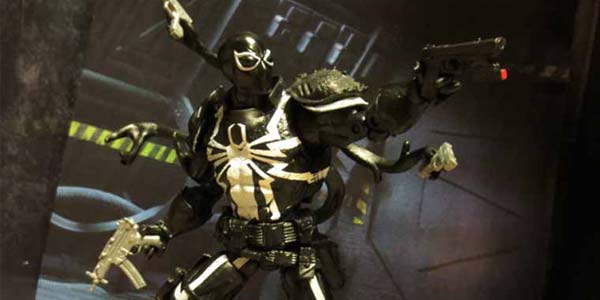 Agent Venom was originally intended to make his debut in late 2013, as part of an assortment revealed at last year’s Comic Con.  That wave never came to be, but Hasbro has been finding new outlets to release some of these figures– the Build-A-Figure Jubilee wound up part of the Toys R Us exclusive X-Men Legends, Radioactive Man will be part of a Target 3-pack this Fall, and Agent Venom became the first ever Walgreens exclusive Marvel Legend.

Yup, Walgreens, the drug store that has really stepped up its game in the action figure market this year.  I’m still not a big fan of the retailer exclusive concept, but the good news is, Agent Venom is shipping in solid cases, so there should be a lot of them out there as they roll out into more and more retail locations.

The other good news is, Agent Venom is a great figure, one of the best Legends to be released in a year where that title holds some considerable weight.  The considerable new tooling on this guy is impressive, and goes a long way to mask the reused Ultimate Captain America base body.  Between the new head, forearms, lower legs and chest overlay, Venom really does feel like an all new figure, much more than a kitbash.

Flash Thompson’s super hero alter ego is actually a really strong character design, and Hasbro’s figure gets it right.  The simple, sleek black and white color pattern and minimalist mask– featuring nothing more than outlines of two Spider-Man esque eyes– is a great balance to the spiky, weathered texture of the body armor and the militaristic belt and weaponry.  These disparate features come together to create a visually dynamic and fully rendered action figure, one who looks pretty damn cool any way you pose him. 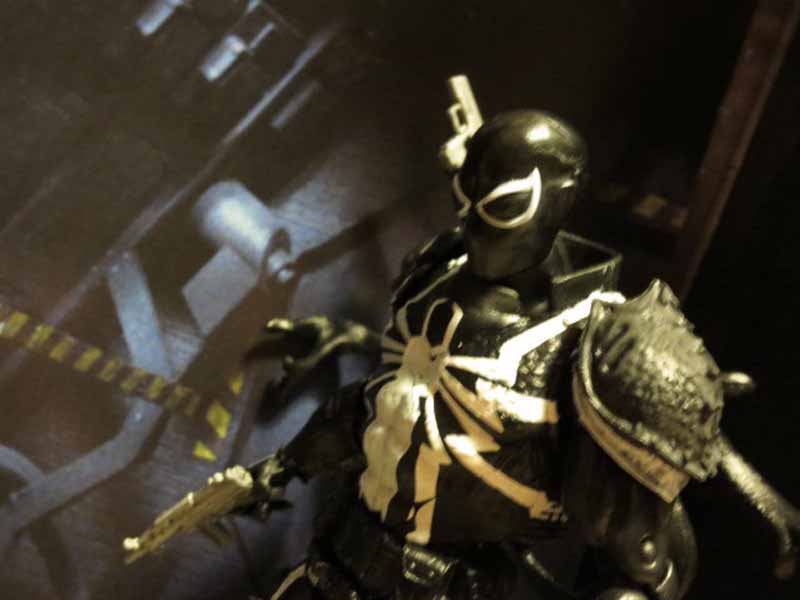 I love the sculpted details, especially the dented, pock-marked arm and shin guards.  The shoulder pads look good and rest naturally on Venom’s shoulders, attached to the soft rubber torso overlay.  Using the Ultimate Cap base body was a smart idea– the fairly thin chest means even with the overlay in place the figure’s proportions still look good, not overly bulky.

This is the second Flash Thompson Venom figure, following up the Marvel Select version from 2012, and while both are really nice figures, the Legends version does bring one totally cool new feature to the table.  Agent Venom features a plug-in backpack sporting five symbiote tentacles, which are sculpted with a great sense of motion and add another dimension to the overall figure.  The tendrils alone would be cool, but my favorite part of them are the clawed tips, which are sculpted to hold some of the extra guns packed with the figure.  It’s a really cool effect, allowing Flash to wield all four of his weapons simultaneously.

Agent Venom is a smart choice for Hasbro to release now, since he’s got the crossover appeal of both a Spidey character and member of the (suddenly red-hot) Guardians of the Galaxy.  And I’m glad they found a venue for this figure… with all the thought and planning and strong design the Marvel team invested in this figure, it would have been a shame if he never saw the light of day.  Agent Venom is hitting Walgreens stores nationwide right now, so be on the lookout at your local store.  He’s being released both individually (in the toy aisle) and in an end cap display, so give your store a good look if you want to find him.  Happy hunting! 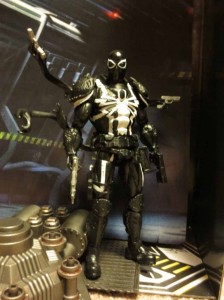 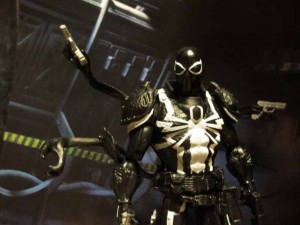 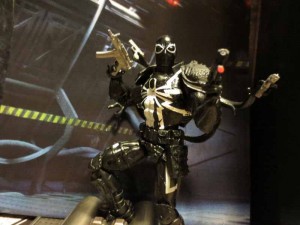 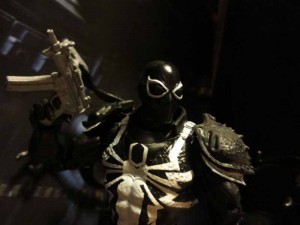 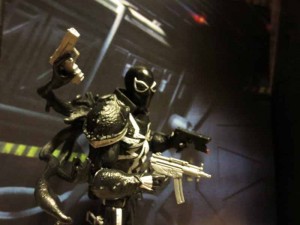 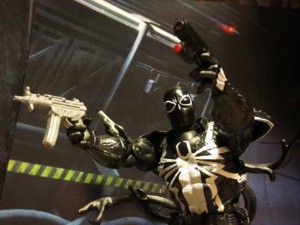 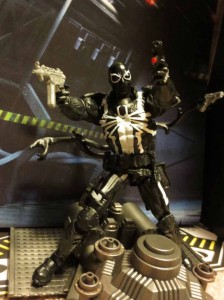 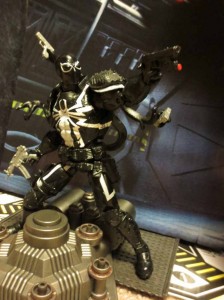 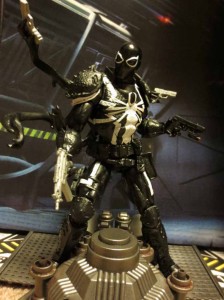 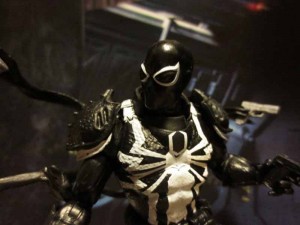 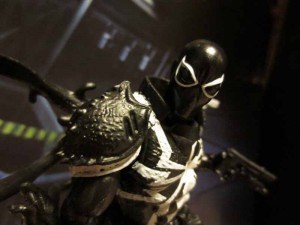 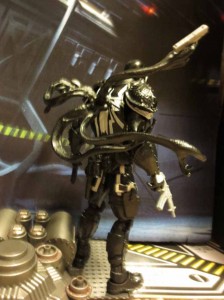 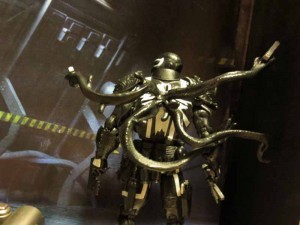 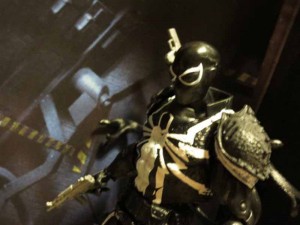 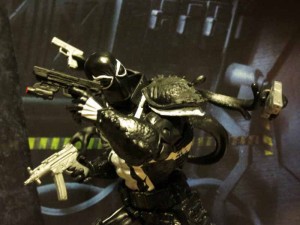 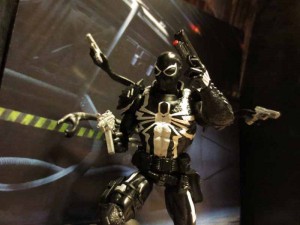 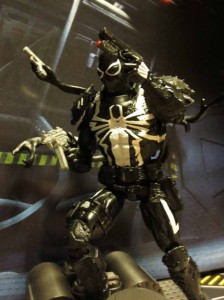 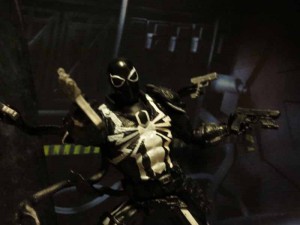 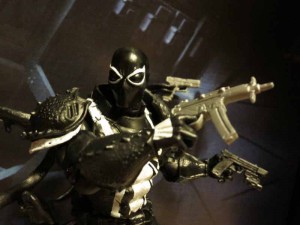 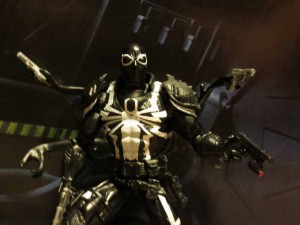 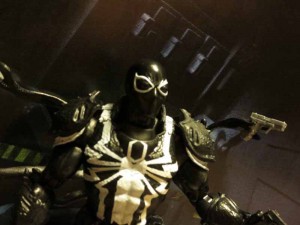 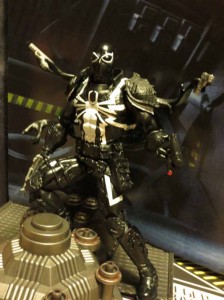 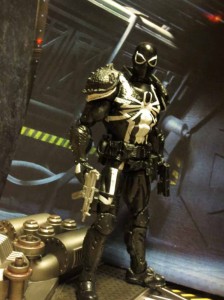 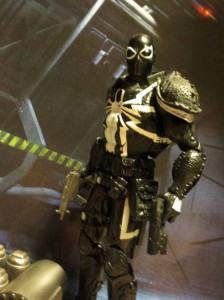