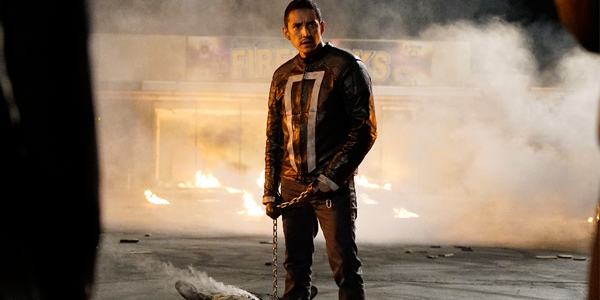 It’s about time the Agents of S.H.I.E.L.D. and the Ghost Rider joined forces in classic Marvel Team-up style.

It turns out all roads lead to a classic Marvel Team-up this week on Agents of S.H.I.E.L.D. when the Ghost Rider bumps into Coulson and Mac. The Agents and Robbie both are looking for answers from Robbie’s Uncle, who is in jail for connections to the “ghosts”. After a great car chase the Rider is captured, and given a chance by Coulson. Mac is in shock, but our old pal Coulson seems unfazed, mostly due to his interactions with the Avengers. It was a great moment to see how willing he was to accept the Rider, and shows that although the chracters has grown Coulson is still the the same guy who helped launch the MCU 8 years ago.

Mean while Daisy kidnaps Jemma to help her gain access to the SHIELD list of Inhumans. In doing so they find out that James might be in danger. He does check in with S.H.I.E.L.D. but is staying off the radar, working in a fireworks store. The explosive Inhuman is ready to help Jemma and Daisy, but turns out he is working with the Watchdogs, to take down all the Inhumans. After wanting the gifts for years, James is now miserable with them, and rather than live with the Inhumans he is willing to help kill all of his kind as long he is the last one to die. Daisy saves the moment further breaking her bones, and when all looks lost Robbie shows up to save the day. The fight of the firebugs is short, but it left the Rider with his signature chain and possibly a team.

The biggest moment of the show was for the deep Marvel fans and the reveal of the book that the “ghosts” are looking for, the Darkhold. In the history of the Marvel Universe the book has connections to magic and more specifically vampires. All the fans sites out there are talking about this is the connection to Doctor Strange, but I have different thoughts. The later hour allow the Agents of S.H.I.E.L.D. to deal with some darker themes, Ghost Rider being the focus but what if he is not the only one coming out of the darkness. There have been rumbles over the past few years since Marvel got the right back to the Rider, as well as Blade. And recently with the rumors of Blade staying with the MCU and Marvel TV could the famous vampire hunter be heading to TV? Only time will tell, but the the Darkhold’s comic roots, it is in the realm of possibility.