The Agents Of S.H.I.E.L.D. Go From Mystic To Science 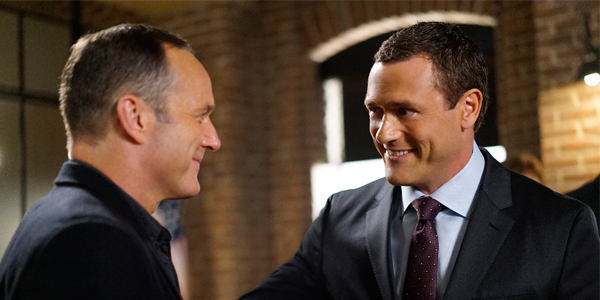 What seemed mystic last week on Agents of SHIELD got a much more grounded angle this week, and the new Director is super.

This week went deeper into the “ghost” from last week. The team was able to see the “ghost” on surveillance, realizing this was more than the ramblings of crazy mobsters. As they investigated the “ghost” they realized it was linked to a tech firm. We also got to watch the ghosts go from monsters to humans trapped in some type of ghost like state related to an experiment and a book. Knowing Dr. Strange is coming out in a month and Ghost Rider is in the show, fans may want to believe in magic, but it might be too soon.

Speaking of Ghost Rider, Robbie and Daisy got a little closer also tracking down these ghosts. Sky is clearly breaking down both mentally and physically, suffering bone fractures and a bit of loneliness. Sky is slowly revealing the background of the Rider for the audience, revealing his childhood and some of his family history. We did not get as much fire action this week, but enough to once again impress fans.

We also learn a bit about the new Director, who is rather super. Although all the details are out of focus we do know he is powered. May takes the fight to him in an altered state, and he looks more Luke Cage than suit. He mentions Inhuman, but it is unclear if he is one of then or a Super Soldier as he also says he stepped up because Steve Rodgers stepped away. His name form clues in the episode is Jeffery Mace, and form the comics he was an unpowered man who filled in for Captain America after he was lost to the icy depths, to keep up public morale.  It is clear he has powers, and a very out going almost Cap like personality, but he is also hiding something.

We are still in the building phase of the season, with the characters just getting used to the new status quo. Once all the intros are over hopefully we will get another great season from the team without too many casualties.