The Agents Of S.H.I.E.L.D. Work In The Shadows 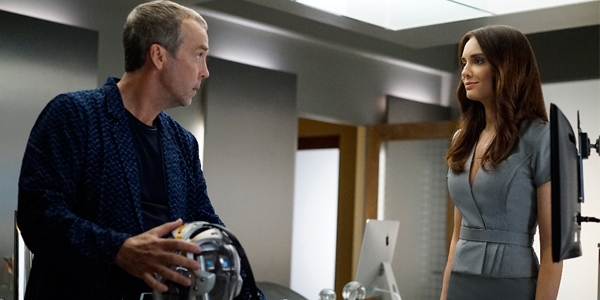 With the power out across the world the Agents of S.H.I.E.L.D. are forced to fight in the shadows and come into the light when it was all over.

The team was scattered, surrounded by danger but by the end of the episode S.H.I.E.L.D. was reborn. Posing as Inhumans the Watchdogs started to take out the power in select cities around the world. Yoyo stuck in Miami with a Watchdog kill crew, Daisy with Robbie in LA, and May fighting for her mind and life with Simmons and Radcliff.

It turns out the Watchdogs got the Sokovia Accords list of powered people, and targeted Inhumans around the world. They tried to take out Yoyo, she was able to take down some as Fitz, Mac, and a powerless handed Coulson arrived just in time. Going low tech Fitz was able to find the source of the blackout and stop the Watchdogs. IT was impressive to see Fitz fight along side Mac and Coulson, he has come a lon way from season one.

Meanwhile in LA Robbie and Daisy were able to save Gabe from a street gang, thanks to the fact the the car was pre-computer chips. Daisy is hurt, in the scuffle, and they all go back to the Reyes house. While Robbie is out getting supplies Gabe threatens Daisy to leave his brother alone, and before Robbie is back Daisy is back out in the wind.

And in Radcliff’s home, Simmons and the Doctor are working a a cure for May. Their idea; let her die and revive her, you know like rebooting a computer. All is working well until they too are struck by the Watchdog’s power outages. With only moments left to save May, Radcliff pulls the battery, covertly, out of Aida to power the paddles to shock May back to life.

The Agents take down the Watchdogs, and reveal themselves, well most of them, to the world again. The new Director announces that the new S.H.I.E.L.D. is here to protect the world from all threats.it is a whole new day and who knows what the new public S.H.I.E.L.D. will be like, and how the population of the world will react to them.