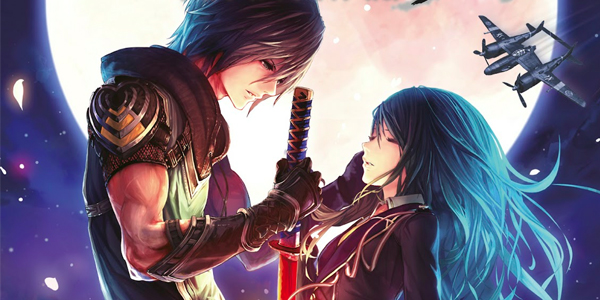 As any self-respecting ‘shmup’ fanatic already knows, CAVE’s developers have been releasing quality bullet-hell titles for over two decades, earning their title as the true kings of the genre.  Previously unavailable outside of Japan, Rising Star Games has published one of CAVE’s latest titles, Akai Katana, domestically as an Xbox 360 exclusive.  It’s big on fun, but a bit short on content with an unfortunately poor presentation and steep price tag.

The thing about Akai Katana is, it’s a much deeper game than it gives itself credit for.  I found tutorial videos quite by accident by clicking the “B” button on the main menu and discovered three different modes were available through some unintentional menu navigation as well.  While no real explanation of the different modes is made apparent (I’ll touch on those in a bit) it’s extremely odd that the tutorials weren’t made more apparent as they detail several gameplay mechanics that are altogether new to CAVE titles.  At first glance, Akai Katana is familiar enough — you navigate your ship in all directions around a horizontal-scrolling 2D play field, destroying enormous enemies while narrowly avoiding the hundreds of projectiles being blasted at you at all times.  One fire mode, assigned to the right trigger, will uleash a wide spread of bullets while maintaing maneuverability while the other, initiated by holding the “A” button, focuses a powerful front-facing attack at your enemies while slowing your movement.  You can also carry a limited supply of bombs that will clear the screen of all enemies and bullets when deployed. 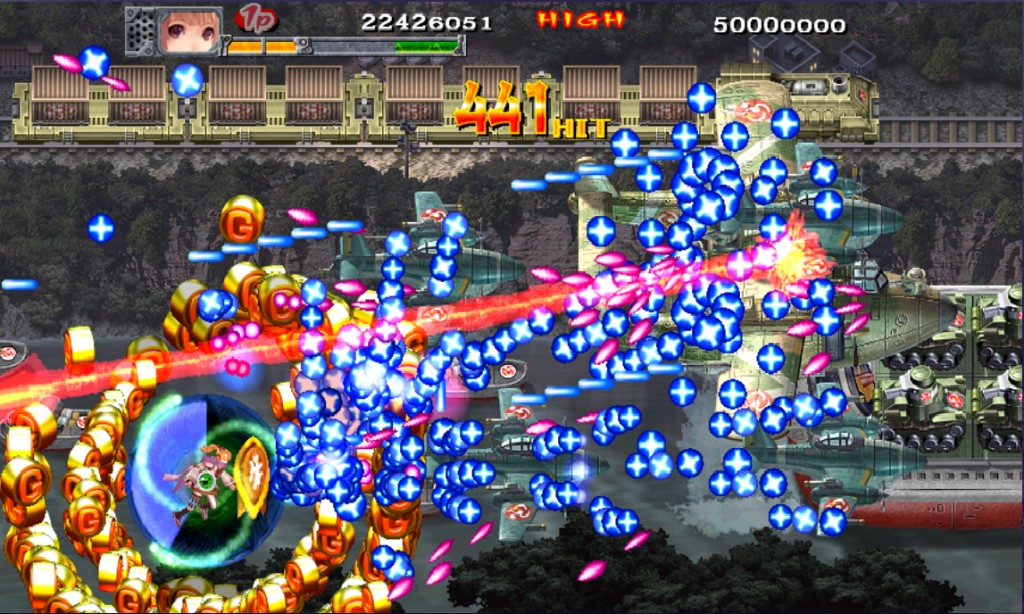 Similar to CAVE’s hit, Espgaluda, you can also switch to a “Spirit Form” assuming you have a supply of energy to burn through.  Energy can be obtained by destroying enemies and with many opportunities to capitalize further on energy that’s already been collected.  It’s important to pay attention to the different ways to obtain bonus energy in the tutorial because, once you stock some and make the switch to your Spirit Form, you can get a true feel for the game’s unique scoring system and survival techniques.  See, anyone can grind through the game and eventually get to the end even if they die a thousand times in the process and take advantage of the generous inclusion of unlimited continues, but they’d be missing the fun of the game — to learn enemy patterns and master the combat system in such a way to finish the game with minimal losses and the highest score possible.

In Spirit Form, your ship transforms into a ninja-like warrior who is completely invincible to enemy bullets as long as you aren’t holding down your direct-attack button (but you may tap the spread attack button to shoot while maintaining your defense).  Once the bullets hit your protective bubble, however, they don’t disappear – they simply are briefly deflected and continue to circle around you, waiting for your energy to deplete.  If you manage to kill the enemy ship that shot the bullets at you while in Spirit Mode, all the bullets that came from that ship will instantly turn to gold — the best means of scoring high in the game.  Upon changing back into your normal form, you can collect this gold.  If your energy in Spirit mode runs out while there are still swarms of bullets around you, they will briefly be pushed away due to the force of energy expended as you switch back to your normal form but will quickly zoom in on you, usually resulting in a quick death unless you’re able to make a narrow escape. 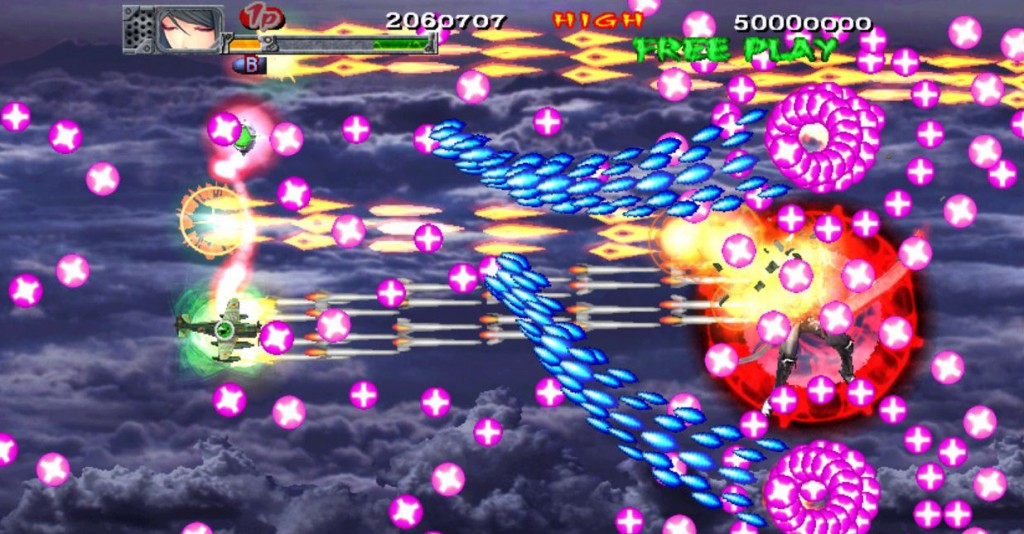 The three different modes that Akai Katana offers (as far as I can tell) are as follows — Arcade Mode is the original 2010 arcade experience while Climax Mode is a higher-res, 16:9 version that’s been retooled to look nice on the Xbox 360, but with no discernible gameplay differences.  Slash Mode appears to be a completely overhauled version of the game with a different spin on the Spirit mechanics.  You are no longer invulnerable in Spirit Mode but instead have access to powerful new attacks — by defeating enemies in this form, you are granted huge floating katanas or large silver orbs that can be used to inflict devastating damage to your enemies.

Having gotten used to the 3D polygonal direction that CAVE went with Deathsmiles I & II, I was a bit surprised to see them revert back to the very old-school aesthetic of sprite-based graphics.  While the intro menu looks fantastic, with really sharp artwork, it’s still very disappointing that there are hidden menus (for no apparent reason), a complete lack of explanation of the different game modes, and odd omissions that are present in other CAVE titles (there are no boss training modes and no easy way to skim through replay videos to learn strategies).  Still, it’s still a recommended buy for any fans of this niche genre of gaming, even if it’s priced a little high for what you get.  I mean, sure it encourages numerous playthroughs in order to truly master the game but, at the same time, every run is only about a 30-minute long experience from start to finish.  A $40 price tag, while cheaper than the standard retail title, is fairly high for this type of game — especially with XBLA offers a growing library of Shmups every bit as solid as this title for significantly less (Sine Mora comes to mind).  Even so, fans of CAVE’s previous works will find a lot to love here while dedicating countless hours to learning Akai Katana’s interesting new mechanics and newbies can still have a blast shooting everything in sight while dying every few seconds. 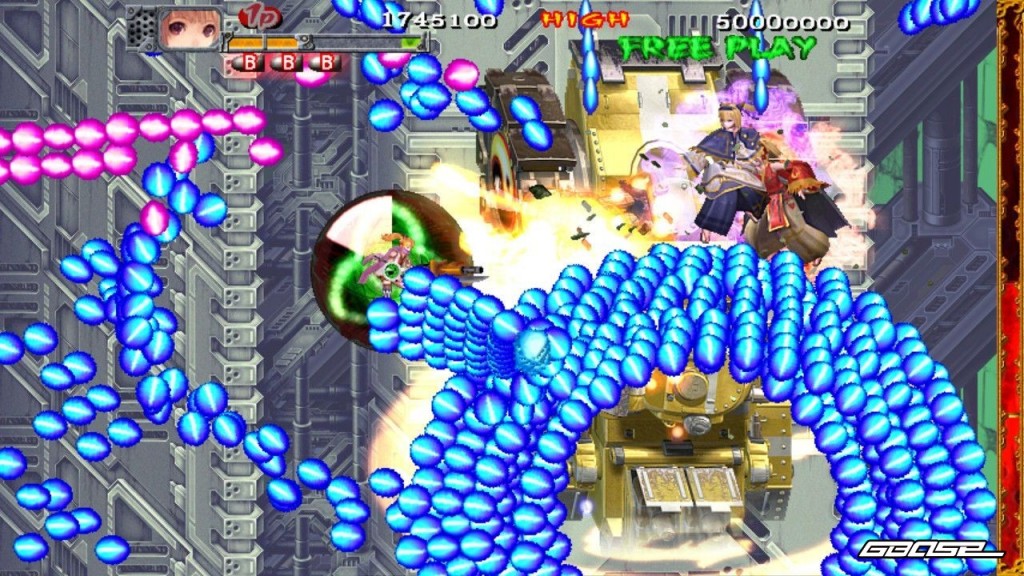