Diamond Select Toys’ Aliens Minimates line has been creeping up on people, thrilling both movie lovers and Minimates collectors with its detailed mini-figures of the Colonial Marines and Warrior Aliens from the 1986 action film Aliens. But there has only been one set of Minimates based on the original 1979 Alien film… until now!

Hastings and MovieStop stores (and gohastings.com) are now offering an all-new Alien Minimates box set, with three new characters and a brand-new version of the “Big Chap” alien!

Titled “Crew of the USCCSS Nostromo,” this four-pack of Minimates mini-figures includes the Nostromo’s captain, Dallas; ship’s navigator Lambert; and engineer Brett in their on-ship looks, as well as a new Xenomorph figure with a glossy black paint scheme. Called the “Big Chap” on set, this alien has a clear dome over his painted skull details. Each 2-inch Minimates mini-figure features 14 points of articulation as well as fully interchangeable parts and accessories, including an alien egg, a chestburster alien, a facehugger and a flamethrower, all packaged on a full-color blister card. 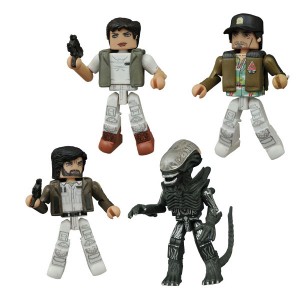 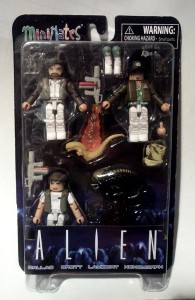 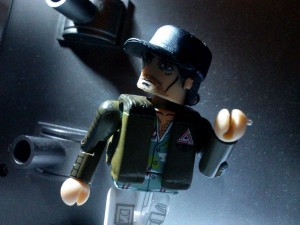 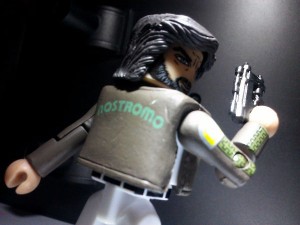 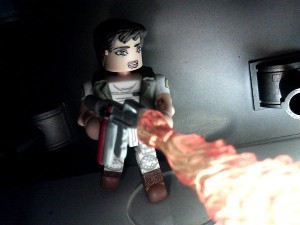 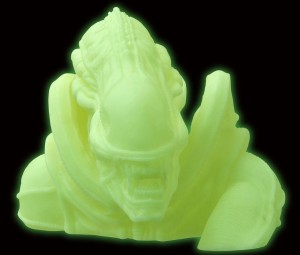 This Alien set joins the previously released Alien 35th Anniversary box set, with Ripley, Kane, Parker and a matte version of the Big Chap, and will be followed by Aliens Minimates Two-Packs Series 3, which will add the 1979’s film’s distinctive space suits and the ship’s synthetic human Ash to the line-up. Offerings based on the 1986 sequel Aliens include Aliens Two-Packs Series 1 and 2, Aliens Single Packs Series 1, and Aliens Deluxe Minimates Series 1, with the Power Loader and Alien Queen.

And if you’re an Aliens fan, be on the lookout for the new, glow-in-the-dark Warrior Alien Vinyl Bust Bank, also available exclusively from Hastings, MovieStop and gohastings.com! It’s got the same detailed sculpt as our regular Warrior Alien bank, but it is cast entirely in glowing material! In stores and online now!