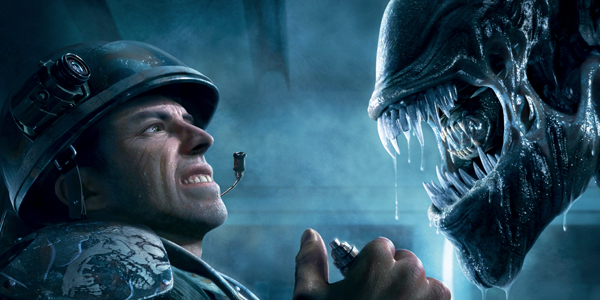 To put it bluntly, Aliens: Colonial Marines is a broken, unfinished mess.  With nearly seven years spent in development and in the hands of four very capable studios, it seems inconceivable that the game touted as the official sequel to James Cameron’s action/sci-fi masterpiece could have turned out to be one of the biggest disappointments in recent memory – yet here we are.

Following the events of the film Aliens (but before or during Alien 3), a group of Colonial Marines receive a distress call from Corporal Hicks detailing massive casualties and requesting an emergency evacuation for himself and two other survivors, Ripley and Newt.  The marines and head off to investigate their last know location aboard the derelict U.S.S. Sulaco, which was the setting of the climactic Power Loader battle at the end of the film.  Players take control of Christopher Winter, a member of the search and rescue team, but things quickly go awry upon their arrival.  The vessel has been infested by xenomorphs who waste no time collecting your fellow squadmates and leaving them with chest-bursting souvenirs.  To make matters worse, you stumble upon evidence that the Weyland-Yutani Corporation has been researching the facility just before they send waves of dropships to the Sulaco in an attempt to flush out the marines and prevent their involvement.  What ensues is a three-party war that plays out throughout the game and brings players to familiar locations, including LV-426 and Hadley’s Hope.  The plot sounds like a lot of fun – it was thought up by Battlestar Galactica writers Brad Thompson and David Weddle, after all – but the game was executed so poorly that the story never feels as exciting as it should. 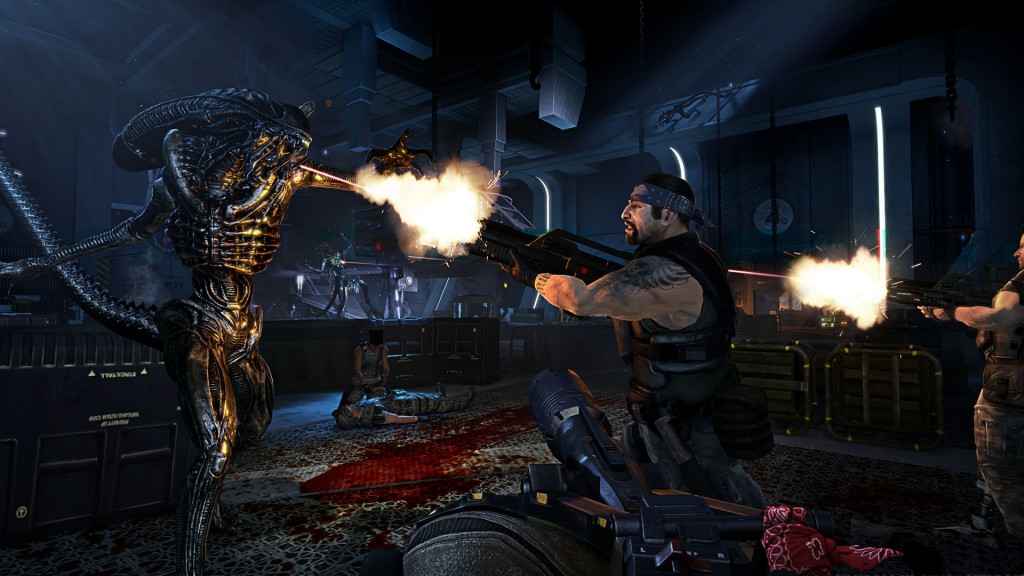 I remember sitting in a dark room at last year’s PAX East and being shown some great footage of the first few minutes of the game.  The graphics looked impressive for a title that was still under development, the score sounded fantastic, and it looked like they had nailed the atmosphere present in the Alien franchise.  Why the finished product looks inexplicably worse than the demo footage is extremely disheartening.  Textures appear muddy, the lighting effects look like they were pulled from a game six years ago, and the character models look anything but convincing.  To make matters worse, the animations range from stiff and awkward to just absent altogether.  Granted that these issues alone aren’t enough to make the game unplayable, but the visual aspect of the source material is so iconic that the sloppy aesthetic of this title just sticks out like an ugly, sore thumb.

The reason the film worked so well is because of the tension that was built up as you watch a group of marines up against an unstoppable enemy the likes of which none of them had ever seen.  That tension is destroyed here due to several poor design choices, and a slew of technical issues.  The first time I encountered a xenomorph, just a few minutes into the game, I was trying to cut a fellow marine out of an alien cocoon when it appeared out of nowhere, hissing in my face and knocking me backward…then it ran around the corner and just stood there waiting to get shot at.  It’s not a good sign when the very first enemy you face is glitched and, sure enough, running into xenos that were partially stuck through the floor or halfway through a wall were a common issue throughout the experience. 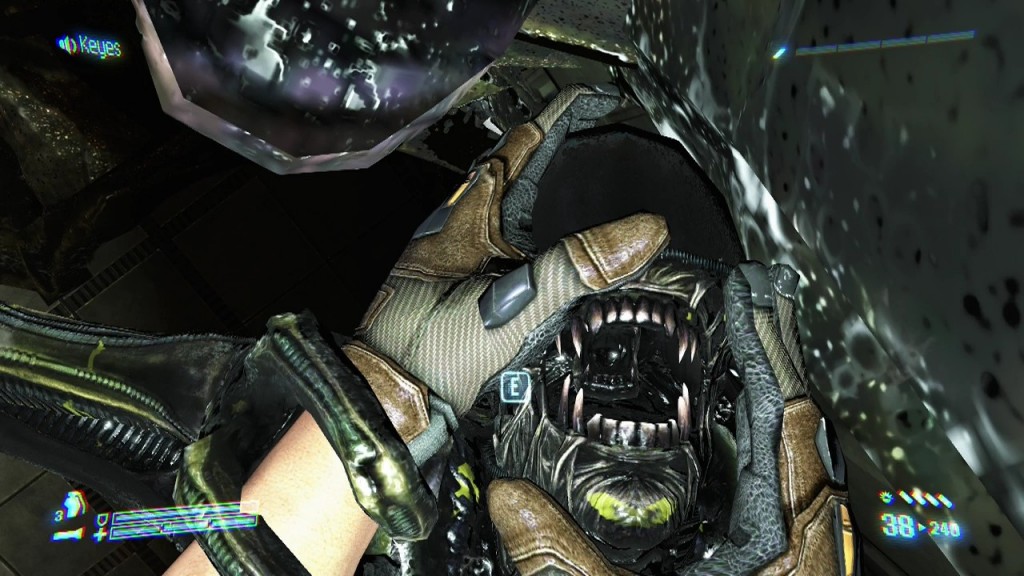 When they do attack, they will typically run straight at you, swipe at you once, and then leap back and stand there for a moment, as if checking to make sure you’re all right and give you a chance to shoot them several dozen times.  This curious behavior is compounded by some incredibly odd movement animations.  The xenomorphs have a tendency to walk upright on their hind legs and stiffly shuffle about as if they are trying to balance an egg on their head.  A couple areas did genuinely harken back to the film; primarily those where you encounter xenos in foggy environments or dimly lit corridors with strobing lights.  This was simply because it made the enemy more difficult to see, as if they could pop out at a moment’s notice for an ambush.  As with any frightening component, less is certainly more.  I think the biggest reason the xenomorphs here ended up as uninteresting and non-intimidating antagonists is that they were simply overused.  By limiting their appearances, but making each alien much more formidable, the devs could have made an incredibly tense experience.  Instead the player is constantly swarmed by scores of enemies at once, each of which are easily dispatched by a pulse rifle burst or shotgun blast, which not only makes the aforementioned technical issues so much more glaring, but it also diminishes the perceived threat that each alien poses. 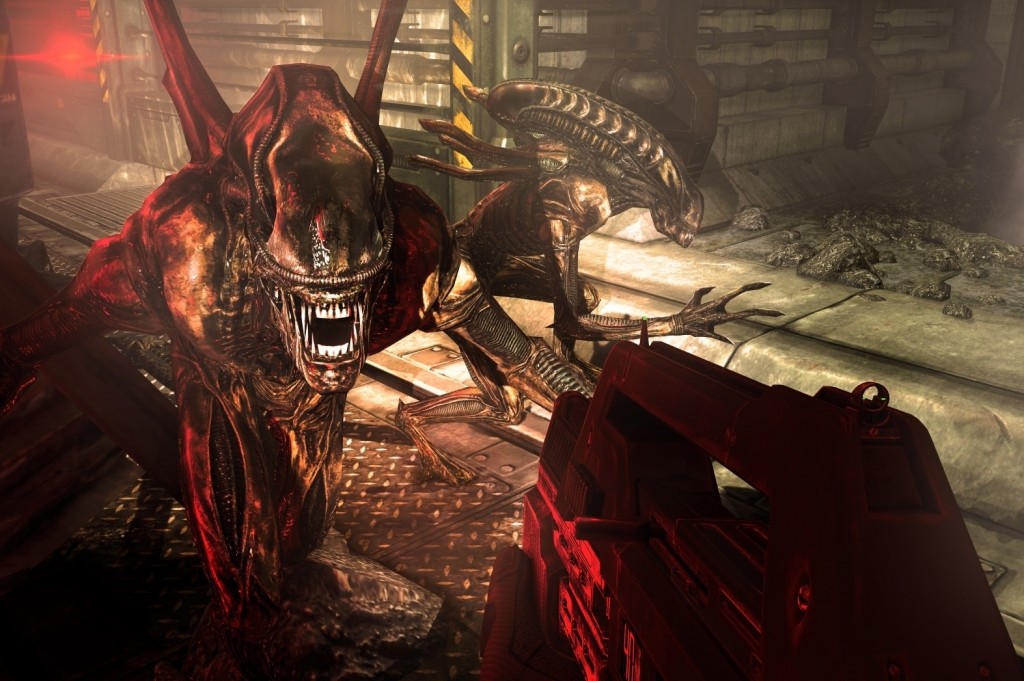 The Weyland-Yutani mercenaries that you face don’t fare much better in the animation department and quickly make the game feel like a more generic shooter than it deserves to be.  These soldiers will typically rush you by running out of corridors and open doors (as opposed to the xenos, which seem to simply appear out of thin air, walls, or rock formations), but these open corridors serve as little more than entry points.  If you try to walk down them or even shine your flashlight down one, you’ll only see a flat black texture where a hallway should be.  This could have been alleviated by doing something as simple as shutting the corridor off with a closing door after the troops exit, but instead was left as is.  I don’t want to sound nitpicky, but this is the stuff that kills any immersion you had felt with the in-game world and would have been such an easy fix that one can only assume that the devs just didn’t care.

If they had read the script, I can’t say I’d blame them.  The dialogue in Aliens: Colonial Marines is downright terrible and the voice acting is poor at best.  In between lines of clichéd modern-day marine jargon, characters offered up insightful quips like, “we had a thing…a sex thing” (describing a female squadmate) and the classic “shit’s all blowing up and shit.” None of the scripted dialogue made me take any of the characters seriously, let alone care about their plight.  I did enjoy the fact that iconic weapons like the pulse rifle, smart gun, and tiny lipstick-sized grenades are all usable, but the ridiculous weapon upgrade system smacks of Call of Duty-esque nonsense.  True, the Call of Duty franchise proved to developers everywhere that a shooter with no plot to speak of and no coherent story or level progression can sell millions if marketed well – but if you want to make a COD clone, it better be polished like one.  Literally every aspect of the titled feels unfinished and half-realized.  As offensive as it is that this game was actually released and aggressively marketed to fans is one thing, but to charge a full retail price of $60 for what is essentially a budget-grade title is unforgivable. 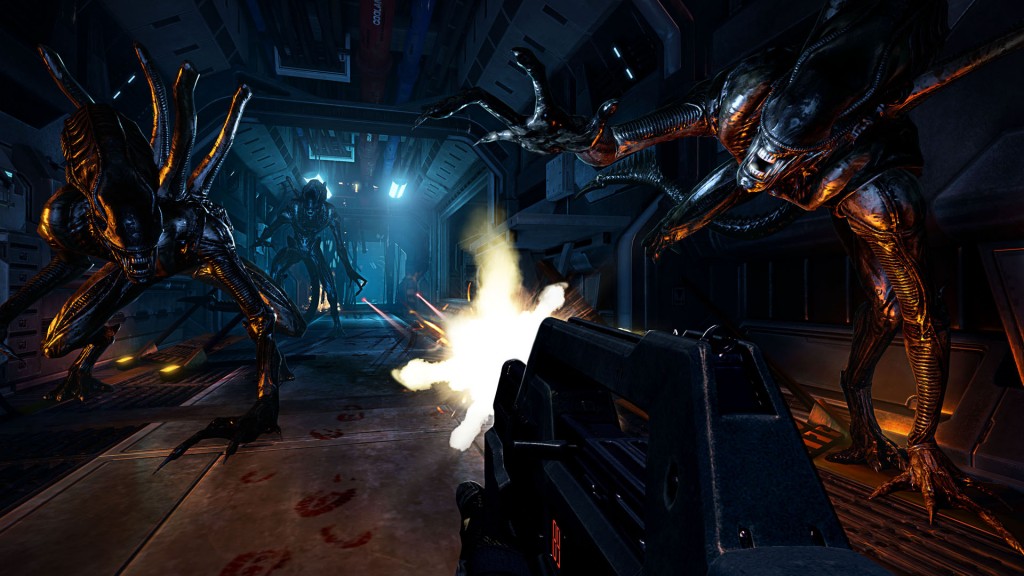 With blurry, outdated graphics, tons of technical issues, and weak audio, Aliens: Colonial Mariens is more than just rough around the edges – it’s an unfinished product.  It’s clear that the Sega was banking on fans of the franchise to buy the game no matter what (and it worked judging by the sales records) but it really just ended up being a third-rate shooter with “fan favorite” movie references forced in at every turn.  Yes, there are Power Loaders all over the place and you’ll even get to use one against a particularly large, newly designed xenomorph, but don’t expect it to be at all fun…unless your definition of fun is wildly tapping unresponsive buttons while your Loader slowly flails its arms for a while until your enemy is finally defeated.  Actually, during this fight, the alien in question had seemingly clipped through my Power Loader and was off screen during much of the fight until it apparently died and disappeared.  It was the most fun I’ve had since never.  And yes, the guns are cool and they do sound like they did in the movies, but strangely flat – like they don’t have that extra punch that makes them sound intimidating and powerful. Meanwhile, the facehuggers now crawl around loudly moaning like cats in heat.  I don’t remember any of them making anything close to this sound in the films, so why they made that call is beyond me – possibly it’s just so the players are alerted to their presence as the crummy visuals make them a bit difficult to spot. 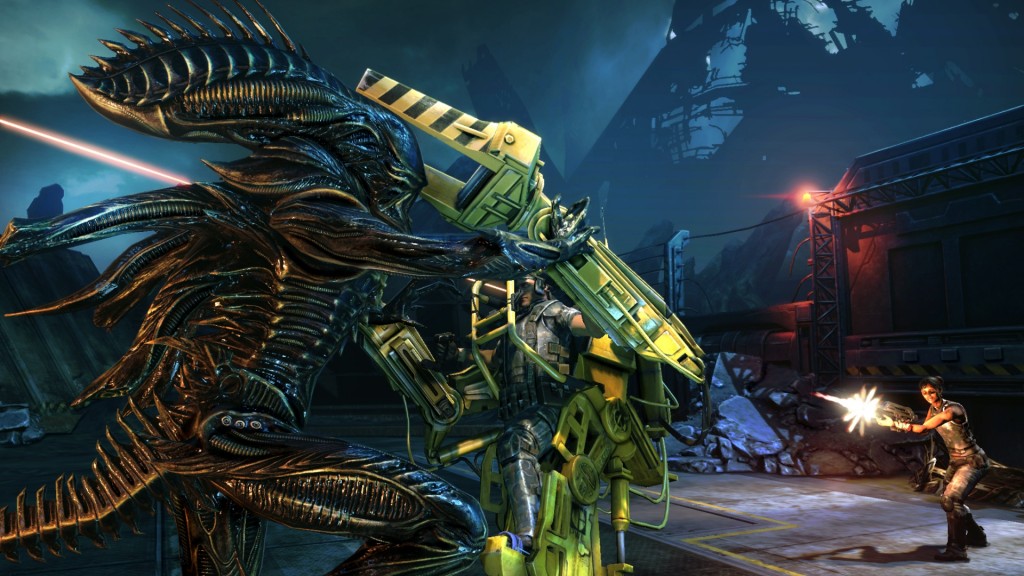 I could literally go on and on, but you get the point.  The game that was released is a far cry from what was promised and, for some reason, not even 100% true to the demo footage from last year.  It’s embarrassing that this is an official part of the Alien canon and a shame that fans still have not received a game worthy of the license.  If there is one positive thing that I can say, it’s that the game is over quickly.  You can run through it in only six or seven hours.  That length on any other title would be a negative point, but here it just means the nightmare will be over quickly, so you can get back to playing better games and forget this black mark on the franchise exists (didn’t Alien: Resurrection do enough damage?)