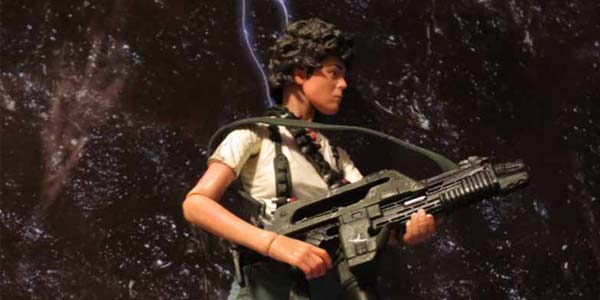 Ripley and Bishop both return to NECA’s Aliens collection, as they appeared in the epic finale of James Cameron’s action masterpiece.

It was a really big deal when NECA landed likeness rights for Sigourney Weaver.  Not only is the actress notoriously withholding when it comes to likeness approval, but her Ellen Ripley is the central character in the entire Aliens film series.  So it’s good to see NECA is making the most out of their big get, and the latest wave of Aliens action figures features a third version of Ripley, based on her look from James Cameron’s Aliens.

With her sweat-stained t-shirt, sling full of bullets, futuristic sort-of sneakers and her jury-rigged Pulse Rifle/ Flamethrower, this is, as far as I’m concerned, the most definitive and iconic look for Ellen Ripley.  NECA’s action figure is an all new sculpt, with another remarkably great portrait of Weaver.  Her grimly determined expression works perfectly in the context of the film’s final action sequence, and Ripley clearly means business when brandishing her customized weapon (to say nothing of the Power Loader she will be able to pilot in the near future).

The figure features lots of articulation– a ball neck, ball shoulders and hips, half-ball elbows and knees, ball wrists and ankles and a very effective ball waist which is hidden brilliantly by her belt and suspenders.  Ripley looks great on her own, or alongside the Colonial Marines she joined on the fateful “bug hunt,” and she features just as much nuanced, film accurate detail as the soldiers.  I love her customized weapon, which sports a great new paint job, complete with lots of scratches and scuffs, as well as some newly sculpted straps to connect the rifle and flame thrower together.

If there’s one area where this Ripley comes up short, it’s paint apps.  They’re certainly not terrible– everything is clean, concise and well applied– and there’s some great, subtle wash detail to weather up both her pants and gun, which adds a great sense of realism.  It’s the sweat stains on her shirt that aren’t pulled off quite as effectively.  The placement and color on her chest and arms is good, but the outline of the stains is too sharp.  This makes it look like a paint app, instead of a realistic stain.  It’s a minor quibble, and from a distance the issue virtually disappears, but this still seems like a strange decision for this particular area.

Bishop also comes back to NECA’s series in the latest wave of figures… or at least part of him.  The beleaguered android, having gone above and beyond the call of duty to rescue the survivors from the mission, is rewarded with the Alien Queen impaling him with her tail, before literally ripping him in half.  The new Bishop figure captures the poor guy in his post-Queen attack state, so he’s appropriately a total mess.  Bishop includes a new headsculpt and torso, while reusing the arms from the first figure.

The new body is really well done, loaded with all the grisly detail of the android’s milky white organs pouring out of his body.  The figure is designed to lie on his back, supported by his arms, and as such his back is quite flat, serving as a base.  I get bummed every time I watch Bishop get ripped apart in the movie, especially when I see the sad, disoriented look on Lance Henrickson’s face.  NECA’s new sculpt not only nails the actor’s likeness, but also captures that heartbreaking expression perfectly.  And just to add a bit of extra nastiness, there’s a whole heap of milky white blood painted all over the android’s body, which completes the look very effectively.

While film accurate, it would seem odd to release literally half a guy as a standard action figure, but NECA found a great solution for Bishop.  Rather than include his ripped-up lower body, the figure is packed with an egg and a Face Hugger.  These pieces will both be available in greater quantities this fall in the awesome Weyland Yutani egg carton six-pack, and after getting a preview of both accessories here, I’m more eager than ever to get my hands on that carton.

The Face Hugger and egg are both all new sculpts, and both maintain a wonderful sense of scale with the figures in the line.  The egg is sculpted open, with its four fleshy flaps rolled down over it’s leathery exterior.  I love the creepy, nasty little details of the sculpt, like the slimy membrane that connects the flaps, and the textured, organic and more than a little sexual sculpt continues all the way inside the egg itself.

The Hugger can fit inside the egg, or stand on its own, with it’s finger-like legs and tail propping it up.  The tail includes a bendable wire which has a surprisingly good range of motion, and all the creature’s creepy details are perfectly rendered in this highly detailed little sculpt.  The only pose this Hugger can’t hit is to wrap around a figure’s face, although with some care the Hugger attached to the previously-released Kane figure can be removed, to give you that variant.

Even if it sort of feels more like an accessory pack than a proper figure, I like the Bishop/ Face Hugger/ egg set a lot.  Between the damaged android, Ripley, and last year’s Alien Queen, the only piece of the puzzle missing from capturing the finale of the movie in plastic is the Power Loader Ripley uses to fight the Xenomorph matriarch.  Thankfully, that deluxe release is coming in just a few short months, making this the first sub-line we’re seeing through to completion in NECA’s toy line.  I can’t wait. 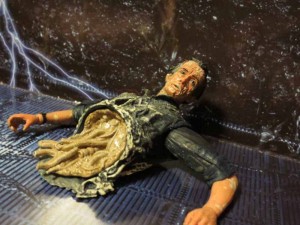 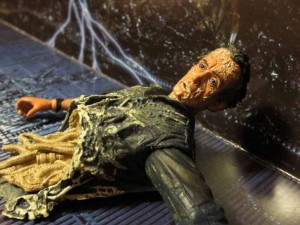 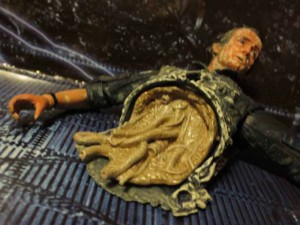 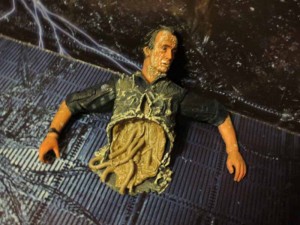 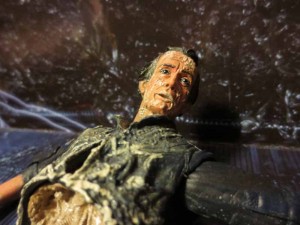 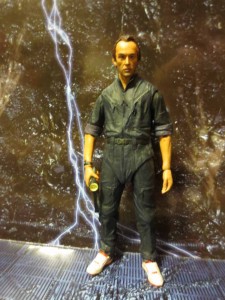 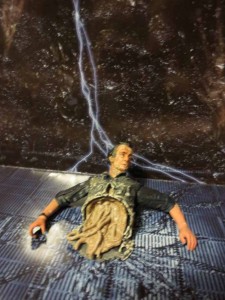 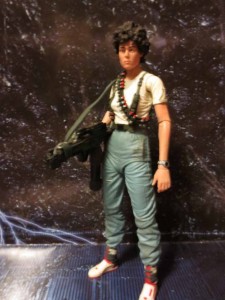 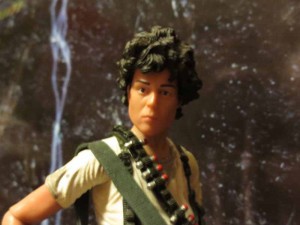 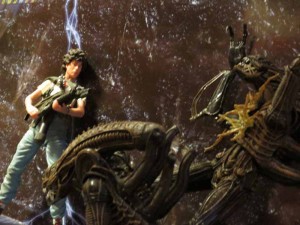 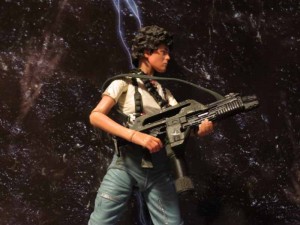 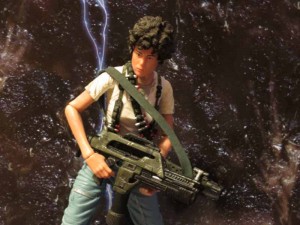 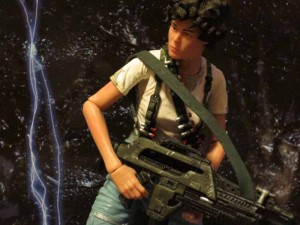 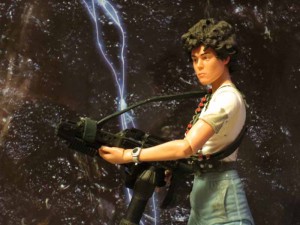 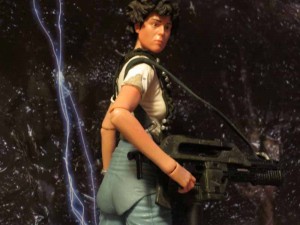 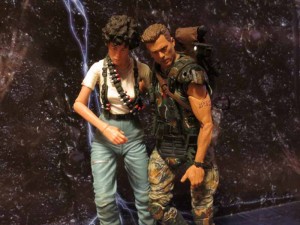 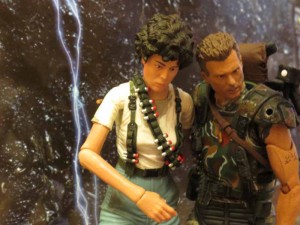 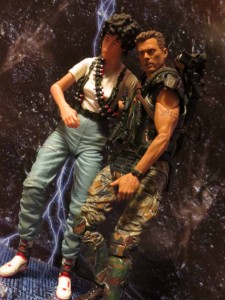 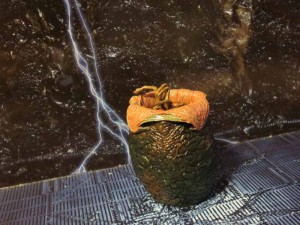 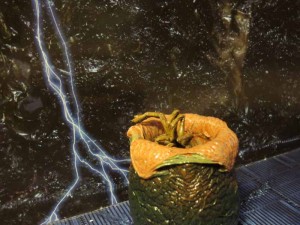 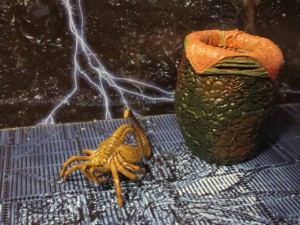 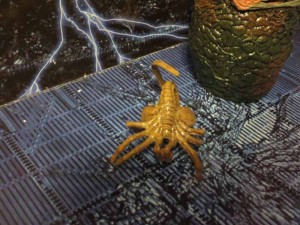 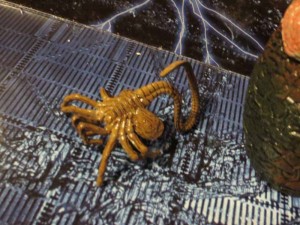 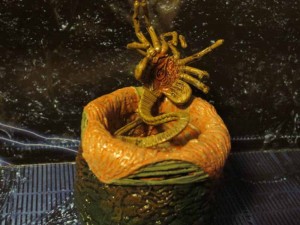 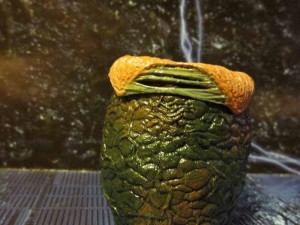 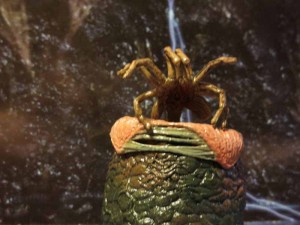 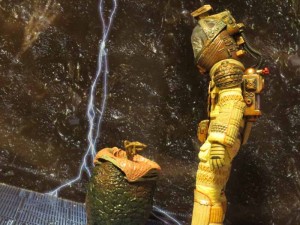 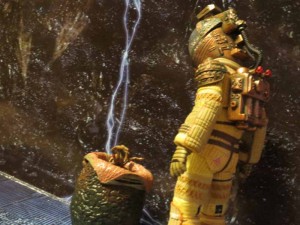