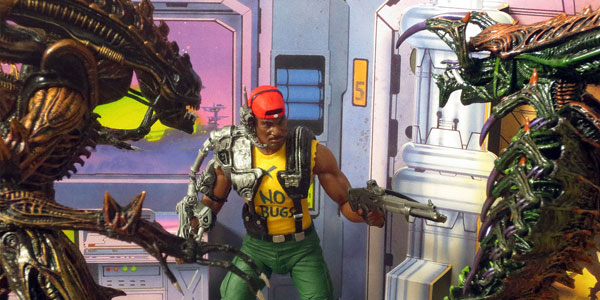 A trio of Kenner-inspired NECA Aliens figures are already contenders for action figures of the year.

I really like a lot of the sub-sets NECA has created within their long-running Aliens and Predator toy lines, but it’s the Kenner tribute collection which is closest to my heart. Aliens Series 13 continues this series within a series, with three new figures all based on Kenner’s notorious early 90s toy line… including our first “Space Marine” to get a mainstream, non-exclusive release.

That Marine would be Apone, whose reimagination might be the most absurd of the bunch, with a cybernetic-enhanced left arm, a backwards baseball cap, and a yellow tank top that reads “No Bugs.” I will never not find the choices behind this character design baffling, but NECA’s figure is incredible. The detail in [] and []’s sculpt adds a sense of texture and realism to the Kenner design, while maintaining the over the top attitude of the original. What impressed me the most is the wonderfully engineered cyber-arm, which features multiple moving parts and hydraulics that allow it to move smoothly with the figure’s actual arm. I was concerned the cybernetic rig would impede Apone’s articulation, but thanks to this miracle of toy design, he retains a full range of motion, in spite of the bulky robotics.

Apone comes packing a laser rifle and two grenades, based on the design of the vintage Kenner toy, which he can wield in his hands or store on his back. I quite like the bendable wire extensions which connect to the grenades, which increase their length and replicate the wobbly rubber nature of the classic pieces, while still allowing for more detail and durability in the sculpts. This guy looks amazing with the Kenner style Ripley and Vasquez, and I can’t wait to see more Marines from NECA in the future.

With a Marine this badass, you of course need some super menacing Aliens for him to fight. This wave delivers, with both the Scorpion and Snake Aliens. Scorpion was my favorite Alien from Kenner’s vintage line, mostly because it was the closest in appearance to the cinematic Xenomorph, but I like NECA’s version for its differences, not what makes it similar. A lot of this creature borrows from the cinematic Alien Warrior (with upper arms borrowed from the AVP Alien), but it’s also covered in newly tooled parts and accent pieces, adding thorny spikes to the creature’s exoskeleton which increase the malevolence of the design.

The Scorpion’s barbed tail and new legs– with some awesome negative space sculpted into its thighs– ultimately makes this black and copper monster more its own thing than a basic Xenomorph clone, which is a good thing. I do wish this figure included a copper colored Facehugger… thus far, the Gorilla is the only NECA Kenner Alien to get this pack-in which was omnipresent with the vintage Aliens. Hopefully, we’ll see a Kenner accessory pack in the future to round out these missing pieces for NECA’s collection?

The Snake Alien, conversely, is an entirely new sculpt, and it is incredible. I assumed this creature would be a bendy with a plastic head, like the vintage figure, but the hood and upper portion of the Snake is actually plastic with a litany of small, clawed arms with can pose on a hinge. This adds so much to the display options of the figure, and adds a level of insect-like creepiness to the already troubling design. This flourish is great, and meshes perfectly with the bendably tail/ snake body, whose wire and rubber ration afford it a great range of poseability which also holds its shape very effectively.

Snake’s head is also all new, and it’s an outstanding sculpt by [] and []. The creature’s jaws actually extend in an interesting way, which essentially makes its inner jaw the entire size of the mouth, complete with two oversized mandible fangs. These fangs are great, and pose on a swivel hinge which gives them a great range of poses, and in tandem with the unique inner jaw, gives this creature a very distinct look while retaining the Xenomorph aesthetic. And the paint work, with a brownish-copper finish on top of a green so dark it looks black at first sight, similarly feels in the vein of the Xenomorph aesthetic while feeling like its own thing.

Even if you don’t care about the Kenner styling of these figures, all three are so thoughtfully designed and expertly rendered, they should be considered must-own pieces for any Aliens collector. They’re surprisingly sturdy and much more poseable than I had imagined, and the designs are as cool as they are outlandish. Look for Aliens Series 13 at specialty retailers now, or available directly from NECA at their eBay Store. 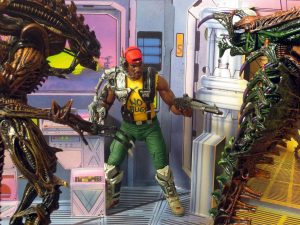 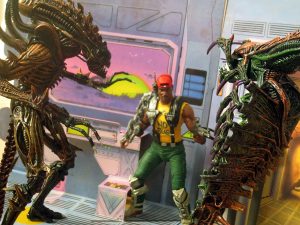 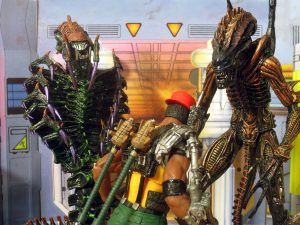 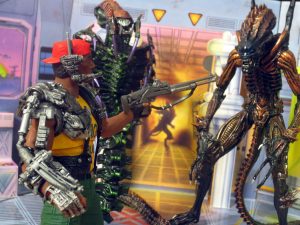 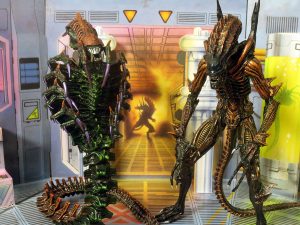 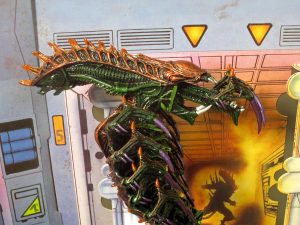 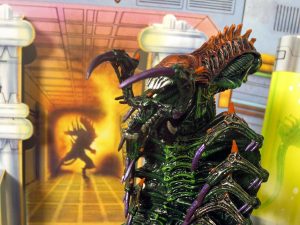 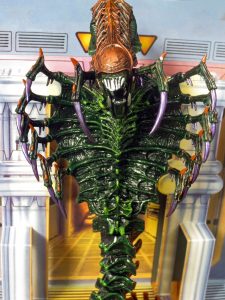 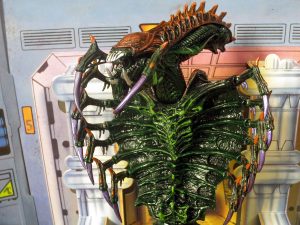 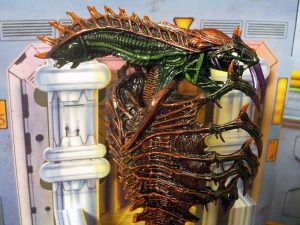 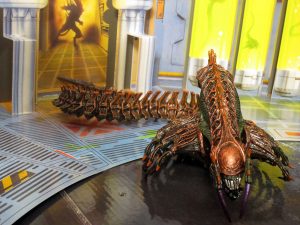 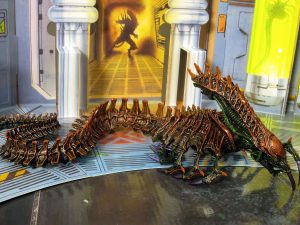 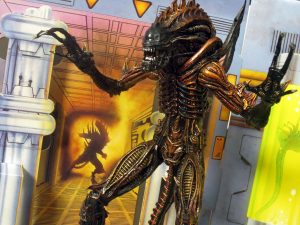 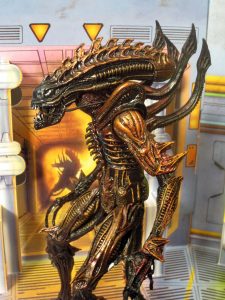 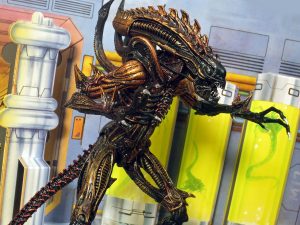 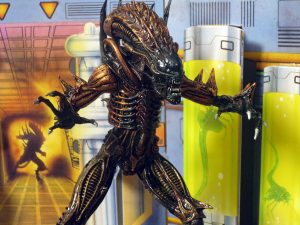 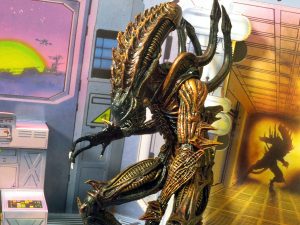 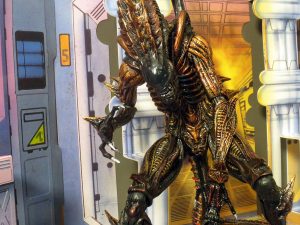 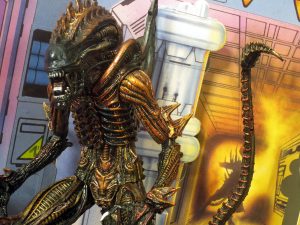 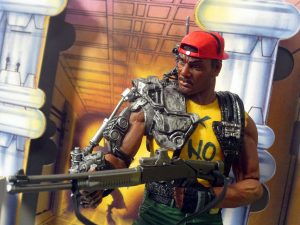 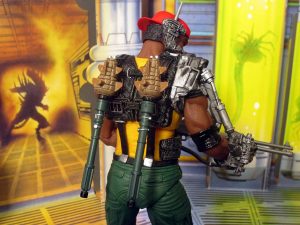 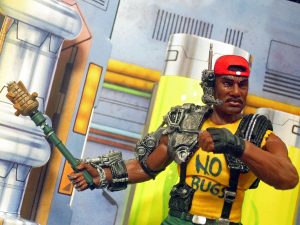 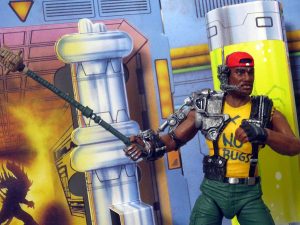 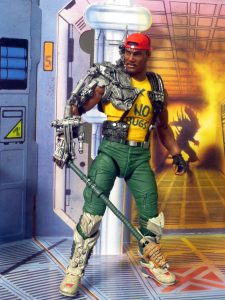 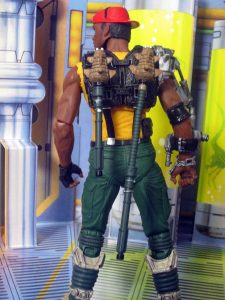 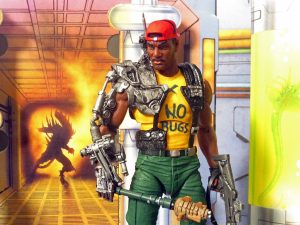 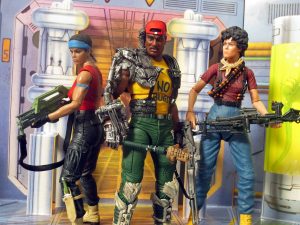