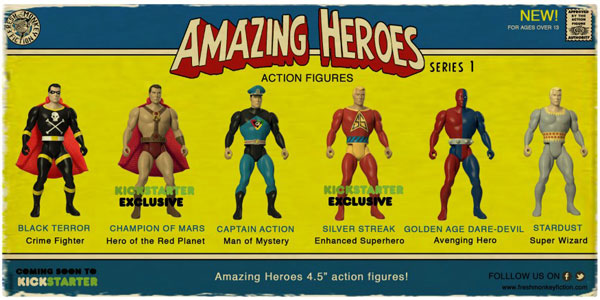 Silver Streak, like Champion of Mars, will be a Kickstarter exclusive, and this stretch goal figure will be added for free with any purchase of the other five Amazing Heroes.  I like the Secret Wars vibe of these figures, and it’s all too rare that we see toys based on the Golden Age comic heroes, so this toy line is pretty unique.  I do hope the characters each get a unique head sculpt; it’s tough to tell from the images so far, but I’d be a bit disappointed if these characters were represented with simple repaints of the same base portrait.  I’m sure that question will be answered in due time.

Thankfully, Fresh Monkey’s Kickstarter won’t launch until August, which will give some wallets a break after the wide range of totally cool Kickstarter campaigns running as we speak.  In addition to the now six figures in Series One, Fresh Monkey Fiction is also planning a “Blank,” an unpainted figure with two interchangeable heads, intended to customize your very own Amazing Hero, which sounds like a fun concept.

And they’ve just launched a poll to help choose the names for a second series of figures.  Sticking with the Golden Age theme, the vote includes candidates like American Crusader, Son of Supermind, Captain Future, a variant Silver Streak and Wonder Man.  You can Click Here to place your vote… and be sure to watch for the Amazing Heroes Kickstarter to go live this August. 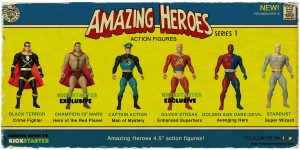 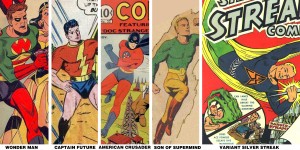 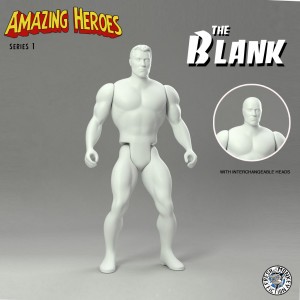