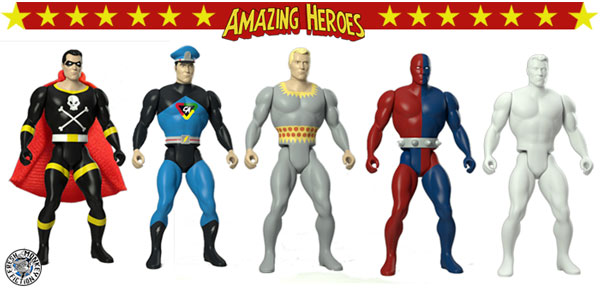 It’s time to get your Golden Age on!

Fresh Monkey Fiction has just launched the Amazing Heroes Kickstarter campaign!  This new line of super hero toys will shine the spotlight on some classic Golden Age characters in a unique, retro style design reminiscent of Mattel’s classic Secret Wars toys from the 80s… and they look great!

The first lineup includes five basic figures– the Black Terror, DareDevil, Stardust the Super Wizard, Captain Action and the Blank Slate (who serves as both a customizable blank body figure AND a nemesis to DareDevil!).  On top of these guys, there are three Kickstarter exclusive stretch goals Fresh Monkey hopes to unlock– Champion of Mars, Silver Streak (who will be a free bonus figure to any contributor at the $80 level or above), and a third new figure being kept under wraps until the Kickstarter campaign advances.

This campaign has some very cool high-tier offers, as well, including a set of figures in special limited edition retro packaging, or even 300 copies of an all new Amazing Heroes figure, intended to be your very own exclusive!

Golden Age characters don’t often get love when it comes to toys, and that’s what makes this new series very unique and cool.  CLICK HERE to pledge to make this series a reality… and check out some images of these great figures below! 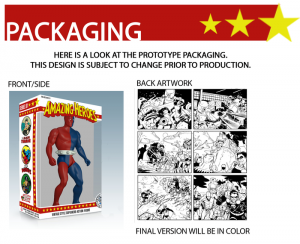