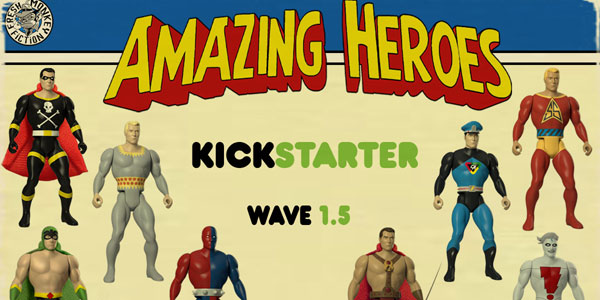 And Mike Allred’s Madman joins the lineup as the latest stretch goal initiative!

Did you miss out on the first Kickstarter for Amazing Heroes?  To recap, this new figure line by Fresh Monkey Fiction will feature retro action figures based on some classic Golden Age comic book heroes and villains, as well as a few surprise additions like Captain Action and now Mike Allred’s Madman.

The figures look promising, with a very Mattel/ Secret Wars aesthetic that feels fun and totally fitting of the concept, and the original Kickstarter campaign was a success, allowing Fresh Monkey Fiction to move forward with their first series.  They did not, however, end up with enough backing to fund the Champion of Mars and Silver Streak, and rather than let these heroes fall by the wayside, they’re now back on the table as part of an Amazing Heroes “Wave 1.5” which will also feature reissues of the first series– Black Terror, Dare-Devil, Stardust, Captain Action and Green Turtle– with new card art by some top comics illustrators.

I love this concept, and the new artwork looks amazing… as impressed as I am with the figures themselves, I’m equally blown away by how great Fresh Monkey has been at networking over the course of this campaign.  On top of Amazing Heroes, they’re co-developing the eagerly anticipated (by me, anyway) reboot of Eagle Force, working with some big names in comics for card art, and expanding their initial toy line in a truly cool and thoughtful way, with the perfect balance of unique and worthwhile repacks and brand new figures.

It makes it very hard not to love Fresh Monkey Fiction in all this, and you can show your love– and support– now through the Amazing Heroes Series 1.5 Kickstarter.  There’s contribution levels for those who missed the first wave entirely, or individual pledges which can get you any individual figures.  Click Here to support this new Kickstarter campaign now!