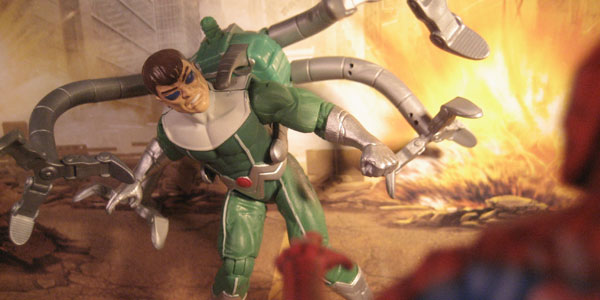 The Amazing Spider-Man movie toys are the most underwhelming toys Hasbro has released in this downer year, but there’s still a few gems in the mix. Case in point, the great-looking Ultimate Doctor Octopus, who is one of the best-looking toys ever made on the eight-appendaged villain. But is he worthy of being called “ultimate”?

Hasbro has been very smart about their movie property toy lines, offering a first series based on past movies and the comic book source material for Amazing Spider-Man, just like we saw with Avengers and last year’s Captain America. The toy company has been less smart with their cutbacks, including terribly limited articulation patterns and less paint detailing, which has caused many of their toy lines to suffer in one way or another in 2012. The Amazing Spider- Man comic series suffers very badly from this lousy articulation, with no wrist, ankle or torso articulation and t-crotch hips that haven’t been an articulation standard for over ten years. 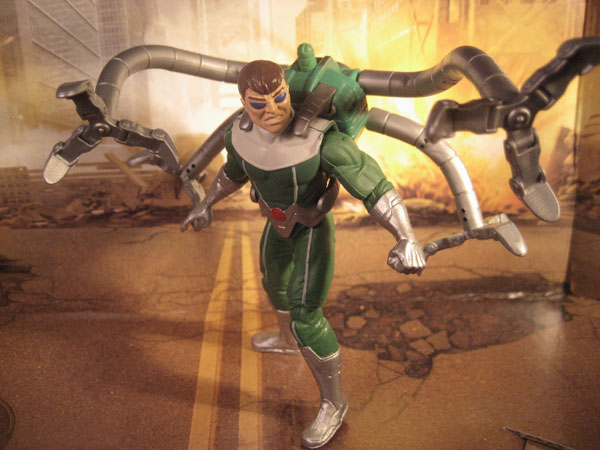 The fact that these figures are so disappointingly basic makes me feel better that all the villains are simple re-do’s of figures we have already seen far better versions of, such as the new Green Goblin and Venom.  Doc Ock was the only new villain who really caught my eye, since I skipped on the previous version from a few years ago (also due to cheap articulation– Otto can’t get a break in the posability department). The new Doc Ock features the villain in his green and silver Ultimates look, and while he’s not as posable as I’d like the figure features a great sculpt that really captures Ultimate Spider-Man artist Mark Bagley’s work brilliantly. From the bad haircut to the funky blue glasses to the frustrated scowl, every bit of Bagley’s new take on Otto Octavius is captured perfectly in this figure, and he makes a nice addition to the Ultimate Scorpion to build Spidey’s alternate rogue’s gallery. 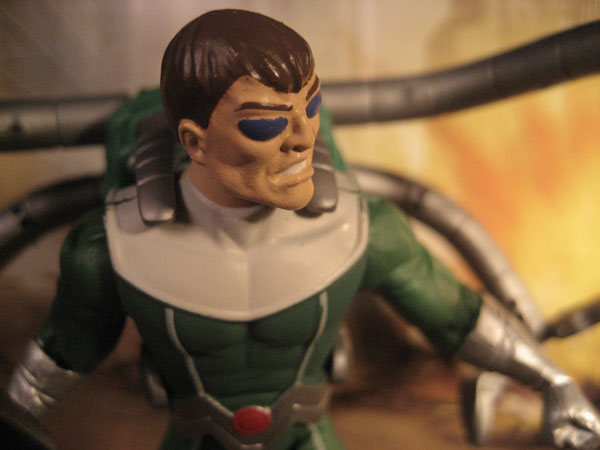 Unlike some other more lithe characters, I don’t miss the limited articulation for the bad Doctor– he’s never been known for his acrobatic abilities– and there’s enough here to get some decent villain poses out of the figure. The details on the costume are sculpted well using an all-new body, and Doc Ock’s tentacles are mounted on a fairly standard (and not too large) backpack that clips onto him snugly. The metal arms are cool, with lots of sculpted detail and two play features– the arms constrict in when you push the button on the backpack, but each can also bend independently thanks to the wire built into each limb. 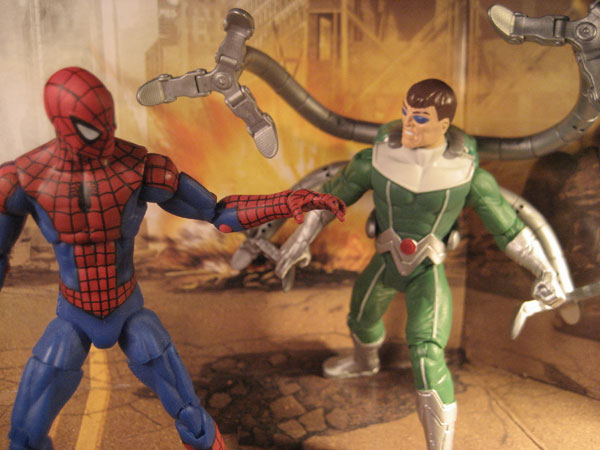 I wish I could like more of the Amazing Spider-Man line, but between the disappointing character selection and the extreme dumbing down of the figure quality, there just isn’t much here to love. But a few of the figures really are worth picking up, and as far as I’m concerned the line has at least delivered one great figure each for the movie and comic sub-sets. The super-articulated movie Spidey is phenomenal, and while the Ultimate Doc Ock isn’t as great as that Spidey, he’s still a cool new take on the character, and one of the best-looking versions of the villain ever released in this scale. 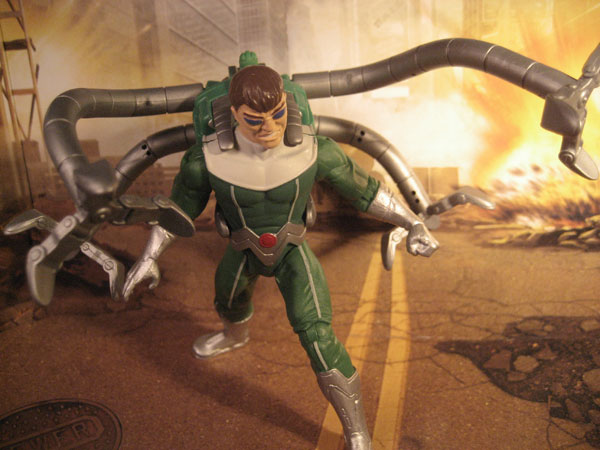 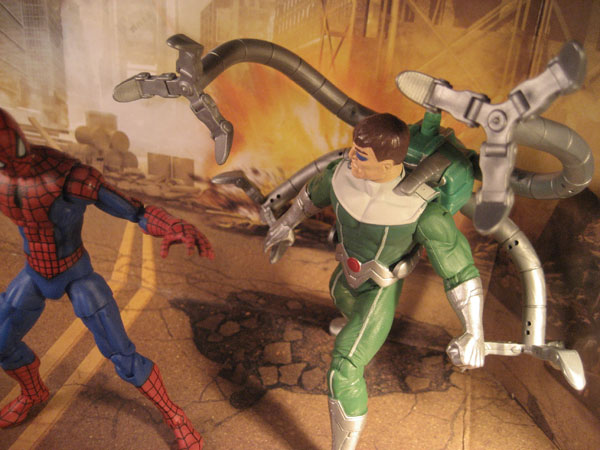 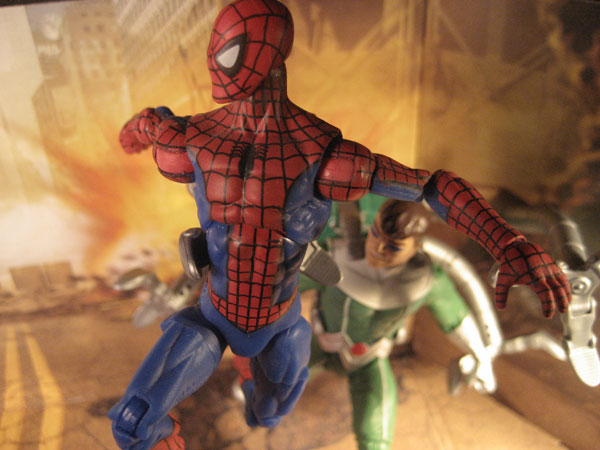 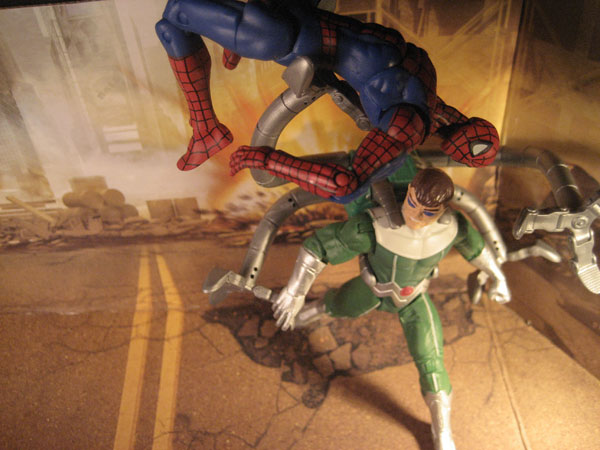 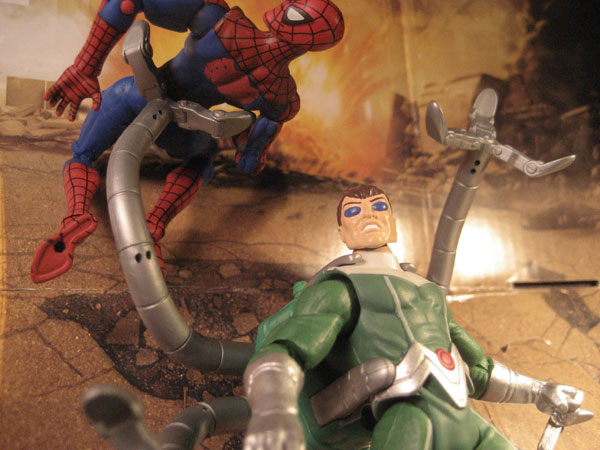