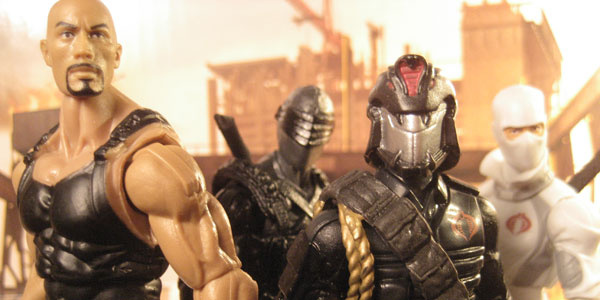 Rumors of an Amazon exclusive GI Joe Retaliation preview set started swirling months ago, and after a lull of no information, we quickly went from confirmation of the set to an in-stock listing, and now the first batch of Retaliation preview sets are shipping out. This set features four figures from Hasbro’s upcoming Retaliation toy line, in a special display box. Three of the figures seem to be identical to their single carded versions, while the fourth gets a new variant, apparently exclusive to this box set. Check out an up-close look at Amazon’s GI Joe Retaliation premiere set right here… keep reading.

The Retaliation preview 4-pack includes Roadblock, Snake Eyes, Storm Shadow and Cobra Commander, all sporting their movie-style looks from this Summer’s feature film. Roadblock, Snake Eyes and Storm Shadow all seem to be identical to the single carded versions of the figures being released at the end of this month, although the two ninjas are missing their play action gear. Cobra Commander is featured in an all-black uniform here, very different from the blue and black pattern of his single carded release. The black look not only lends a realism to the figure but based on the press images we’ve seen, appears to be much more accurate to his movie design, so I’d call that a win. 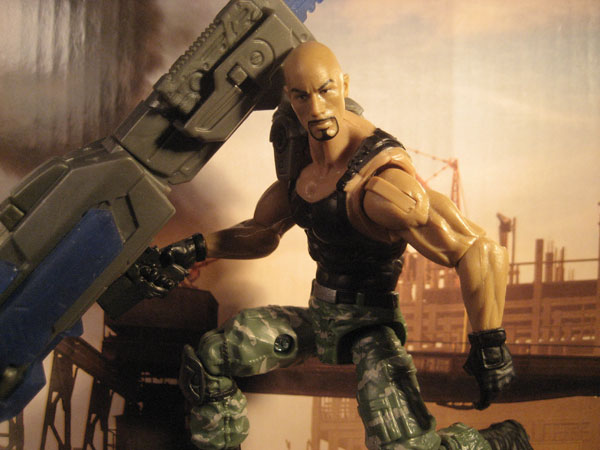 What’s not a win is the already much-maligned limited articulation seen in some of these figures. While the sculpting is top-notch across the board, each figure suffers under some restrictive new articulation patterns. Roadblock is definitely hit worst– with single knees and no ankle articulation, the newest movie Joe looks fantastic (Hasbro really nailed their portrait of The Rock way better than Mattel or Jakks ever did), but he’s very limited in what he can do. The lack of ankles is particularly damaging for me, as the figure’s feet are sculpted to be perpetually parallel, which really adds to the toy-ish nature of the figure… this limitation is always a huge pet peeve of mine on a toy, as perfectly parallel feet look weird and unnatural, and also affect the figure’s ability to balance. 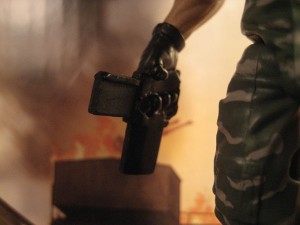 Adding to the issues with Roadblock are his hand, which is sculpted holding a non-removable “battle kata” handle which can be used to plug in either of his play action weapons. Sculpted weapons always suck; they’re cheap looking and drastically limit a toy’s playability, and that is really seen here. Not only are Roadblock’s clip-on weapons clunky and oversized but they don’t stay in place on the clip in his hand well at all. Without these pieces in hand, Roadblock looks awkward, and he looks just as ridiculous wielding his giant cannon (which also add undue stress to his wrist peg, even with the shoulder mount in place), so overall the play action fails miserably and really detracts from what could have been a good figure. The Series Two Roadblock will feature a better articulation pattern, a more movie-accurate uniform and no inhibiting play action, so I would strongly suggest waiting for that far superior figure to get your Roadblock fix. 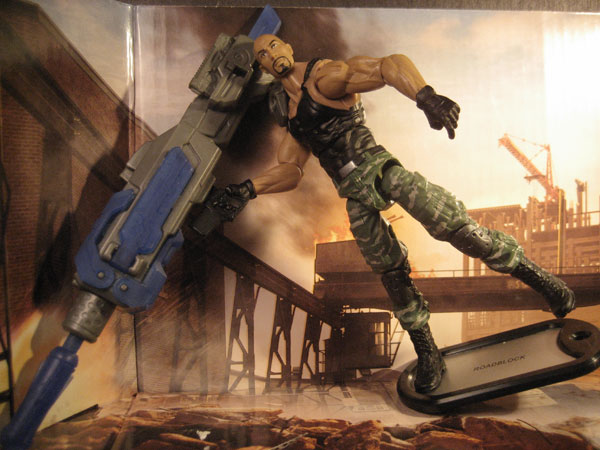 Snake Eyes and Storm Shadow fare better than Roadblock, although each have some issues. Based on movie concept designs, these figures aren’t 100% movie accurate (those will be taken care of in future assortments), but they’re both unique enough to stand apart from past versions and each sport some decent accessories. 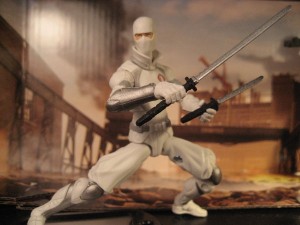 Storm Shadow includes two swords and a very concise sheath that clips onto his back. Snake Eyes sports two cool looking guns and a sword, but features no holsters or sheaths for any of his gear. Both ninjas include standard 25th articulation, with added rocker ankles which some fans will surely love but which I quite frankly could care less about– while the side-to-side range of this joint is good, the inability to twist the ankle to the side is not a fair trade off as far as I’m concerned, leading to the same parallel foot issue plaguing Roadblock. The sculpting here is wonderful, from Storm Shadow’s futuristic armor to Snake Eye’s glossy knee and elbow pads which offset nicely from the flat pallet used for the figure’s costume. 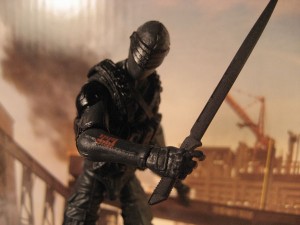 Snake Eyes also includes some great looking new webgear which blends his commando background nicely into his ninja aesthetic. I’m not sure if this is just my figure, but Snake Eyes’ knees are soft enough that mine is remarkably bow-legged, but aside from this possible design concern both figures are solid additions to any Joe collection.

Cobra Commander rounds out the set, and he’s once again conflicting. On the one hand, he looks absolutely fantastic– the new costume design in Retaliation is a wonderful real-world interpretation on the Commander’s iconic Cobra uniform, and he looks quite menacing from his detailed helmet and face plate to his armored gauntlets and boots. The all-black costume is packed with enough sculpted detail to still look interesting, even as a mostly monochromatic figure. 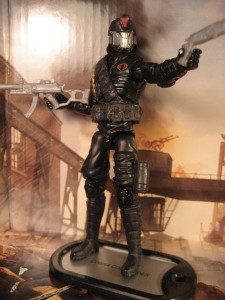 The Commander includes a pistol with a nice leg holster, as well as two rifles (the single release will also include a staff not seen here), so he looks amazing and packs some decent artillery. But once again, he suffers from limited articulation. The Cobra leader shares the single knees and no ankle pattern seen on Roadblock. These point of articulation aren’t as much a dealbreaker here, since Cobra Commander looks so good to begin with (and doesn’t have any real need to get into any zany ninja poses), but after being spoiled by five years of wonderful 25th-style articulation, the extra articulation is sorely missed here and really feels like a step backward.

I think I sound overly critical of this set, and that’s not my intention– I actually really like the set, and I’m very much looking forward to the Retaliation line overall. But these cost-cutting tactics that have plagued many of Hasbro’s toys this year can lead to a concerning slippery slope– when the upcoming discount store Joes feature more articulation, stands and just as many weapons as the “main line” movie figures, that seems like a problem. And while I would love to keep supporting Hasbro’s Joe line in any iteration, I feel it is just as important that we as fans of this long-running series hold the designers to the fire to not sacrifice the quality we all know they are capable of in the face of saving the company some money. I’m willing to concede a few high-quality trappings on my mass-market toys here and there, but some of what we’ve seen in the Retaliation line (like the insultingly bad vehicle drivers) is unacceptable, and I know full well Hasbro can do much better.

Amazon has the Retaliation 4-pack in stock now– CLICK HERE and order your set today. 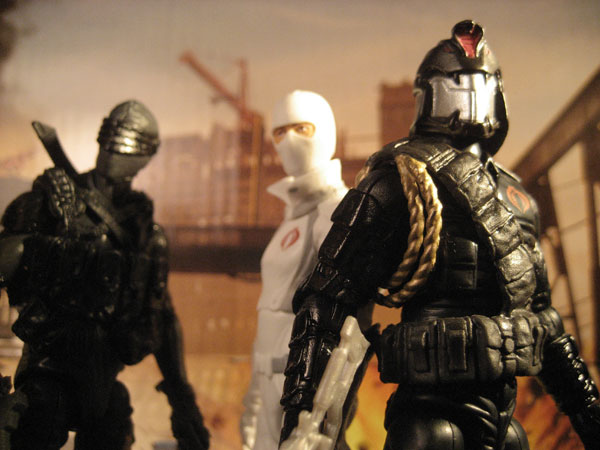 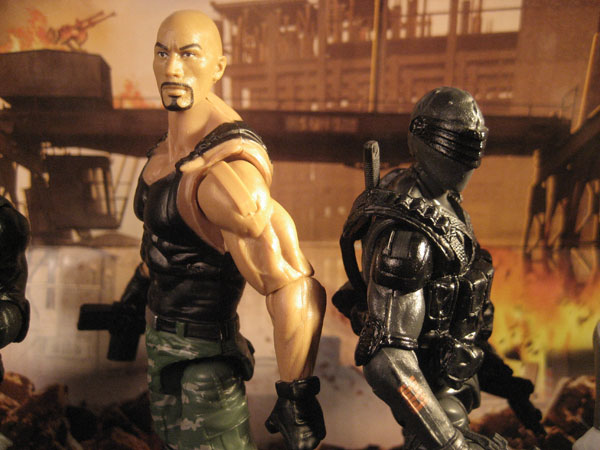 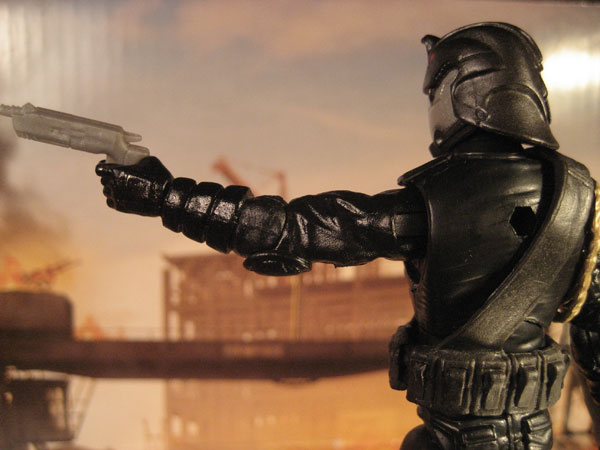 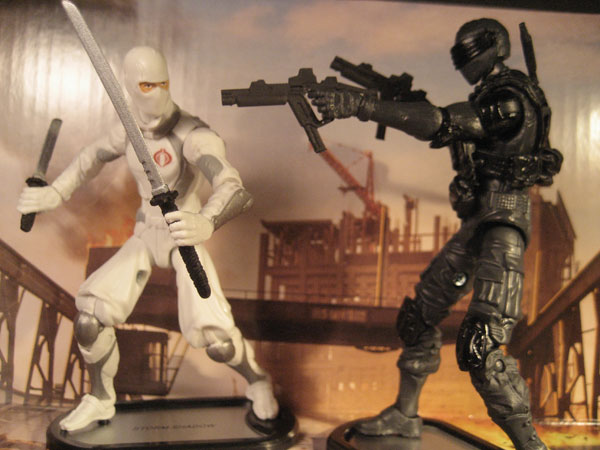