AMC Is Bringing A. Zombie To The National Conventions 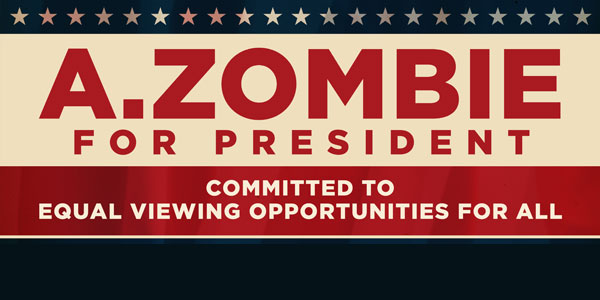 AMC stages an undead Presidential campaign… and plans to attend the Republican and Democratic National Conventions!

I have to say AMC has been pretty creative in their ongoing DISH Network campaign. What started as simple, dull messages saying “Hey, you like our shows– tell DISH to pick us up again or you can’t watch our shows!” has since turned into some weird and wild PR stunts.

The latest is A. Zombie, touted as the first undead Presidential candidate (although far from the first non-living person to potentially win office).  A. Zombie is said to be a one-issue candidate, intent on rallying DISH subscribers to find an alternate source of TV consumption by October, so as to watch the third season premiere of The Walking Dead.

While the DISH dispute seems like it’s beating a (un?)dead horse at this point, AMC’s stunts have been amusing, and I kind of love the idea of a guy in legit Walking Dead-style zombie makeup rallying on site at both National Conventions.

Here’s AMC’s whole release on the A. Zombie campaign… if he stops in your town, be sure to say “Down with DISH” or whatever:

New York, NY — August 20, 2012 – The 2012 Presidential race is about to get more lively thanks to something quite dead – the news that A. Zombie, America’s first Zombie Presidential candidate, is entering the race.

A formidable third party contender for the nation’s highest office, A. Zombie is slated to announce his candidacy at a high-energy rally on Monday, August 20th at Westfield Horton Plaza in San Diego. The candidate and his human wife, Patty Morgan-Zombie, will then commence a cross-country bus tour that will take them to six major U.S. cities including Tampa and Charlotte, where they will bring their pro-zombie message to the Republican and Democratic Conventions.

“My husband is someone who has dedicated his life and his afterlife to bringing equal viewing opportunities to all Americans,” said Mrs. Zombie. He’s the right man to lead the fight to bring zombies to everyone in America, and he won’t stop — even if it kills him, again.”

The A. Zombie for President Campaign is organized by AMC Networks, home to AMC, WE tv, IFC and Sundance Channel. Satellite company DISH dropped these networks earlier this year because of an unrelated lawsuit and is now in the disadvantaged position of being the nation’s only major television provider without these channels and their popular shows.

A one-issue candidate, A. Zombie’s mission is to rally zombie fans around the country who don’t have access to these networks and shows to find an alternative television provider before the highly-anticipated third season premiere on October 14, 2012 of A. Zombie’s favorite show, AMC’s The Walking Dead, the most watched basic cable scripted drama series among DISH subscribers, according to the Nielsen company. 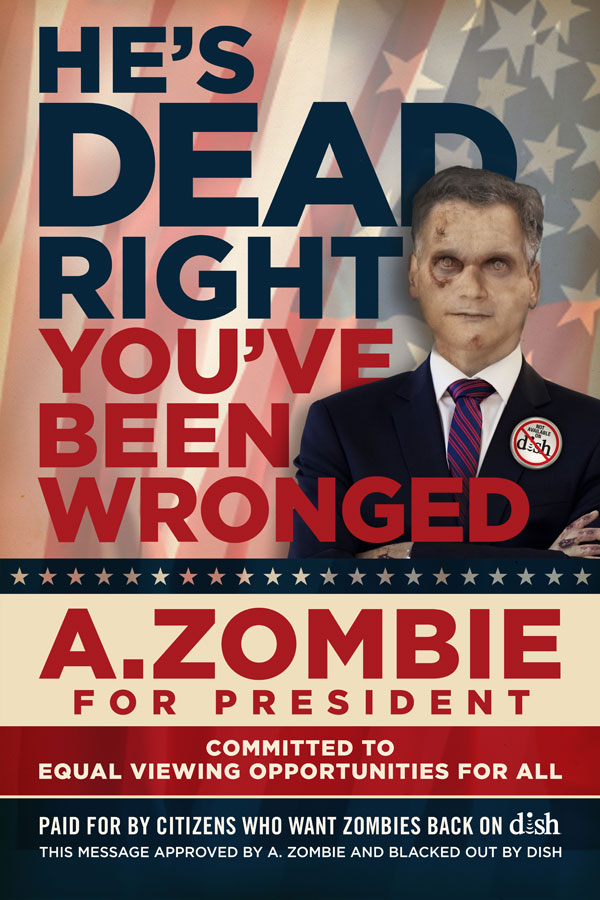