AMC Gets Official About Preacher: The TV Series 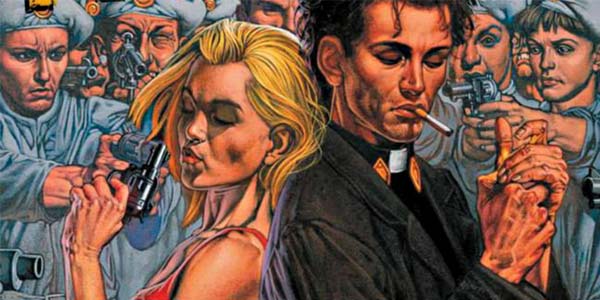 AMC’s Preacher TV series is officially that much closer to a reality.

It’s been unofficial since November, but now AMC has for real, really announced they’re moving forward with their Preacher TV adaptation.  More specifically, Seth Rogen and Evan Goldberg will be producing the show, while Breaking Bad‘s Sam Catlin will serve as showrunner.

I love Preacher… it’s easily one of the best comics of the 90s, and while I never would have thought to pick Rogen and Goldberg for this adaptation, they actually seem kind of perfect.  After all, the duo wrote last year’s not entirely dissimilar This Is The End, and based on their past work, they’re more than capable of juggling comedy, horror, vulgarity and strong characters… all of which Preacher will have in spades.

“This is amazing! We’ve tried for seven years to work on Preacher and we’re so psyched AMC is finally letting us. It is our favorite comic of all time, and we’re going to do everything we can to do it right. Humperdoo!” Rogen and Goldberg said in a joint statement.

Apparently, there was a considerable bidding war between networks over this, and while I don’t have nearly the faith in AMC that I used to, Sam Catlin’s involvement seems like another good sign.  The Breaking Bad vet has dealt with this network before, so hopefully he will be able to push back whatever bad ideas they bring to the table (the way Matthew Weiner and Vince Gilligan have done), instead of rolling with the suits’ demands, like we’ve seen happen again and again with The Walking Dead.

AMC non withstanding, this seems like a good crew to build the foundation of what could be one hell of a great series.  After so many failed or abandoned attempts, I can’t wait to finally see Preacher make its way to a new medium!