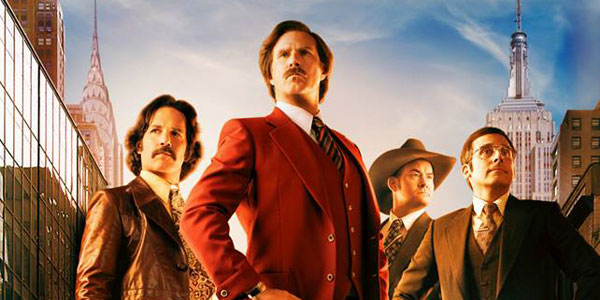 Comedy sequels are one of the trickiest movies to pull off.  They run into the constant danger of simply repeating what worked in the first movie, while adding nothing new to the equation.  The best thing Anchorman 2: The Legend Continues manages to do is keep our continuing tale of Ron Burgundy feeling fresh from start to finish.  Yes, the new movie treads some familiar territory– we follow the anchorman through a rollercoaster series or rises and falls in the new installment, adding hammy pathos to the plot of the first film, but we also get treated to a new story loaded with lightly pointed commentary on the modern age of news media, and plenty of opportunities for these great characters, old and new, to shine.

The labyrinthine story begins as Burgundy and his now wife Veronica Corningstone (Christina Applegate) relocated to New York City, sharing the news desk just as Veronica gets her big break taking over the prime time desk from iconic newsman Mack Harken (Harrison Ford).  As his wife lands the gig of a lifetime, Burgundy is fired, washing up once more in San Diego.

But this is not the end for Ron Burgundy– he quickly gets a new offer, as an anchor on GNN, the world’s first 24 hour news network, and he gets the old team back together and returns to NYC to continue his great legacy, striking lightning as his team basically invents “soft” journalism, featuring pointless feel-good stories and focusing on non-essential scandals and other sensationalist journalistic crap.

I won’t give away more of the plot’s twists and turns from there, but I will say having Ron Burgundy be the grandfather of the banal non-news and the ham-fisted, smothering focus on a single story so often featured today on every news network is a genius move.  Once Burgundy and his crew begin to connect with their nationwide audience– through a series of reaction shots of aggreeable salt of the earth viewers watching his softball stories– the sequel really comes to life.  Things never get very heavy or deep (depth plus Burgundy obvious would never mesh well) but McKay and Ferrell’s script lands a lot of awesome jabs at the modern state of journalism, the control of information by the tycoons who run the major news outlets, and our penchant to focus on the titillating, needless and exploitative news coverage in which we are all saturated today.

It’s great to see Burgundy again, and Ferrell appears just as excited about the character as we are.  Obviously, in spite of his trials and tribulations, Burgundy isn’t a guy who’s going to grow or change, but Ferrel plays the hell out of the anchorman’s hammy melodrama.  Equally welcome to see are his old news team, joining him again in GNN.  Brian Fantana, Champ Kind and Brick Tamland all get plenty of moments to shine.  Once again Brick steals the show, thanks in a large part to newcomer Kristen Wiig as Chani, the female version of Brick’s awkward neuroses come to life.  The bizarre romance of the two never dominates the movie, but provides a sweetly bizarre sub plot that feels perfect for the characters and this ever-strange universe.

Applegate’s Veronica doesn’t get as much to do this time out, mostly by virtue of the story being told, but other newcomers such as Meagan Good’s Linda Jackson, the programming manager at GNN who falls victim to Burgundy’s unorthodox charms, and Dylan Baker’s sleazy yet determined talent coordinator feel right at home in this universe.

Our new “villains” are pretty solid, too.  Josh Lawson stays in the background as the Rupert Murdoch surrogate who founded– and then influences– GNN’s content.  But James Marsden truly revels in his classic 80s bad guy Jack Lime, a cocky newsman from Chicago taken in as GNN’s first golden boy.  His bullying behavior toward Burgundy feels perfect, as does his own fall from grace by Ron’s success.

I’m incredibly glad that Anchorman 2 remains very much its own thing, rarely opting to rehash a gag from the original.  When it does retread, though, it does it with an amazing sense of escalation that feels as meta-funny as it is outright hilarious.  Everything culminates in a new version of the news team street war, and if you loved the scene in the original, this new version ups the ante perfectly.  The cameos are more outrageous, the action bigger and even more unwieldy, and the sources this fight skewers are even more diverse.  It also relates directly back to the new journalism which Burgundy himself created– his competition has become even more hacky and nonsensical than him, grounding the entire surreal sequence by tying back to the movie’s central theme and directly to our hero.

There are laughs throughout Anchorman 2, and McKay and Ferrell found the perfect balance between side-splitting belly laughs, nostalgic chuckles, and quick snickers.  It leaves the movie running at a consistently funny and well paced clip, never getting dull nor overwhelming us with too many gags piled right on top of one another (until the news team battle, which left me literally breathless from laughing).  McKay and Ferrell have managed to pull off this comedy sequel, making a movie that confidently stands shoulder to shoulder with their original cult classic.  There’s enough similarity for Anchorman 2 to feel right at home in this incredible world of would-be media giants, but we get the right mix of new elements to keep the movie feeling totally fresh and never a slog, despite its meta-comedy bloat.  I can’t wait to see this movie again, especially a double feature of both installments of Burgundy’s legend, back to back!