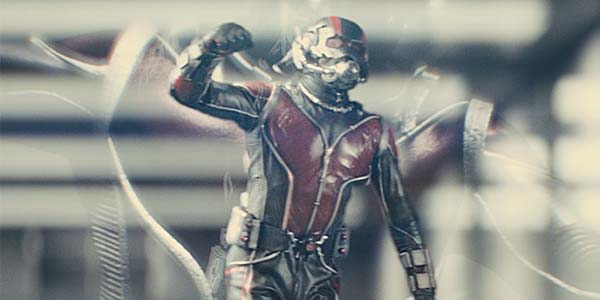 One of the oldest– and rockiest– Marvel Studios projects is finally officially underway.

Marvel’s Ant-Man has been in the works since way before The Avengers, with the amazing Edgar Wright slowly developing his take on the size-shifting hero, until he left the film earlier this year citing “creative differences” with Marvel.  With the director leaving in the eleventh hour, it seemed like the production might bottom out completely.

But Marvel was able to get some solid talent to jump on board, namely Adam McKay to punch up the latest script, and Peyton Reed to direct.  While not the auteur that is Edgar Wright, Reed is a very skilled director, and I think he will prove more than capable with Ant-Man.

I bring all this old news up now because Ant-Man is finally officially filming.  It’s been a long, strange road to get here, but that road and the movie itself are now a reality.  I’m still bummed out that Wright’s vision of the film will never see the light of day, but I’m hopeful that what we get instead will still be a fun ride next July.

Marvel Studios issued a press release about the cameras rolling, and it included a few other interesting things… John Slattery is listed among the cast, which means I guess a slightly older Howard Stark will play into the movie, most likely as a contemporary of Michael Douglas’ Hank Pym.  I also had no idea Ant-Man would be marking the Marvel debuts of both Michael Pena and Judy Greer… this is exciting news because not only are they both great actors, they’ve proven incredibly capable of playing hilariously funny and seriously dramatic, sometimes in the very same role.  I have a feeling their comedic chops will get a work out on Ant-Man.

Here’s the whole press release from Marvel… are you as hopeful as I am for Ant-Man?  Or do you think Marvel should have pulled the plug after Wright left?

Marvel Studios began principal photography today in San Francisco, California, on its newest Super Hero franchise Marvel’s “Ant-Man.” The film brings one of Marvel comics’ original founding members of The Avengers into the Marvel Cinematic Universe. The production also shoots on location in Atlanta, Georgia, which serves as the base for the film’s production.

Set for release in the United States on July 17, 2015, the film is directed by Peyton Reed (“Bring it On,” “The Break-Up”) and stars Paul Rudd (“I Love You Man,” “Role Models”) as Scott Lang aka Ant-Man, and Michael Douglas (“Behind The Candelabra,” “Wall Street”) as his mentor Dr. Hank Pym and Evangeline Lilly (“The Hobbit: The Desolation of Smaug,” “Lost”) as Hope Van Dyne, daughter of Hank Pym.

Armed with the astonishing ability to shrink in scale but increase in strength, con-man Scott Lang (Paul Rudd) must embrace his inner-hero and help his mentor, Dr. Hank Pym (Michael Douglas), protect the secret behind his spectacular Ant-Man suit from a new generation of towering threats. Against seemingly insurmountable obstacles, Pym and Lang must plan and pull off a heist that will save the world.

Marvel Studios continued its unprecedented success in 2014 with more record-breaking films including the #1 releases of Marvel’s “Captain America: The Winter Soldier,” which recorded the largest April opening of all time at $95 million and Marvel’s “Guardians of the Galaxy,” which recorded the largest August opening of all time with $94.1 million. Both films were the #1 film in the world when they were released on April 4, 2014 and August 1, 2014, respectively.

In 2012 the studio produced the critically acclaimed “Marvel’s The Avengers,” which set the all-time, domestic 3-day weekend box office record at $207.4 million. The film, which shattered both domestic and international box office records, is Disney’s highest-grossing global and domestic release of all time and marked the studio’s fifth film to gross more than $1 billion worldwide.

In the summer of 2008, Marvel produced the summer blockbuster movies Marvel’s “Iron Man” and Marvel’s “The Incredible Hulk.” Marvel’s “Iron Man,” in which Robert Downey Jr. originally donned the Super Hero’s powerful armor and starred alongside co-stars Terrence Howard, Jeff Bridges, Shaun Toub and Gwyneth Paltrow, was released May 2, 2008, and was an immediate box office success.

Garnering the number one position for two weeks in a row, the film brought in over $100 million in its opening weekend. On June 13, 2008, Marvel released Marvel’s “The Incredible Hulk,” marking its second number one opener of that summer.