ANT-MAN AND THE WASP Starts Production 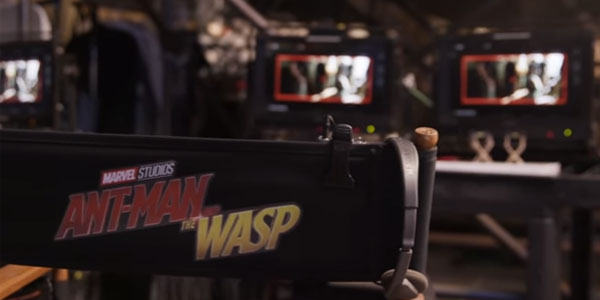 Marvel Studios makes a fun “little” announcement about their next big movie.

We’re a little less than a year away from ANT-MAN AND THE WASP, and today Marvel confirmed production on Peyton Reed’s sequel is officially underway.  To commemorate the occasion, they shared a fun video:

So I guess the silliness that was a major part of what made ANT-MAN so entertaining will be making a comeback, along with Paul Rudd, Evangeline Lilly, Michael Douglas and Michael Pena… so great news!

Can anyone make out what’s going on in the monitors in this video? A dude in a black suit for sure… but are there ant-sized easter eggs hiding in those screens?

While we ponder and strain our eyes, you can read a super-vague description of the sequel below:

From the Marvel Cinematic Universe comes a new chapter featuring heroes with the astonishing ability to shrink: “Ant-Man and The Wasp.” In the aftermath of “Captain America: Civil War,” Scott Lang (Rudd) grapples with the consequences of his choices as both a Super Hero and a father. As he struggles to rebalance his home life with his responsibilities as Ant-Man, he’s confronted by Hope van Dyne (Lilly) and Dr. Hank Pym (Douglas) with an urgent new mission. Scott must once again put on the suit and learn to fight alongside The Wasp as the team works together to uncover secrets from their past.