Arcana Studio and Shout! Factory, a multi-platform media company, today announced the casting of Golden Globe-winning actor Ron Perlman (Fantastic Beasts and Where to Find Them, Hellboy) and Oscar®-winning actor Christopher Plummer (Beginners, Up) in the upcoming animated film HOWARD LOVECRAFT AND THE FROZEN KINGDOM. Perlman is set to voice the role of Shoggoth, and Plummer has been cast in the role of Dr. Herbert West. 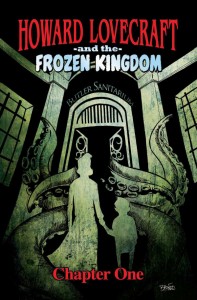 Written, being directed and produced by Sean Patrick O’Reilly, HOWARD LOVECRAFT AND THE FROZEN KINGDOM is the highly-anticipated movie adaption of Arcana’s popular graphic novel of the same name, and introduces a new generation to the imaginative Lovecraft universe through a fantastical, cinematic adventure that entwines new storytelling, events of H.P. Lovecraft’s life, iconic elements of his writings and more!

A fun and thrilling animated feature for any Lovecraft fan, HOWARD LOVECRAFT AND THE FROZEN KINGDOM is slated for a fall 2016 release across major entertainment distribution platforms and in packaged media from Shout! Factory.