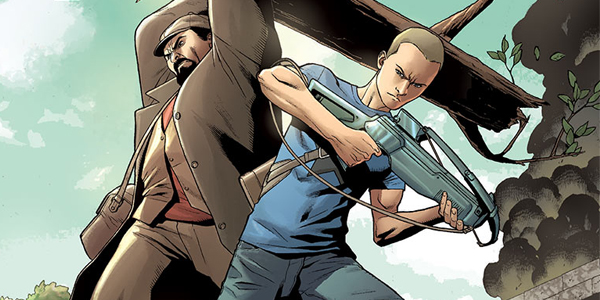 Here we are less than one week away from the release of Archer & Armstrong #1, effectively wrapping up Valiant’s initial run of newly launched titles and the first step of their well-executed comeback.  Thus far, X-O Manowar, Harbinger, and Bloodshot have been presented in a way that maintains their brilliant core structure while stylistically updating their narratives and general aesthetic with a modern flair.  Archer & Armstrong is, predictably, no exception and even delivers a much-needed dose of camp and humor into the mix. 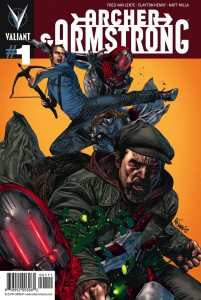 Penned by Fred Van Lente, the story kicks off with a prologue some ten-thousand years ago in Mesopotamia’s city-state of Ur as we witness a world-altering apocalyptic event (complimented by metaphorical text from the book of Genesis)…and things only get weirder from there.  By the time we meet our first protagonist, Obadiah Archer, in present day Ohio, Van Lente has already displayed a penchant for satire.  After overhearing an overweight family’s conversation regarding the importance of multiple lunches and the educational value of the attractions at Promised Land (a hilariously groan-inducing Christian-inspired theme park), we find Archer located within said park displaying his talents in various forms of martial arts while training inside of a scale replica of Noah’s fabled ark.  Privately schooled and tasked with a mission by a secret order called The Dominion to seek out and kill an unnamed target, Archer tracks his victim to a New York bar with the help of a mythical device (whose origins are later revealed).  When he moves to engage him, however, it becomes suddenly apparent that there are other, unforeseen forces at work and the story really comes into its own.

Keeping with the book’s subtle parodistic takes on modern society, the main villain is revealed on the final page in the form of The One Percent, a secret cult that worships Mammon, the demonic embodiment of greed.  Truthfully, the issue moves along at such a quick pace that you are barely able to absorb the fun absurdity of it all.  With three books under Valiant’s belt that, while excellent, are gravely serious, it’s great to see that Archer & Armstrong is shaping up to see our adventurers in situations that are as exciting as they are wacky.  Part of the fun though will also no doubt be the continued chemistry between the characters themselves.  Although they don’t get to share a lot of dialogue in this issue after the botched assassination attempt, Van Lente does a great job at introducing both Archer, the fiercely determined and dangerous teen who has suffered a severely sheltered upbringing, and Armstrong, the hedonistic and oafish immortal with vast knowledge of the conspiracies working against them.

The artwork by Clayton Henry (with colorist Matt Milla) gels perfectly with the story as well.  Stylish and visually engaging, Henry frequently plays with interesting page compositions and dramatic action shots where the viewer is witnessing the events from a very low or high perspective.  The use of bold contrast throughout is equally excellent with a great deal of depth added in the coloring process.  The actual character designs look absolutely fantastic with Archer physically portraying a certain youthful innocence that is perfectly offset by Armstrong’s larger-than-life physique and persona.  I certainly hope to see more of The One Percent’s shock troops who, while only showing up in a couple panels, command such a powerful presence if only for there amazing-looking costumes.  The suited aristocrats that make up The One Percent also benefit from memorable designs while adorned with golden masks resembling the heads of bulls and bears.  Much like the story it mirrors, the artwork displays a sensible balance between intensity and lightheartedness.

This is shaping up to be yet another success for Valiant and a welcome addition to their growing universe. Be sure to check out Archer & Armstrong #1 this Thursday, August 8th and, if you haven’t already, catch up on the other incredible series they’ve introduced this summer.  Valiant is back in a big way and, with Shadowman dropping this November likely followed by a wealth of yet-to-be-announced franchises, they’ve only just begun to tap their potential.

Check out a preview of the books prologue pages as follows: 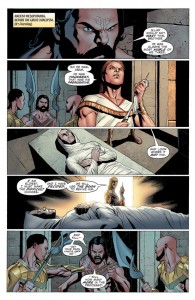 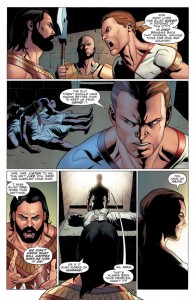 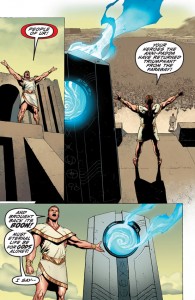 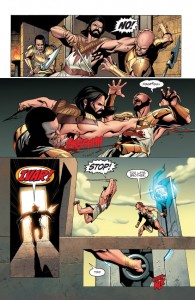 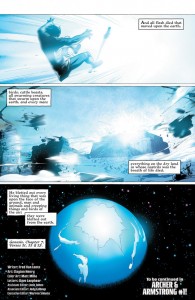 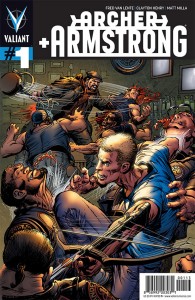 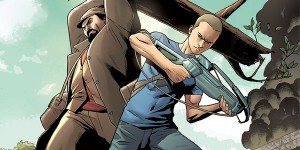