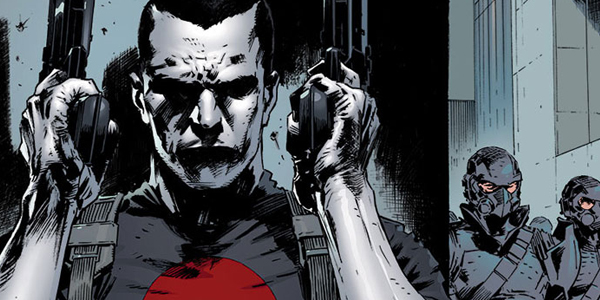 Following up last week’s intense chapter of Shadowman, Valiant Entertainment delivers new issues of Archer & Armstrong and Bloodshot – two of the most incredible and unique series on the market.  There’s a reason Valiant has been getting heaps of critical acclaim (Archer & Armstrong is even nominated for book of the year over at IGN) and, if you haven’t started reading their catalogue, you’re absolutely failing yourself.

In Archer & Armstrong #5, writer Fred Van Lente continues to balance humor, drama, and over-the-top action like no one else.  This series has been an absolute joy to read and remains one of the books I most anticipate picking up each month.  With its brilliant script, quirky cast of characters, and consistently amazing artwork, you just can’t help but wear a grin from ear to ear while you read it.  When we last left off, Archer had averted disaster by disabling the all-powerful device known as The Boon but, in the process, inadvertently (and hilariously) kills a Geomancer that the Sect had kidnapped.  It is soon revealed that Gilad, Armstrong’s younger brother who we last saw dead on a slab, is indeed much more alive than we had believed.  In fact, he has functioned for centuries as the Eternal Warrior — the fist and steel, sworn protector of Earth’s Geomancers.  Now, the untimely passing of the Geomancer from last month’s book has triggered The Eternal Warrior to spring into action, seeking vengeance against the guilty party.  Accident or not, Gilad has his sights set on Archer, and he always gets his man.

One of the things that makes Archer & Armstrong a truly exceptional book is the wonderful chemistry between the characters.  The interactions that we’ve seen our adventurous duo share range from comedic to downright touching.  Similarly, in this issue, we really get a feel for the history of sibling rivalry between Armstrong and Gilad Anni-Padda.  While the Eternal Warrior criticizes Armstrong for wasting his life as a hedonistic pleasure-seeker, Armstrong views his brother as a mindless butcher.  The tension escalates quickly and culminates with a knock-down drag-out brawl for the ages.  Perfectly paced and expertly written, this series shows no signs of slowing down.  Also, taking over for Clayton Henry for this arc is Italian artist Emanuela Lupacchino, whose work is a sight to behold.  Valiant has been outstanding with pairing their talented creators with books that compliment their styles and this is no exception – Archer & Armstrong #5’s pages are just one beautiful composition after another.  Pick it up and remember to cast your vote to make it “Comic Book of the Year” on IGN’s poll.  It deserves the recognition.

Then we have Bloodshot #6 and holy shit, this issue is insane.  In last month’s entry, the series’ signature wanton violence took a brief respite to establish the creative and well-executed infiltration into Project Rising Spirit’s base of operation.  Now inside, Bloodshot, Kara, and Melissa/Pulse all find themselves in separated and in dangerous situations.  While Melissa is re-introduced to a painful reminder of her past, Kara attempts to disable PRS’s head of security.  All the while, Bloodshot has to contend with Chainsaw, an elite group of genetically engineered abominations out to put him down before he can reach the lower levels of the facility. What ensues is a breathtaking display of pulse-pounding action and outright badassery.

Duane Swiercynski’s writing sets a breakneck pace for the book and, as much as I’d like to equate it to a blockbuster action movie, I think this issue reminded me more of an awesome video game just waiting to be made.  Readers will witness Bloodshot absorbing unbelievable amounts of damage as he fights his way through multiple levels of a veritable fortress to battle paramilitary monsters, all while quipping snappy one-liners and discussing tactical strategy with the mental projection of the nanites in his bloodstream!?  If this book doesn’t have you on the constant edge of your seat, check your pulse.

Brought to life by the consistently fantastic art of Manuel Garcia, Bloodshot is a stunning work of science fiction whose relentless action and brilliant storyline make it one of the best books on shelves today.  Just wait until you see the cliffhanger ending, which seems to play directly into this Spring’s upcoming Harbinger Wars crossover.  Check out sample pages from both issues and the (always) beautiful covers below.