Arrow/ Flash Crossover Episode Pretty Much a Sure Thing 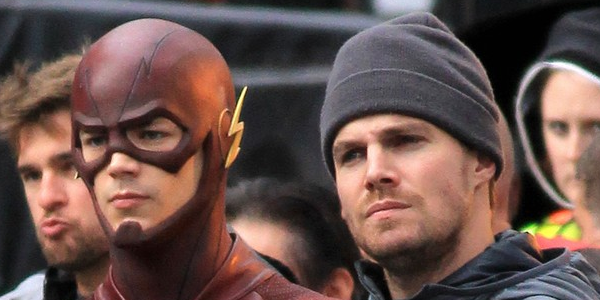 Curious who would win in an all out fight between The Flash and The Arrow? You may be finding out sooner than you think. 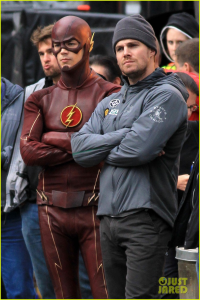 The folks over at Just Jared have a few new shots featuring the Scarlet Speedster and Emerald Archer locked in a battle that could be taking place in a future episode. Flash star Grant Gustin and Arrow star Stephen Amell stood by on the Vancouver set to watch their body doubles rehearse a fight likely to happen in a crossover episode pretty early in the season. Judging from the crew jackets, it’s likely that the episode the photos came from may be during the Arrow run, rather than the Flash. At this time, it’s unknown what the context of this epic (or possibly not) brawl is, but looking at the pictures you get the impression that Oliver seems to be winning, yeah?

Regardless of how red or green your flag is, you’ll be able to catch both the Flash and Arrow sharing some screen-time in the eighth episode of both series coming seasons (according to FlickeringMyth.com). 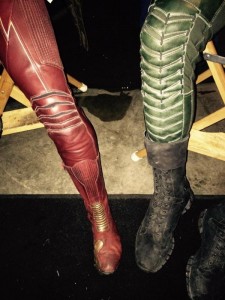 This information was prefaced by a teaser image posted on Arrow star Stephen Amell’s Twitter feed, proving not only that a crossover was going to happen in the coming season, but that filming was already underway.

But fans won’t have to wait long to get their Arrow and Flash fix as both series are set to debut soon, with Flash happening first Tuesday October 7th and Arrow airing the following day Wednesday October 8th on the CW.  But if you’re looking to stay up to date, DC Digital comics are available on the official site.  Flash Season Zero and Arrow Season 2.5 issues #1 and #2 are available now for only 99 cents.  Both series are written by the respective show-runners, and will lead in to the season premieres airing soon.  New issues are being released every other Monday.

In the meantime, Stay fast, stay sharp, and stay tuned to Kastor’s Korner for more news, articles, and reviews on all the latest and greatest comics, shows, toys, and movies coming to the shelves and screens near you.