Assassin’s Creed Trailer brings the game to life, but what does that mean exactly? 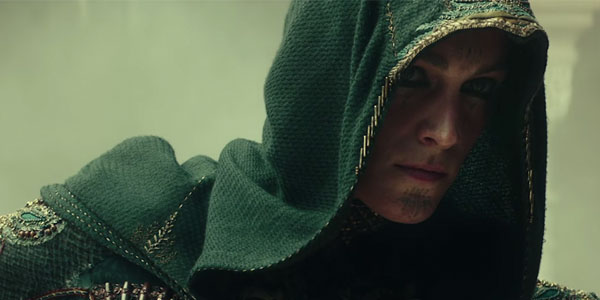 The Assassin’s Creed games have built an incredible mythos, and Fox’s (in conjunction witih Ubisoft) new movie is dead set on expanding on the war between the Assassins and the Templars.

Assassin’s Creed has become an instantly recognizable IP in just 10 years.  In gaming terms, that’s actually only one console generation ago; which I suppose it could be argued that it’s owed more to the modern age of information rather than mass appeal.  The games take place in an alternate present where a large company called Abstergo is the new public face of the mysterious group The Knights Templar.  Their goal is to bring order to the world, at any cost; a mission opposed for almost 2000 years by the brotherhood of the Order of Assassins.  Every major historical event since the crusades has been provided either a match or a powder-keg by the shadow war between the Templars and the Assassins.  There’re a few things to note about the war that complicates the narrative of the game and possibly the movie.  These aspects might end up being even more important to capturing the spirit than guys in hoods doing parkour and stabbing people in the throat.  So here are three important pieces of information about the shadow war between the Assassins and the Templars at the time the story of the movie is evidentially taking place.

1: The Assassins are nearly wiped out.  In the year 2000, a Templar sleeper agent killed the Assassin Mentor (leader), before revealing the locations of various Assassin compounds to Abstergo.  This lead to The Great Purge, an operation in which multiple Templar hit squads stormed almost every Assassin camp, taking them by surprise.  The effects of that operation have been so devastating to the Order that even after 15 years they still haven’t recovered.  The other important aspect of this fact is that due to the operation, The Assassins were unable to continue the influence war against the Templars, meaning that Abstergo was able to easily gain full control over the American government, bolstering both their resources and influence to the coveted “too big to fail” status.

2.  The story of the Assassins & Templars goes back even further than the bible; to a time in which man was a slave race to an advanced class of beings known as the Precursors or “Those Who Came Before.”  Man revolted against the Precursors and eventually the entire civilization fell.  Over time the truth of the origin of man was forgotten, but various stories which recalled vague details became forms of myths and legends which have shaped our modern world.  The war between the Templars and Assassins centers around lost artifacts from this civilization called the Pieces of Eden.  These advanced devices have different uses ranging from causing hallucinations, expelling lightning, and even mind control.  They were designed specifically for use against humans, so the Templars are searching for them in order to streamline their domination plans.  The Assassins however are more interested in keeping them away from the Templars rather than using them.  The philosophies are completely binary.  Order VS Chaos and Oppression VS Freedom.

3.  The are still active in very small pockets all over the world, usually living in isolation on dedicated communes.  Desmond Miles, the hero from the first 5 games in the series, came from one such commune in South Dakota simple called “the Farm.” He ran away when he was 16 before completing his training and joining the Order officially.  Fully vetted members of the order are usually sent on specific destabilization missions around the world, with very simple objectives (kill a leader of a certain group, cause a blackout in a dedicated area, break in to a facility, etc.) There’s a system, but the lack of internal management causes the effectiveness of the order to suffer.  Regardless, their idealism gives them drive and that is the main force keeping the Assassins going.

Alright, so that will give you a general idea of the world the movie is set in.  So the big question, will it be good? Well, like anything else, in order to get a better idea of that, we have to look at its parts to determine their sum.

The film is produced by and starring Michael Fassbender as both Callum Lynch and the 15th century Spanish Assassin Aguilar de Nerha (Lynch’s ancestor).  Lynch goes to prison for killing a man in a barfight (unconfirmed) and is eventually put on death row and “executed.”  After his false execution he is acquired by Abstergo scientists and put in to a program by Dr. Sophia Rikkin (Marion Cotillard) in order to better understand violence at a genetic level.  The program is sponsered by the CEO of Abstergo, who is also Sophia Rikkin’s father, Alan Rikkin (Jeremy Irons.) The program is centered around a machine called the Animus.  The Animus is a complex apparatus (especially in the movie, evidentally) designed to allow subjects to relive memories of their ancestors that have been locked in to their genetic code.  Though there is a side effect of using the Animus referred to as the bleeding effect in which the subject is able to retain the abilities of the ancestor whose memories they are experiencing.  Looking at the trailer alone, and with what I know, it’s clear that that fact may very well be the downfall of the program.  Other characters include Joseph Lynch (Brendan Gleeson,) Callum’s father, Moussa (Michael Kenneth Williams,) an Assassin who interacts with Callum during his imprisonment, and Maria (Ariane Labed,) an Assassin and partner to Aguilar de Nerha and the one who pulled off that really cool double kill in the trailer.

The film is directed by Justin Kurzel (director of the Snowtown Murders and the 2015 film version of Macbeth) Based on his work in Macbeth, Kurzel seems more than capable of depicting realistic yet dynamic melee combat.  Though action depicted in Macbeth was more rooted in the emotion behind the combat, and utilized slow motion for that draw, based on what has been revealed in the trailer for Assassin’s Creed Kurzel might take the opposite route; emphasizing the efficiency behind the protagonists’ abilities as being a visual signifier of their conviction to their cause.  He has said in interviews that he was drawn to the story by the murky morality behind both of the groups and the lengths they’d both go to to achieve their goals.  He has also been very vocal about the originality behind the concept of exploring genetic memories.  Likewise, Michael Fassbender has compared the film’s concept and themes to the Matrix.  A fascinating comparison that could capitalize on the necessary moral flexibility of the film’s “heroes”

The film’s screenplay is being handled by Bill Collage, Adam Cooper, and Michael Lesslie.  Collage and Cooper have written works with similar ideas to Assassin’s Creed, including Exodus: Gods and Kings, Allegiant (of the Divergent series,) and are the creators of the ABC series Of Kings and Prophets; putting them in the sweet spot of both sword fighting and sci-fi.  Unfortunately, not a single work by either of the writers has broken a score of 70 on Metacritic.  The other writer on the project has written a few shorts and is currently in the process of writing both Assassin’s Creed and Haven to be directed by Justin Kurzel.  Besides that he wrote the screenplay to Macbeth (2015.) …but it’s Macbeth, so it’s not exactly a fresh concept.

The production and cast of the film is solid, but it’s too soon the judge how well the it will actually do.  Macbeth is a very visually arresting work that must be experienced; even if it’s for no other reason than to witness Kurzel’s ability to construct a scene.  The flashback sequences we’ve seen from Assassin’s Creed are astonishing, but there’s a sterility to what’s been seen of the modern day Abstergo scenes that disturbingly enough remind me more of the awful Fant4stic than Assassin’s Creed.  Kurzel’s and Fassbender’s insistence upon the moral ambiguity of the heroes of the film as well as the villains does introduce some thought provoking themes of the greater good and the price of freedom.  Unfortunately, the only sci-fi work the writers have been responsible for included some very cartoony Hunger Games/Battle Royale villains with not a lot of complex ideas beyond power and more power.  While I don’t doubt there is a reason the writers were picked for the project, their past works focus more on the proficiency of the flashbacks(swords and stuff), and less on the modern/futuristic Abstergo scenes.  With the director and the writers all being practiced at historical events and how they are handled, it leaves me with less faith for the amount of effort going in to the dynamism of the Abstergo aspect of the movie.

Of course, that’s alls just one person’s opinion.  A person who has not seen the movie, I might add.  If you want to check out the trailer, click here.  I’ve linked the full presentation of the trailer from Jimmy Kimmel Live.  If you haven’t seen it yet, I’d recommend it.  It’s very entertaining.

Also, Louise Blain over at Gamesradar has seen the first 15 minutes of the film, and she’s shared some insightful pieces of information about how the film is constructed.  Beware of spoilers though.

You could also check the Assassin’s Creed wiki for both the movie and the games if you want to learn more about it, including a handly timeline if you like the story but have not interest in the game.  If you’ve played the games though, there are also some events covered in the timeline that happen in the comics but are barely touched upon in the games.

For more on Assassin’s Creed and other tidbits of geek news, previews, and reviews, stay connected to Kastor’s Korner.