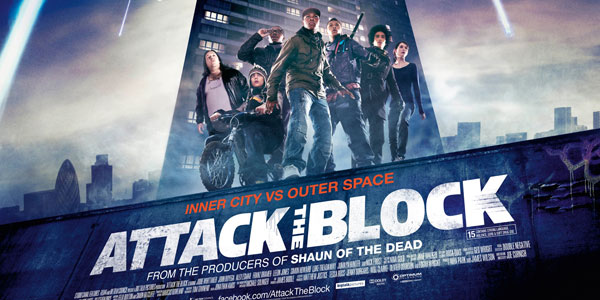 At this point, hopefully you’ve heard of Attack The Block. The incredible sci-fi/ action/ comedy from first time British director Joe Cornish hosted a panel at New York Comic Con, as well as a screening of the film at the Museum of Modern Art earlier this week. I had a chance to sit down with Joe to talk about his amazing movie, and the experience of hitting a cinematic home run on his first time out directing a feature film.

Let me start by saying I think Attack The Block is the best movie of the year. Expertly shot and edited, Attack The Block tells the story of a group of South London street kids on the forefront of an alien invasion. Rather than run and hide, the kids decide to take the fight straight to the aliens, and the result is a wild ride full of some of the best written, fully realized characters I’ve seen on the screen all year, refreshingly different aliens, and plenty of smart social commentary just below the surface.

For his part, Joe was humble and as insightful as anyone who has seen the film would expect, citing classics like Night of the Living Dead and Assault on Precinct 13 as major influences for this film, along with the great gang movies like The Warriors. What is truly amazing about Attack The Block, however, is rather than fill itself with nostalgic references to these classic movies, Cornish made a movie that actually feels like it was made at the same time– rather than an homage to the greats, Attack The Block is its own thing, both modern and timeless. A lot of this has to do with the social commentary I mentioned earlier. Joe stated he wanted to make this film mostly as a heartfelt plea toward the falsely negative depiction of lower-class kids. Much like here in America, the media tends to vilify and dehumanize the supposedly dangerous kids of South London, and Cornish, a native of the area, wanted to tell a story about them… which also just happened to feature an alien invasion. Which leads to the next element of Attack The Block which really makes it great– the aliens. If you look at sci-fi and horror movies over the past decade or so, most of the creatures look pretty similar, kind of boring, and not at all iconic. Devin Faraci at Badass Digest gave the perfect example a while back that anyone can draw ET. Or Jaws. Or King Kong. But the Cloverfield monster? It’s just not memorable. Cornish’s invading aliens bring back an iconic feel to movie monsters, with his “gorilla-wolf” beasts so black they look practically two-dimensional, and horrifying giant glowing teeth. The simple creatures are instantly memorable, have a great sense of design to them, and are more than alien enough to feel like something that doesn’t belong on this planet. On top of that, they’re also played by guys in suits! Joe said he’s bored with CGI graphics, and his love of practical special effects won the day for this film, with his hulking beasts being almost all costumes and puppets. Even these aliens have a bit of commentary behind them, essentially the embodiment of the worst hyperboles the media says about kids in London– dark, animalistic and very dangerous.

Cornish obviously put an enormous amount of thought into every aspect of his film, and once he had his initial idea he turned to his friend and Executive Producer Edgar Wright (Shaun of the Dead, Scott Pilgrim) for help. From Edgar, Joe got enough research to write the movie. I love that his research here was literally talking to kids in his neighborhood about what they would do if there was an alien invasion. The great slang-saturated accents our heroes have in the film were also derived from speaking to real life kids in the UK. Edgar taught Joe how to make a film that is a combination of “truth and bullshit”– research will provide the truth, and Joe can provide the bullshit.

Attack The Block is remarkably ambitious for a first film, filled with major action set pieces, plenty of creatures and makeup effects, pyrotechnics, night shoots and child actors… as Edgar Wright joked, Joe made this film as hard as possible to create. Joe was up for all these challenges though, and decided to go big and be as ambitious as possible– it’s not often that a film starts with their heroes doing something as heinous as robbing an innocent woman at knifepoint, but he makes it work masterfully through the redemptive character arc of the kids’ leader Moses. The bold moves taken making this film really paid off, and on top of being incredibly smart and action-packed, Attack The Block is also very entertaining. While the movie is still trickling out to select theaters, it will also be available on DVD and Blu Ray on October 28th. Joe is a big enthusiast of home cinema, and made sure there’s plenty of cool things on the home video version of his movie. From a very comprehensive making of, deleted scenes (including an Errol Flynn-inspired rooftop fight with the kids and the aliens!), and three commentaries, this disc will certainly be loaded.

It’s always the best feeling when you learn someone you’re such a fan of is also a cool person in real life, and this really holds true for Joe. He’s made my favorite movie of the year, one with lots to say while also being nearly impossibly entertaining from start to finish. If his first project turned out this good, I cannot wait to see what he’s got coming up next!