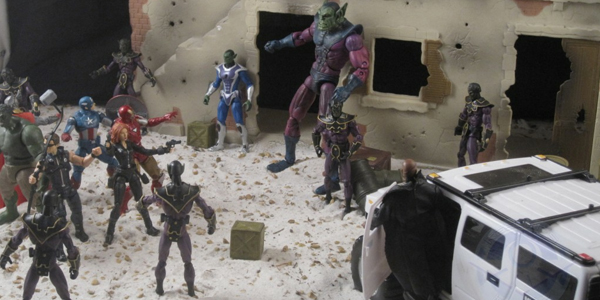 After weeks of only seeing the big name heroes from the Avengers team, the human heroes and a surprise villain are making their way to collectors in the third wave of the 3.75 scale Movie line.

In wave three Hasbro delivers “normal” human heroes from the movie, Black Widow and Hawkeye. Both figures are great toy interpretations of the actors in this scale. 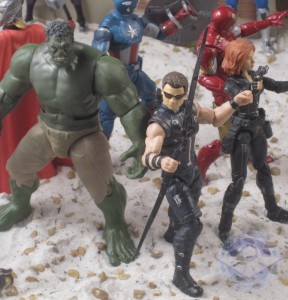 Hawkeye’s major issue is limited articulation, making dynamic poses difficult, but not impossible. Because of his bulkier body it is easier to balance the figure when putting the archer into action poses. He comes with not one but two bows, one of which can be attached to the spring action accessory. He has an additional accessory, his quiver, which can be either a positive or negative for the figure. The negative side of the quiver is made from a solid piece of plastic, making storing arrows of any kind impossible. On the other hand the strap is molded into the torso and the quiver itself is glued into the figure’s back, giving Hawkeye a more natural look and making the quiver impossible to loose. Giving Hawkeye an open quiver and/or scale accurate arrows could have made this good figure an amazing figure. 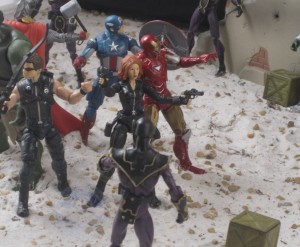 Natasha is a welcome surprise in this all-boys line. The articulation of the figure is so far the best in the Avengers movie line. In addition she also has an amazing sculpt. The former assassin is equipped with two pistols, which can be stored in her hip holsters, and an oversized spring loaded weapon. She is not without her issues. Like most females she can only rotate her head 360 degrees, making looking up at the Hulk impossible. Black Widow also has a rather slender sculpt making the plastic used for her limbs much softer than the males of the line. Down the road this could lead to warpage or tears at the joints. Those minor issues aside, she maybe one of the best figures, of either gender, to date. 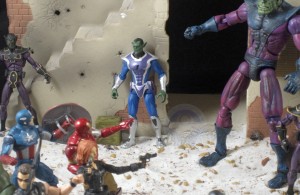 The final figure is a character that many comic fans thought would be in the movie but was not, the Skrull. This army builder was a last minute change to the wave, because the actual movie aliens were not ready to ship. This is a much different Skrull compared to the version of the alien race in the Marvel Universe line. The figure is much bulkier, and sports an all new head sculpt. The body of the figure is not overly impressive, with limited articulation and unusual color choices for the costume. The head sculpt is the real draw of this figure. Even with the issues collectors will sure to be scooping these little green men up to add to their Skrull armies.

Overall Avengers Wave 3 offers a nice change of pace after so many Iron Man, Thor, and Captain America figures have been clogging the shelves over the last two months.

Make sure to head over to Toycade to get your Avengers Movie figures today.