The debut episode of Wideload Games’ Avengers Initiative, the latest Infinity Blade-inspired action title for iOS devices, lets players assume the role of The Hulk as he smashes through friend and foe.  Set throughout various locales from urban streets to industrial complexes and even the S.H.I.E.L.D. Helicarrier, Avengers Initiative succeeds in providing an enjoyable experience on the go – whether you have five minutes to kill or five hours.

Truth be told, the main reason I checked this game out was the fact that Fred Van Lente, the guy currently writing Valiant’s excellent Archer & Armstrong comic, penned the story for it.  With the near constant combat, however, coupled with the fact that only the first episode is currently available, the story hasn’t really come into its own yet.  Nick Fury communicates operation briefings to The Hulk, who is out in the field beating the hell out of any super-villains that get in his way.  When a battle with Abomination aboard the Helicarrier causes significant property damage, Fury fears Hulk may have become a mission liability and calls on the other Avengers to take him in, leading to a short battle with Iron Man’s Hulkbuster Armor before Captain America interjects.  That’s pretty much the background narrative as it stands now as the episode is rather short and made to be played through numerous times.  I’m really looking forward to seeing what inter-weaving stories they have planned for the rest of the Avengers team (presented here with the same lineup as the film). 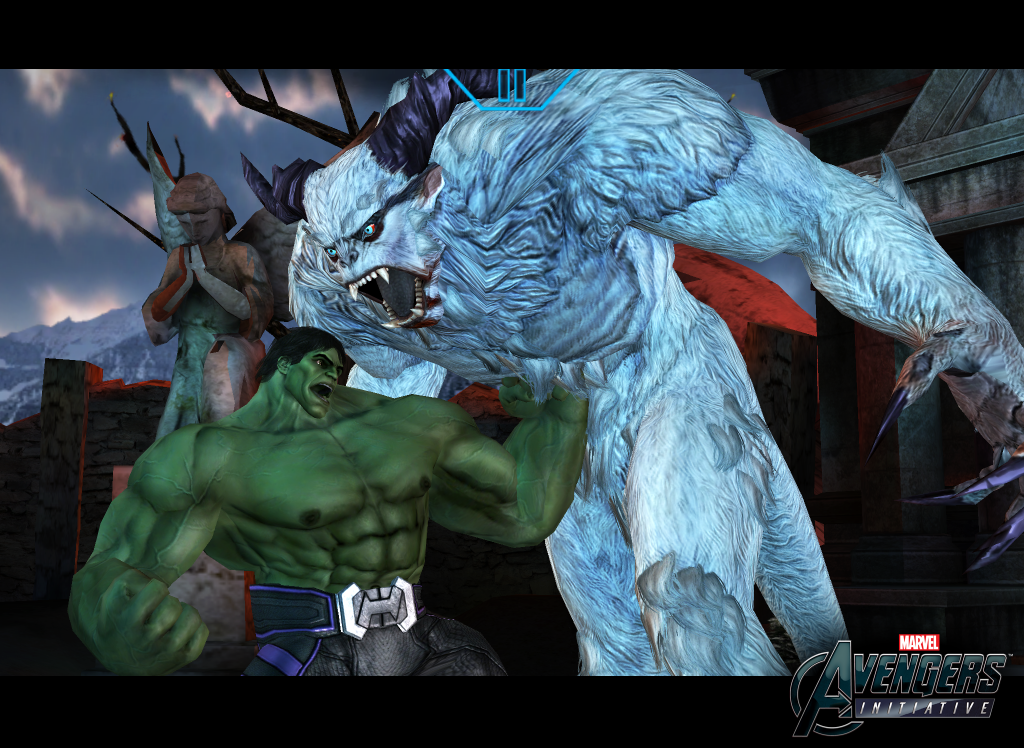 I had mentioned previously that this title borrows heavily from Infinity Blade but, fortunately there is enough innovation present here that it warrants attention from fans of Chair’s mobile brawler.  The playfield is set up in a way that gives Hulk branching paths to take but, as you don’t physically control his movement, you are limited to clicking in designated areas to order him to walk there.  On the way, you can move the camera around a bit to explore the screen and tap on any Isotope-8 you may find.  These shiny-looking rock formations serve as a kind of in-game currency and can be used to purchase health packs, additional costumes, and new combat moves.  More often than not, a Skrull or other humanoid baddie will appear to block Hulk’s projected path, causing you to do battle one-on-one in order to progress.

The actual combat sequences are the meat of the experience and are executed rather well.  Upon initiating a battle, a HUD appears with large arrows on both sides of the screen, a block button in the bottom center, life bars for both Hulk and his opponent, as well as a “rage meter” that fills during combat and allows Hulk to unleash devastating attacks.  Aside from using the arrows to dodge left and right, all fighting is performed by simply swiping your finger in specific patterns on the touch screen.  This allows Hulk to pull off quick, punishing combos with ease without resorting to a button system (which are often imprecise at best on touchscreen systems). 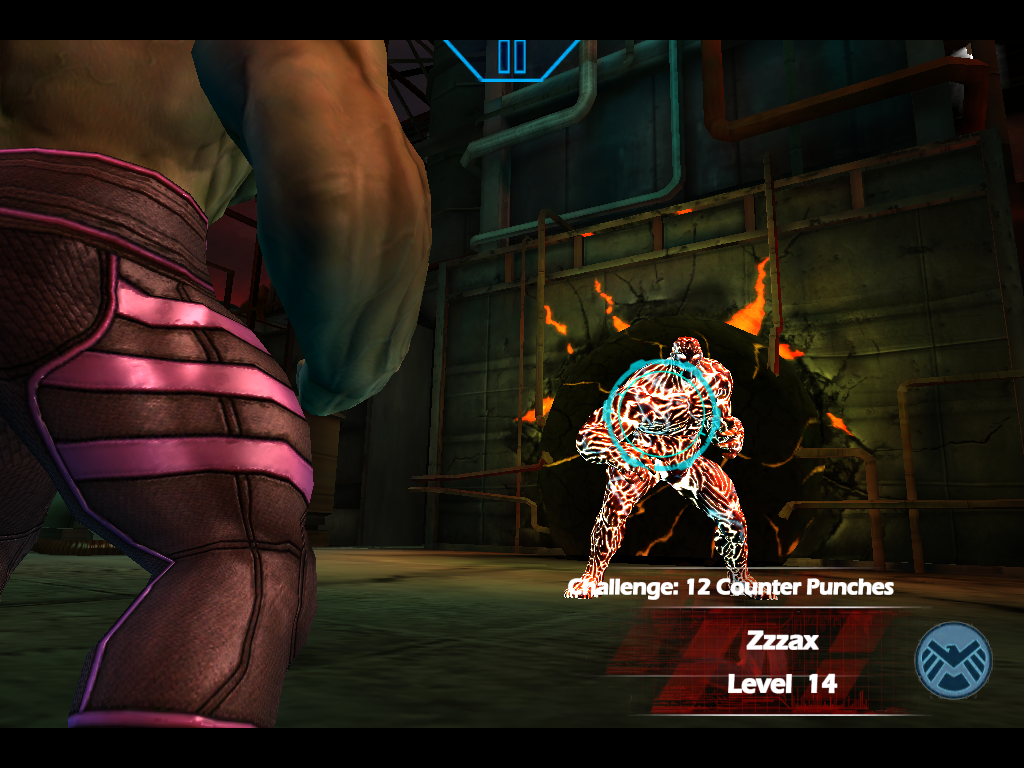 Dodging and blocking are a bit more nuanced and require careful timing in order to evade attacks and stun your foe, opening them up for a good pummeling.  While Hulk can protect himself from incoming damage by blocking, he can only guard as long as his stamina holds out.  The stamina meter can also be used to take cheap shots on an enemy even when they aren’t in a “stunned” state and can be level up along with your rage mater, damage output, and health.  Therein lies the underlying mechanic that makes Avengers Initiative work.  Every time Hulk gains enough XP to level up, he is awarded with three points to sink into one of those four categories and, in order to take on the larger bosses towards the end of the episode, you’ll need to be leveled up significantly.  Since you are all but doomed to failure on your first playthrough, the game will continue sending you back to the beginning to grind on manageable foes and continually accrue experience points.  It’s a model that can prove frustrating, but only if you forget the medium you’re playing it on.  Mobile games are best served in small portions and, since your level and progress are saved after each battle, this title makes it easy to pick up and Hulk out for a few.  Eventually, you’ll have leveled up enough to run through the entire game and will have collected enough ISO-8 to buy one of many slick new costumes (all of which grant their own specific combat bonuses) – but it’s good to know that Wideload will release additional content in the future to keep the game fresh, free of charge. 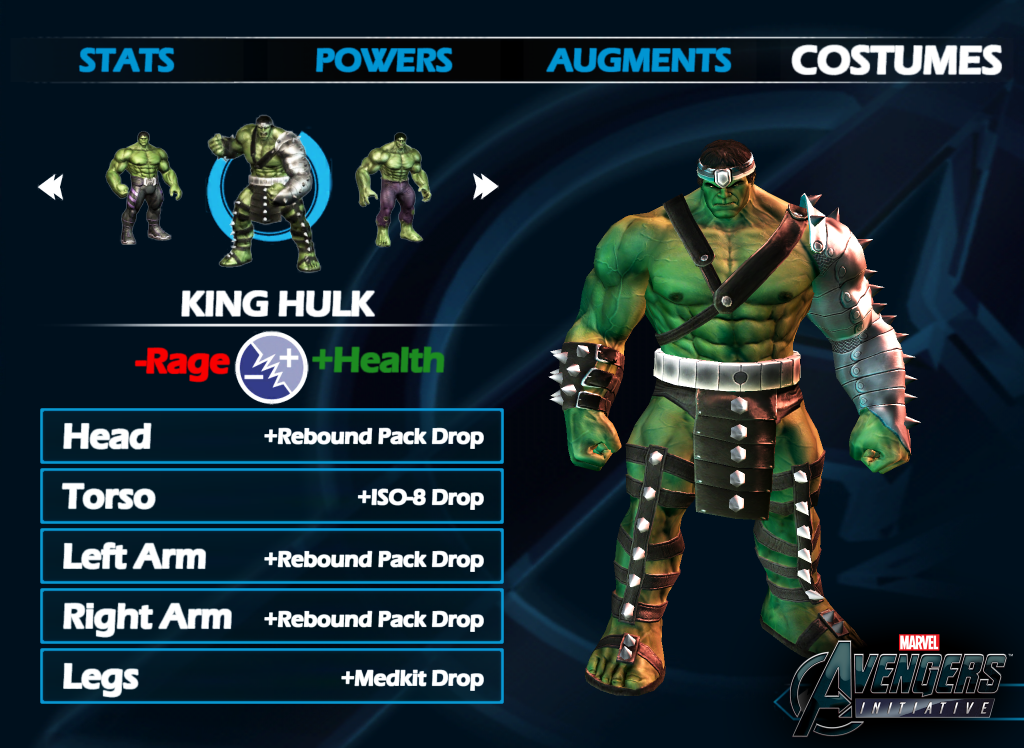 If you WANT to spend more of your hard-earned money, however, Avenger Initiative has you covered there too.  Feel like it’s taking way too long to level up and you want that gladiator-style Hulk outfit now?  You can drop anywhere from .99 cents to a whopping $50 in a single in-app purchase to acquire insane amounts of ISO-8 and spend it how you wish.  I’ll admit it, I bought five bucks worth.

Graphically, the game nails it.  The visuals are crisp and smooth throughout with some great detail on the character models.  Somewhat obscure Hulk villain Zzzax looks especially cool, with some awesome electricity effects emanating from him.  There are also some great “wow” moments when you pull off a finishing move (initiated by swiping furiously while your enemy is in a dazed, defeated state) that sees Hulk delivering a knockout blow with all the cinematic flair you could hope for.  You will hit the occasional patches of slowdown when the action heats up too much though, and the loads times can be a drag.  The audio department is also bit of a mixed bag as the score and voice acting are top notch while the sound effects during the fight scenes are often underwhelming.

Overall, it’s a solid package and better than I could have expected.  While Van Lente’s story will no doubt flesh itself out over the coming additions, it’s decidedly underplayed here in favor of all-out-action.  Still, Avengers Initiative is a worthy addition to the app store that Marvel fans and “beat-em-up” enthusiasts alike can get sucked into.  It’s currently available as a universal iOS app for $6.99.